Cosplay gives avid fans a new art form to bring their favorite characters to life. Lindley Key shares how her love of Outlander cosplaying goes beyond just the costumes and makeup.

When I was a kid, I loved to play dress up. The front closet of my family’s home in North Carolina was filled with as many costumes as there were coats. Such outfits got used on more than just Halloween. Each day, I would wake up and decide to become a new character, and whether it was a princess, space rebel or pop star, those around me were forced to play along. To this day, I continue to be grateful for those who helped encourage my imagination. It is that same imagination that led me to pursue a career in the fine arts. The love for dress up never went away. Time, however, can be cruel. As we grow up, we are told to leave such pleasures behind in childhood.

Those people who tell you that have obviously never heard of cosplay.

Cosplay, an abbreviation of “costume play,” is an art form in which fans of various media create costumes and props based on their favorite characters, whether those be from from movies, television, literature or even creations of a person’s own invention. And when I say “art form,” I truly mean it. The number of hours and money some cosplayers spend to create their masterpieces is incredible. Their dedication can be seen in each stitch, each bead, each coat of paint. As the commercialization of comic and media conventions has grown, the cosplay community has been thrust into the spotlight, and more and more people are getting involved. One can find cosplays for almost any intellectual property. Outlander is no exception. 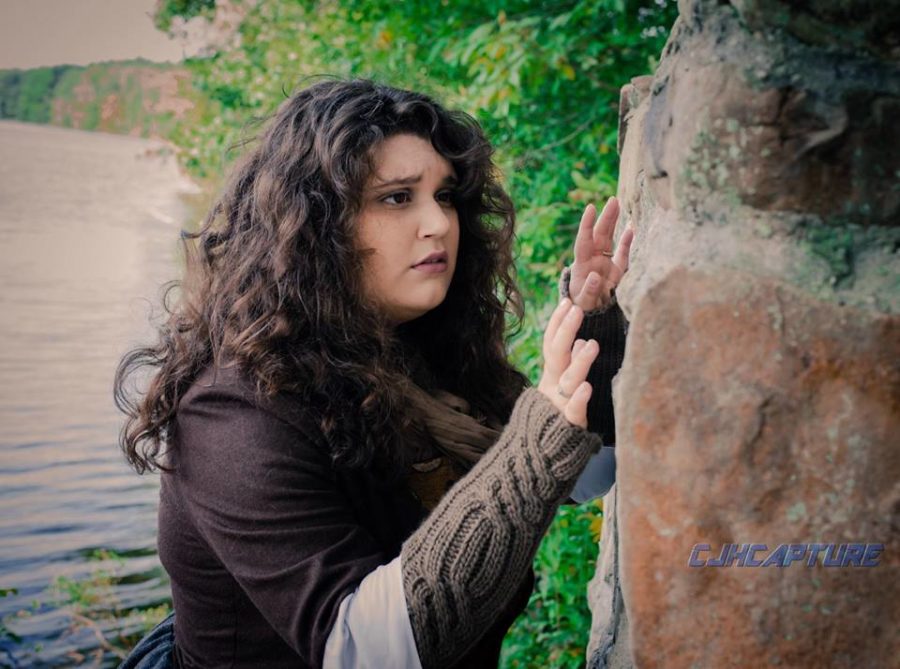 I began my cosplay journey five years ago after moving to New York. Conventions had yet to reach their popularity in the areas I had lived in previously, and the prospect of attending New York Comic Con for the first time made my mind run wild with all sorts of costume possibilities. I threw together a Scarlet Witch outfit and found a friend to fit me for Belle’s blue village dress (as much as I’ve tried, sewing has never been a talent of mine). After that first convention, I was reminded of that same joy I felt back when I was a kid. This time, however, I wasn’t just running around my room and playing make-believe. I was surrounded by a community of people just as passionate as I am about things I would have been made fun of for in the past. It was a feeling I didn’t want to lose, so I immediately began planning for next year.

For each convention, I try to bring something new to the table. Whether it’s a new character, homemade prop, or even a different costume for a character I’ve already explored. As soon as Outlander entered my life, I knew Claire Fraser was a cosplay I wanted to take on. She has so many options in regards to her time-spanning wardrobe. Original costume designer, Terry Dresbach, created breathtaking works of art one could only dream of wearing. Not only are they beautiful in structure and movement, but each fabric and design finds a way of telling Claire’s story and expressing her personality. So far, I’ve managed to put together three cosplays: Claire’s blue coat/Inverness attire from the first episode, “Sassenach;”a Castle Leoch get-up from Season 1; and her green rococo/“La Dame Blanche” gown from Season 2. 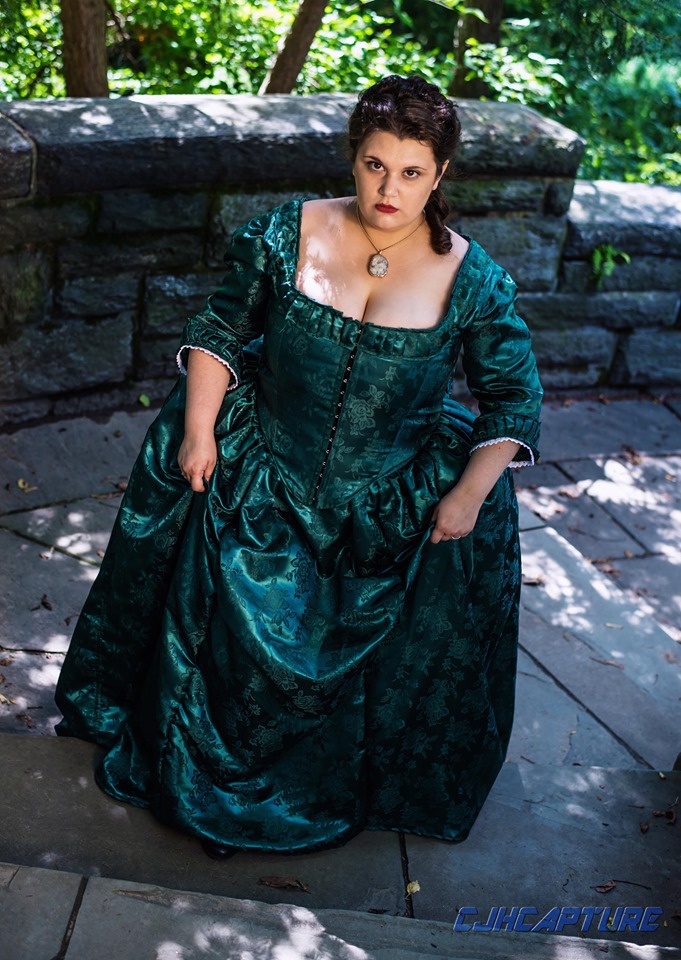 Each costume has a distinct style and requires many different levels to make it work. Even if you aren’t talented with a needle and thread (like myself), you can still achieve your own Claire cosplay. Outfits like her Inverness look have been made achievable through officially licensed collections from Hot Topic and Torrid, as well as finding accessories (like Claire’s wedding rings) on eBay and Amazon. Other costumes take a much more skilled hand to create. The amazingly talented Costumes by Aly did wonders with my commission for Claire’s green rococo gown. She also uses her skills to recreate many of the other costumes from Outlander, as well as Hamilton, Disney and more. “The thing that inspires me most about Outlander is how strong, independent and feminine Claire is,” says Aly. “I believe you can really see this in her looks. She can fit in at Versailles and get down to work on the operating table. I love seeing how she uses 18th century clothing to make business deals in one scene and adds hidden pockets for vaccinations in another. Claire uses her clothing as a tool to help her in her adventures.”

It’s not just what you wear, but how your hair and makeup are done. Both 1940s and Parisian Claire took a lot of research, along with several trial and error moments before nailing the period-appropriate curls and styles. I’m fortunate enough to be a true “brown-haired lass,” which luckily removes finding a wig off the checklist. With a few google searches and tutorial viewings, some of which are themed to Outlander specifically, it’s easy enough to find ways of achieving the look. Putting them into practice is another story. My attempt at a rococo hairstyle took about three hours of testing and every bobby pin I had in my possession. But once each piece of the puzzle starts to come together and the image of the character becomes more clear, there’s hardly a more satisfying feeling than the completion of a cosplay you’ve worked so hard to put together.

At the time I was putting together my first Claire cosplay, only a few people I knew were aware of Outlander’s existence (that number has sufficiently increased after successfully convincing many friends to watch the show). I had begun to wonder if anyone would get what character I was trying to represent. Too many conventions and Halloweens have passed me by where no one knew who I was dressed as. To my surprise, my first con dressed as Claire turned out to be my favorite to date! Not only was the cast and crew present, but there was such an abundance of Outlander community surrounding me. I saw so many amazing “Claires” walking about showcasing a variety of looks and seasons, was asked for photos and was even interviewed by PBS. It was then that I realized just how big and wonderful the fandom was. Meeting others who are just as passionate about this series was one of my inspirations in developing my series for Outlander Cast, Sassenach Spotlight. I wanted to help highlight fans’ voices and achievements so a wider audience could appreciate them. 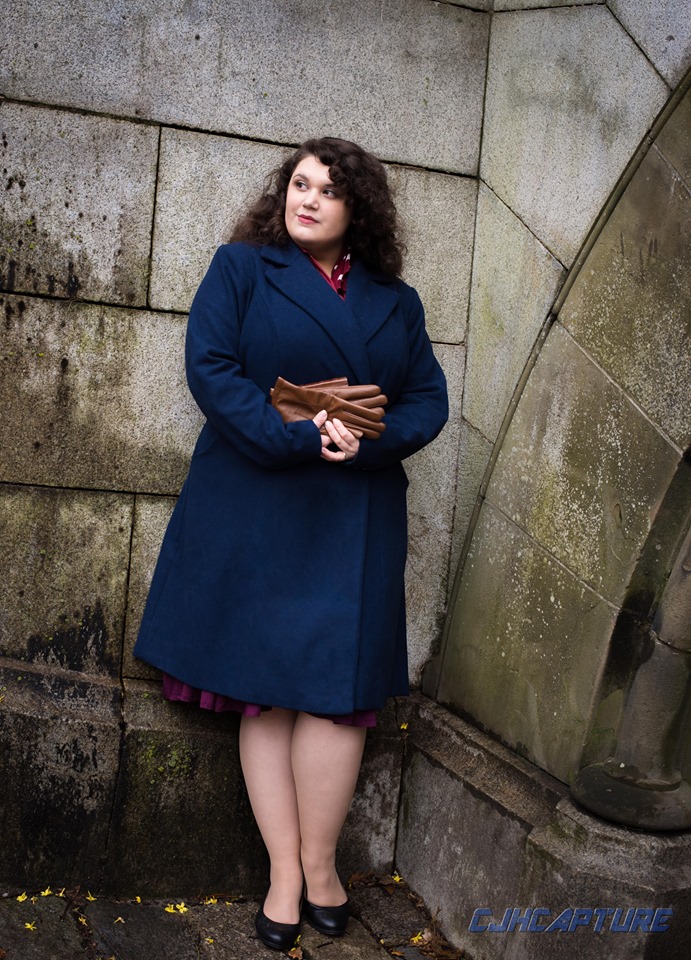 Something I’ve always striven to do is not cosplay the characters that are the most popular at the moment, but the ones whom I admire and would want to represent. With Claire, her perseverance, fortitude and intelligence are only enhanced by the wardrobe she wears. She’s been through so much and has faced much hardship, and yet she always finds a way to keep her head held high and conquer her trials with grace… while also being impeccably dressed. Caitriona Balfe does a phenomenal job bringing the character to life on screen, and her character serves as a strong and inspiring female to emulate.

Personally, I love cosplaying Claire because not only is she a character I admire, but it makes me feel good about myself. For a long time, I’ve struggled with body image issues, trying hard to learn to be happy with who I am on the outside. Cosplay brings about a new sort of confidence, taking the strength of whatever character I’m representing and letting it come through in my own. Through the costumes I wear, I feel good about myself and how I look, even if those who aren’t familiar with the show or books have no clue what I’m going for. I cosplay for myself, and to show my appreciation for a character and for a series that has brought me so much joy.

What character would you bring to life through cosplay? Or maybe you already have—we’d love for you to share your experiences below!