Roger Mackenzie has had his neck on the line since the first few minutes of Outlander Season 5. His father-in-law takes to him with a cut throat razor on the morning of his wedding, with more than a tad of hidden angst between the two. Jamie has not forgiven Roger for taking his time coming back to Brianna, and there is an uneasy detente between them. 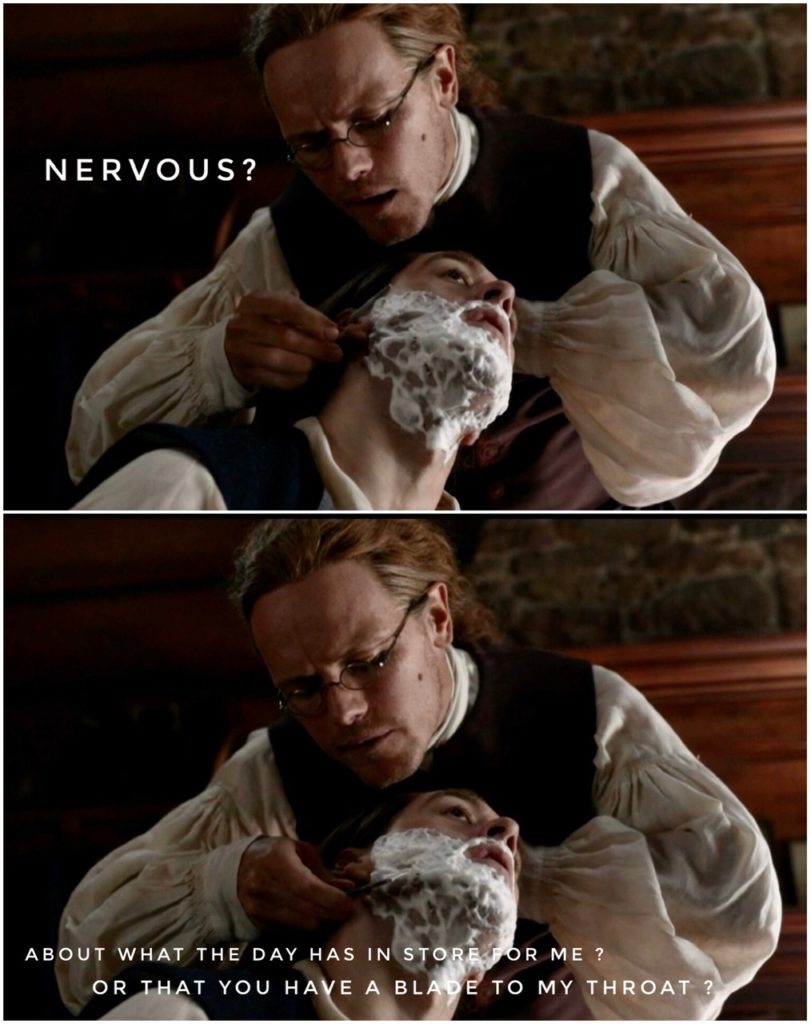 Was Roger destined back then to be ‘The Hanged Man’? 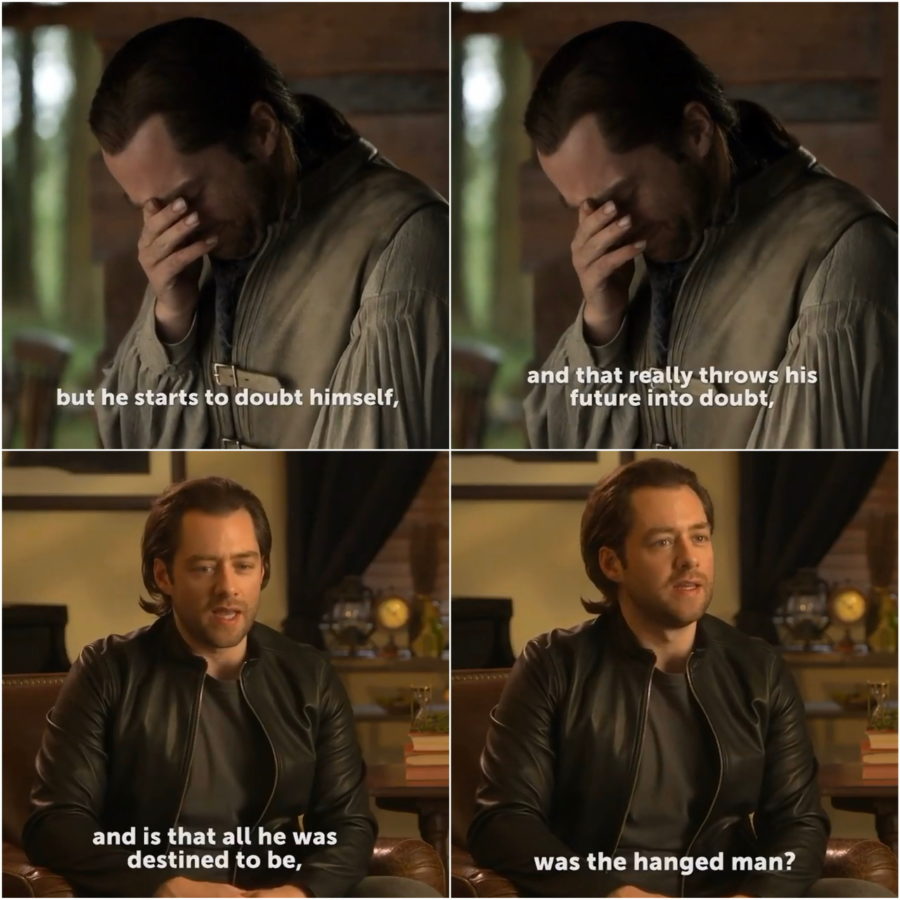 The Hanged Man (XII) is the twelfth trump or Major Arcana card in most traditional Tarot decks. It is used in game playing as well as in divination. It depicts a pittura infamante, a shameful image of a traitor being hung upside-down by one ankle. This method of hanging was a common punishment at the time for traitors in Italy. The Hanged Man is the card that suggests ultimate surrender, sacrifice, or being suspended in time. It represents letting go, breaking old patterns, circumspection and metamorphosis 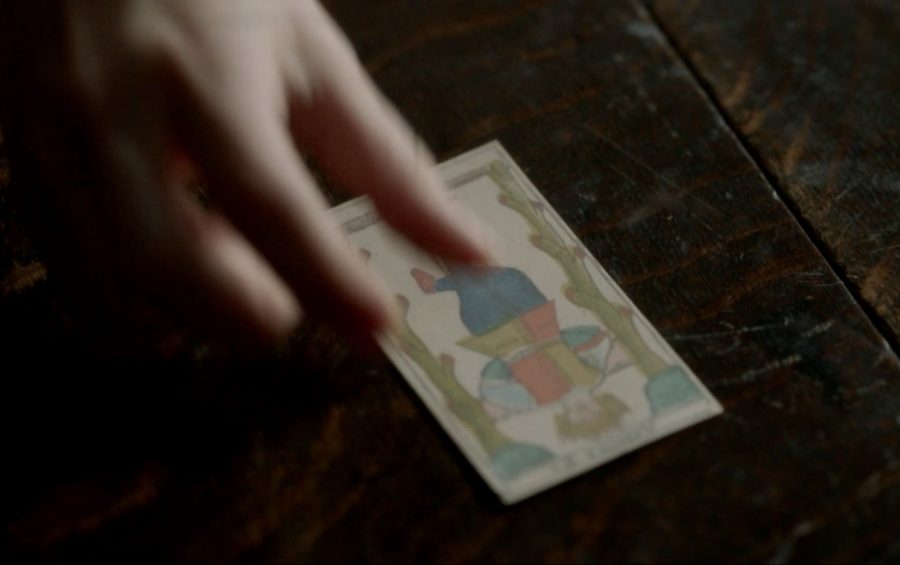 The first few episodes of Outlander Season 5 have frequent references as to Roger’s ability to fit in. Does he have the resources and the wherewithal to be an 18th century man? Can he develop the skills he will need? Jamie says that Roger sings like a bird but can’t put one on the table. We see him questioning himself at every turn. He can’t shoot. How will he provide for his family? He confides in Bree that his father-in-law does not trust him.

Roger’s strength is in his voice: he is a singer (and they sure let us know that!) and a communicator (a history professor forbye). He can calm the ugliest of the drunken Brownsville oafs with his happy tunes. And in Outlander Episode 507, “The Ballad of Roger Mac,” he uses his skills to cross into the enemy camp to negotiate with Murtagh, as leader of the Regulators. Roger volunteers for this dangerous mission perhaps in large part to prove himself to Jamie Fraser, to prove to his father-in-law that he is fit to be a captain in the militia.

Of course that all goes terribly wrong and he is “accidentally” hanged by Governor Tryon, after being mistaken for one of the Regulators. We see Roger at the beginning of Outlander Episode 508, ”Famous Last Words,” as a seriously desolate man, all his fears and insecurities now drastically compounded by the trauma of violence, abuse and a near-death experience. And remember, this is the second time he’s endured most of that since he came through the stones. 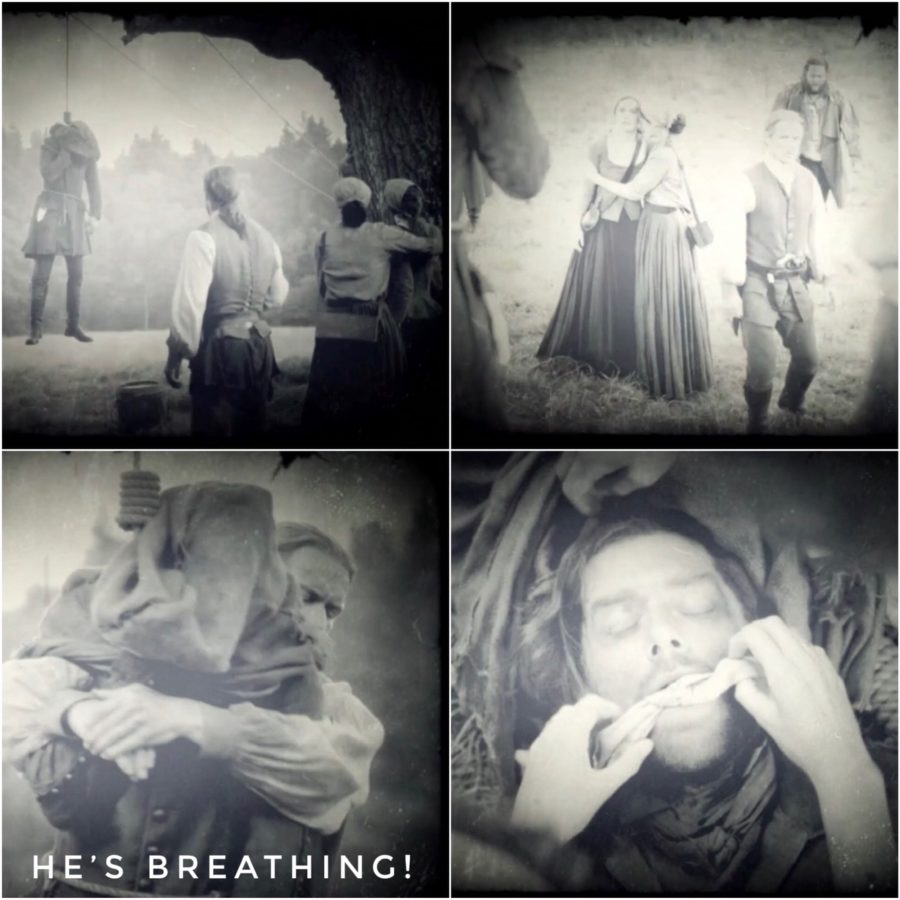 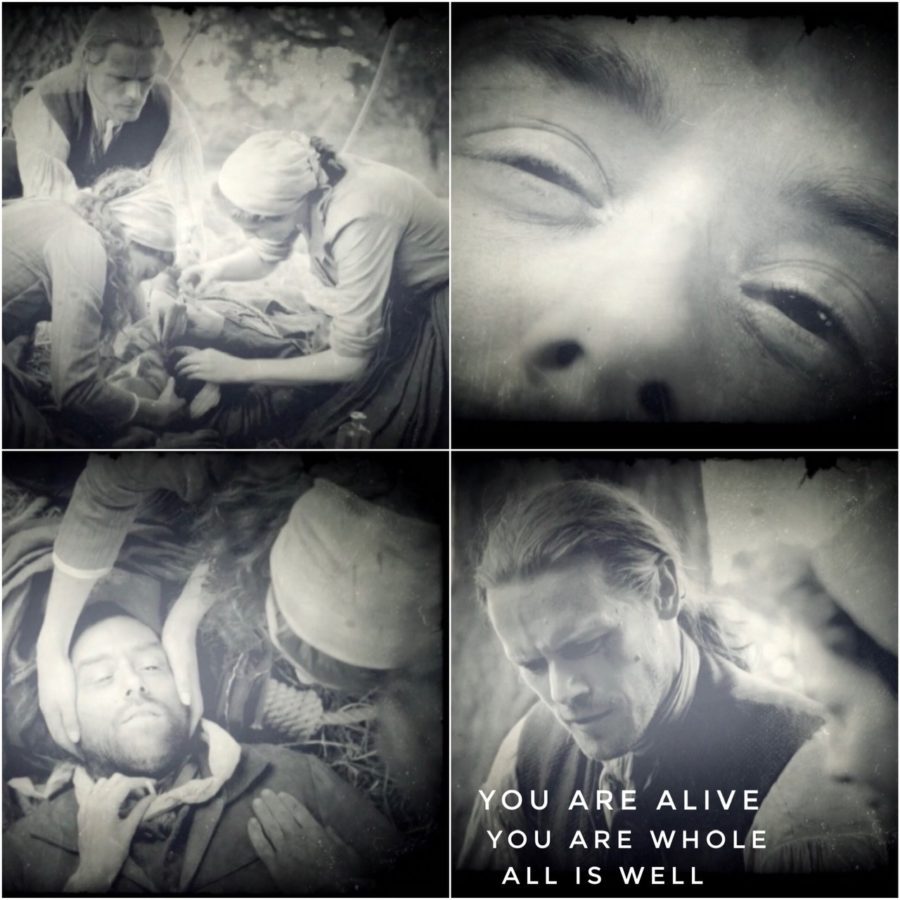 Claire uses the labels shell-shock and war neurosis, which were terms used to describe the emotional and psychological effects on soldiers returning from the first and second world wars. In todays parlance we use the term Post Traumatic Stress Disorder (PTSD) as the effects of intense or prolonged psychological trauma can be every bit as serious as physical injury. 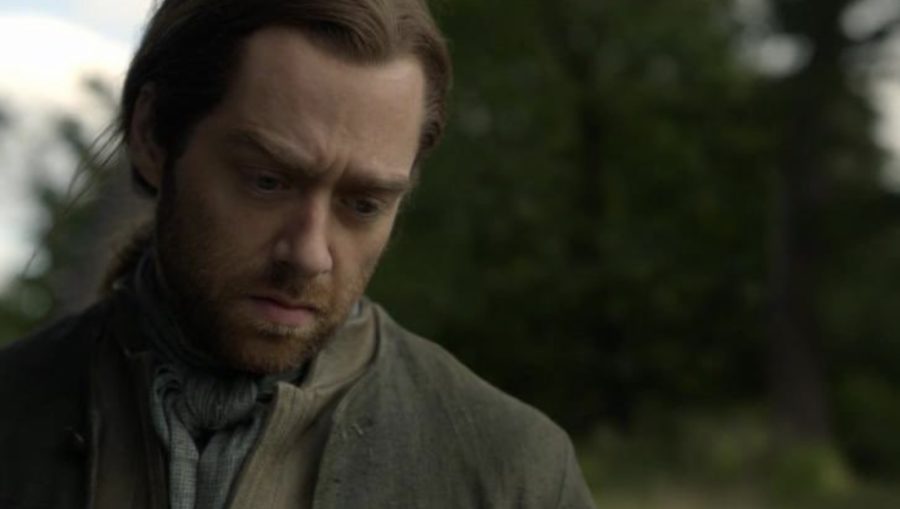 Dr. Google describes PTSD as a group of stress reactions that can develop after experiencing or witnessing a terrifying, traumatic event. People may feel anxious and highly vigilant, and have intrusive thoughts and memories of the trauma. The condition may last months or years, with triggers that can bring back memories of the trauma accompanied by intense emotional and physical reactions. Symptoms may include nightmares, flashbacks, avoidance of situations that bring back the trauma, heightened reactivity, anxiety or depressed mood. 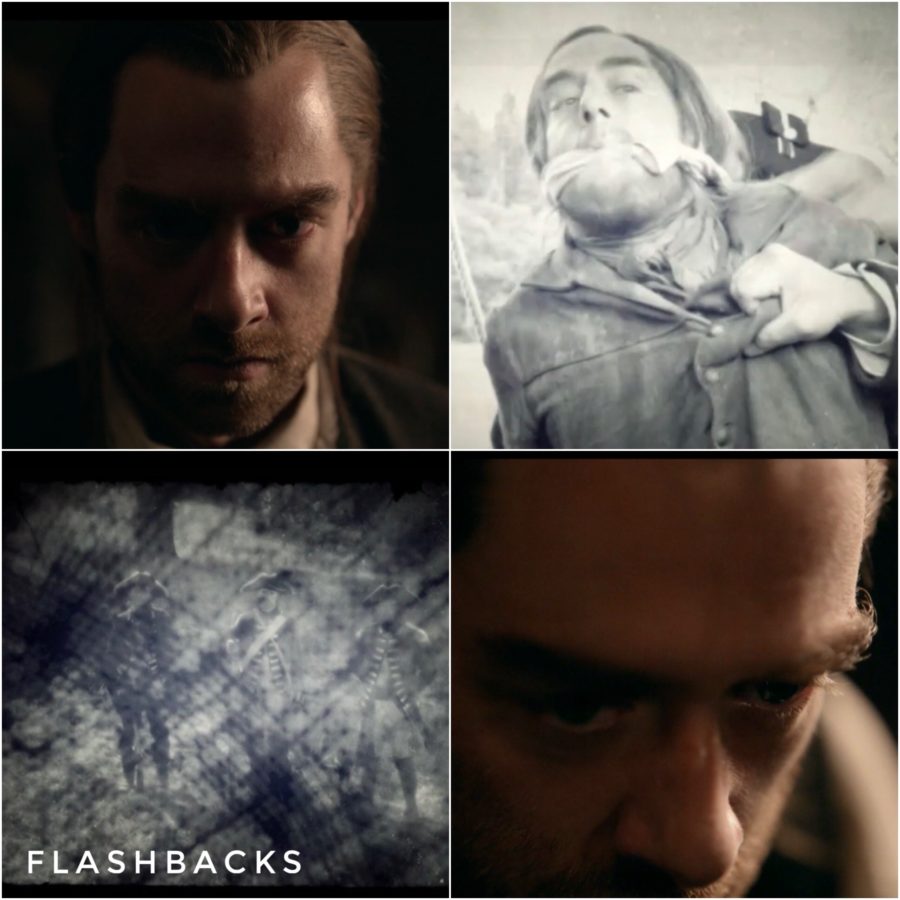 Flashbacks are like waking nightmares. They can come on suddenly and feel uncontrollable. They are more like a nightmare than a memory because sufferers often cannot distinguish between the flashback and reality, feeling like the traumatic experience is happening again, in the moment.

If you were making a movie or a TV show, how would you show these flashbacks? These moments of inner terror? How would you get into the head of the character and show that intensity to your audience? I thought that the “silent movie” device was a really powerful way to do that. Over the course of the episode we saw Roger moving from being completely overwhelmed by the flashbacks to the point that he has lost his centre, his voice. They happen with the slightest triggers at first and seem to resolve in an epiphany during his journey with Young Ian. It remains to be seen how much healing has taken place for both these young men.

One of the scenes that impressed me during the episode was when Bree finally “lost it” with Roger and pleaded, demanded and yelled at him to come back and take his place in their family. For me, this mirrored the way Claire fought to bring Jamie back from the brink in Outlander Season 1, after he was tortured by Black Jack Randall.  Sophie Skelton and Richard Rankin both powerfully acted the scene, proving how much they’ve come into their own as major players in the series. But alas, Roger was still not ready to “return.”

It turns out that Roger and young Ian were kindred spirits of sorts. Did they recognise that in their first embrace? Remember that they really did not know each other at all, and that first encounter felt like something of a redemption, each forgiving the other for the loss they inadvertently caused each other. It is a reminder, too, that both have suffered through many ordeals already. 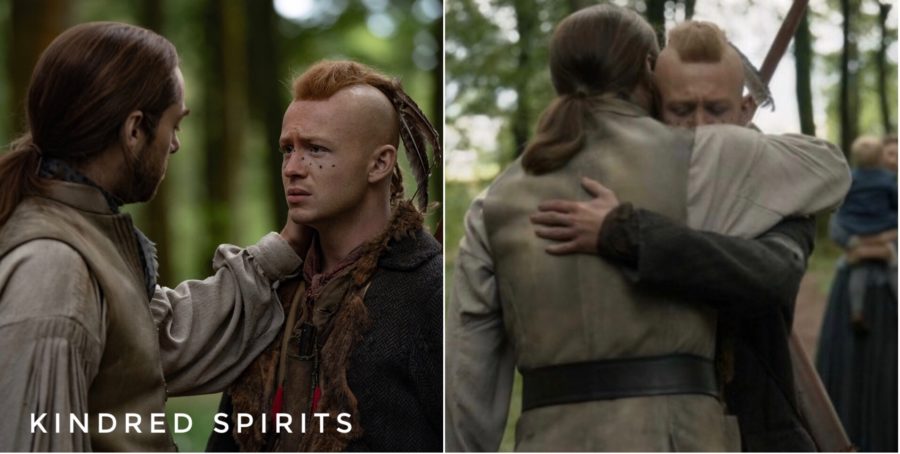 The journey they take together at Jamie’s behest (did he wisely ken that these two could help each other to heal?) accomplished more than surveying Governor Tyron’s land grant. Two tormented souls were able to see the other’s depth of misery and to somehow haul each other back from the edge. Or so it seems — it might be a little too handy to believe that both of them are “cured” especially since Ian has only hinted at the source of his desolation, so far.

Roger does return to Brianna with new hope in his eyes and he seems to have lost the “thousand yard stare.” He tells her he will not be the same, but he will be there. Back to the “hanged man” definition above, it seems he is letting go, breaking old patterns, and perhaps undergoing a metamorphosis. Time will tell. 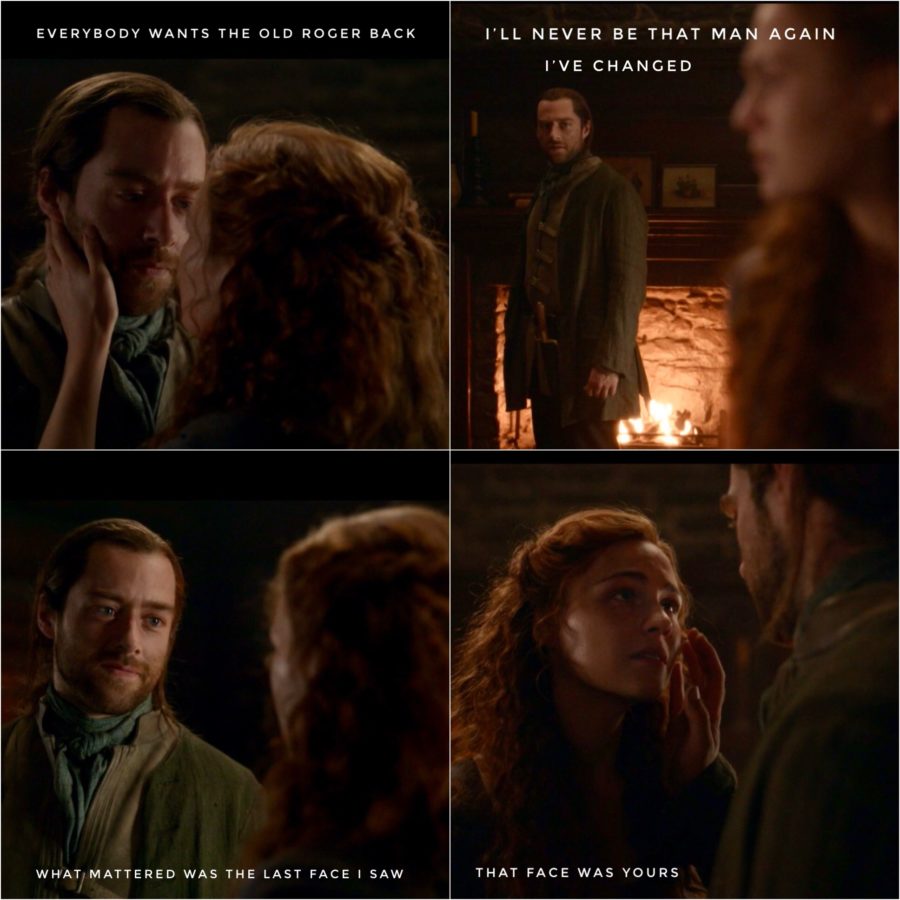 This episode explored sensitive mental health issues in a raw and realistic way. Many book reader fans were incensed that Roger or Ian would ever contemplate suicide. But, hey, aren’t we encouraged in this day and age to see mental health issues and crises not as personal weakness but as a response and a challenge to people who may need to reach out to others for support and guidance? This is what Roger and Ian do: they challenge, support and guide each other through their darkest moments. The writers, production team and actors used a powerful cinematic device and the theme of the hanged man to great effect. What a show!

And P.S. its great to see that amid all that intensity, they can have some fun times ….

From John Bell’s Twitter with the caption ‘just two boys on a camping trip, braving the new world’ 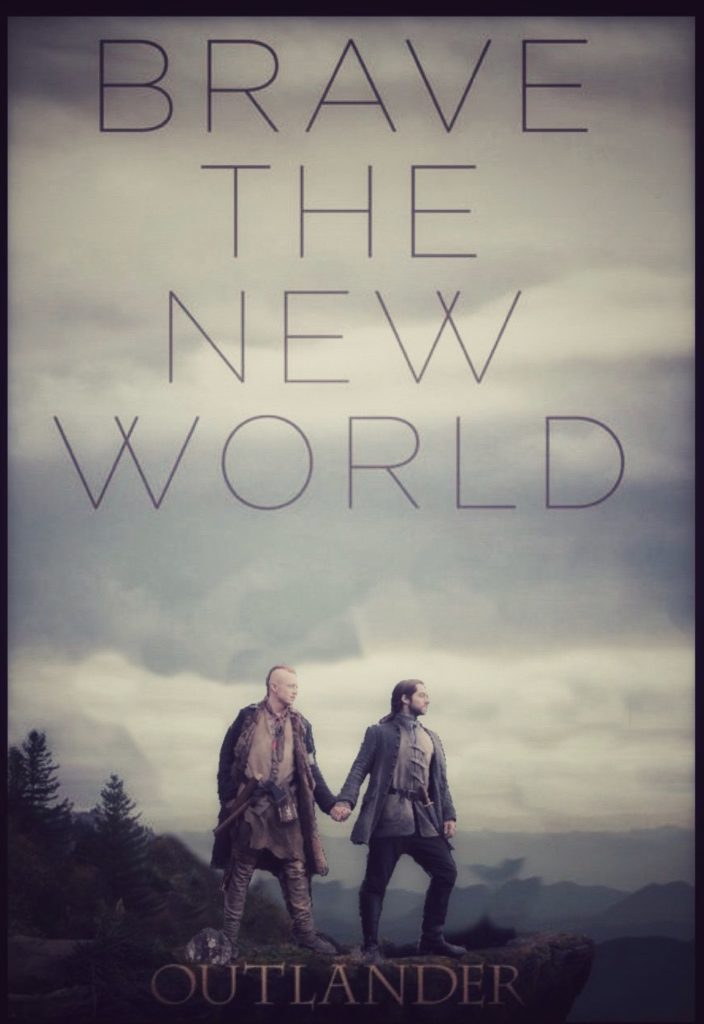 and from Richard Rankin on Instagram “team bonding weekend:” 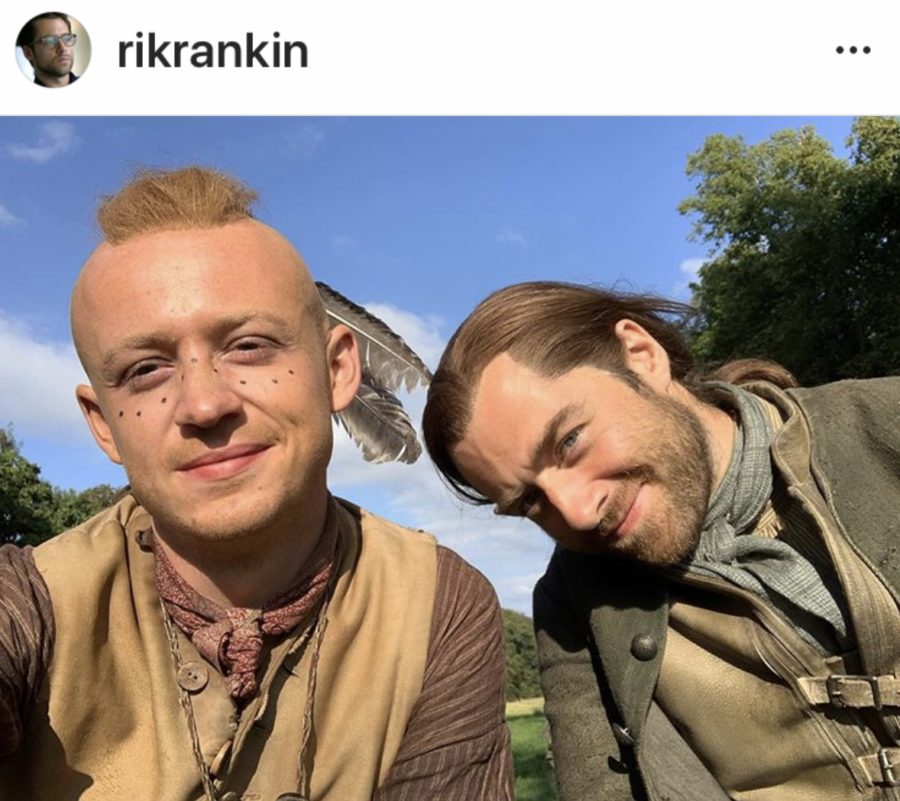 What did you think of the portrayal of Young Ian’s and Roger’s mental health struggles in this episode?