Although many fans of Outlander love to show their appreciation for their favorite books and television show in what they wear, not many of us can head to the office in t-shirts depicting our favorite lines or character, much less go about out everyday life in bum rolls and long, tartan skirts (as much as one would like to). Showing pride from one’s pop culture clan must be done, at times, in a much more subtle fashion. That is where Erica Sooter, the creative Sassenach behind Brio + Brandish, comes to the rescue. 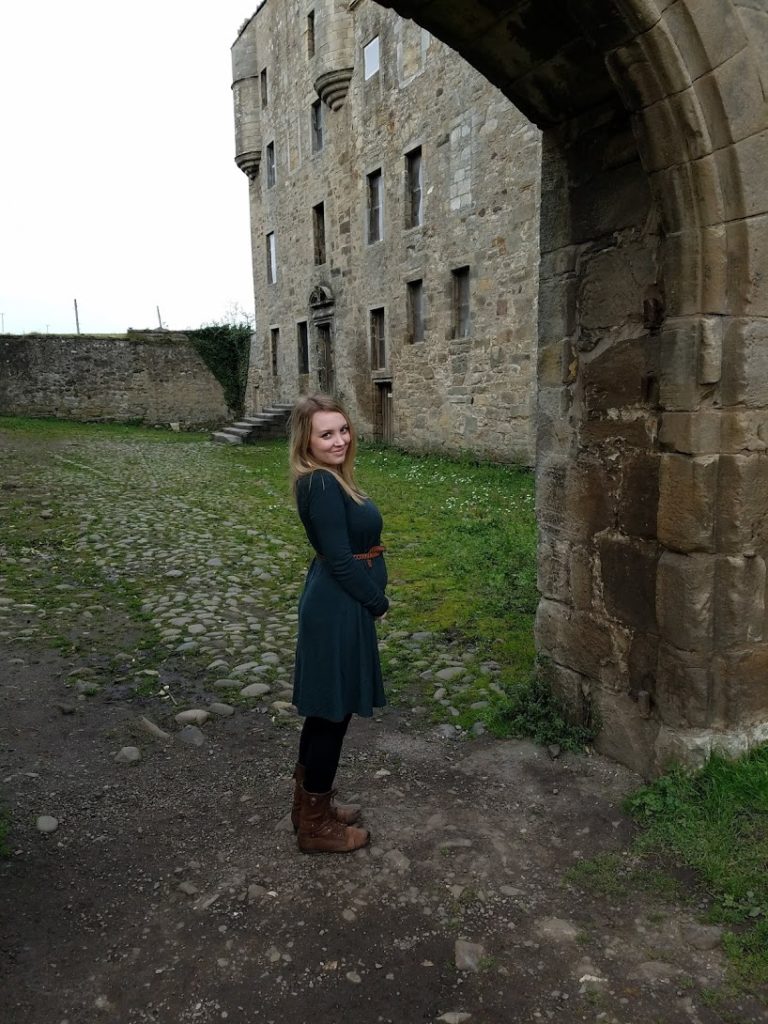 A graduate of the University of Washington, earning a Fine Arts degree in Interdisciplinary Visual Art, Erica found a love for drawing and crafting at a very young. Around 2011, after going back and forth between jobs that failed to challenge and utilize her creativity, she turned to her art and looked for ways to take her ideas to a professional level. It was then that she discovered the welcoming community of bookish artists that turned their designs and love for stories into enamel pins. Cut to two years later, where Erica has found success with her shop, Brio + Brandish, where she sells not only pins, but stickers, jewelry, bags, and other items based on her favorite series, including Harry Potter, A Court of Thorns and Roses, A Discovery of Witches, Good Omens, and, of course, Outlander

As a fan of the book and television series years before creating Brio + Brandish, Erica created an Outlander collection that includes several beautiful, wearable tributes to Diana Gabaldon’s time-traveling tales, ranging from a stunning cameo series of the story’s two main couples and pins brandishing her favorite quotes, to miniaturized versions of Claire’s iconic wardrobe. “I love trying to make pins for memorable or funny moments from the books/show that fans will recognize,” she said about how she gets her inspirations. “As I (re)read and (re)watch, I take notes of scenes and characters that stick with me and try to find a simple way to capture the idea in pin form.” Making one of her incredible pins doesn’t happen overnight. It takes quite a lot to turn her ideas into a wearable item — from sketching and finalizing a design, picking out the right colors, sending them off to the manufacturer, to getting them shipment-ready. The process can take anywhere from three weeks to two months, but the end product is a beautiful work of art any fan of Outlander would want to add to their collection. 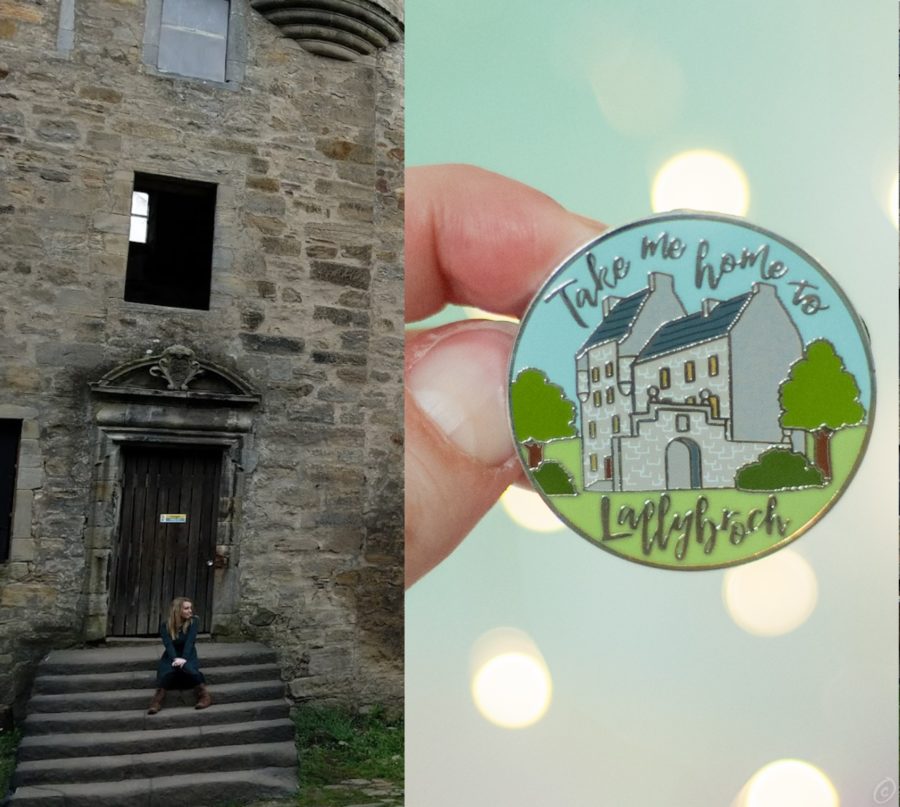 Erica Sooter at “Lallybroch,” along with her pin design inspired by the location

Tell us a little about yourself: I’m an Obsessenach from the Pacific Northwest with dreams of living in Scotland one day! I run a bookish enamel pin shop called Brio + Brandish where I make all sorts of nerdy and bookish goodies like pins, keychains, jewelry, apparel, mugs, tote bags and more. I love being able to create things for the fandoms we all love (especially Outlander!). In my spare time I love reading, spending time outside, playing Animal Crossing, and binging all my fave TV shows! I am a connoisseur of cheese, occasionally do wedding photography as a side job and my first fandom was Lord of the Rings.

Favorite Outlander character?: Hands down, Jamie… obviously! Who isn’t completely enamored with the King of Men? But if I had to choose favorite secondary characters, I would say Young Ian and Lord John — they are both so compelling and loyal and caring.

Favorite Outlander villain?: Black Jack is definitely the MOST EVIL. But I do like Stephen Bonnet, too. I feel his character was more nuanced and it was interesting to see different sides of his character — the charming pirate, the sadistic abuser, the broken and damaged man.

Favorite Book/Season?: Book 1 [Outlander]/Season 1 will always hold the top place in my heart. It’s the beginning of the magic, everything is new and exciting, the passion overflows, the life-long love begins! Other than that, I love Book 2 [Dragonfly in Amber]/Season 2 for the intrigues and drama of France and Book 5 [The Fiery Cross]/Season 5 for the strong family bonds and trials the Frasers/MacKenzies go through!

Are you a book reader and/or show watcher?: BOTH. I’ve watched the show about 5 or so times through (and just started another re-watch to cope with Droughtlander! hah) but I have also read the books and side novellas and love them dearly. I recently started listening to the audio books while I’m working, too! 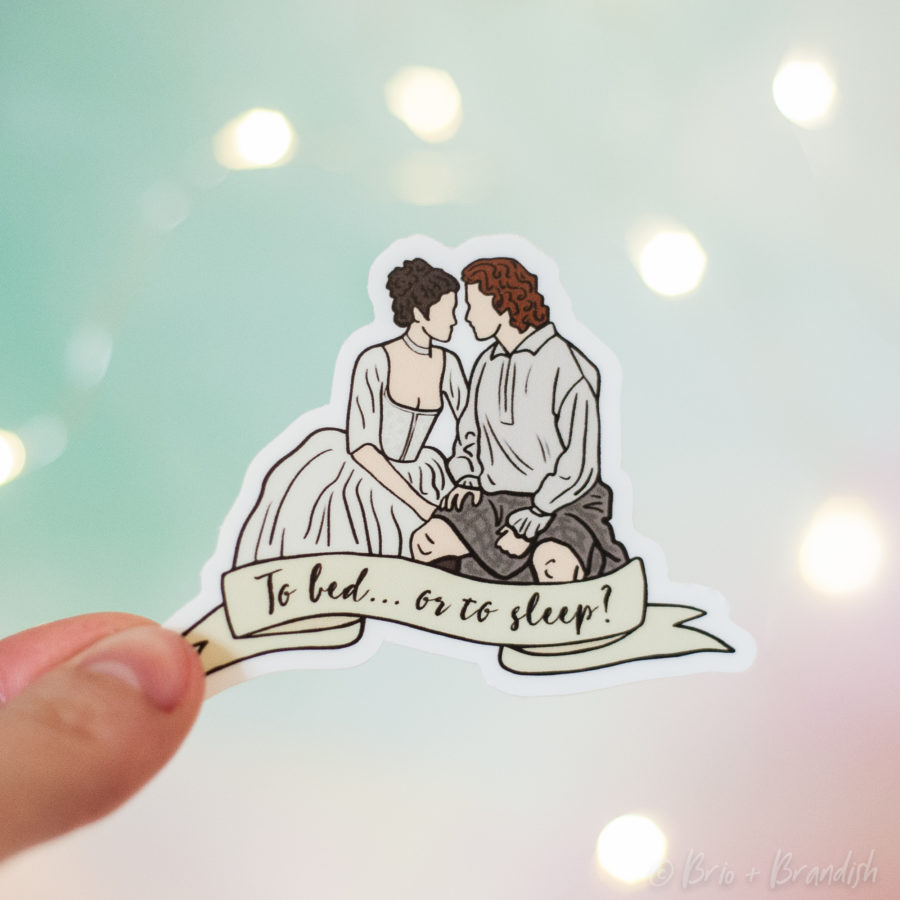 What was your first experience with Outlander?: My mother-in-law introduced me to the show first. She won me over by saying it was 18th century Scotland, romance and time travel (my ancestry is largely Scottish and I love timey-wimey stuff like Doctor Who!). She is also the one who lent me all the books and the rest is history.

In what way has Outlander inspired you, personally and/or creatively?: Outlander is my biggest fandom! It has entirely consumed me (LOL!) and I am HERE for it. When I started my enamel pin business, I just knew I had to create pins for Outlander. I hadn’t seen many people doing them and I NEEDED merchandise for this fandom, so I decided to make it myself! I love capturing little moments from the books in pin format — from the hilarious moments like “Your honeypot is bare,” the turtle soup scene or “To bed or to sleep?” to poignant ones like Lallybroch, Fraser’s Ridge and the dragonfly in amber. I think my favorites, though, are the cameo brooches of Jamie and Claire.

How do you share your love for Outlander?: By making alllll the pins and stickers to share with the world! I also love chatting with fellow Obsessenachs, breaking down the latest episode, talking about favorite book moments or sending Outlander memes and gifs back and forth. I could talk about Outlander all day with anyone who is willing to listen! It’s also my mission to get as many people hooked on the books/show as possible, so I’m constantly suggesting it when people ask me for recommendations!

Any special/fun Outlander moments you want to share?: I’ve had a few people send me photos of them wearing my pins at actor meet-and-greets at cons, so I’ve seen my Jamie pin next to Sam Heughan and it just made my heart go pitter patter! But my favorite memory of all was actually traveling to Scotland a couple years back to experience the beauty of my ancestral country and visit a couple of Outlander sites like Midhope Castle, aka Lallybroch! I was 16 weeks pregnant at the time and feeling awful, but it was my goal to see Lallybroch and it was so worth it. We were the only ones there and it was so peaceful to just walk the grounds and see it with my own eyes!

What are you looking forward to in upcoming books/seasons/events?: I neeeeeed Diana to finish Go Tell the Bees that I am Gone! We’ve been waiting FOREVER, Diana — give it to ussssssss! I need to know what happens next! As far as the show goes, I love seeing which parts of the book they choose to portray and how they choose to do so. It has been so cool to see some of my favorite scenes brought to life and also so fascinating to see how they have taken it and made it their own as well. 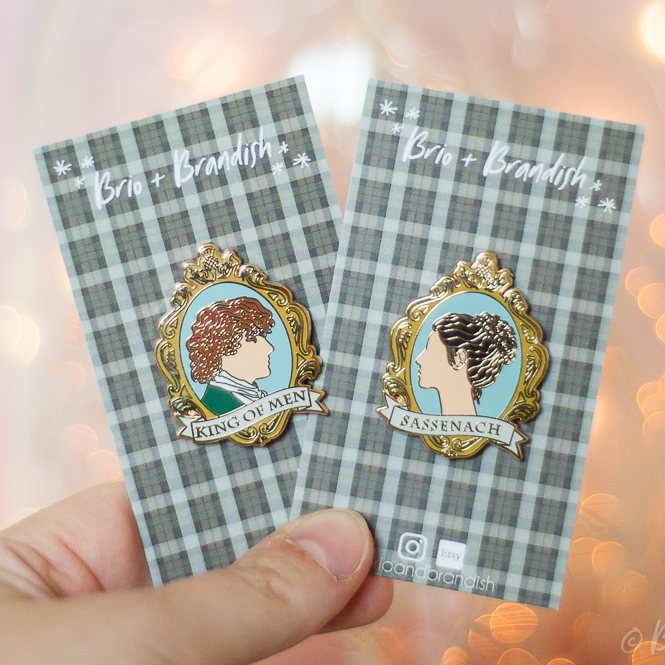 Check out Brio + Brandish at her website and maybe order some of her Outlander pins for yourself! You can also find her on Facebook and Instagram for updates on upcoming collections.