After a long pause, Outlander fans traveled from near and far to celebrate a new season at the 2021 New York Comic Con.

The current droughtlander in which Outlander fans find themselves has been a truly difficult one. Season five premiered in February of 2020, kicked off by several promotional events and premieres. Little did fans know that those events would be the last time Sassenachs could gather together to share their love for their favorite show for a long while. The rise of the COVID-19 pandemic left fans to watch the rest of the season from the safety of their homes, unable to host watch parties or toast the season finale in-person with friends. And as the droughtlander began, so did the question of when the next season would be able to start filming, or when watchers would be able to gather once more.

While the COVID-19 crisis has not vanished, large indoor gatherings have begun to start-up once more thanks to development of vaccines and implementation of strict health and safety protocols. New York Comic Con was one such event, announcing their return to the Javits Center in early October. This sent many Outlander fans, including myself, to the edge of their seats.

For the past two years (with the exception of the convention’s virtual event in 2020), there had been some sort of presence of Outlander and STARZ through panels, signings, and booth activations. Would the cast and crew be returning to the event? Sure enough, the very first panel announced for the event, just before badges went on sale, was Outlander. 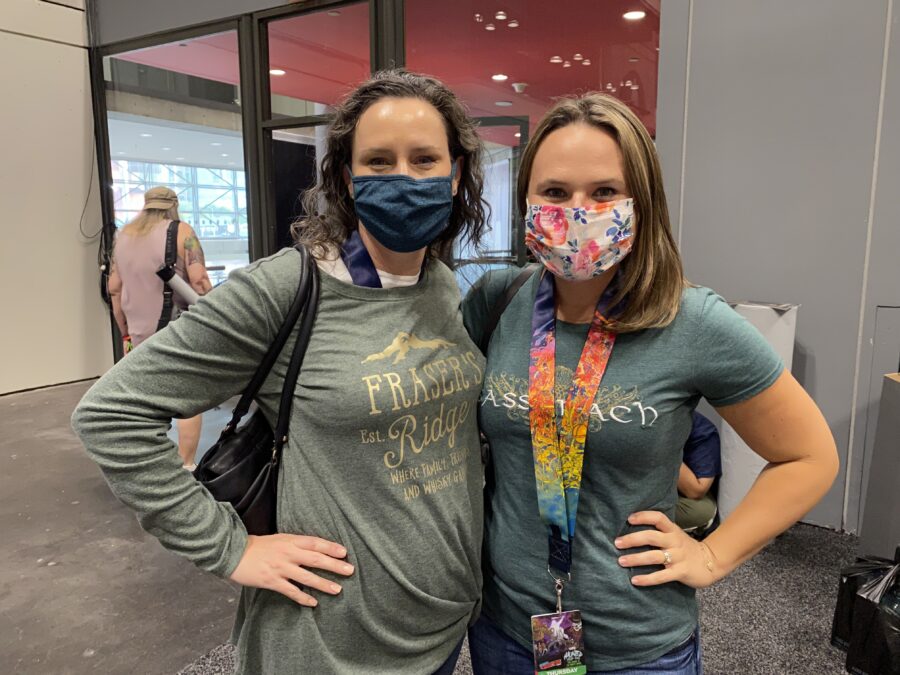 The major Outlander events, including a panel, private autograph signing, and fan meet-up, were scheduled for Saturday at New York Comic Con; however, the excitement and anticipation was present even at the very beginning of the convention on Thursday.

Texan Sassenachs, Nicole Dubiton, and Leah Inkrott, had already made it onto the exhibitor show floor, walking around, happily sporting their best Outlander t-shirts. When asked what they were most looking forward to at New York Comic Con, Dubiton stated, “seeing Diana Gabaldon and Sam Heughan in person is pretty exciting.” Along with the early arrival of fans, a few vendors in “Artist Alley” and on the show floor were selling stunning works of art themed around the show, as well as other themed merchandise like shirts and jewelry.

When Saturday finally arrived, the energy around the Javits center was filled with excitement. Even the staff knew something special was about to happen. “Let me guess, you’re an Outlander fan?” smiled a staff member as I passed him by in my costume partly-inspired by Claire’s wedding gown. I proudly confirmed his suspicions before making my way to the brand-new event hall to join the other Sassenachs queuing up for the 11 am panel. 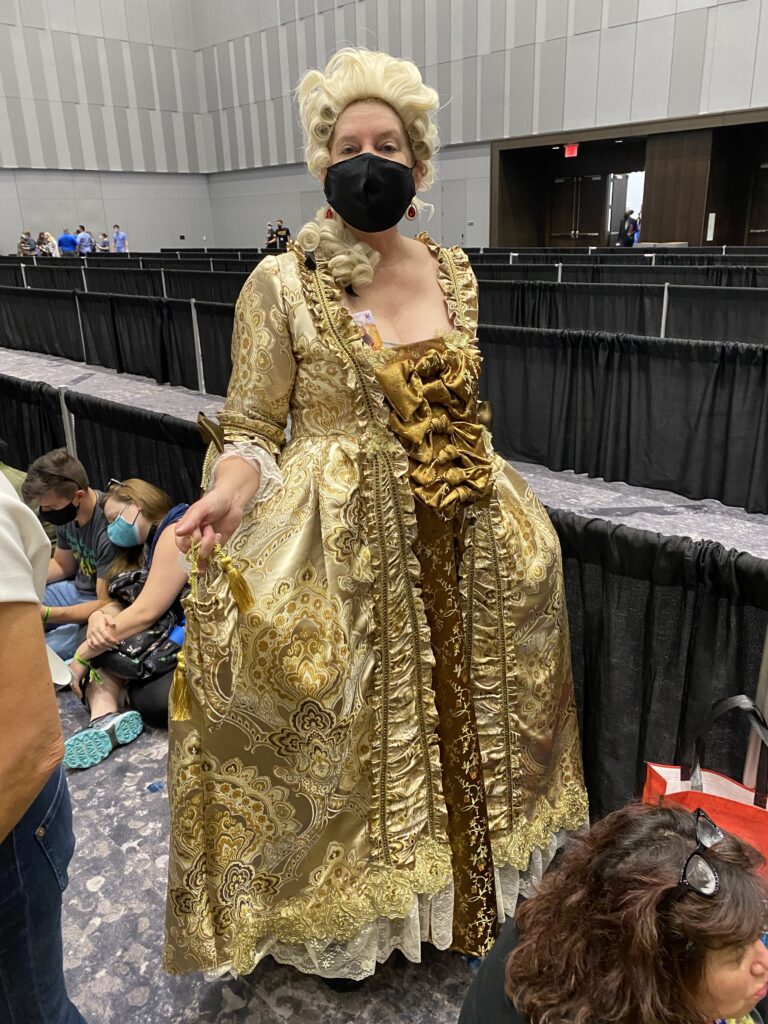 Anne Swetonic in her Jocasta cosplay

At 9am, there was already a large amount of fans gathered at the Empire Stage, and even those who had been waiting for hours already hardly seemed starved for sleep. Everyone around was fueled with anticipation and joy for simply being surrounded by others who were just as passionate about kilted men and time-traveling standing stones. There were veterans to the convention in line, as well as newcomers. “We literally flew into town just for Outlander,” said friends Jenny Garrison and Lindsay Beasley, who traveled all the way from Indiana to attend their first New York Comic Con. Rounds of applause sounded for those arriving in their hand-crafted costumes, like Anne Swetonic’s stunning Jocasta cosplay, and friends rushed to embrace one another after so much time separated in isolation.

After the doors to the Empire Stage finally opened, and fans settled in their seats, sitting amongst new and old friends alike, the moment everyone had been waiting for finally arrived. Author Diana Galbaldon, show-runner Maril Davis, and Jamie Fraser himself, Sam Heughan, were there in-person, while cast members Caitriona Balfe, Cesar Domboy, Lauren Lyle, and John Bell appeared virtually. I was personally impressed with how New York Comic Con approached their virtual appearance; having expected a pre-recorded, edited video from the distanced cast. Instead, each person was given their own screen on stage, and was broadcasting live, loud, and clear. 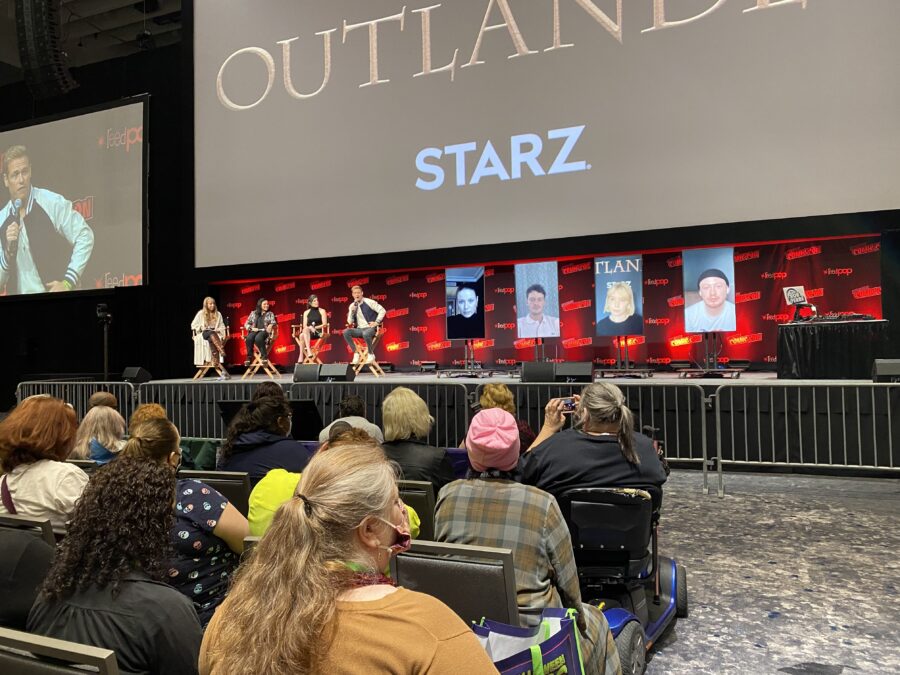 The Cast and Crew of OUTLANDER at NYCC, both in-person and virtually

Before the questioning began, fans were treated to both a take-home poster and the premiere of the first trailer for Outlander season six. In the trailer, the beginnings of the American revolution loom over the residence of Fraser’s Ridge, set to a beautiful rendition of “The Water is Wide.”  During the panel, the cast and crew also spoke on, not only the difficulties of filming with COVID precautions, but also the harsh weather conditions. And while not much could be said for what is to come in the next eight episodes, everyone was able to share their enthusiasm for the future, as well as a warning for the intensity of season six. “There is a lot of stuff you will be excited about,” said Gabaldon when asked what she was most looking forward to fans seeing in the upcoming season. She then went on to confirm that it is one of her favorite seasons yet, right after season one.

Once the panel dispersed, the present cast and crew, along with a lucky few fans, made their way to a private autograph session, while the rest of the fans gathered to congregate with one another and reel over everything revealed in the panel. “I am excited to see the Christies,” said cosplayer Marlow Everly, who had crafted her very own season one Claire costume for the event. “I’m kind of curious if they’re going to veer back more towards the books, in terms of the storyline, because they went a little bit rogue in season five.” Fans also converged later in the evening for a small meet-up, where attendees were able to rest after a long day of walking through the Javits and talk with new friends. 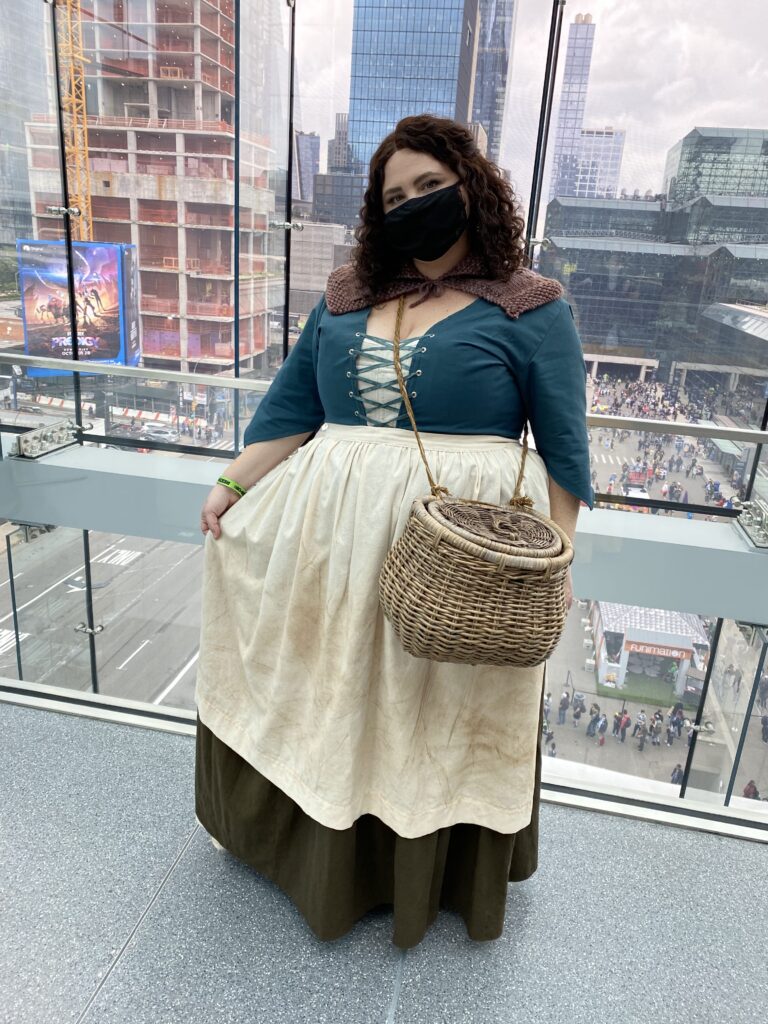 This was my sixth year attending New York Comic Con, the third as an “Ob-sassenach.” Going through 2020 without this event, without seeing friends, without having a place to meet and share passions with like-minded people was hard. But the moment I entered the Javits and saw familiar faces, as well as new ones, there was an overwhelming sense of joy abounding from everyone around me.

From the vendors who were happy to see people appreciating their work, veteran con-goers awaiting a highly-anticipated panel, to the newcomers taking in their first, exciting convention experience, it was clear that we were all simply happy to be there, in-person and away from hiding behind our screens.

As fans of Outlander look forward to a new season and the possibility of more safe gatherings like New York Comic Con, it is assured that Sassenachs from all walks of life will show up to support the actors, writers, and stories they love so much, come what may.