Ah, the Emmys.  As a TV fanatic, there’s no greater high than seeing your favorite show’s name among the elite list of programs recognized each year by the Academy of Television Arts & Sciences voters.

Those gold statuettes have long served as industry benchmarks indicating that the countless time spent by talented writers, producers, cast and crew to craft hours of television programming for viewer enjoyment did indeed get noticed.  For the more than 350 scripted shows currently airing on television and streaming and the fans who wave the flag for them, the Emmys are everything…but are they?

The Emmys make you feel somehow validated that your emotional investment, energy and – let’s be beyond truthful – insatiable obsession have been well placed.  I know I’ve used that rationale to my husband a time or two to justify the TV watching habits in our household.  I digress.

…until your favorite show is snubbed.  And then they mean nothing. Nada. Jack squat. 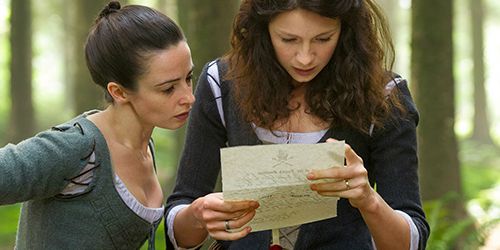 Each year, a nomination travesty reminds us how utterly ridiculous award show politics can be.  The only proof I ever needed is that neither “The Wire” nor “Parenthood” boast major Emmys (or even nominations!) to their name and “Two and Half Men” has several.   I rest my case.
Or I would have, if not for this year’s Emmy snub, our beloved “Outlander”, who received only one nomination for the brilliantly talented Bear McCreary and the Outlander theme song.  The much-talked about performances by the lead actors and the show itself were regretfully left off the list of nominations.  To which I say, it’s for the best that Emmy voters remain largely anonymous because – and I think I can speak for legions of distraught fans – I’m all for Jenny Fraser Murray or, dare I say, Black Jack Randall exacting out our dreamt-up revenge to make us feel even a tad better.

But as my parents always taught me, comparison is the theft of joy.  My outrage at Outlander’s exclusion is eclipsing the escape-from-reality happiness the show (and books!) bring me.  I don’t know about you, but I’m ready to be done with my Emmy expectation hangover. And while the hair of the dog is one theory for curing a nasty hangover, let’s go for plan B.  After all, hangovers are really just intense cases of dehydration and, as every Outlander fanatic can attest… Droughtlander is real, Sassenach. Verra real indeed.

It’s time to remedy your Emmy expectation hangover by re-hydrating with 5 reasons why Outlander’s first season was undeniably incredible – gold statue be damned:

I’ll be peppering more onto the hangover remedy list as we near closer to the Sept. 20th telecast of the Emmys, and want to include your feedback!
What made Outlander so deserving of an Emmy? Please share the reasons that Outlander’s first season wins ALL the awards in your book.