What’s It All About, Outlander?

Email
“Don’t be afraid, “ he whispered into my hair. “There’s the two of us now.”  I felt warm, soothed, and safe for the first time in many days.  It was only as I drifted into sleep under the first rays of daylight that I remembered the knife above my head, and wondered again, what threat would make a man sleep armed and watchful in his bridal chamber? – Outlander, Chapter 15 (Revelations of the Bridal Chamber), Diana Gabaldon
Many people have tried and failed to define exactly what Outlander is with even a modicum of accuracy….

If you’re trying to get the man in your life to watch it, you might tell him it’s an historical adventure about the Jacobite Uprising with lots of sex.
If you’re selling it to your girlfriends, you might tell them it’s a romance.  You’ll describe Claire’s fiery brand of old-school feminism and then wax poetic about Jamie for a bit before adding, “ . . . and there’s lots of sex.”
If you’re trying to convert a Game of Thrones fan, you’d probably tell them it’s a sci-fi time travel epic set in Scotland with plenty of gore.  Oh, and there’s lots of sex.
While each of these descriptors might be true to some extent, none of them could carry readers and, hopefully, viewers, through book after book, season after season.
So, which is it?
It’s an historical epic.  It’s also a romance and has sci-fi elements involving time travel.
So, what’s it all about?
Aha!
Here we’ve hit upon the real question.  What is this unwieldy hobgoblin of a story actually saying?
Let’s step back for a moment and take what we learn about Claire and her history and put it into some chronological perspective. 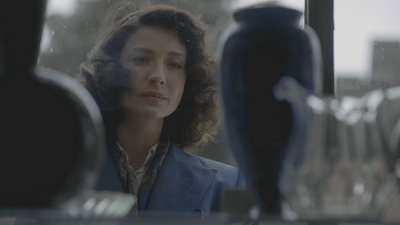 We first encounter Claire at, possibly, her most rootless.  She is a woman accustomed to chaos.  Her nomadic upbringing with her Uncle Lamb taught her adaptability and change, but it’s clear there was a strong bond there.  The world around them might be constantly changing, but there were always the two of them, together.
She meets and marries Frank before the war.  Because the show veers away from the book’s account, here, let’s stick with the show.  While it marks a major deviation, it also drives home a more obvious point.
When Frank proposes to Claire outside the Registrar’s Office, it’s a sweet, romantic, and entirely obtuse move on his part.  It’s apparent, here, that Claire, though a strong force in her own right, is already being overshadowed and repressed by Frank.  We see this clearly in the questions she asks and the manner in which she asks them. 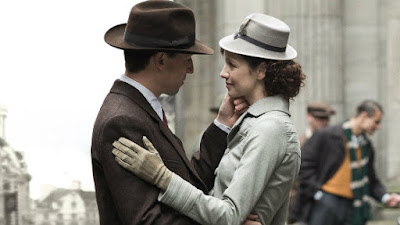 “What about your parents?  They’ll be waiting for us at the restaurant!”
“They’ve never even met me!”
“Are you sure you wouldn’t rather a big church wedding?”
“Your family would prefer it?”
Claire knows the answers to these questions already.  If she didn’t prior to the proposal, she surely does now.  If he had any desire for that familial connection, he wouldn’t be suggesting a quickie marriage by a Justice of the Peace.  Claire is much more insightful of other people’s motives than she is of her own, so we can trust her to realize Frank’s.
She asks these questions in a way many women do when they are afraid to voice their own opinions; she projects her concerns onto others.  Keeping that in mind, we can re-interpret her questions as statements of objection.
“We are being rude to your parents, who’ve never even met me. I need to know I’ve been accepted first!”
“I’ve always dreamed of a wedding in a church surrounded by family. I would prefer it!”
Frank either doesn’t understand this or doesn’t care, because he brushes this off by stating that she is the only family that matters, she and their future children. If that’s not enough, he “reassures” her by saying they’ll never have to meet “Claire Beauchamp”, they’ll have the pleasure of meeting “Mrs. Frank Randall”, and there you have it. Her whole identity gone in a moment.  It’s the earliest stages of sequestering.
Frank takes his familial ties for granted and can’t comprehend Claire’s ardent desire for an extended family, having grown up with her nose pressed against the glass like a Dickensian street urchin on Christmas Eve.
We’re never given a picture of their early married life, except to say that their time together before the war is brief.
Through Claire’s observations, we see that she may have felt at home at the front.  Certainly, she seems most vital when she’s up to her elbows in viscera as opposed to, say, pressing flowers between the pages of her botany book. 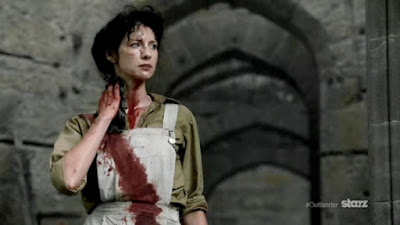 After the war, reunited with Frank, their differences have reached exponential proportions.  It’s important to note, here, that they have not become different people, rather, they have each grown more fully into themselves, and these people are diametrically opposed to each other.  Claire is a woman of action, Frank, a man of study.  She is passionate, while he is resolutely dispassionate.
By the time we reach the central opening image of the vase in the shop window, the through-line of the piece is clear; Outlander is the story of homecoming.  Claire was an outlander in her marriage to Frank, an outlander from his family, who should have been her own, and an outlander from her own time.  Interestingly, her own time is the 18th century, not the 20th.  She feels adrift until she finds a semblance of stability at Leoch and finally finds a home in Jamie.
The fact that they spend most of their time on the run makes no matter.  The story is about the homes we find in each other.  As Jamie so succinctly puts it, “There’s the two of us now.”  In a way, Jamie is an idealized version of her uncle and, if it’s true that we marry our fathers, surely Claire has married Uncle Lamb.
When the dust is settled and the choice has been made, Jamie does what Frank never did, he brings her home and surrounds her with family.  While the respite is brief and the family is left behind far too soon, this is the heart of Outlander. ‘The Wedding’, ‘The Devil’s Mark’, ‘Lallybroch’, and yes, even ‘The Watch’, these episodes tell the most important story.  Without this, without knowing and appreciating Claire’s homecoming, nothing else in this story matters.
So what is Outlander NOT about?
It’s not about Jack Randall, or time travel, or the Jacobite Uprising or even falling in love.
It’s about a woman coming home and finding her match and, by the time she finally gets her vase, she has a home to put it in. 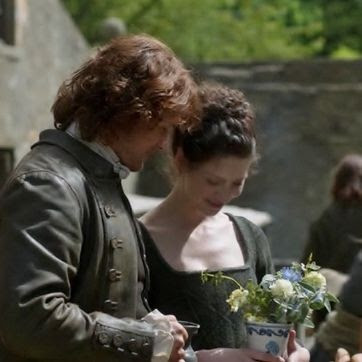 This is why Outlander has always resonated with me.  Like Claire, I have a strong desire for family and deep roots.  I grew up rarely seeing my aunts and uncles, cousins and grandparents.  Today, home is my family. It is my husband’s arms and the cherubic face of our little boy. Equally important, home is my husband’s family gatherings. Christmas and Easter celebrations which have outgrown a single home and are now held at our church fellowship hall. It is Christmas mornings at my in-laws, wearing matching Santa hats, marching downstairs ringing jingle bells before making a dash for the tree. It is everything I longed for as a little girl, gifted tenfold to my son.  If I lost everything else, I would still have a home here.
So how do you describe Outlander to your friends? What does it mean to you? Where is your “home”?