It’s All In The Details

Details, details, details. They say a lot about a show and the dedication of the cast and crew. Especially going from page to screen, keeping those details in the story are crucial. Even the little things that might not seem important, can either make or break the adaptation. Considering Outlander, which is famous for its incredible on point detail, is a challenge. Granted, some things where either altered or kept out all together. Those books are HUGE people, so despite some complaining, not everything could be kept. But as we have seen, the creators and even the actors have risen to the challenge of keeping the things that have meaning to us.

It’s the little things that count. To the design of a set, right down to the glint in the eye.

Costumes are great in that aspect. Since Outlander is set in two different periods, there will be a great difference in the look and the material and style. Terry and her team did a stand out job with every single costume worn. Every single costume was payed attention to. One particular costume in that respect is worn by one Hugh Monro. Terry has great love for this costume and is slowly becoming one of my favorites 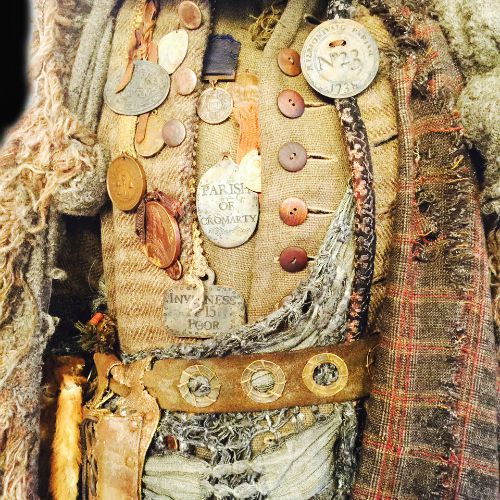 “Munro, if this was indeed Jamie’s friend, was clad in what appeared to be multiple layers of rags, the faded colors of berry-dyed fabric peeking out through rents in a shapeless garment that might once have been a women’s smock” Outlander pg. 236
“A gaberlunzie is a licence to beg, Sassenach” Jamie explained “It’s good within the borders of the parish, and only on the one day a week when begging’s allowed. Each parish has its own, so the beggars from one parish canna take over much advantage pf the charity of the next” Outlander pg. 238
The textures and the attention to detail are out this world. With Hugh being a beggar, he wouldn’t have these bright colors and fancy clothing. The clothing would be faded, worn, torn a little here and there. To look as though he’s had these pieces for a long time.
Now, when mentioning costumes, we can’t leave out the one and only wedding dress. That goes for both of the wedding dresses. Both are beautiful in their own right. With the 1940’s one , it is a little simpler than Claire’s other wedding dress. 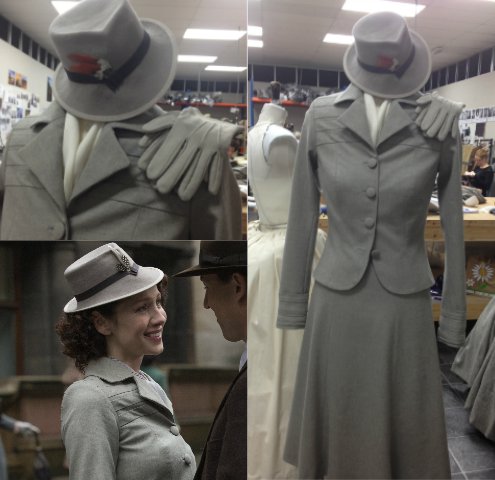 Photo credit top left and right x
Photo credit bottom left x
It’s more simple, modern, clean cut, very fashionable and tailored for Claire’s figure. It’s good reminder that Claire is a modern, independent women. On her site, Terry says
“Ron wanted the clothes to be very faded as in an old photo, so we used tones of grey and brown……….We wanted her suit to carry through some of the deco lines of the ’30s but showing the direction of women’s fashions to come during the war years. It is a very tailored, masculine style, nothing frilly or frivolous” x
Now, for THE wedding dress, it obviously had to be of a different style and fabric all together. Now the book description is somewhat different from what we see
“….it proved to be a low-necked gown of heavy cream-colored satin, with a separate bodice that buttoned with dozens of tiny cloth-covered buttons, each embroidered with a gold fleur-de-lis. The neckline and the belled sleeves were heavily ruched with lace, as was the embroidered overskirt of the chocolate-brown velvet…” Outlander pg. 158
Obviously, in the final product, there’s no chocolate brown, or gold fleur-de-lis’s, but it’s just one of those changes that works. 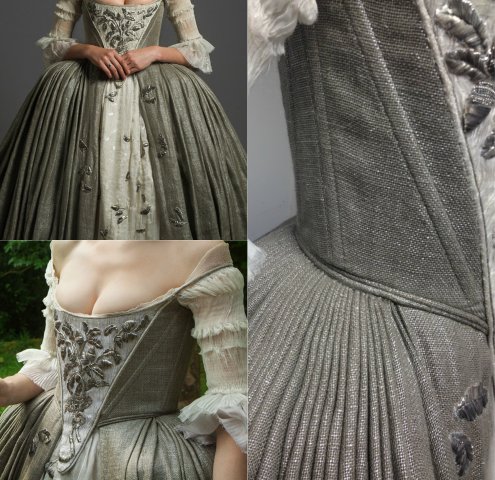 photo credit top left and bottom left x
photo credit right x
The second wedding dress was 66lbs!!! It had a length of 180 cm. It took 2 people and 30 minutes to get it on. x
Some of the materials that made this work of art are mainly silver wool, three chunks of mica that was shaved down to be paper thin. The acorns and leaves where done in an embroidery frame and where painted to look oxidized. x
That’s a lot of fabric.
Costume department deserves a standin ovation.
I love how they put effort into every single costume garment. They didn’t just focus on the main characters, and just throw together all the extra’s costumes. They took care of all of them.
Since there are thousands of costumes for Outlander that deserve just as much praise, I made a little collage of them. All the pics can be found on Terry’s site http://www.terrydresbach.com/ 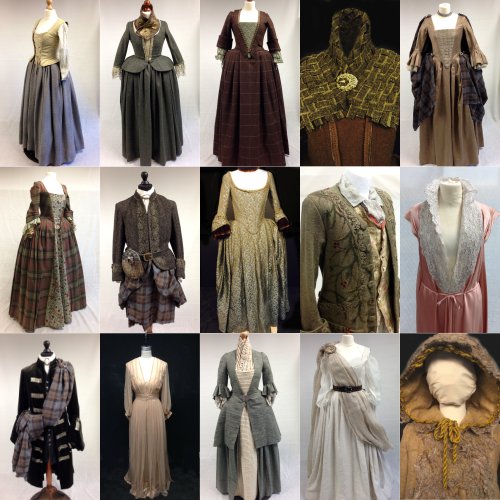 The different, fabrics, buttons, design all go with the character that wears them as well.

Now, on to another kind of detail.
That of the set design and props detail.
The attention to detail in this aspect has astounded me. When I was in theatre in high school, this was the area I worked in, so at times I tend to pay attention to the  props. It’s become a habit.
Props can be very tricky. You don’t want to put to much and make it look cluttered, but you also don’t want to put too little and have it look bare. Unless that’s what the scene calls for.
These scenes in particular are great in that respect of dressing props. Especially when it comes to Colum’s Hall.
” Banners and tartans hung on the walls between the windows, plaids, and heraldry of all descriptions splotching the stones with color. By contrast, most of the people gathered below for dinner were dress in serviceable shades of grey and brown, or in the soft brown and green plaid of hunting kilts, muted tones suited for hiding in the heather” 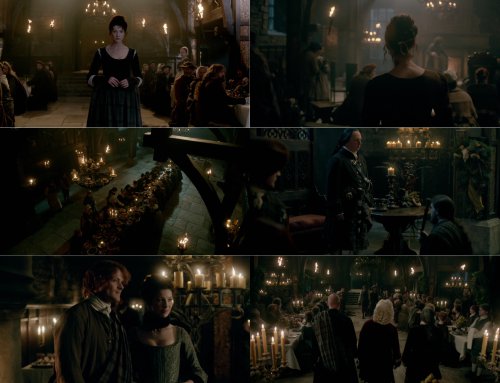 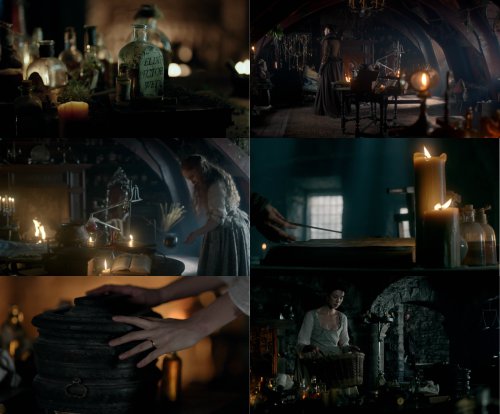 Look at all the bottles, candles, books, tables, chairs!!!  It’s all so pretty (in my eyes atleast).  The wall bookshelf in Geilis’s attic in particular is a work of art.
Alot of times, the props aren’t for that period.So you have age them which might involve some dying, rubbing them against some rough material, staining them. Especially if you have to make them from hand. There is BTS vid on the weapons of Outlander on the 1B DVD. A good little inside knowledge to what kind of wepons they use like muskets, pistols, dirks, shields. On one part ,they use a Scottish Basket Hilt Sword to show you how they aged it. x
Now dressing props aren’t the only important ones. There are hand props. For me, that’s one object in particular that the character has in there hands and has a specific purpose or there’s a story behind it. Didn’t realize how much stuff there was, did you?
And there is waaaaaaay more than these pics. “Lallybroch” and “The Search” are more great episodes where props are a wonder to look at.
Coincidentally, Terry’s website is great source material for info about the pearls and the ring. The DVD extras help, too.

These people have worked hard. These people are awesome and without them, Outlander would not be the same.
All the other departments deserve some recognition. Makeup (special effects, wigs) , lighting, sound, all the assistants, and extras.
Now, let’s consider the actors. Specifically Sam Heughan and his attention to detail with Jamie. We all remember that moment when we saw it. Two words : the glint. Don’t remember?
“……….When I woke in the dark under the tree on the road to Leoch, with you sitting on my chest, cursing me for bleeding to death, I said to myself “Jamie Fraser, for all ye canna see what she looks like , and for all she weighs as much as a good daft horse, this is the women for you” Outlander pg 438. 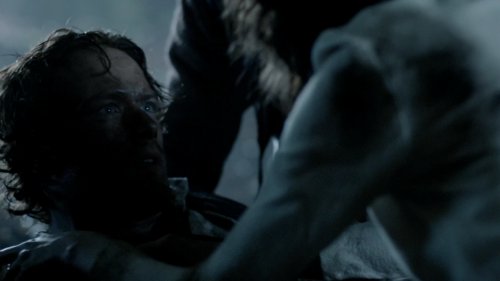 And WHAM BAM!!! Jamie Fraser everybody.
That’s one of the few little nuggets we see. Another is when Jamie is nervous, he twiddles his fingers slightly. Sam added that during “The Gathering” scene. We also have the little smile in “The Wedding” ep when Jamie falls asleep. In the book, Jenny points out that when someone touches him and he smiles, it’s a sign he’s happy. It just wouldn’t have been the same if Sam hadn’t have put in Jamie’s little quirks.
Don’t worry. I’m not leaving Cait out. I can’t remember if it was in an article or video interview or BTS video, but in it was said or stated that she got really good at doing the nursing parts, like bandaging, and doing certain ties. So, on set, there would be a person who is trained in that field to do some of it for her. She would go back and redo whatever that person did and she would end up doing a better job at it. She also helped out Terry with the first wedding dress. She brought a picture of her grandmother in the 1940s to show Terry what she wore. These are are more of characterization detail and Cait connecting more to who Claire is. It transcends on to the screen.
I know I missed things. With a show like this, you could spend days on listing everything. But, hey, that’s actually a good thing to have. It just makes the show more genuine. I can’t be the only one the feels how nice it is that a show is doing the book justice.
So, what is your favorite detail in the show? What detail did you wish they kept?