email
Okay so the title did get your attention.

I am writing this to wake you up.  You, the women readers and TV watchers, and the men who have a conscience and a heart.  I’m asking if we’ve gone backwards in time?  Our role, our rights as women, I mean.
So let me explain….

Like a good proportion of us, I came to Outlander first through the TV show.

I came for Claire.  I had had enough of male character-led shows, and when on Showcase (Canada) last winter, I read the description of a show where a woman travels through time.

Lead character a woman. ?
Historical time travel. ?
Now having said that, I stayed with the show because of Jamie and Claire.  I recall my hook moment was EP 3, that very moment when he so sweetly reached for her hand and led her to the seat he saved for her in the Great Hall. 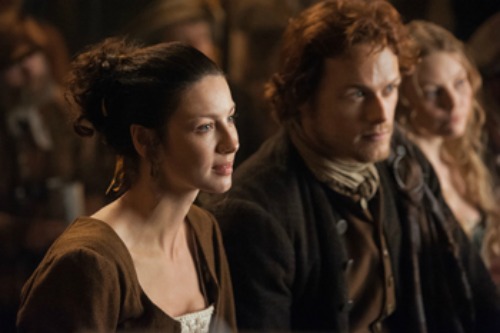 I stayed even longer – EP 7, 8, 9, special shout-out to EP. 10 – because there was an equality and respect in their relationship I hadn’t seen before on TV. And some of the best sex.
Like. EVER.

Sex where the woman gets as good as she gives. ?
This was no girl-suppressing, girl meets boy, girl gets consumed by boy, show.
Diana, of course, is the champion behind all of this. Her books, which I’ve now scrambled to read, were ahead of her time in creating an empathetic, forward thinking and exceptionally intelligent female character from the 1940s, let alone the 1700s.
For the TV show, we also have the amazing women writer/producers Toni Graphia, Anne Kenney, and especially executive producer extraordinaire Maril Davis to cherish for their faithful and sometimes even enhanced adaptation.

And of course, let’s not forget Anna Foerster, one of very few female directors asked to direct TV shows, and who directed 25% of Outlander’s Season 1 episodes. (As I write this, the Equal Employment Opportunity Commission (US) is contacting female directors to learn more about rampant discrimination in the industry.)
Kudos also go to male allies Matt Roberts and Ron D. Moore. Matt is a gem, and seems exceptionally akin to the needs and sensibilities of women as evidenced in his writing and producing (the guy must have had a good mother or female influences).  Ron championed this female-driven character show, and has tried for years to uphold women characters, even in the hard-to-do male-dominated sci-fi world (see Star Trek below). 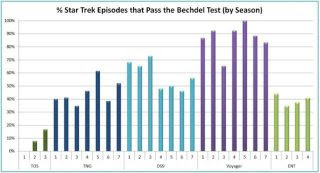 What the heck is a Bechdel test, you say? Well, the test was developed to measure Hollywood’s “sexism output” in its final product- the film or TV show.

In order to pass the industry-standard Bechdel test, the film or episodic show must meet the following criteria:

Now of course, even the creator acknowledges that it’s far too simple of a measure and it sets the bar really low.  But still, it does not happen in every Outlander episode.  Seriously!

That said, Claire’s no piece of man’s meat, either.  The test has since evolved into the Mako-Mori test (yes named after the Pacific Rim character), which of course, every episode would pass:

Try either of these tests on the TV shows and films you watch.  You’ll be surprised, and not in a good way.

For Outlander, as the novels (and hopefully new seasons) progress, the story arcs will continue to enthral us.  And of course, that includes the epic romance she shares with Jamie.

(SPOILERS AHEAD FOR NON-BOOK READERS)

Outlander has certainly shown that there is life, and more importantly, sexual fulfillment after 37 (I’ll come back to this) and woah! even after 60 and 70.  Like the title infers, Claire gives and gets at every age.


So why wouldn’t we believe sex, no great sex, isn’t possible for mid-aged or older women in film just as we do in our books.

More than merely enduring mid-life/older-life sex, the Director of the Kinsey Institute on Sex says that not only are people 50-80 still enthusiastic about sex, a good proportion say it’s better than they’ve ever had. (Seriously, how intuitive is Diana?)
So while Sam Heughan, our beloved Jamie Fraser, will no doubt play other romantic roles long past Outlander and have his fair share of young starlets in various sexual positions as his co-leads, could the same advantage be offered to Caitriona Balfe?
Think again while you watch THIS (Note: NSFW- uncensored version)

But that’s not really happening to actresses, right? A last fuckable day?


Tobias Menzies’s former “The Honorable Woman” co-star, Maggie Gyllenhaal, knows from experience that age is disadvantageous to women actors.  At the ripe old age of 37 (see earlier reference) she was deemed too old to play the lover of a 55 year old.

Emma Thompson, Zoe Saldana, Anne Hathaway, Liv Tyler, and Cate Blanchett  have all stepped forward with their own sexism/ageism stories. Meryl Streep once told Vogue, “Once women passed childbearing age, they could only been seen as grotesque on some level.”

Why is TV/film continuing to degrade our senses by substituting a younger female?

Perhaps worse are the stories of screenwriters who pitch their ideas only to be told to change the gender of their original female lead.

Caitriona Balfe is such an amazing actress.  I hope to see her lead or co-lead, with sex scenes, in many successive productions during and after Outlander.  At 36, 46, 56…

The same goes for Laura Donnelly, for Lotte Verbeek, and the myriad of actresses we’ll meet in successive seasons (fingers and toes crossed). 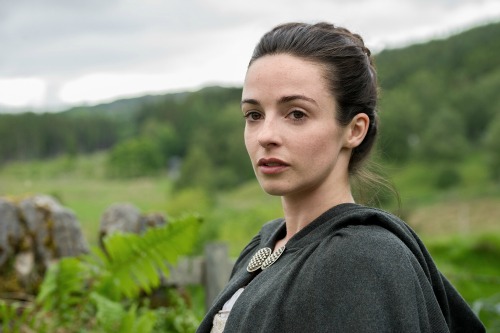 Why are We Still Having this Discussion?

And since we are speaking of issues facing women, what about compensation – net pay and profit share. Equal pay for equal work?  Today, sadly, still no.

The top paid actress in Hollywood only makes as much as the 10th highest paid actor.  Robert Downey Jr. makes twice as much as Angelina Jolie and Jennifer Lawrence, COMBINED.  Amanda Seyfried only made 10% of what her co-star made in a blockbuster film. Recently, the leaked Sony emails revealed that both Amy Adams and Jennifer Lawrence made 2% less (in profits) than their less popular “American Hustle” male co-stars for a film that grossed $150m.

And the financial risk for taking on female leads?  Well, in 2013, films centered on a female made ? MORE than those centered around a male.

And women make less?  Why. Oh. Why. Is. That?
So mes filles et mes alliés masculins (bring on DIA!), women still have a ways to go, unfortunately.  Let’s keep the momentum going by also seeking out shows and movies with female leads with their own story arcs, like Outlander.

“It’s a subtle changing of social expectations, to a point that media companies don’t hold all of the deciding power, but people do.” — Morgan Kraljevich

Just being aware of these issues makes us all better women and wiser media consumers.

Do you think Cait earns at least as much as Sam?  If not, why not?