Note: the end of this post contains a spoiler

Now before all you Church of Diana members get belligerent about this headline, let me say this.  Diana Gabaldon is a genius.  Seriously.  The woman needs to leave her brain to science.  I am among Diana’s legions of admirers who with every line, every word of her novels, shake my head and think to myself, “How the heck does she do that?”  But, there is an instance where Ron Moore and his casting and production team actually beat Diana at her own game and that’s with the incomparable portrayal of Murtagh FitzGibbons Fraser.  Here’s how Duncan Lacroix’s interpretation of the ultimate Godfather improves even on Diana’s vision.

It took me a minute to realize after reading Book One and then tuning into the STARZ series that physically TV Murtagh was distinctly different then Book Murtagh.  Described in the books as a rat-faced, little man – short, slightly built but sinewy as a gibbon, with long simian arms, a low brow and narrow jaw.  Huh?  TV Murtagh may have a low brow – taken up almost entirely by his bushy eyebrows – but that’s where the resemblance ends with Book Murtagh.   Rat-faced, little man, short – Hmmmm.  That sounds a lot like Stephen Walters’ Angus Mohr!    I really can’t imagine Stephen playing Murtagh.  Can you? 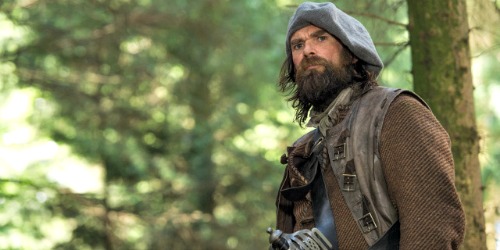 It’s true, the actor that plays Murtagh is a hulk of a man.  Duncan Lacroix is 6’2 and a British stage and television actor.  Quite different physically from the description of Book Murtagh.  And, for me, because of this obvious physical difference, Murtagh’s true nature is juxtaposed so nicely and visually enhances the story more so for me than Book Murtagh.  Let me explain.

As Jamie says to Claire with regard Murtagh – “still waters run deep.”  Murtagh is a man of few words.  Throughout most of the first novel, we hear little more than a cryptic “mmphm” out of him most of the time.  Murtagh doesn’t say much because he doesn’t have to.  He’s known for his reputation as a fighter.  Mysterious, dark, always lurking in the background and watching after Jamie.

Book Murtagh does indeed lurk.  I’m aware of him but for me, personally, he doesn’t really stand out.  Enter Duncan Lacroix and an obvious decision on the part of the showrunner and producers of the STARZ Outlander series, that this man – this character – needed a make-over.  The first time for me that Duncan/Murtagh stands out is in Episode 103, “The Way Out” in the Great Hall at Leoch when Murtagh tells Claire that she shouldn’t tease Jamie for his dalliance with Laoghaire saying, “If her father or Colum come to know about it, young Jamie could get more than a bloodied nose.”  To which Claire retorts, “Like a wife?”  Murtagh responds, “Maybe, but that’s not the wife he should have.”  “He needs a woman, not a lassie and Laoghaire will be a girl until she’s 50.”  I’ve been around long enough to ken the difference.”  In the book, these words were actually ascribed to old Alec from the Stables.  But, SO much better to give those lines to Murtagh as we begin to really understand that there is a lot more bubbling beneath the surface of Murtagh’s rough exterior.

In fact, we begin to understand the deep love and devotion that he has for Jamie as he looks to both protect and guide him forward in life and in love.  We understand more about the relationship and the deep connection to Jamie and his mother when we see Jamie ask Murtagh before the wedding whether his mother would approve of Claire.  Again, lines taken from another part of the book but so much more powerful inserted into this scene and delivered by Duncan.  “Your mother had the sweetest smile.”  “Claire has that same smile.” 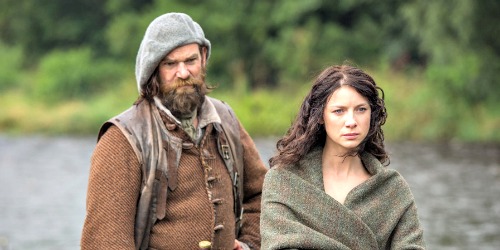 Next comes the blossoming of TV Murtagh in Episode 114, “The Search.”  This episode was a total expansion of the Murtagh character – a lot of new material and lines layered over book scenes and the search for Jamie.  First off – he speaks!  Murtagh/Duncan uttered more words in this episode that he did in the 13 preceding episodes!  We really begin to understand what is driving Murtagh to push both himself and Claire to execute what is frankly, sort of a ridiculous plan to locate Jamie.  And, we get a chance to see Murtagh’s subtle humor with lines that only Duncan could deliver.  For example, “You two are natural outlaws,” referring to Jenny and Claire.  Or reacting to Claire saying she won’t question his plan anymore “yeah, until we get back to the horses.” Cue the eyebrows! 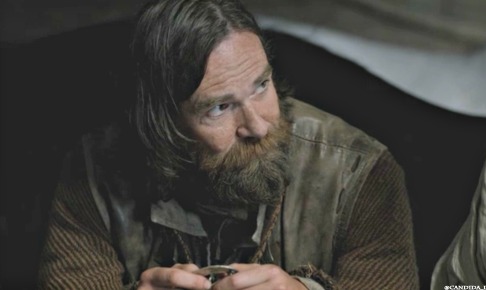 And, then there was the Tale of the Tusks.  Murtagh’s revelation about the bracelets was pulled from another part of the book, but seriously, could you think of a better scene or setting for this exchange between Murtagh and Claire?  We get it.  This rough looking hulk of a man is a romantic idealist.   He has stayed in love with the idea of someone his entire life.  It’s all black and white with Murtagh.

He promised his love, the wife of another man – a rival nonetheless – that he would spend his life protecting her son, who he now considers HIS son.  Talk about tenacious.  We see in Murtagh’s heart wrenching scene with Claire in the cave that his loyalty will never be shaken — either to Jamie or to the memory of someone he once loved but never possessed.  And, again, Murtagh refers to his loyalty to Jamie’s mother in the no-translation-needed scene at Jamie’s bedside in “To Ransom a Man’s Soul.”  You absolutely DO NOT need to understand Gaelic to know what Murtagh is trying to say.  Brilliantly acted and delivered lines from a gruff, imposing Murtagh.  But, the dichotomy of his physicality and the sincerity of his words only makes it more believable and this character more endearing. 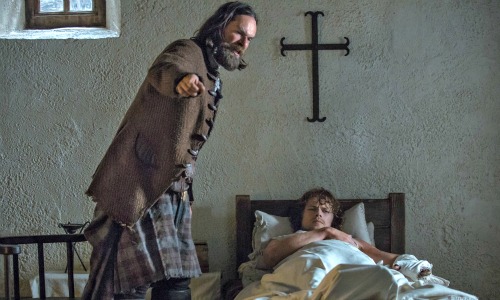 Lastly, I want to leave you with two images of Murtagh/Duncan Lacroix.  First, Episode 116 “To Ransom a Man’s Soul.”  It was the scene showing the brief profile view of Murtagh carrying a beaten and broken Jamie from Wentworth prison.  I remember thinking at the time I first saw that scene – “Wow, Jamie is a big guy – and yet Duncan/Murtagh so easily and gently carried Jamie to safety.”  Can you imagine Book Murtagh doing that?  So poignant.  So strong.  So Murtagh.  Goosebumps.  And, then in one of the last scenes in Season 1, also in Episode 116 “To Ransom a Man’s Soul,” – the image of Murtagh walking up besides Jamie and Claire as they embrace aboard the Cristabel – never saying a word but with that subtle smile and beard pull.

And, as the Cristabel sets sail and the camera pulls away – you see the Godfather at the bow of the ship – keeping watch – always keeping watch.   Duncan/Murtagh had NO lines in that final scene.  No words.  Just that hulky physical presence conveying so much meaning as Jamie and Claire set off for an unknown future.  Sorry, but that image wouldn’t have worked with a man the stature of Book Murtagh.

Like many of us, I dream of meeting this wonderful cast.  But, here’s the thing – I would run right past Sam Heughan and straight to Duncan Lacroix if I ever had the great fortune to encounter the Outlander crew.  To me, it’s the best character expansion of the TV adaptation and certainly one place where Ron Moore and company got it RIGHT.

Now, Ron, how about letting Murtagh survive Culloden???
Do you think TV Murtagh is a better version of Book Murtagh?  What’s the quality in Murtagh that you admire the most?