The French Connection?? Gene Hackman?…no, not that French connection…


As the excitement of award session wanes, we await the upcoming season 2 of Outlander with hints from the Outlander crew about  how amazingly 18th Century France will be portrayed.  After which, to quote Sam Heughan, “ . . . we go back to Scotland, where we go back to the blood and mud and gore”.  Did you ever wonder why Claire and Jamie are headed to France with the expressed purpose to change history? Or is it the future? Whatever.  In the season finale, we are told there are Frasers in France. But why? And what is Bonnie Prince Charlie doing there?  Is this some French getaway package that he got on Priceline….oops, time jumping.

This will be part one of two posts exploring some aspects that will hopefully enhance your experience reading and viewing Dragonfly In Amber.
Why did the Jacobites turn to France?
That can be traced to a long, often hostile, always tense, connection between England and France, whose roots go back to 1295.  Edward I’s attempts to bring Scotland under English domination were thwarted by an agreement between John Balliol, King of Scots and Phillip IV of France. That agreement is now referred to as the Auld Alliance; for any aggression undertaken by England toward one of the partners, the  other will subvert  those efforts by invading English territory.
As  England’s Plantagenets (circa early Middle Ages) fought with the House of Valois over territory and the French crown, many of the French victories were aided by contingents of clansmen.  Accompanied by the sounds of bagpipes, Joan of Arc’s success in Orleans (1429) came with the assistance of 60 Scots men at arms and 70 archers.  Reportedly,  Pope Martin V commented that “the Scots are well-known as an antidote to the English” ( thought I heard that on ESPN…oh wait, wrong reference, there I go again…time jumping).
This military and diplomatic partnership would reassert itself again and again, not only during the Hundred Years War, but also in the Scottish Wars of Independence (1296-1357),  the Battle of Flodden (1513) and Henry VIII’s Rough Wooing (1543-1551) (refer to my prior post on the Mackenzies for  more on Henry, the matchmaker).
Mary, Queen of Scots may be seen as the personification of these ties;  the daughter of Mary of Guise and the Queen Consort to Francis II.

What was Jared Fraser up to?

There was an economic advantage as well. Coal, wool, animal skins and of course, whisky  from Scotland in exchange for wine, salt, luxury cloth, furniture from the French (so we can surmise that Jamie’s cousin, Jared, was taking full advantage of the wine and spirits exchange).  France’s expansion policy meant they needed fighting men and clan society had a ready supply of well trained clansmen. That certainly came in handy for Jamie, when he escaped Fort William after his second lashing. Not only did France provide a haven for him, but  a job as well—he was one of those hired mercenaries for the French military. Many settled there, as they were granted lands and titles in the land of the Franks.
Who’s Guarding le Roi (the King)?
Charles VII of France established a royal elite guard, the Garde Ecossaise (the Scots Guard) in 1415 and for the next 100 years, was composed entirely of Scotsmen. This elite guard  served as the personal protectors of the French monarch accompanying  him at any official event, holding the keys to any city he visited and essentially anyone who wished to approach His Royal person had to be approved by these men.  Scotland, in turn, reaped the benefits of trade  and cultural exchange from the country which epitomized high culture; while the University of Paris had several Scots serve as Rector (back in the day, that was a powerful prestigious position). 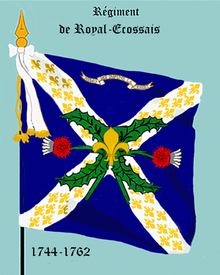 Like any relationship, there were times when the ties that bind were rather strained, especially after Reformation, when much of Scotland declared itself Protestant.  The formal alliance ended in 1603, once James VI of Scotland ascended to the throne of England as James I ( because Queen Lizzy, the first one, had no direct heirs).
Yet, despite this pivotal event, centuries of mistrust toward the English were hard to set aside and though united under a Stuart monarch, the two countries remained separate and independent of each other.
“Never forget that you’re English in a place where that’s not a pretty thing to be.“ (Jamie, Outlander: Episode 102)
By the next century, with the passage of the Act of Settlement (1701) establishing a Protestant Hanoverian as the successor to the last reigning Protestant Stuart monarch, Queen Anne, the English parliament was extremely concerned about  what was happening up north. Because in 1704, the Scottish parliament’s passage of the Act of Security bestowed upon itself the right to choose a successor of their own and different from England’s choice.  England was not pleased— worried that an independent Alba with its own monarch would create alliances that might have conflicted with England’s interests…( parlez-vous Francais, anyone)?
Scotland, on the other hand, was on the brink  of economic collapse and desperately wanted England’s retaliatory trade embargo revoked.  In the end, the Scottish parliament acquiesced by forced circumstances and bribery to English power. By 1707, with its passage in both parliaments, the Act of Union united the two kingdoms into Great Britain, not only one monarch but one government.
Although now officially united with England, Scotland retained its links to France, though not in an official manner.
Since the 16th Century, a wealthy, educated Scottish presence had been established in France. By 1611, over 25% of France’s fighting men were Scotsmen or their descendants. Holding powerful positions within the French military, the Scots also obtained land grants for their service thereby becoming titled landowners in Gaul in addition to becoming influential merchants. This Scottish diaspora’s loyalties remained steadfast to the Stuart cause.
By utilizing their influence within French society, as well as reinvigorating their historic Auld Alliance ties, the Scots in France would do all they could to gain the support of the French crown to re-establish a Stuart monarchy in Britain.
The Glorious Revolution-Not So Much for the Stuarts
In 1685, James II ascended the throne following his brother’s (Charles II) death.  The Protestant political establishment, however, felt a distinct unease in a Roman Catholic monarch with pro-Frankish tendencies, including suspicions of reasserting an absolute monarchy.  As long as his Protestant-raised daughter, Mary, remained heir-apparent, a state of detente existed. This dramatically changed when his second wife provided him with a male Catholic-raised heir, James Francis Edward.  With the deposition of his father, James II in 1688 and the death of Queen Anne in 1714, he was left as the sole remaining Stuart with a claim to the throne.

Acknowledged as James III of England and James VIII of Scotland by his cousin, Louis XIV of  France, as well as by the Kingdom of Spain, the Papal States and the Duchy of Modena; Great Britain would have none of it and neither would its German-speaking, Protestant, Hanoverian King George I.
Not only did each view the other as evil heretics, but the two powers were developing separate divergent political realities.  In Britain, a system of restricted monarchial authority was evolving while in France, the king ruled without limitations. So for the British elite, a Catholic Stuart was a threat to their authority.
So What’s In It For Louis?
What compelled the French to support the Jacobite cause? Was it solely an obligation of friendship that was linked to the Auld Alliance?
That was partially true; but there was also a historic enmity toward England with roots of discord possibly tracing all the way back to 1066, when the Norman Duke William crowned himself king.  Warm and cordial would hardly describe Anglo-French relations. Centuries of tension  ensued between them.  Medieval conflicts could be summarized as inter-feudal rivalries amongst baron lords but, by the 1300’s, as the English and their kings united under a cohesive English identity and language (with William I’s invasion, Norman-French was the language and culture of the kings and barons) the wars against the French took on a more nationalistic undertone.
For the next hundred years, France and England engaged in battle after battle undermining the other’s attempt to become the world power of Europe.  After the Hundred Years War (1337-1453), with each nation’s borders fairly established, the battles then turned to conflicts which involved religious polarities and territorial/dynastic disputes in other parts of Europe and the New World.
At times, the two formed short lived alliances if another power player was seen as gaining the upper hand, such as Spain.  But with the ascendency of le Roi-Soleil, the Sun King, Louis XIV (1638-1715),  France took on an expansionist policy that was not restricted to just Europe.  Britain was very concerned by what it viewed as Louis’ attempt to create a universal monarchy in Europe under his rule. Believing in his Divine right to rule with absolute authority, this king reigned in the aristocracy’s autonomy and centralized governance.  In supporting the Jacobite cause, France would accomplish two things: 1) a Jacobite monarchy would be pro-France and 2) rid itself of a rival power player.
“I’ll Be There For You”…..Maybe
Rachel, Monica, Phoebe, Ross, Chandler and Joey were there for each other…well, usually (there I go again time jumping -1990s TV  show, “Friends”) but was Louie of the number XV there for Charlie?…meh, not so much. 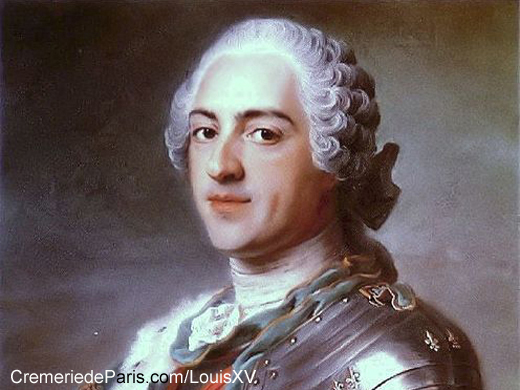 In 1715,  the 5 year old great grandson of Louis XIV inherited the throne, but  he was no Sun King.  The excesses of Versailles, as well as costly military campaigns were beginning to tarnish the veneer of this powerful monarchy. As a Catholic king, he naturally felt a Stuart monarchy would benefit France but by the time the Jacobite forces entered England, the French troops, which Louis promised, never arrived. It’s forces were primarily being utilized in The War of Austrian Succession (1740-1748). With the Holy Roman Emperor, Charles’ VI death, his daughter’s inheritance was challenged, pitting a multitude of European nation-states against each other;  including a series of battles involving  the French and Prussian  armies against British, Dutch and Austrian forces. 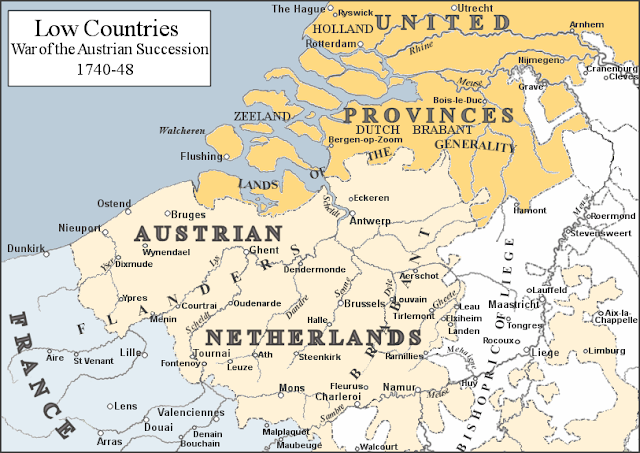 By supporting a Jacobite rebellion, France hoped to divert British forces away from the Continent. That plan did not come to fruition, as the French consolidated forces to push north-east into the Rhine.
It was under this Louis (the XV) that France would lose most of its territories in the Americas (from the French point of view)  to the ‘piratical’ nation across the Channel. The British, a superior naval power , was now matched by an experienced, superior ground force.  A ground force whose training ground included Culloden.
Next post, we’ll explore some aspects about the Jacobite uprisings…”back to the blood and mud and gore.”
“What do you think they will show in season 2 of Outlander as it relates to the French connection?”