Going For Baroque: The Sounds of St. Germain

email
Source
Recently, Bear McCreary sat down with Adam Chitwood over at Collider.com to talk Outlander season 2, more specifically, the drastic tonal shift the music will take.  We’re heading to the 18th century Parisian court, dear readers, and as a musician myself, this gets me really excited.  Don’t get me wrong, I love some good bagpipes as much as the next wannabe Celt (I’m actually German and Norwegian), but nothing gets under my skin like the decadence of the harpsichord and, unless I’m totally off-base, I’m guessing we’re gonna get oodles of it in season 2, while Jamie and Claire play deadly cat-and-mouse with international politics in silk-walled salons. Additionally, nothing underscores the coy flitting of a fan and a cutting side-eye like the keening of violins. I’m kvelling already!
No slouch in the research department, Bear decided to check out the credentials of the real life Comte de Saint-Germain.  Turns out, not only did he get named-dropped by none other than Giacomo Casanova as an excellent dinner conversationalist, he was also a composer of some note. 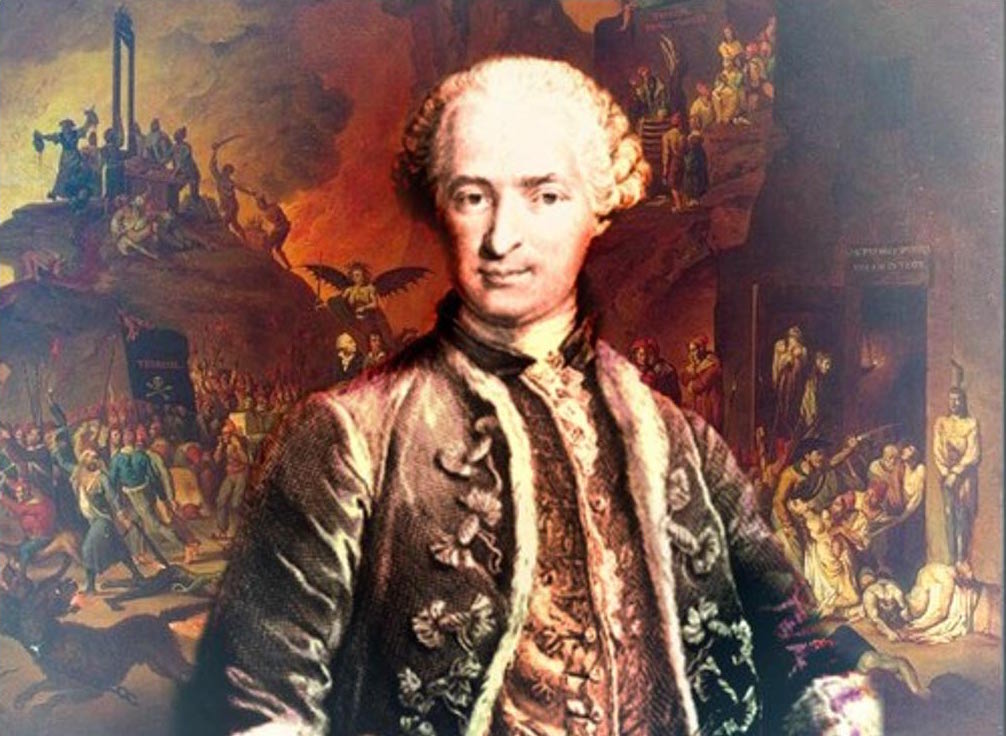 Source
McCreary geeked out over this, as he should, and listened to all the pieces he could find until he stumbled on one he both loved and fit with Diana’s portrayal of the Comte as a literary character.  He then developed the piece into the score as St. Germain’s musical theme.  This will certainly give more organic depth to an already intriguing villain who very well may be immortal.
Wait . . . what???
Yeah, you can find some really strange stuff on the internet and researching this piece was no different.*
Even stranger still is the “alternate” wiki entry for St. Germain which states that he was also known as Master Rakoczi or Master “R”. Oh, really? I’ll just let that simmer, because, book readers, you KNOW that is an odd bit of character cross-over.
Having listened to a playlist of St. Germain’s compositions while reading up on the man in question, I have some small notion of what his theme might be.  It needs to be mysterious and not your typical bright delicate water music, which sums up most of his body of work. First and foremost, it’s got to be set in a minor key.
My guess is this one:
However, you can take a listen to a concert by Ensemble Phoenix and make your own guess.  It could be any or none of them, but there are far less enjoyable ways to pass an evening than drinking wine and listening to baroque chamber music.
To be honest, this is kind of elevator-baroque, so I don’t expect most of Bear’s score to be based on St. Germain’s work. When I think of the sound of Dragonfly in Amber, I think of another film score I’ve fallen in love with:
Once you’ve finished writhing in ecstasy at the beauty of exquisitely performed Handel, you should probably pour yourself your own fat glass of wine and listen to the whole soundtrack.  Sure, it might not be what Bear had in mind, but in MY mind . . . nothing ratchets up the drama like a soaring soprano (even a male one).
So now it’s your turn.  What other composers do you think Bear McCreary has sought out as inspiration for the Parisian scenes?  Who is your favorite baroque composer?
*Special thanks to my husband, Jordan, for finding both the Ensemble Phoenix concert and the hilarious video of the crazy lady “channeling” St. Germain. (Bet you’re clicking that link NOW, aren’t you?)