UPDATE: Several hours after this post was published yesterday, STARZ informed some Facebook Outlander fan groups that the event on April 4th in New York City would be a “private” screening for Media, industry and contest winners and not open to general fans.  Let us know how you feel about this turn of  events in the comments section below.

Occasionally I write news pieces for this Blog in addition to original content.  You can’t imagine how much fun it is to be able to obsess over my favorite television series (and books) and then have a forum on which to report on the latest casting or production news or expound on all my deepest, darkest Outlander musings, feelings and expectations.  But, with less than a month now until Season 2 premieres, I find myself breaking into a cold sweat, experiencing heart palpitations and regular outbursts of anger and anxiety.  Because the Outlander Cast Blog is written by fans for fans, I am guessing many of you feel the same.  Droughtlander taking its toll, you say?  Well, not quite.  Read more about the reasons for my anxiety after the jump…

I do have a regular job — one that keeps me pretty busy, pays me well and which I love.  But, these last few weeks I have been completely pre-occupied.  Ever since the actual date of the broadcast premiere of Outlander was announced, I find myself neurotically scouring the Internet multiple times throughout the day and night for any news on Season 2 and, most importantly, what STARZ/Sony has planned for the Premiere.  In the past STARZ has held ticketed Red Carpet Fan-centric events where they pre-screen the new season’s first episode days before the actual broadcast premiere.  While limited in terms of numbers of fans that can be accommodated, there was still a chance a regular fan could score a ticket. And, score one I did last April for the Mid-Season Premiere of Season 1, part 2, in New York City.  Granted, I waited in line 7 hours and made it into the second show by the skin of my teeth — but made it in, I did.  And, I enjoyed every stinking minute of watching Episode 109 days before most others could and being within a stone’s throw of our favorite Outlander stars, who made a quick appearance before dashing off the stage. 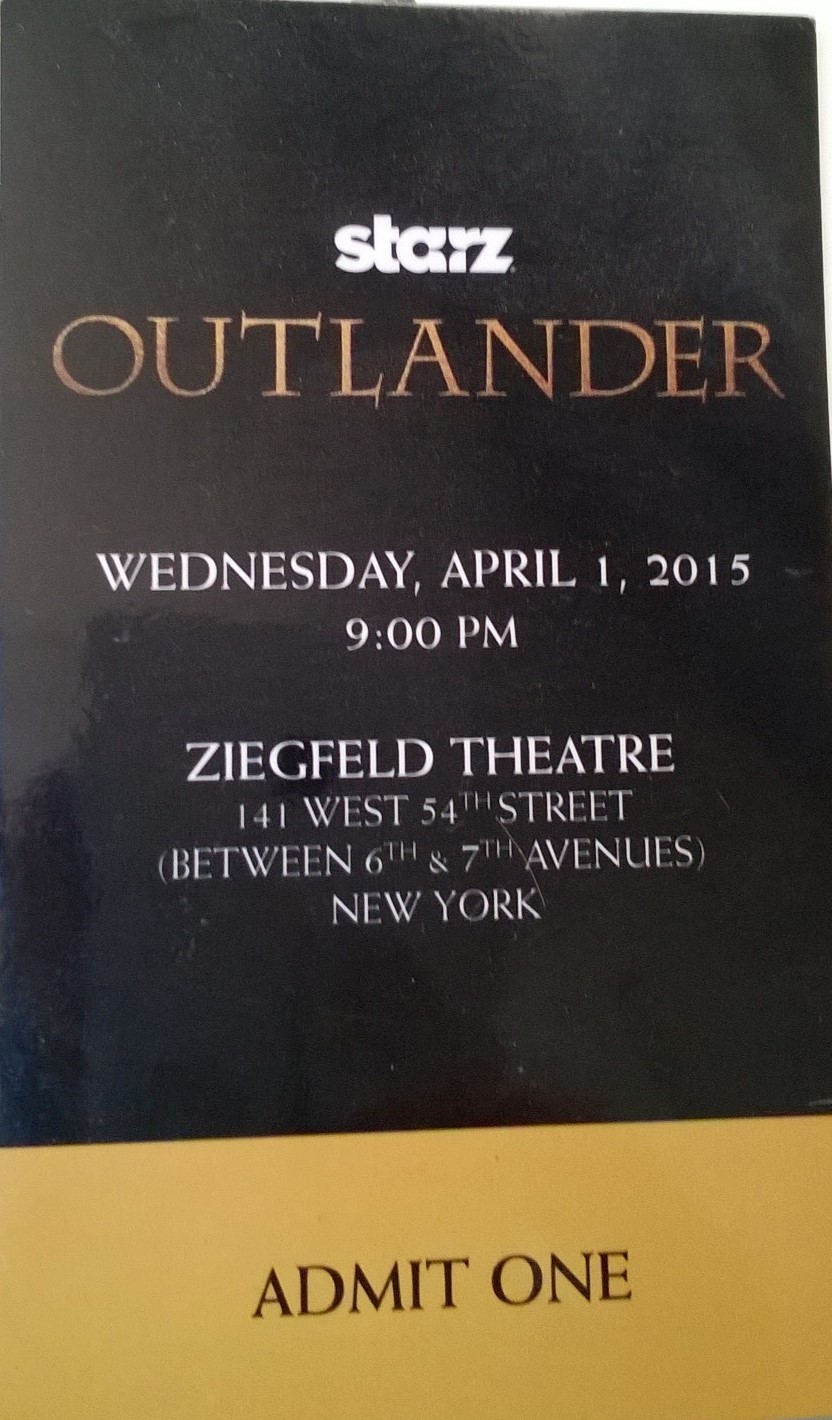 But, now as Season 2 approaches and we have an air date, I wait…checking Outlander STARZ’s Facebook and Twitter like a woman possessed looking for any details about a Premiere Event.  Last week Facebook flashed a “memory” post from my timeline last March.  It was the date I scored my ticket for the Outlander Mid-Season Premiere in New York — March 6, 2015 — for the event on April 1st.  This unfortunate reminder (eff you very much Facebook!) made me think that last year we knew what was happening by this time. 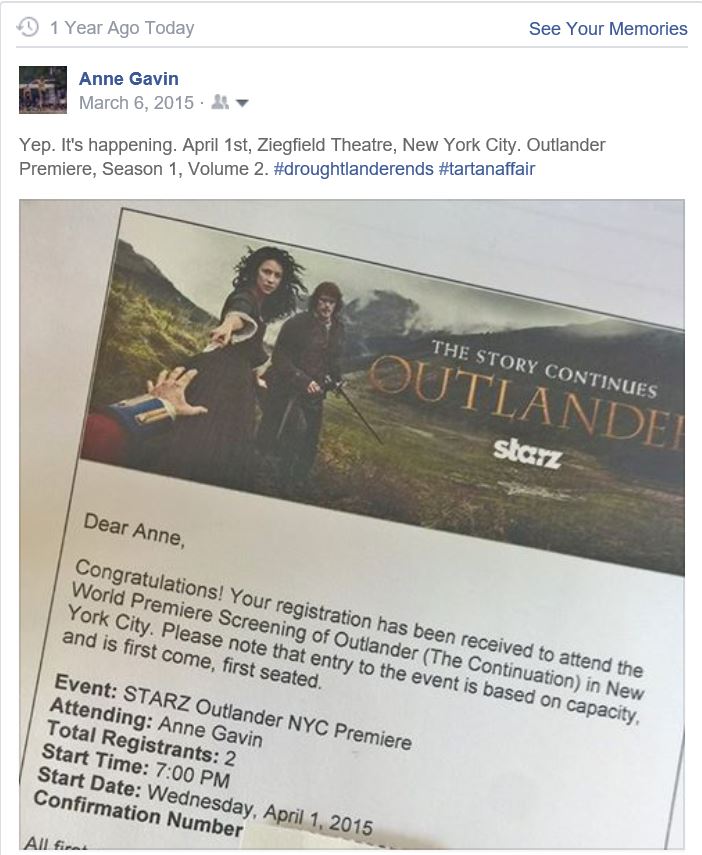 I have posted on the Outlander Starz Facebook page — respectfully, of course — asking…begging for any information about a Premiere Event in New York City.  Canadians and New Zealanders seem to know more than we do in the States because both networks that broadcast Outlander in those respective countries are offering a contest for tickets to attend the “New York City Premiere” which — according to published contest rules — is taking place at the American Museum of Natural History on Monday, April 4th.  Aha. So, this confirms there is a Premiere Event.  OK.  That’s something, right?  Turns out the American Museum of Natural History has a gargantuan IMAX Theatre inside.  That seems promising and likely to accommodate a decent number of fans all the way up to the nosebleed section.  So, why don’t we know anything more?  Why hasn’t there been something…anything about how a fan can attend the Premiere Event on April 4th?  I even know media who already have a relationship with STARZ PR — including the owners of this Blog — who have heard nothing, nada, zippo about press credentials or any details about the Premiere Event on April 4th.

Then this week we see “The Writer’s Bloc” (a non-profit organization) in Los Angeles announce they are hosting a “Tribute to Outlander” two weeks before the actual broadcast premiere date.  The event is being held at the 473 seat Writer’s Guild Theatre in LA and costs just $10 per person to attend.  Sam Heughan, Caitriona Balfe, Ron Moore, Tobias Menzies and lots and lots of Outlander’s writers and co-producers also attending.  Nice.  And, the event sold out in under an hour!  I am guessing the Outlander Southern California group jumped on this.  Good for them.  Hey, STARZ — I’d be OK with something like this in New York City…heck…I’ll watch the Season 2 premiere at home like everybody else if you did something like what you are doing with the Writer’s Bloc in LA.  But, you HAVE TO TELL US ABOUT IT.  Like NOW!

And, then there is Sam Heughan.  Off, it seems on some “Outlander World Tour.”  We hear he’ll be in Japan and Australia and who knows where else, doing fan events the next few weeks as a build-up to Season 2’s broadcast premiere on April 9th.  In fairness, we do know that Sam will be in New York City presumably for several days prior to the premiere because he is Grand Marshal of the Tartan Day Parade taking place on premiere day, April 9th.   Outlander STARZ is even a parade sponsor.  GREAT.  But even Sam, it seems, doesn’t know who else will be there from the cast or even maybe what’s he’s doing for the Premiere Event given his recent Tweet to series author, Diana Gabaldon.

At “The Gathering” Outlander fan event in Cologne, Germany this past weekend, I made one request of my friend who was attending — to swear to me that she would inquire of every single cast member she met while there whether they were attending the New York City Premiere.  Graham McTavish said he didn’t know and likely had a scheduling conflict.  Duncan Lacroix said (get this) he “hadn’t been invited.”  WHAT?  Seriously, STARZ?  Why in the heck wouldn’t you invite Duncan Lacroix, whose character, “Murtagh”, is wildly popular with Outlander fans.  I mean — this just makes me CRY!  STARZ — what are you doing?

I hate to be a whiner.  Really, I do.  I happily eat up every single drib and drab of Outlander news that comes my way with gusto.  I feel lucky when we get something news worthy enough to include on the Blog.  Because then — I get to write about my favorite fixation.  But, the time has really come, STARZ, to let us know what you have planned for April 4th in New York City and whether there is even a chance for us regular fans to attend.  We are just looking for a little something — a scrap — so we can plan our trip to the Big Apple get a hotel room and yes, meet up with some other fans to dish about Outlander.  Or, if you aren’t doing something for fans outside of Tartan Week events, then just TELL us, so we can lick our wounds and move on.

But, here’s the thing.  That little Black Jack on my shoulder is telling me that this hush-hush approach to the April 4th event may be part of STARZ’s Grand Plan.  Perhaps there will be no “Premiere Event” for fans.  No long lines or flasks of whisky to share while waiting.  No breathless anticipation, no glimpse of Sam or Caitriona on the Red Carpet, no new friends to meet, no talk of most anticipated scenes from Season 2, no Outlander comradery like we experienced at last year’s New York City event at the Ziegfeld Theatre.  After all, STARZ well knows that all of us will be watching on April 9th NO MATTER WHAT.  So, why host a fan event when the network is focused on getting NEW fans?  Methinks that maybe April 4th at the American Museum of Natural History is for the Media Only and a few lucky contest winners.  Just maybe…instead of a “Tartan Affair” it’s a “Private Affair.”  STARZ — say it isn’t so!  And, if it is so, then just SPILL THE TEA and put us out of our misery! 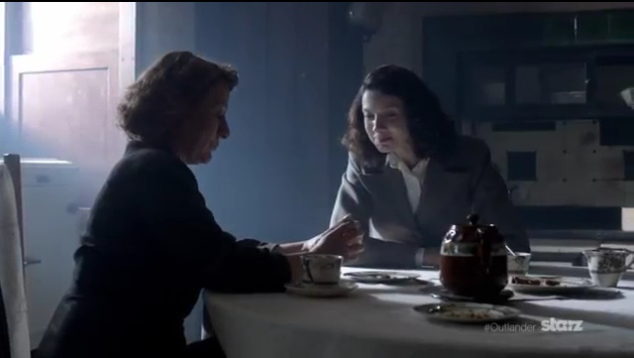 Do you think Outlander Fans will be included in the Premiere Event in New York City?  What are your feelings about how STARZ has handled PR for Season 2 and the Premiere?