The Starz PR Train Rolls Down the Track… Literally.

In case you’ve been living under a standing stone, we are less than three weeks away from the official end of Droughtlander and the April 9th premiere of Outlander season two. That means Starz is down to the wire for a final blitz to lock in viewers – old and new – to its flagship show.  The pressure, oh the pressure.  What’s a network PR engine to do?

Run over them with a train.  Nearly literally.

Folks, I give you the Outlander subway car.

This regal ride popped up in New York City this past week, boasting images of French court life under the header “the etiquette of war.” The inside was given a French makeover, complete with upholstered looking seating and portraits of Claire and Jamie, among other things. Catchy. Brilliant. So. Damn. Original. Or was it?

So you can imagine that our collective heads just about imploded when we saw this because it felt a wee bit familiar to a similar publicity stunt done by another show not less than six months ago.  Okay maybe it’s a lot more than a wee bit familiar – remember Kendra’s awesome post, “Silver Spoons: A Tale of Three PR Campaigns“?  She detailed how Amazon’s big move was to completely redecorate a NYC subway car in such a way that it left riders with one burning alternate history “what if” – what if the Axis Powers had won WWII and America was divided under German and Japanese rule? Why? Because that’s the premise of its critically acclaimed new drama, The Man in the High Castle.   Exhibit A. 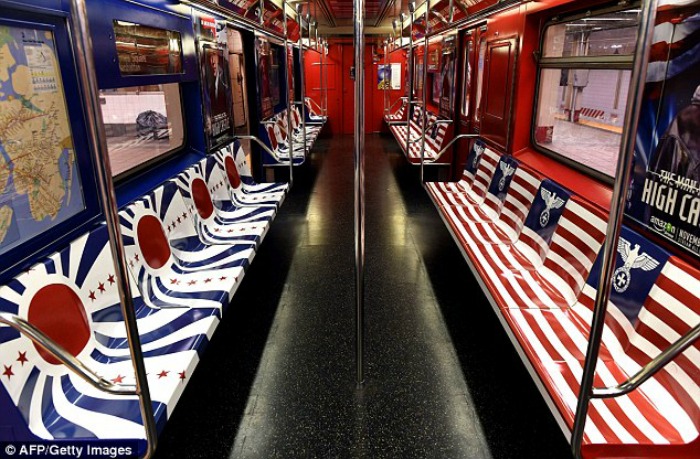 As Kendra detailed – was this approach by Amazon risky given the current political and global relations environment? Yes. Did it stir up controversy? Oh YES.  But was it effective? HELL YES. Before the ads were ordered taken down by Mayor Bill de Blasio, the banter on social channels about the disruptive takeover had already piqued mass interest.  In December when the show launched, it quickly became Amazon’s most-streamed original series and almost immediately picked up an order for a second season.  Who’s to say if it was due to the subway stunt, but we doubt it’s completely coincidental.

Speaking of coincidental, is Starz’s move a little too close for comfort? I’ll let you decide but offer this… as someone who spends her non-Outlander life (wait, there’s life outside of Outlander?) in the land of PR, it’s a daily challenge for those in this field to come up with truly original, never-been-done ideas.  The digital age gives us more opportunity to reach people (a good thing!) but also greater chance they’ve sopped up what you’re serving long before you offer it. They say imitation is the sincerest form of flattery. With Amazon and Netflix shows the trending fan darling of the moment, I imagine all other networks are taking note of what they’re doing to reel in new viewers. For some dreaded jargon, we call it “a sharing of best practices.” Cutting through the crap, it’s just a more professional way to say, “oh good, you did this so I don’t have to reinvent the wheel.”

The question now is, will it be effective from the standpoint of attracting folks who know nothing about the show?  Sub in John Malkovich for Sam Heughan and it’s Dangerous Liaisons redux.  The High Castle campaign grabbed everyone’s attention because it sparked incredible controversy and forced passengers to either choose a side or stand neutral in the middle, the very premise of the show.  Will seemingly gliding in guilded Parisian splendor through the NYC underground with the unwashed masses grab hold of the imagination long enough to translate into new viewers?  Who knows . . . but our guess, here, is no.  The major difference between the two train cars at this junction is people’s reaction to it.  People had lost their minds over the Man in the High Castle subway car.  It was all over the news and subway passengers were interviewed and outraged.  The Outlander subway car?  We could not find a legit news site reporting on it.  There was a small amount of social media buzz amongst pre-existing fans, but the silence from everyone else speaks volumes and lets us know that Starz may not have fully understood the reasons behind the success of Amazon’s campaign.

On the bright side, if you ever wanted to know what it’s like to go into the “world of Outlander” (much like the pre-show voice over always teases), this is about as close as we’ll all generally get.  I raise my glass to the subliminal jabs that were likely dreamed up – all in good fun – in the strategy war room inside the mother ship… “Alright noisy fans, you wanted more general access to Outlander in New York? For $2.75, knock yourself out. Sit down, soak it up, bask in it… until your stop is called. Then hop off and let others ride.”  I’m guessing they stopped just short of putting Sam Heughan’s face on the seat itself.  I mean… you know what, never mind. That one writes itself.

The subway takeover is certainly a one up from the season one promotional images that were sprawled all over buses in New York and Los Angeles. Wait, no it’s not.  Season two has got those too. If it ain’t broke, don’t fix it.

Okay, Starz, you’ve got us on the line… what’s next?

And there it is. That’s right, folks – for those of you (well not you per se, since I know you’ve watched season one on repeat since June. Let’s go with your friends and family members.) that have been staunch holdouts to giving the show a whirl, Starz has cooked up a fail-proof way to break the stalemate – offer the show for free!

From now through April 10, viewers can binge watch season one in its entirety through the Starz website. Did I mention it’s free? Because it is.  I, for one, excitedly emailed about a dozen friends who have yet to heed my constant, stalker-like gentle recommendation to give the show a try. They have no excuses now, and I’m sure that’s not lost on Starz. If at first you don’t succeed, try try again. And again.  Gagging on the buffet of cliches? Me too. I promise that was the last one.

If we’re keeping tabs, these last weeks have netted us new trailers, a dreamy-steamy cover of our favorite pair, news about premiere week events (or lack thereof, as Anne details here), transportation takeovers, free show access and even Saks Fifth Avenue window displays (cue the “well played, Starz” nod on that one – appropriate and brilliant).

It’s a fully integrated campaign comprised of ad buys, social media content, publicity tours, you name it.  My money’s on a clan of kilted men or a gaggle of women in French frocks popping up in high-traffic areas before this thing’s been put to bed.

Will it all add up to big numbers for the premiere on April 9, new viewers, a season three order? Jury’s out, but one thing’s for sure – we’ll all be watching.  Then again, that’s always been our plan.

What do you think of the subway ads – original or borrowed from Amazon?  Will the offer of free Outlander bring in new viewers?