Trials and Tribulations of being an Outlander Fan(atic): What have I done?

My house is a freakin’ mess.  I live in a constant state of guilt.  What kind of world do we live in where someone would choose Season 1 episode 16 over laundry?  (EPISODE 16 people!) And yes, I once tried multi-tasking, during Episode 7 no less, but folded a grand total of two shirts in the process. 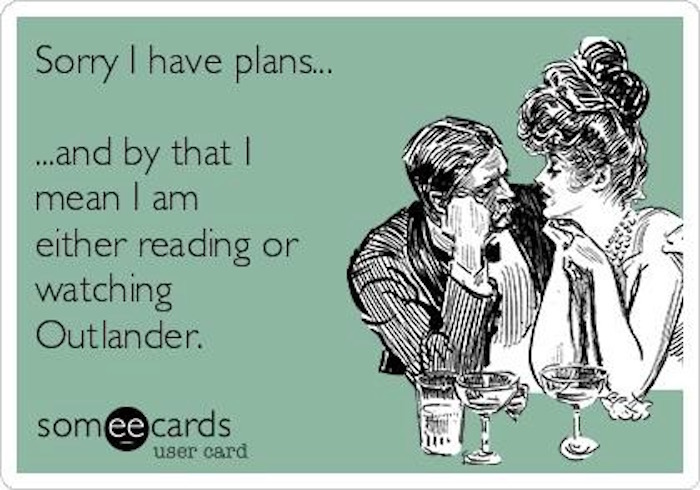 I had three hours today to clean and instead I read two chapters of Voyager, again, and watched one episode of Outlander.  I ended up with one hour left.  So one-third of the results achieved (and that’s a good day).  I’ve learned to adjust and live on lowered self-expectations.  I am an Outlander fan after all.

I am determined, organized, and do have a general priority ranking system:
Outlander > dishes
Outlander > house painting
Outlander > paying the bills (except electricity and cable, which makes perfect sense)
Outlander > walking the dog (oh wait, I listen to podcasts while I walk him, so thankfully he and I are still within the acceptable BMI) 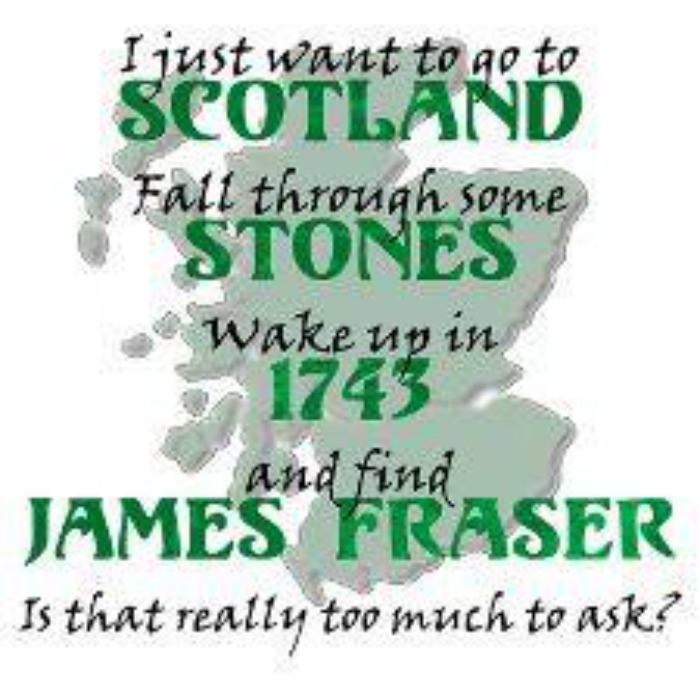 I now live in Outlandia, which is like Portlandia only weirder.  Because it’s the 1700s AND verra Scottish!
I’m linked in through the social networks too.  I now receive “lip biting” photos, or know when any fan takes a pic with Sam on-set. I knew the actual millisecond they cast Roger AND Brianna. I even get a Scottish scenery photo everyday #potd thanks to Matthew B. Roberts. 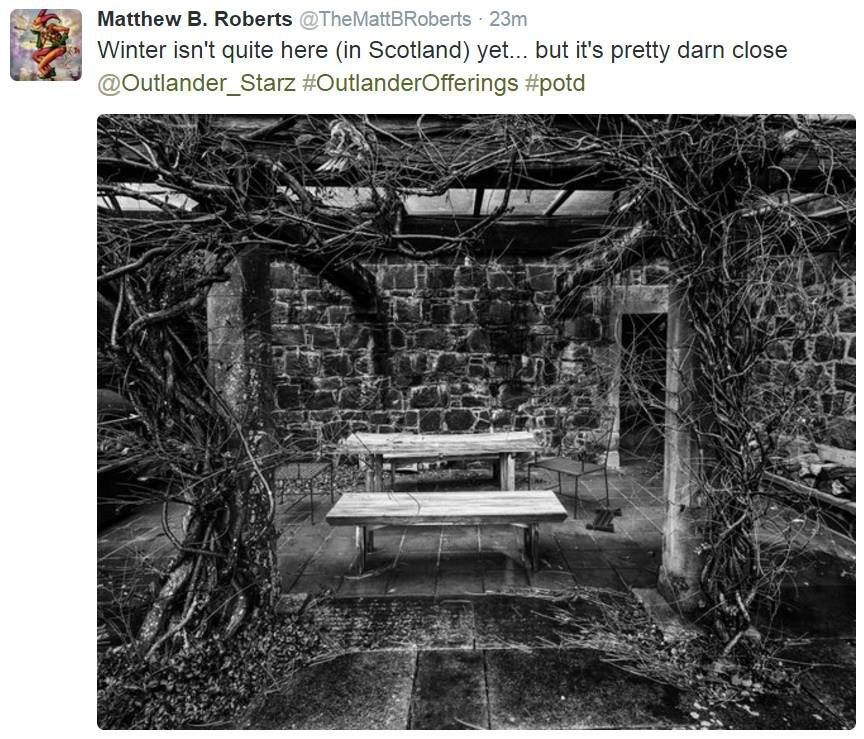 Good god, how did it come to this?  I was going places.  Now I have guilt mixed with self-deprecation?
So I looked it up.  And according to Dr. Google, I am certifiable.
Not only do I exhibit avoidance behavior*, but avoidance conditioning** and escape behavior***.
CERTIFIABLE BEHAVIOUR:
*any behavioral act that enables an individual to avoid anticipated unpleasant or painful situations, stimuli, or events, including conditioned aversive stimuli. (watching Outlander instead of cleaning toilets; the Skye Boat song is my ring tone for work, so I just let it ring so I can listen over and over)

** refers to the establishment of a pattern of behavior that prevents, postpones, or reduces the frequency of aversive stimulation (Outlander>laundry, making dinner, school lunches and/or vacuuming, generally everything else)

*** a response that is designed to move away from aversive stimulus by withdrawal or entering a fantasy world. (Outlander better than the real world, like duh?)
Of course, I’m not alone.  I am part of a tribe.  And within this obsessed tribe there are far more useful people than me – like Martha (although, she does talk about herself in the third person…hmm….) 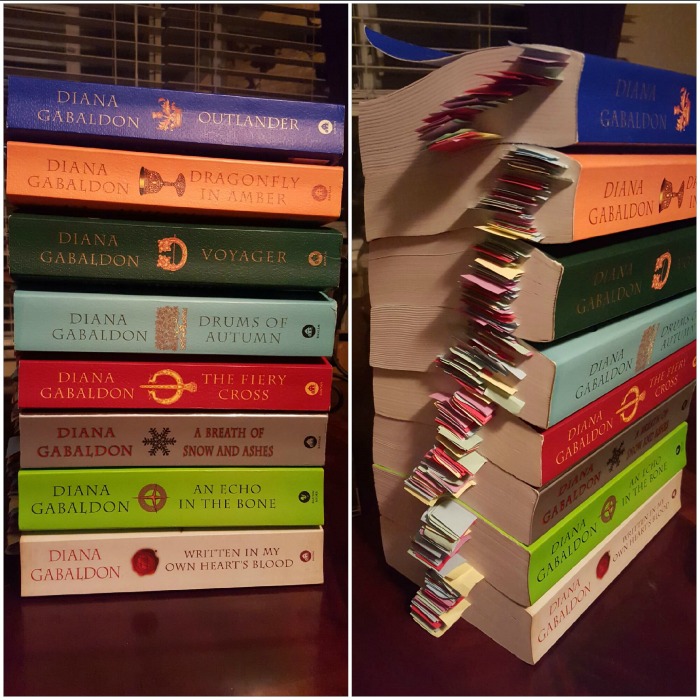 Wait, what? She’s gone through and painstakingly added tabs.  Color-coded even.
COLOR CODES:
Red = Sex or Implied Sex
Purple = Kisses & Compliments
Green = Things that made me LOL or Smile
Blue = Clues & Further Research
Yellow = AWESOMENESS
That’s crazy passionate! What a scatterbrain well organized person!
But to be honest, my very first thought was, I should so be more like Martha.
Even HERSELF thinks we should all be like Martha! 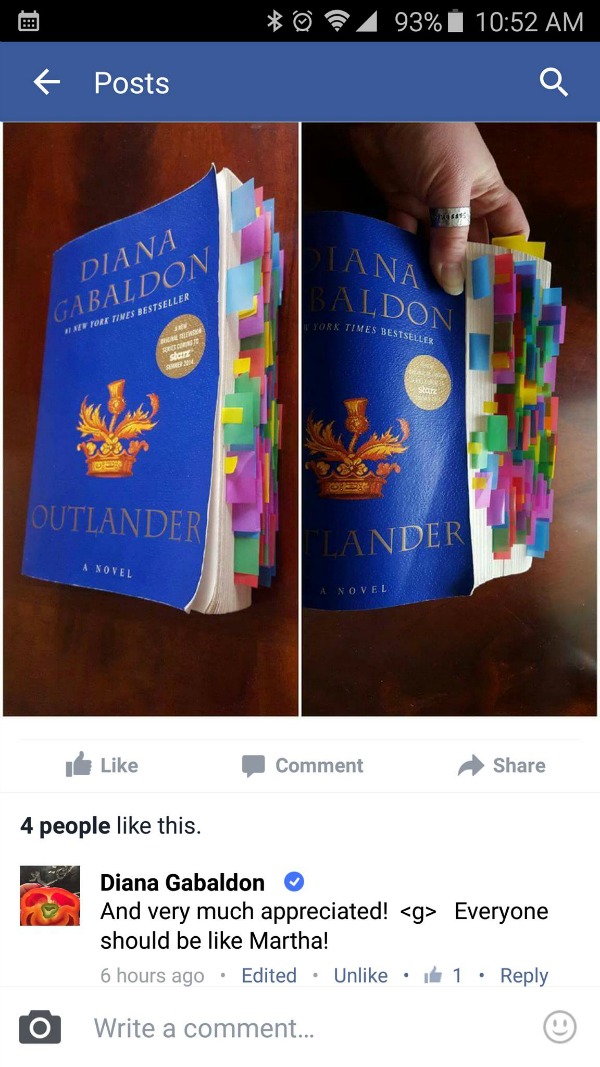 (Insert sigh here)
So this could be the end of my very sad story but alas, like the book series, it does have a faery tale ending (right Diana, it will end well !?).
THE GOOD
Not only do I know a lot about Outlander, the book and television series, I know way more about certain historical issues than I probably would have. And history can be verra interesting.

“History is not the story of heroes entirely. It is often the story of cruelty and injustice and shortsightedness. There are monsters, there is evil, there is betrayal. That’s why people should read Shakespeare and Dickens as well as history ~~ they will find the best, the worst, the height of noble attainment and the depths of depravity.” (David McCullough, US historian)

I know more about social and health issues than I ever have before, like the critical importance of bees. (thanks Caitriona!) Also: refugee shelters and Syria, the dreaded Monsanto; cancer; I’ve already written about THIS guy and the myriad of charitable issues about which he’s made us aware; herbal remedies, the British, and why Scotland would seek independence (thanks Diana); diversity, artistic careers and women’s issues (thanks Terry, the human library).
I am less of a helicopter parent. Otherwise preoccupied with my 117th  viewing of the wedding was a good time to test my child’s ability to dress, clean and bandage their own wound.  And they can make their own snacks, the lazy bums!
I am more of a minimalist.  Being preoccupied means I have less time to shop for stuff I don’t need.  Of course this doesn’t include shopping for whisky, which any fan will affirm is medically necessary, or for my new cowl which as it keeps me warm is also a health benefit. Besides, I really like the idea of replacing “stuff” with “experiences”.  Like a wedding anniversary trip in June.  To where else but Scotland! 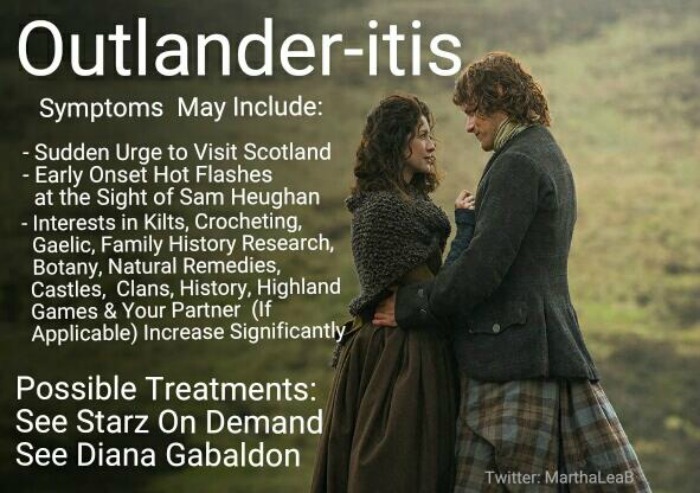 I get really creative when I think about Outlander, especially the drama and human relationships, which fuels my writing pursuits.  For every hour of Outlander, I think I get about 3 hours of creative productivity (but of course that’s when I’m not watching Outlander… see my never-ending circle problem here?).
I have a whole new set of Outlander friends, who turns out, are lovely human beings who have similar interests and values.  And now I’m in the My Peak Challenge Prep Program, a whole new (and amazing) level of peer support (did I say the support was AMAZING?!) to get my lazy butt off the couch (and which seems to be working).
So there it is, laid out for all to see.
The greatest thing though, is that I know I’m not alone. 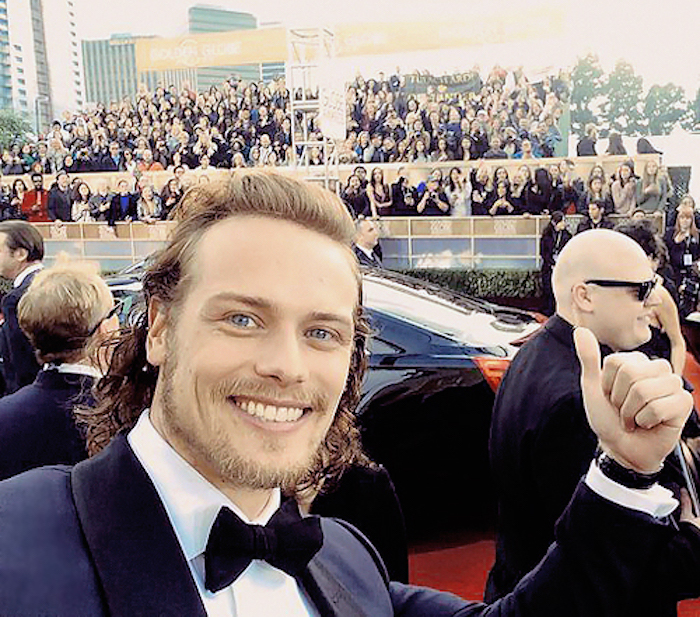 I am an Outlander fan, and I wouldn’t change a thing*.
*(spoiler) except maybe those parts dealing with Roger, poor lad


What are some of the more quirky things you do as a fan?