Last of a Series

2016 NYC Tartan Week, we loved you long time, and now we are tired.  Hundreds of Outlander fans making their way home echoed sentiments of how much fun was had, but hella glad that it is finally over; kind of like how you need a vacation after spending a week in Disney World.

From the premiere to the parade, the Outlander fandom presence at NYC Tartan week was multi state, multinational, and exuberant, and the competition to join in all the events, both Outlander and Tartan Week sponsored, was expectedly strong. I didn’t attend all the event offerings, but here’s my take on what I did that week…

My premiere experience started off the week for me in the highest of spirits, but the reality of fangirling was a rather sobering one for me.  All in all, it was a good opportunity to meet up with my Outlander World friends and get an early view of Episode 201. 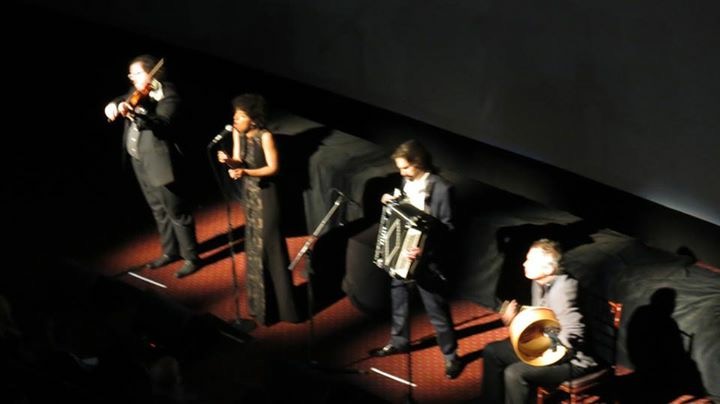 Next up for me that week was the Outlander panel held at the Apple store, where 300+ Outlander fans lined up outside for a few hours and were checked in by Apple staff via some mysterious system, and then waited some more. Those with confirmation emails were guaranteed entry, and while we waited, there was much socializing, low-key line jumping, and NYC snacking on dirty-water dogs and big pretzels. 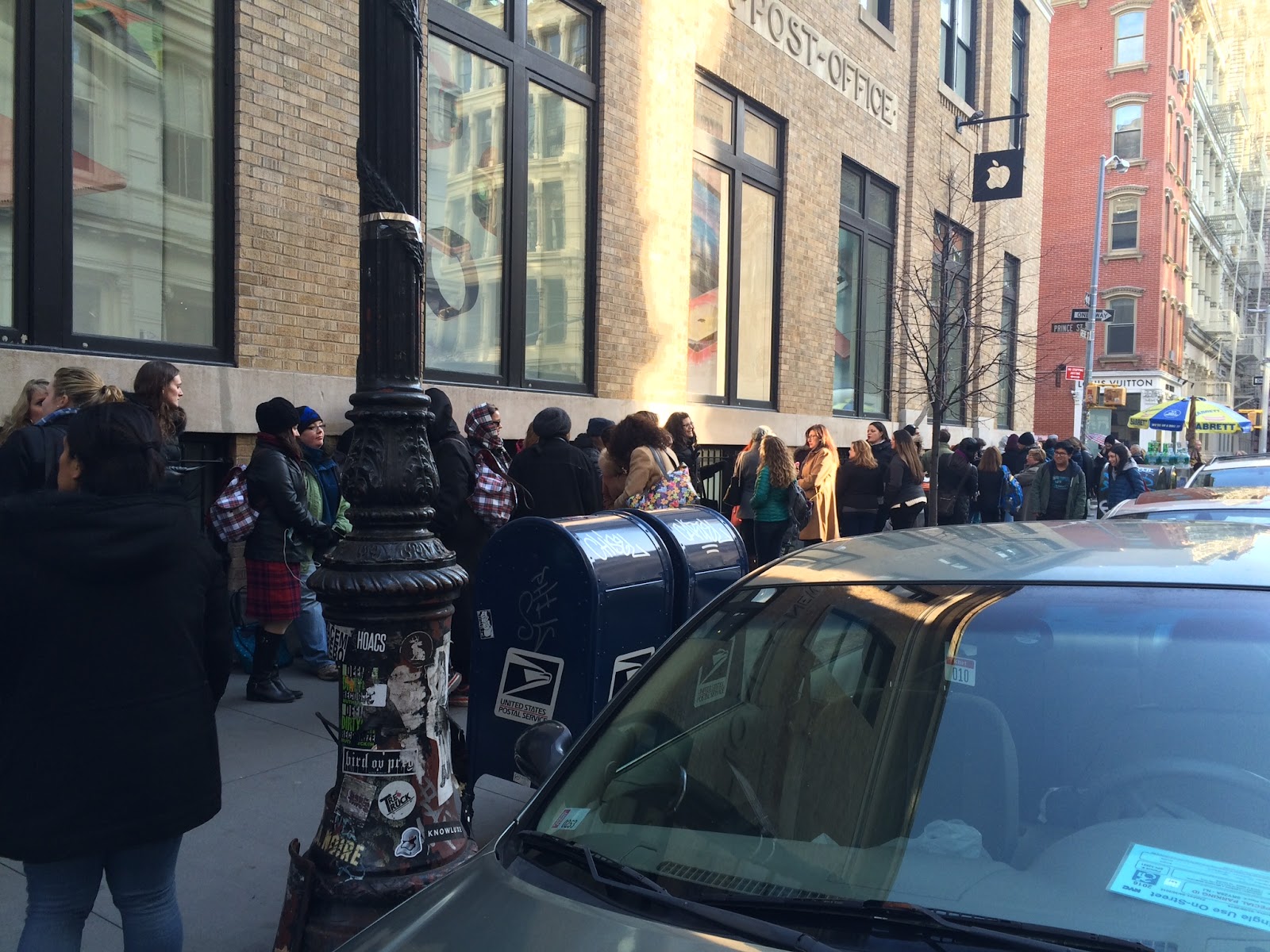 Finally, we were permitted inside and directed up stairs to an open area and packed cheek by jowl into a rather small venue for an up close panel with Caitriona Balfe, Sam Heughan, Tobias Menzies,
and Maril Davis. I didn’t get a seat, but was able to get standing room directly behind the last row.  Unfortunately for me, the young woman in front of me had a freshly done undercut style haircut, and she spent a great deal of time flipping the long ends over her shoulder (and into my face) so everyone could see the undercut shaved part, which looked kind of ouchy and stubbly if you ask me. 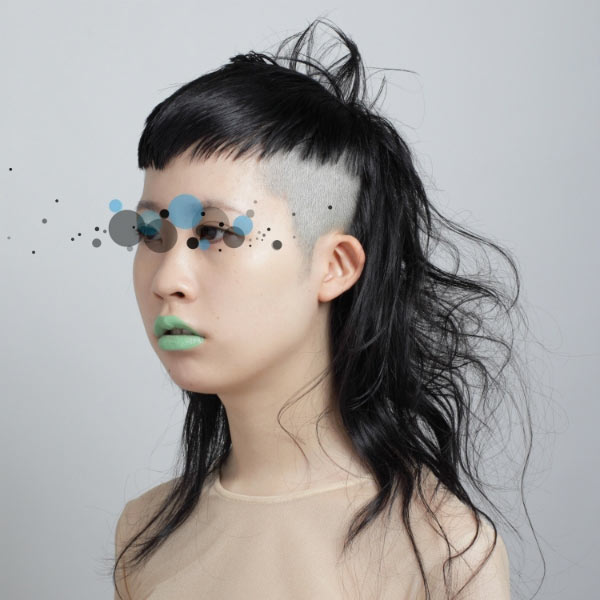 (Not really THAT girl)

The panel is available for viewing on iTunes, which is a good thing because I was too busy snapping pics to recall most of the content. Watching Tobias Menzies fidget restlessly was an interesting task, because, of course, he does that so well; in fact, better than any of the other cast members. 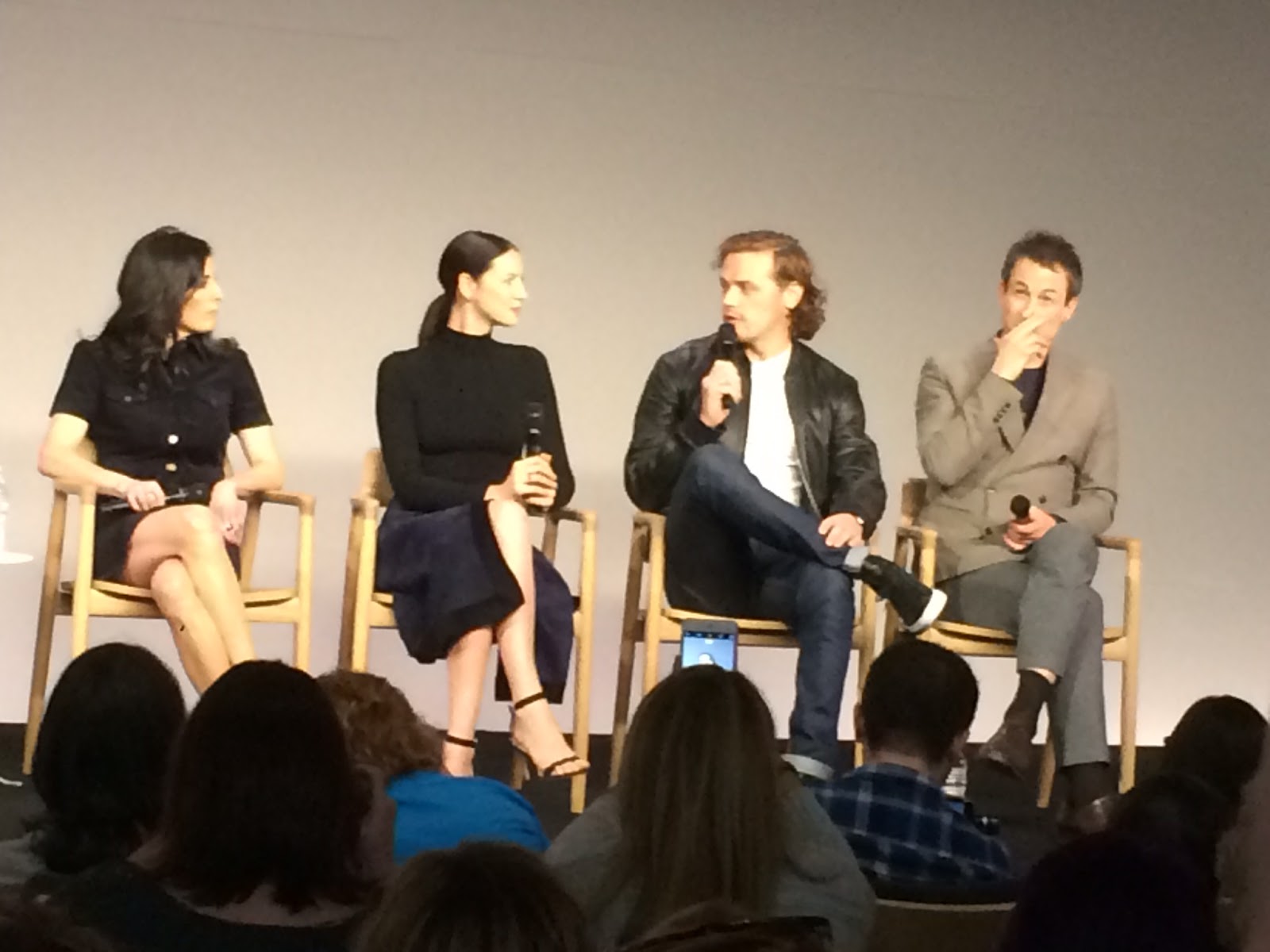 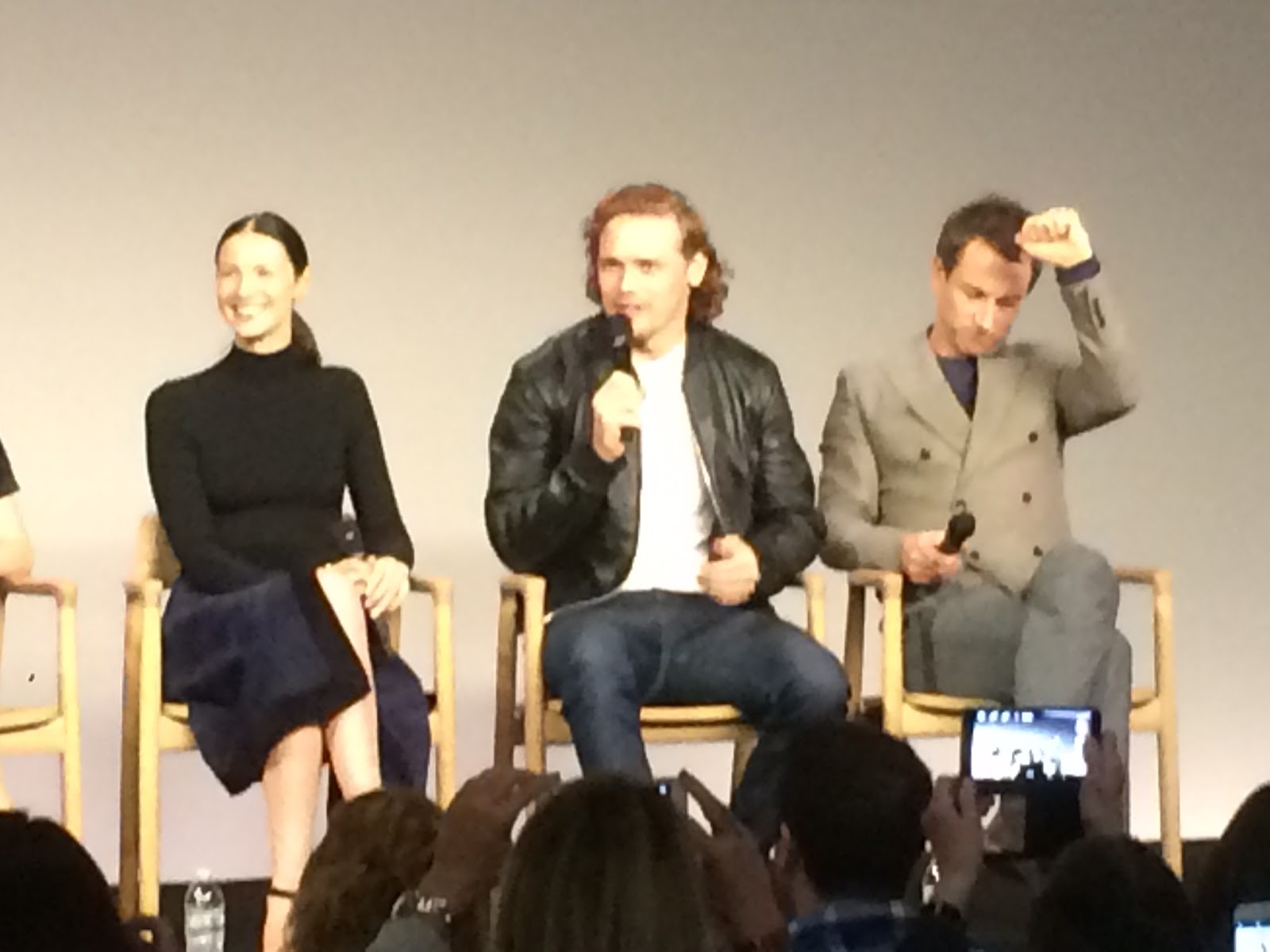 One moment that stands out had to do with the inevitable topic of “shipping” posed to Sam and Cait.  Clearly, this moderator had no clue of just how mature and smartassy her audience was, because when she brought up the worn-out question, Ms Moderator was soundly and loudly shouted down for posing such a feeble and somewhat embarrassing notion. 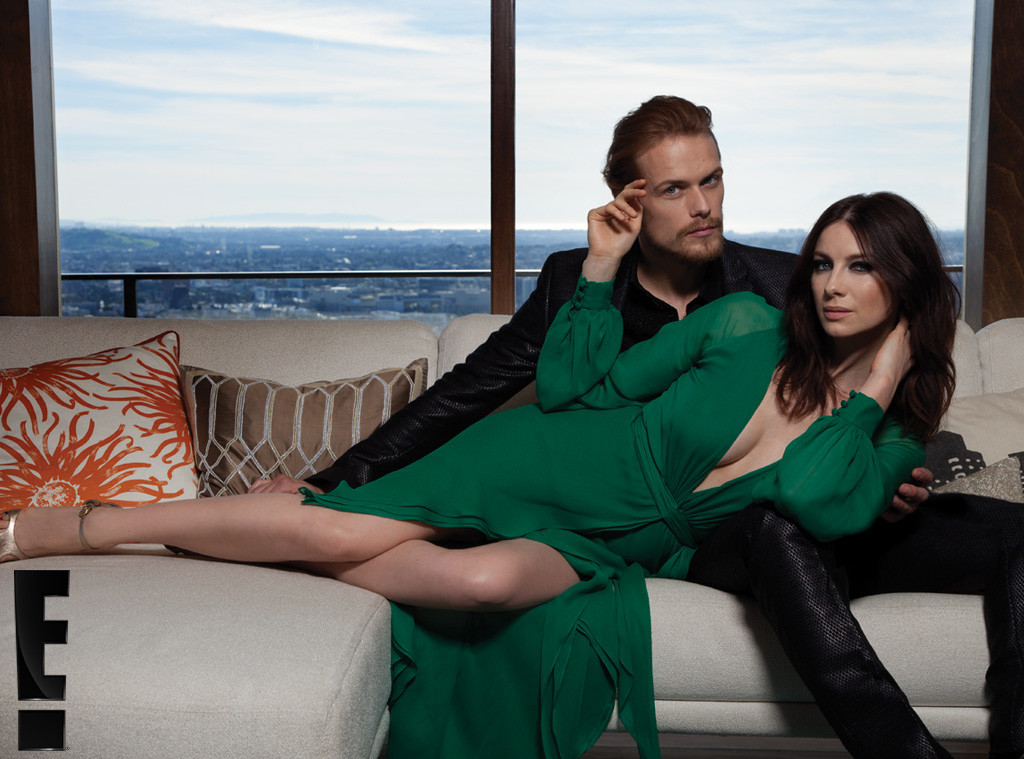 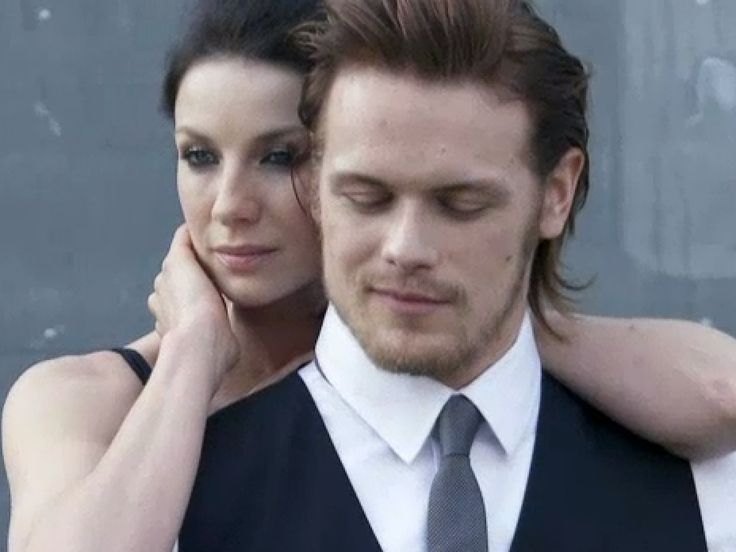 The panel was then opened for audience questions, and one of us smartasses prefaced her question by stating how tired the panel must be of “the same old questions”. So far: Moderator 0; Fans 2.  One nice lady (whom I subsequently met later that week) gave Sam a gift and got a kiss in return for her efforts.  Tres sweet!

Here I had my first exposure to professional autograph hounds, a further confirmation that Outlander has indeed hit the big time.  Who are all these somewhat seedy-looking men holding large photos of the cast, but not waiting in line, yet would not budge from near the barricades surrounding the service entrance which clearly served as the stage door? With the event over, some of us hurried outside and back around the corner to the barricades, which were already clogged with fans with the same idea, plus those TALL autograph man-whores (as I like to  refer to them) standing front and center—they had been waiting there the entire time the panel was in progress. I know; it’s a living.  Still, if I ever find their pimp…..Those faux fans are not in the least bit interested in Outlander, and the REAL fans loudly and derisively let the cast know this when the big photos were presented to them for the Sharpie treatment. Mob scene. 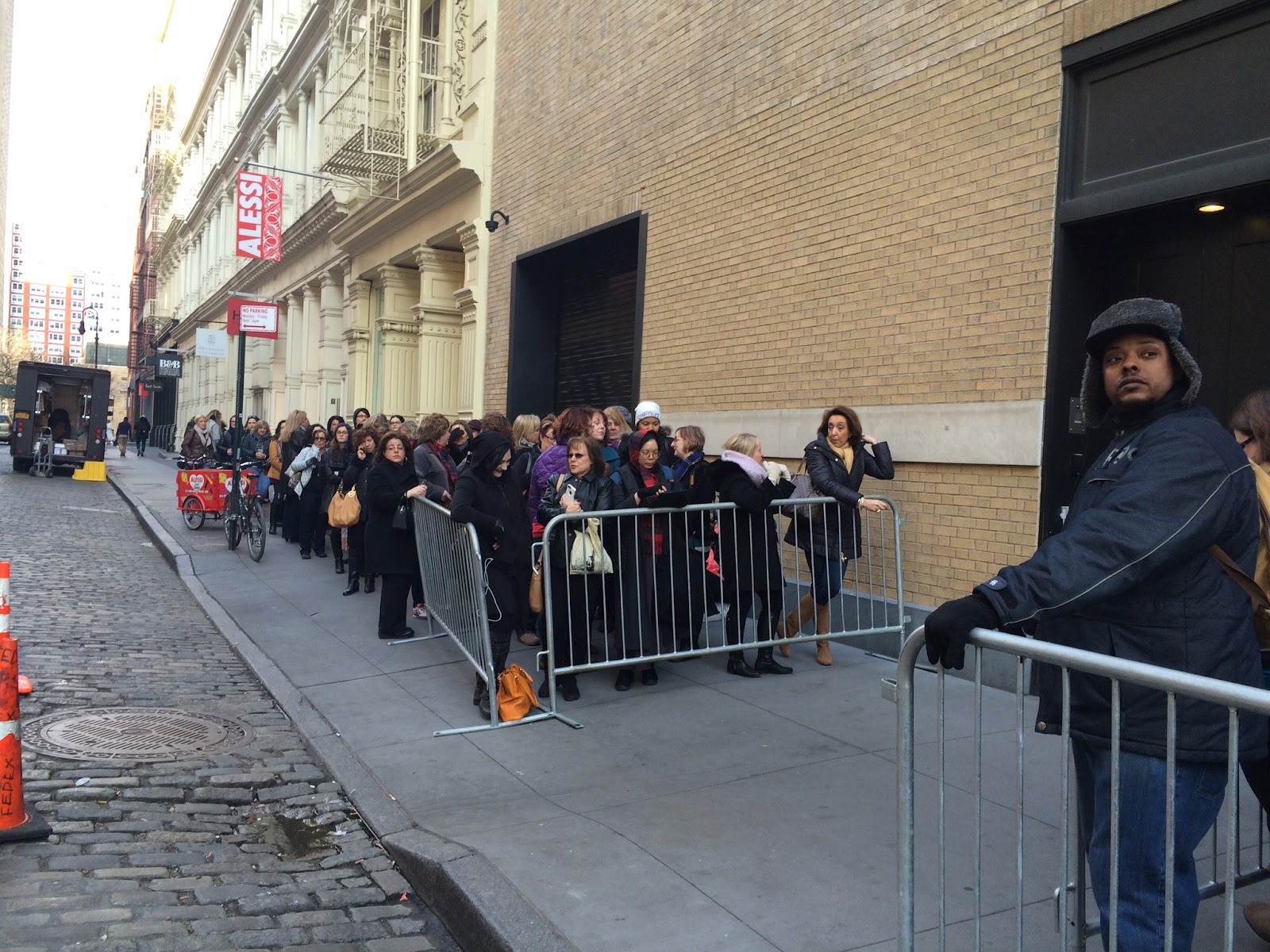 Guy (right): earflaps = dead give-away of a professional
autograph hound.
The Lead Up

Other various events followed throughout the week, including daily concerts in Bryant Park, various pub crawls, official cocktail parties, a big ceilidh on the Friday night before the parade, and a pre-parade brunch.  I skipped all of those since I wasn’t staying in the city and between the premiere and scoring tickets for both the official after-parade party and a special screening of the episode, my  tolerance for all things Outlander dance card was, shall we say, full.

The forecast, unlike last year’s bright and sunny Tartan Day Parade, called for lots of rain.  After an easy commute and parking, we trudged over to the Westin Grand Central for the registered parade marchers among us to sign in and gather our lanyards and Outlander swag, including neat Outlander tee-shirt, compliments of Starz. 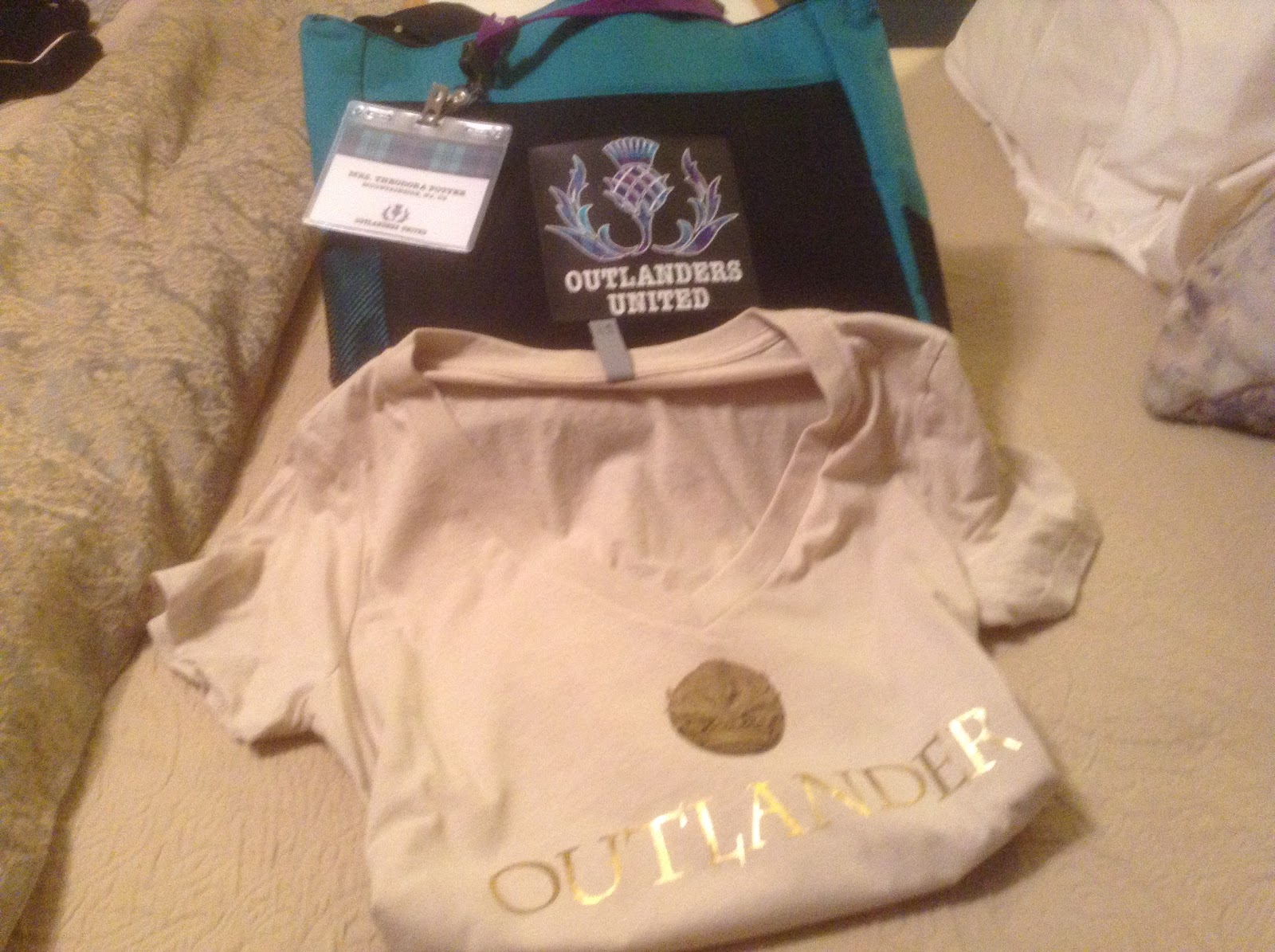 I, and two others were interviewed in the hotel lobby by a film crew from Glasgow shooting footage for a supposed BBC program on the Outlander phenomenon. One of the others lovely fans pulled up her sleeve on camera to show the autograph she had received on her forearm earlier that week from Sam Heughan, over which was now immortalized as a freshly inked tattoo of  autograph perpetuity.   That made for good film.

Us fan women require regular sustenance, so a hearty breakfast helped pave the way for the 25,000 steps I was to clock that day.  We hit Bryant Park and claimed an umbrella under which to take cover, because the rain had started, but the pipers stoically played on.

I Love A Parade

Marching in a parade means that you essentially miss the actual parade. So, I did not see the Grand Marshall, Sam Heughan, except from a considerable distance, but, hey; that’s what social media is for, and there are some truly fabulous pics of him trotting, dancing, and generally raising happy hell for the entire parade route up Sixth Avenue. He was adorable, sopping wet. We were all drenched and dripping, but still deliriously happy.  I was, anyway. 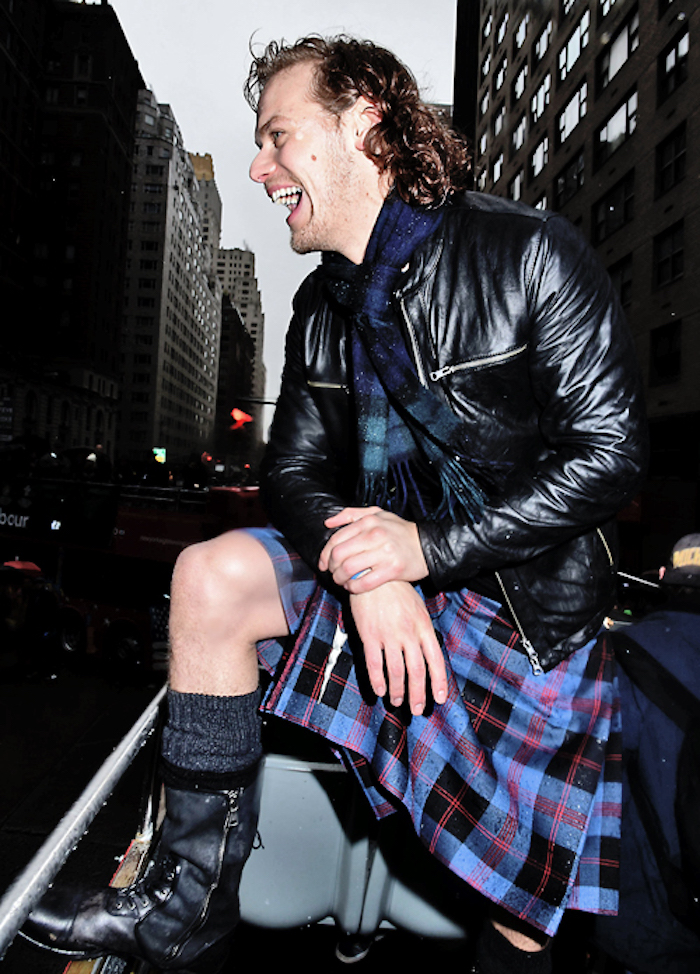 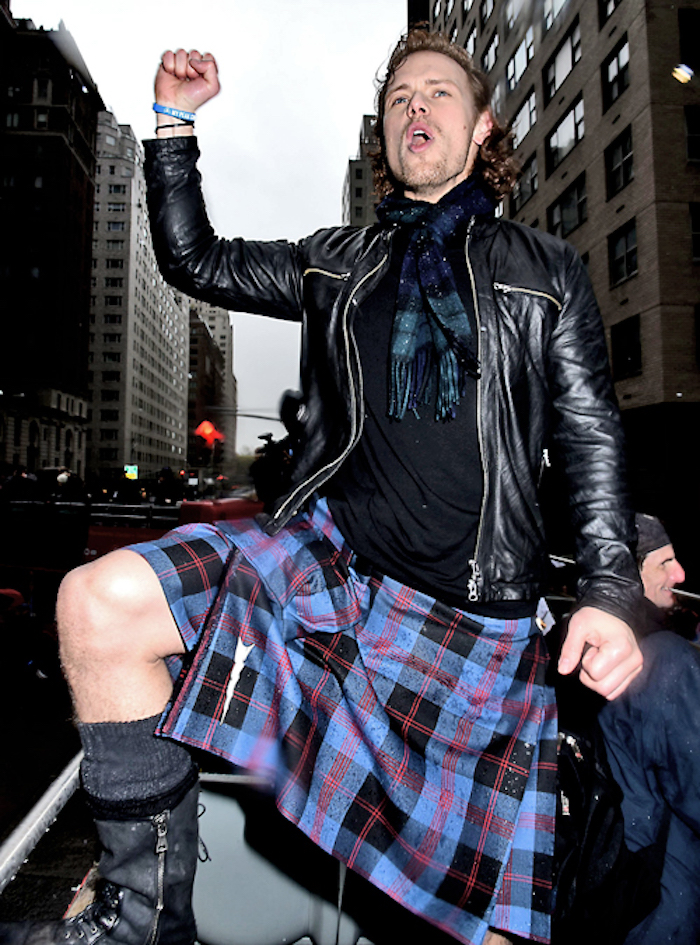 Our Outlanders United marching group was comprised of 300 marchers, separated into two groups. Marching in between the two groups was the 78th Frasers Highland Regiment from Quebec.  So, when Sam Heughan generously descended from the double decker bus to greet the first group of Outlanders United, the second contingent (to which I was relegated) only got a glimpse of him from a block away, as he disappeared soon after. No complaints here, but I wonder if he even knew there was a second group of us.  Maybe a Popemobile next time?  Fat chance that the parade committee will again permit the breathing of the word OUTLANDER, since we seemed to take over, um, everything be we Scots or not. 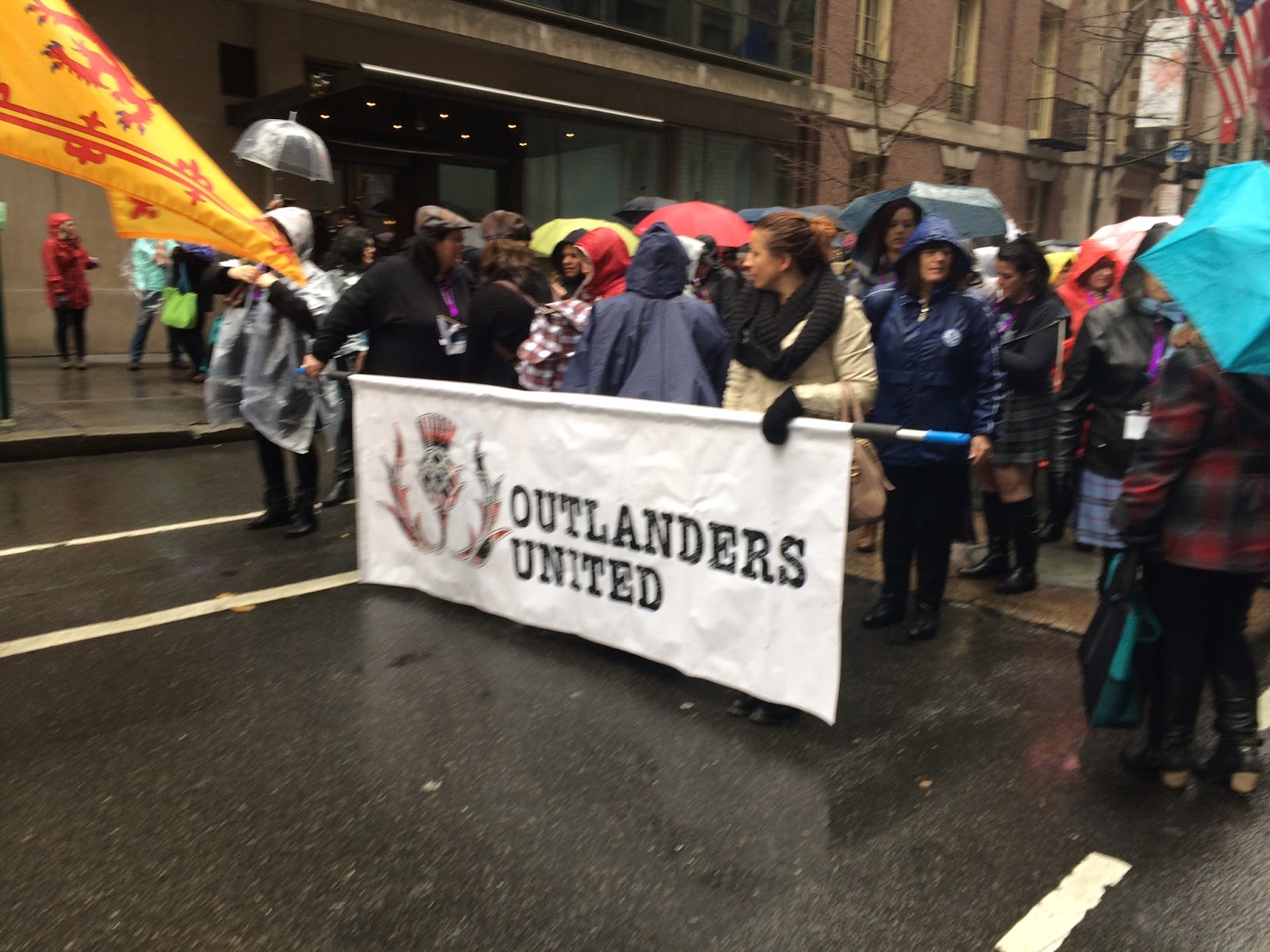 The group congregated at the end of the parade for another group shot near the now shuttered Ziegfeld theatre, site of last year’s mid-season premiere. I am extra sad because I saw “A Clockwork Orange” there when it was first released (2X sad for me, since that was in 1972), and that theatre had the coolest bathrooms. 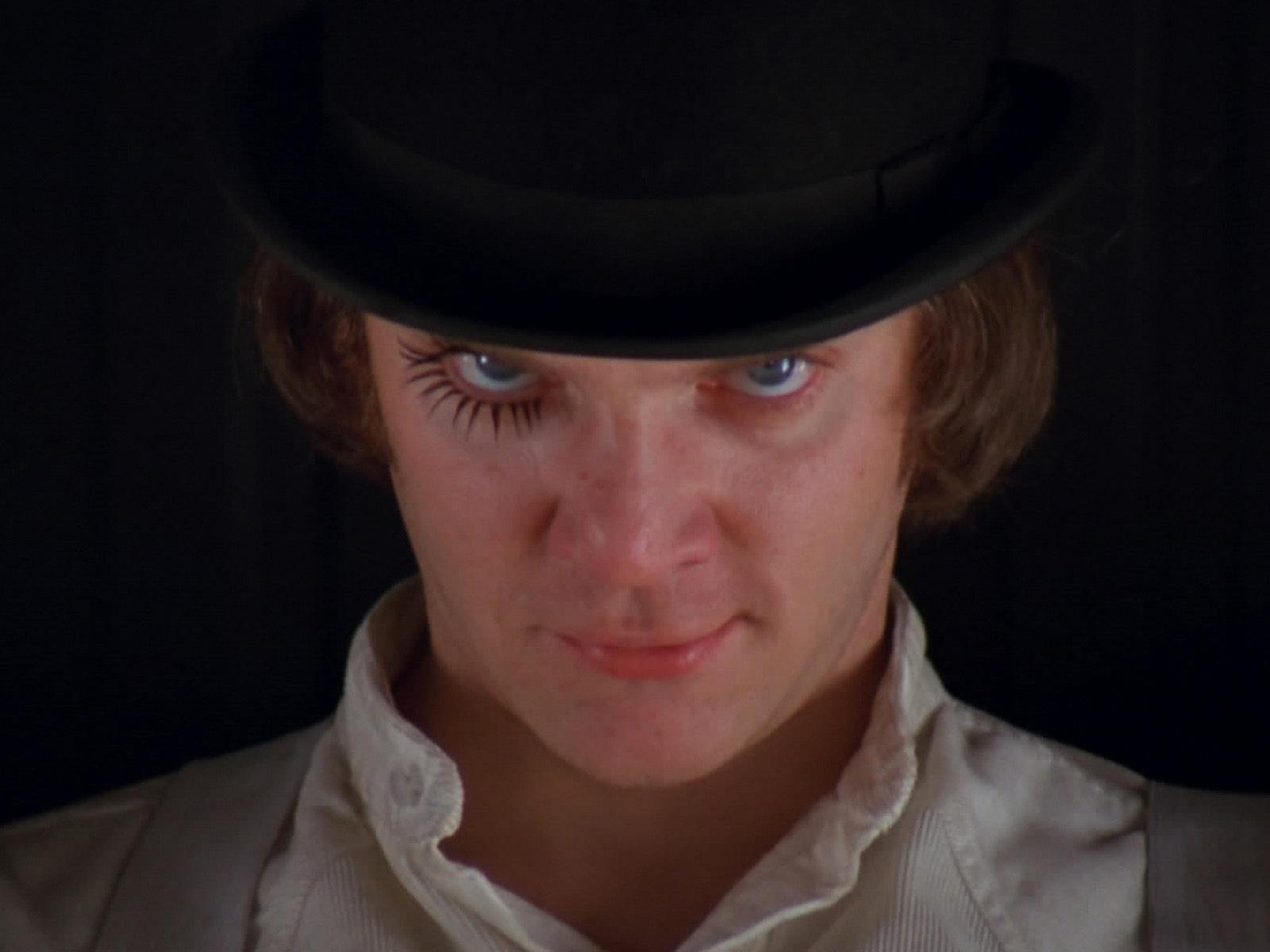 My friend and I headed over to the official after-parade party at a restaurant a bit further uptown.  Here is where I snuck into the ladies, removed my kilt purchased for the occasion, and replaced it with the black mini that was rolled up in my bag. Look; a Greek girl who last wore a kilt in the fourth grade on assembly day can only take so much.  After snagging a table and a couple of bar stools downstairs, we discovered  the peaty but delicious joy that is a Laphroiag cocktail. 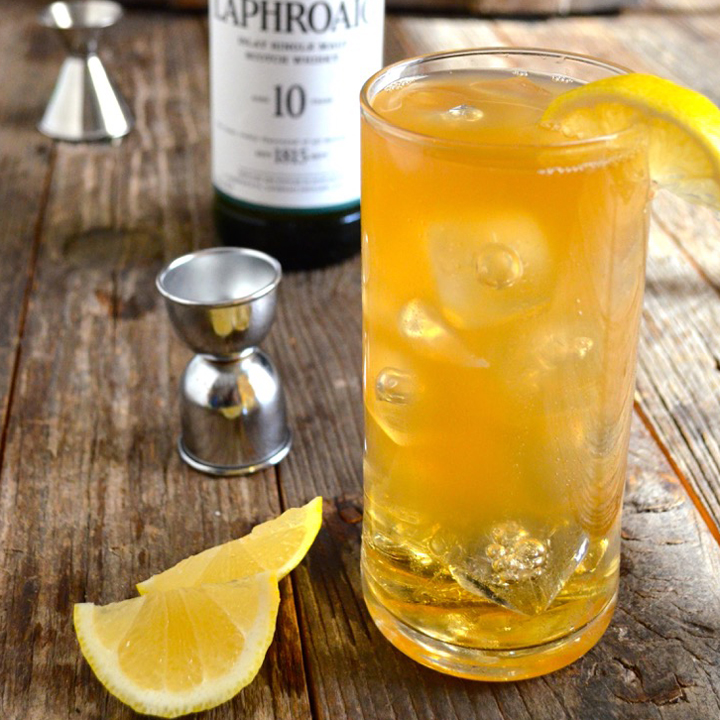 The best part of this event was meeting Outlander friends from everywhere, and finding out that the simple utterance of “The Donger need food” will make you someone’s best friend forever. 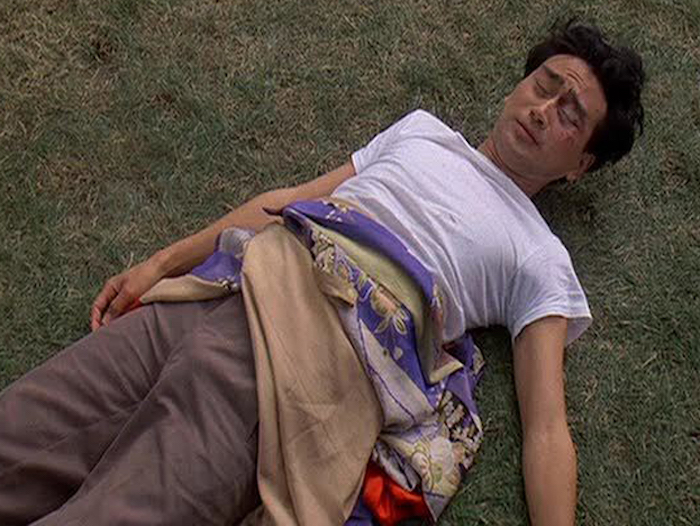 Party number 2 organized by Outlanders Forever facebook group occupied much of the top floor of the sacred hangout for NYC Outlander fans, St Andrews Scottish Pub.  Not only had I met Diana Gabaldon there for a smallish dinner group some time ago, but it was right around the corner from a tiny luncheonette first owned by my grandfather, and then well into the 1970’s by my father . The building where it stood has since been razed, but I have fond childhood memories of when Times Square was really, really seedy, and how you should not touch anything EVER in a public bathroom. 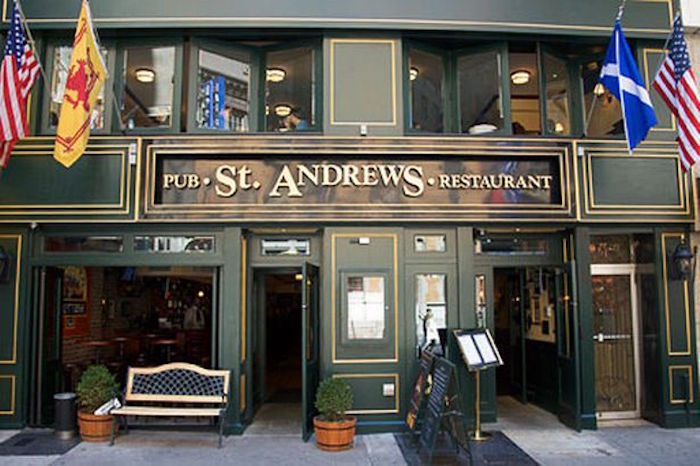 This group again makes event-planning an art by engaging the Director’s Guild Theatre for a private screening of Episode 201 as it was airing on Starz.  First, we got some live entertainment, performed by pipers Elias Alexander and Andrew Forbes as well as more dancing by the lovely Kayleigh Boardman.  We devoured the season 2 opener of Outlander as if it were shiny and new, despite having watched it 3-plus times on the Starz app that week already. 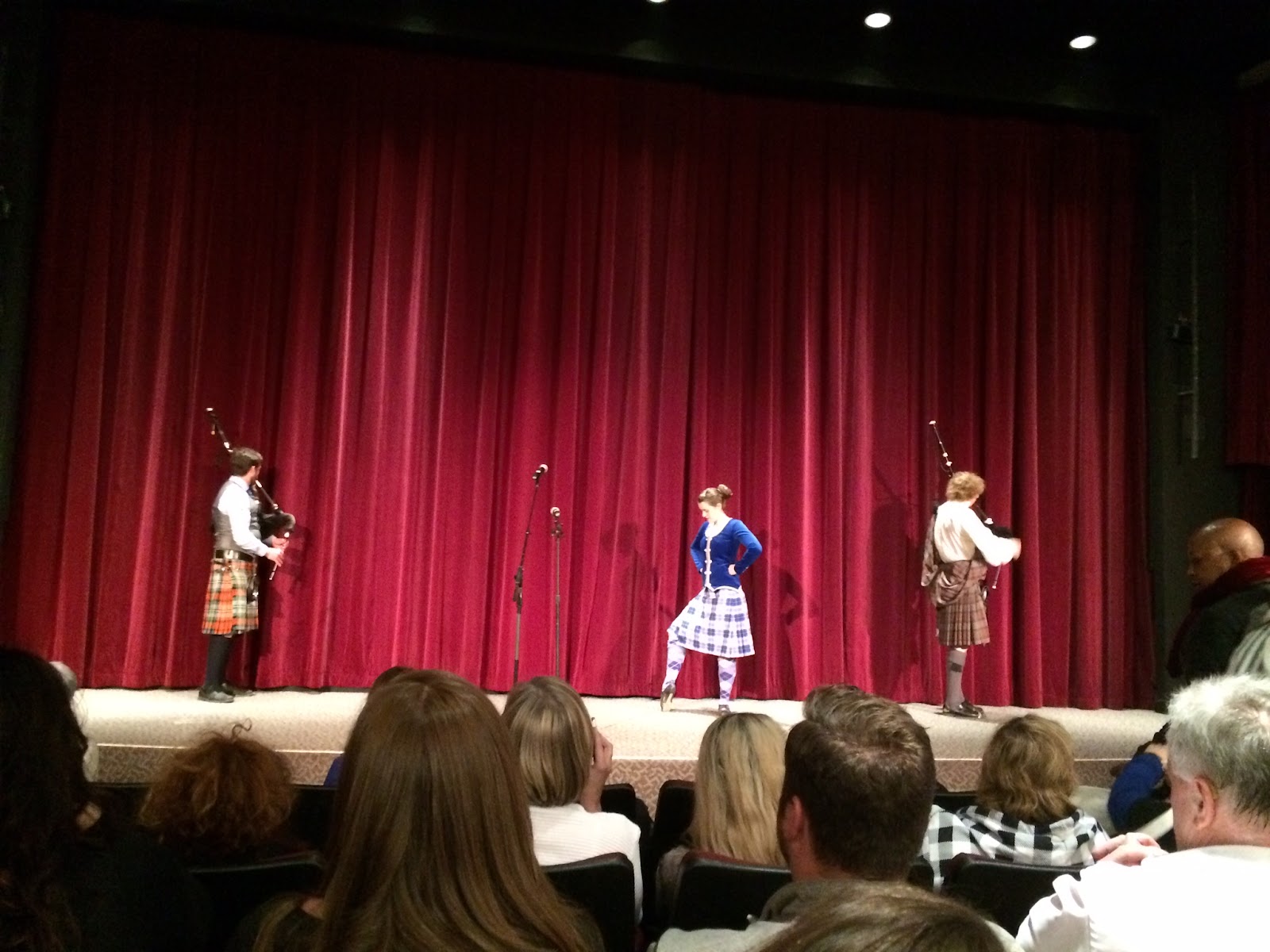 I’ve crossed the Hudson River numerous times during Tartan Week, but never have I been so happy to accrue my final toll on EZ Pass and go home.  The wonderment of it being OVER settled over me like Jamie’s plaid on a rainy slog on horseback through the Highlands. I had nowhere to go the next day, no line-up in which to congregate, and no cares about tickets, wet iPhones and that I wasn’t really Scottish.  Give me a year to recover and I’ll  do it again, if only to meet up with Outlander fans from all over one more time.

Were you at the parade or did you attend any Outlander events?  We’d love to hear your stories!  Share them in the comments below!