Alex Randall is a really good guy, despite the fact that his brother is the sick, perverted Black Jack Randall who abused and tortured Jamie at Wentworth Prison. Alex also happens to be in love with Mary Hawkins, which sets all manner of alarm bells ringing for Claire.

Alex and Mary first met at Versailles, and they’ve been exchanging letters in secret ever since. They’re in love and they plan to be married. Never mind the fact that Alex no longer has a job, his health is failing, and his bride-to-be is no longer a maiden. Love conquers all, right? 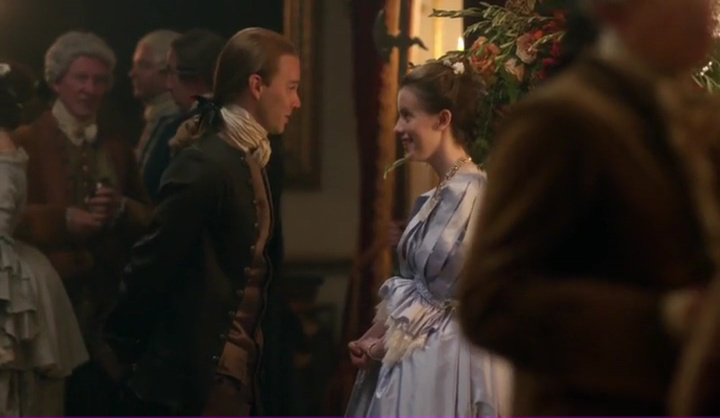 After Mary’s attack, she is spirited up a back stairway to avoid detection by Claire and Jamie’s dinner guests (among them Mary’s uncle and fiancé). Alex is more than happy to watch over Mary as she sleeps, professes his love for her, and promises to take care of her. Claire warns Alex that the poppy syrup she gave Mary may cause her to have visions, and that’s exactly what happens. Mary awakens, mistakes Alex for her attacker, and alerts the entire dinner party of her presence. It doesn’t look good for Alex when Jamie pulls him off Mary, and by the time it’s all over, he, Jamie and Murtagh are hauled off to the Bastille.
Back to Claire and those alarm bells. She remembers a Bible that belonged to Frank’s aunt and the family tree that was documented inside the front cover. It lists Frank’s ancestors as Jonathan Randall and Mary Hawkins. Jonathan, not Alex. When Claire visits Mary Hawkins to see how she’s recovering from the attack, Mary informs Claire of her and Alex’s plans to marry. Sorry, can’t happen. If Jonathan and Mary do not wed and conceive Frank’s ancestor, Frank will not exist. Alex and Mary must be stopped, but how? 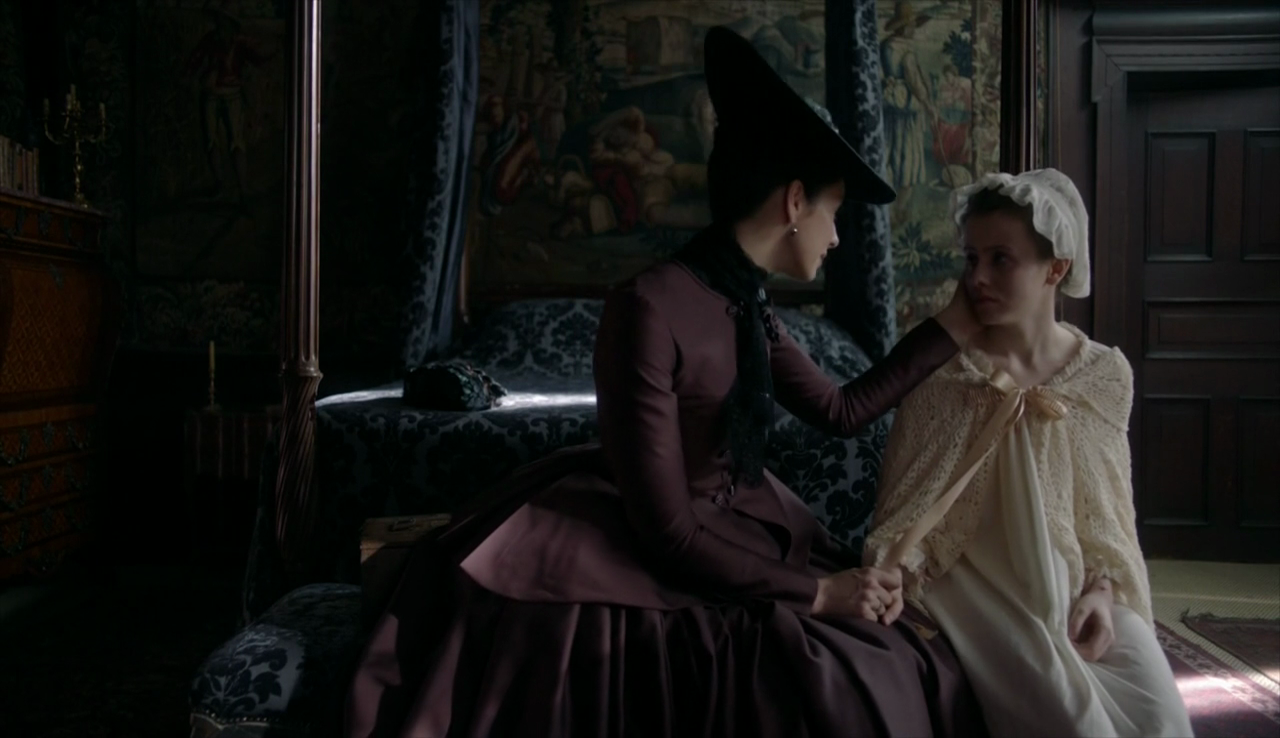 Mary writes a letter detailing the attack and confirming Alex’s innocence surrounding the events at the dinner party. She asks Claire to deliver it to the Bastille for her, hoping it will result in Alex’s release. Claire agrees, but stands poised in front of the fireplace with the letter in her hand. It would be so easy to cast the letter into the flames and let Alex rot in prison. He’d be out of the way, and a clear path for Jonathan and Mary would be ensured. Why doesn’t Claire burn the letter? It would certainly delay Alex’s release, but for how long? Days? Months? Is it the uncertainty of his sentence that stops her? It wouldn’t be too difficult to find out. Claire knows Alex is unwell – if he died in prison, then problem solved. But it’s an uncertain calculation:  time in jail x poor health = dead and out of the way. It sounds good, but it’s not air tight. Claire needs a dependable outcome, something more solid.
Claire delivers the letter, and the grateful Alex is released. But there’s a price to pay, and it comes at a heartbreaking cost to Alex and Mary. Claire settles on the bench with Alex and puts on her compassionate mask. She observes out loud that Alex is unwell and not getting better with time. Then she asks him if he wants Mary robbed of her youth playing nurse to him, does he want her leading a hand-to-mouth existence, and what kind of life can he offer her now that the Duke of Sandringham has dismissed him from his employ? It’s not the life Mary is envisioning for herself, she says. She urges him to set aside his feelings and let Mary go. She assures him that, in time, Mary will be able to move on without him.
Claire laments that it breaks her heart to break his, but evidently not enough to keep her from doing it. For Frank’s sake, Alex and Mary simply cannot be. Why is Claire so concerned with Frank and his existence? Perhaps she doesn’t love Frank as much as she thought she did (or as much as he loved her) and is trying to ease her conscience. Perhaps she still loves Frank and feels guilty about not returning to him and their 1940s life. She had the chance, but chose to stay with Jamie. If she saves Frank’s life will it justify (in her mind) her decision to remain with Jamie? She’s destroying the happiness of two people in order to save Frank (who is probably heartbroken and tormented by losing Claire). Is the outcome of her masked compassion something she’ll come to regret?

Are Claire’s actions forgivable? Let us know in the comments below!