Jared’s home in Paris is fully staffed with capable and loyal (so we’re told) servants. We see them in every part of the house, attending to Claire, Jamie, and Murtagh’s every need. When they are not attending to their respective charges, they stand at quiet attention, within earshot of private, potentially dangerous conversations. They appear proper and professional. But can they be trusted?

When Jamie returns from yet another all night stay at the brothel, his servant follows him up the stairs as he converses with Claire about his agenda for the day – where he’ll go, who he’ll meet, and the reasons why. The servant can hear every word of the plan of action. I wanted to put my finger to my lips, pull Claire and Jamie inside, and shut the door behind them. Claire even shifts the servant aside as she buttons up Jamie’s vest, continuing the conversation as the servant remains in the room.

I wanted someone to close the doors when conversations were taking place about the Jacobite rebellion, Jamie’s deciphering of letters, and the disagreement between Claire and Jamie after her day of volunteering at L’Hopital des Anges. Jamie states the reason they’re in France is to stop the rebellion, and the argument proceeds from there. Before Claire arrived home, Jamie was writing, and then crumpling papers. What was on them? When the servants come in to tidy the room, surely they will look to see what was written on the discarded documents. Were they correspondence related to the wine business or something else? When Claire arrived and the argument ensued, I kept looking in the open doorway — the servants were there, seemingly disinterested in what was going on inside, but there’s no way they couldn’t be hearing the conversations taking place. 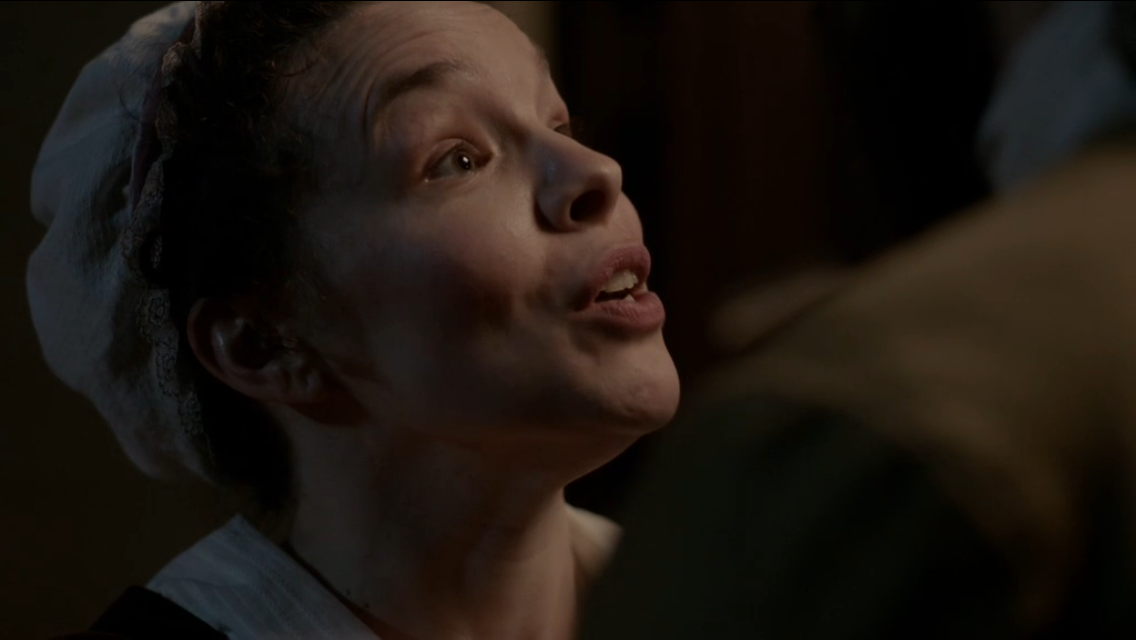 Suzette is Claire’s lady’s maid. One of the duties of her position is to ensure the privacy of her mistress. She knows what goes on (or not) in Claire’s bed. We don’t actually hear a conversation between Claire and Jamie informing us that he’s sleeping elsewhere, but Suzette knows. She’s privy to that information by the very nature of her position. However, being loyal to her mistress should include a measure of discretion, which she betrays. She’s having intimate relations with Murtagh (we catch a glimpse of that rare smile), but she betrays her loyalty to her mistress when she tells him of the current sleeping arrangement (“love leaves the bed”). It’s not a dangerous tidbit, but it sheds a bit of light on the probable information-sharing that goes on between the servants in this great house.
When Claire visits Master Raymond at the apothecary, he indicates that it’s usually the servant who picks up the “birth control” for the mistress (upholding her image of fidelity), not the other way around. Suzette would be trusted with private, potentially damming information, had it been that Claire was in need of such medicinal assistance. However, the tables are turned and I have the feeling that if Suzette was visiting Master Raymond’s shop, she would not have been as discreet as Claire (who referred to her as her lady’s maid, and not by name).
Jamie and Murtagh freely discuss the letters they’re deciphering. Murtagh indicates how many times the seal has been broken, Jamie summarizes the contents of some correspondence, and Murtagh questions the reason behind the letter composed as music. All with doors wide open and within earshot of loyal servants. One even tends to a chandelier as they discuss their work. I want to warn them. “Shhh.” Why do they feel so safe discussing such dangerous matters out loud, in front of the servants? Isn’t it possible that the information can travel from one great house to another? Even as far as the palace itself? 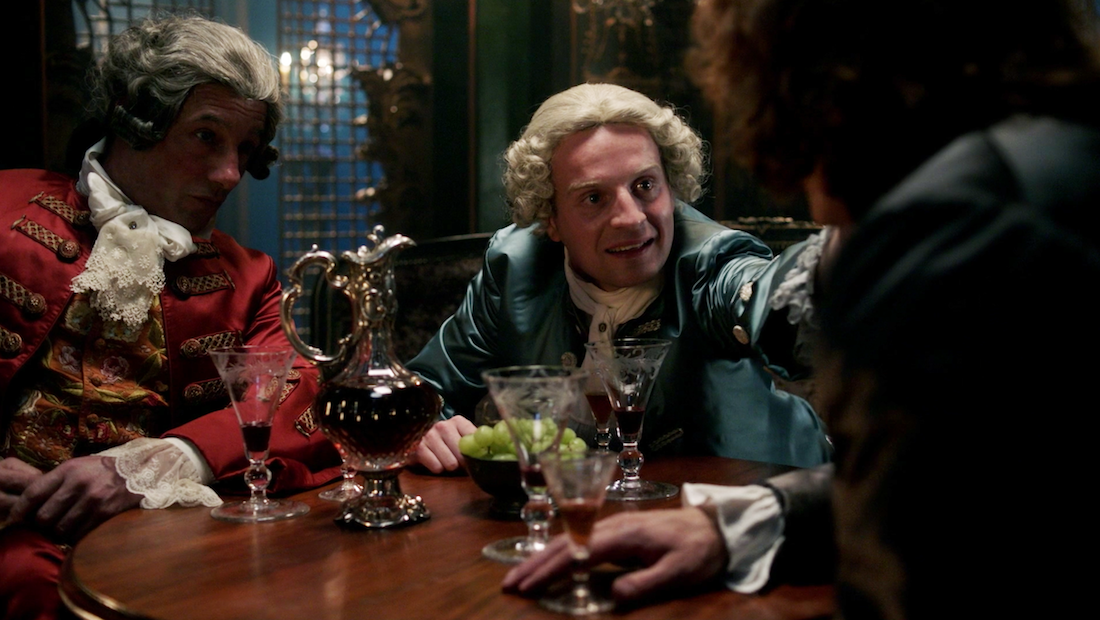 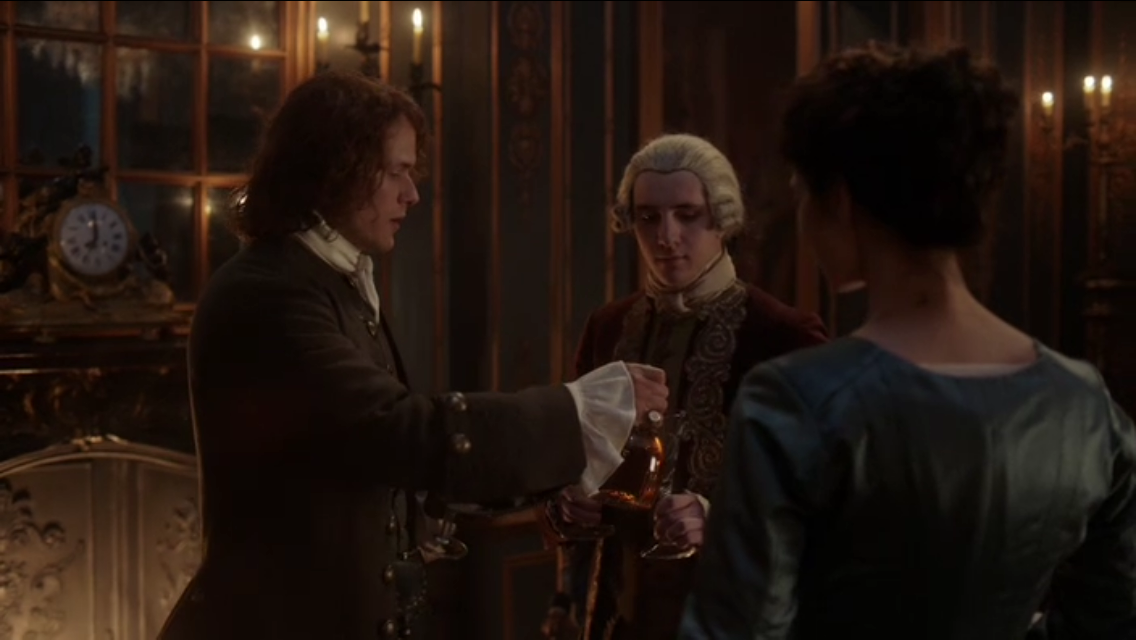 Back at Jared’s residence, Jamie deciphers the key to the musical letter. Claire reads it out loud and they both announce that the “S” at the end must refer to the Duke of Sandringham. It appears to be a cause for celebration as Jamie leaves to find some whisky. When he returns, a servant accompanies him as he pours and continues the conversation. No one seems to be concerned about so many listening and potentially dangerous ears. I am.

Are you concerned about the number of eyes and ears in Chez Fraser?  How do you feel about Suzette’s betrayal of Claire?