My mind jolted at Jamie’s reaction when Claire told him BJR was still alive. “That can’t be right,” I said. I was waiting for some sort of flashback (if not a Wentworth Prison scene, then some expression on Jamie’s face) of the physical and emotional abuse he suffered, and up to this point, is still trying to recover from. Instead, he’s happy, grateful, and wishes Claire would have told him sooner. The reaction was not at all what I expected, and it isn’t until later in the episode that Jamie provides Claire with an explanation of where his mind has been. His recovery seems too immediate – all of that torment gone with the knowledge that BJR lives. I know he’s still carrying some baggage, and I would have liked to have seen some of it right then and there. An expression, or that tormented look in his eyes, letting us know he is still affected by what BJR did to him.
Ironically, the explanation comes just as the pair are about to have sex. Claire notices the bite marks on Jamie’s thighs and demands an explanation. Jamie stumbles through it, getting it all wrong as he tells her the truth. I would have liked to have what happened next follow the book – the fact that Jamie was trying not to appear “unmanly” in the presence of his companions, and the discussion that followed between Claire and Jamie regarding adultery from each of their perspectives. In the book, this is where the reconnecting between them happens, and I would have voted for the scene that followed to appear in the episode. 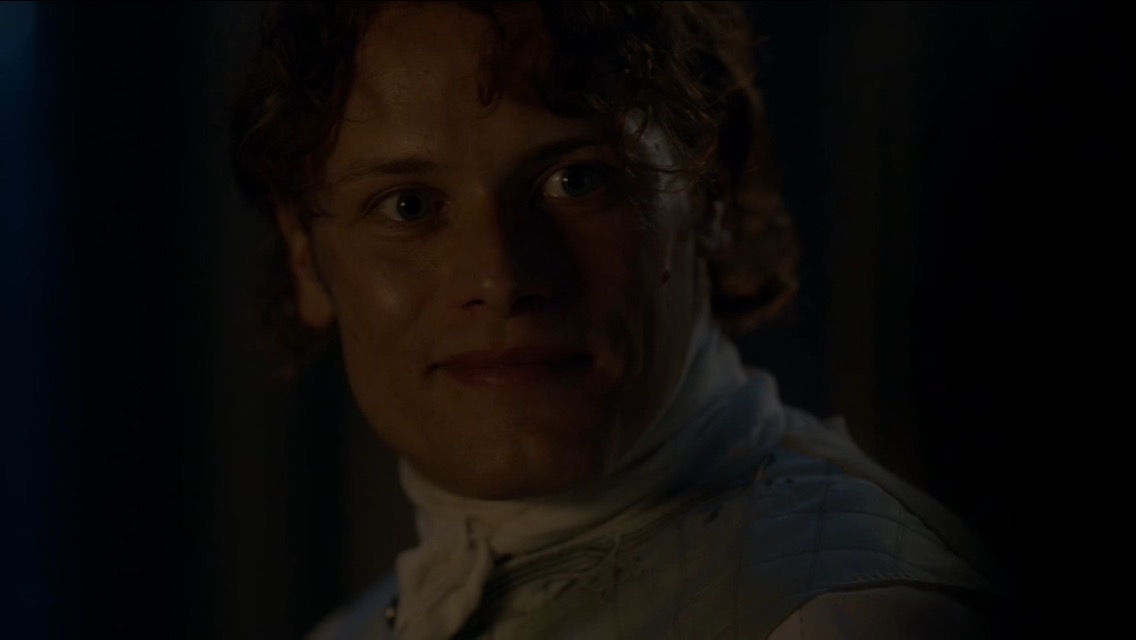 In the book, Jamie explains his torment (as he bathes). “I want to hold you like a kitten in my shirt, mo duinne, and still I want to spread your thighs and plow ye like a rutting bull.” We learn about Jamie’s duality in his expression of his love for Claire. I loved the resolution in the book, which is immediate, but was forced to wait and watch, hoping it would eventually happen on screen.
I embraced the explanation Jamie provided on-screen. (It could easily have been incorporated into the bathing scene on-screen, but I won’t keep harping on that.) He talks about a place a person keeps to themselves, the farthest, most private part of you – perhaps where your soul lives. A place for you, yourself, and no one else. A fortress of sorts. He explains that BJR blew apart that fortress, and from that time forward, he has been without shelter, naked, trying to hide under a blade of grass. Jamie is so vulnerable and open to Claire, and for the first time, she hears from Jamie what he’s been wrestling with, trying to find his way back to her. It made me mindful of my own fortress and I wondered if other viewers were doing the same. 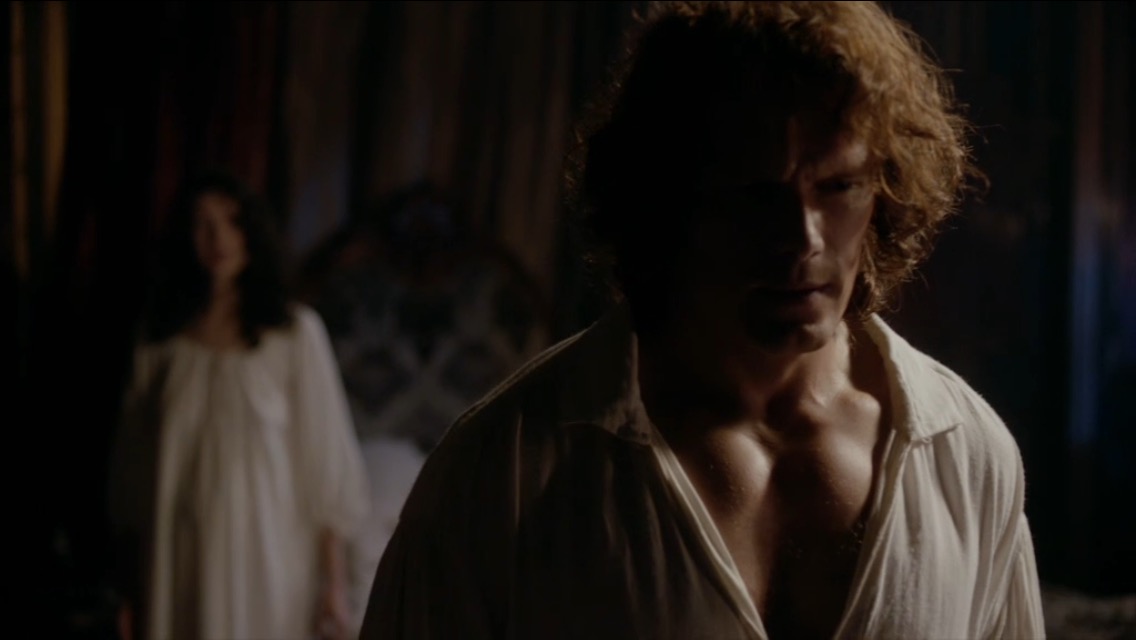 I didn’t want Jamie to leave! “Stay and see it through!” I pleaded with him from my spot on the couch. I didn’t want them to give up when they were so close! They’d just had a major breakthrough in overcoming the trauma BJR had inflicted upon both of them, and my heart sank when Jamie decided to sleep somewhere else. Was it the daybed? I couldn’t tell. Perhaps it wasn’t the location that was as important as what was going to take place. But I wanted to know, and my eyes spent too much time trying to figure it out.
The book (sorry, here I go again) gives us wonderful insight into the fact that Claire has the same rough/gentle thoughts regarding her love for Jamie. The viewer missed that on-screen. “I can drive you to the edge of collapse and sometimes I delight in it, Jamie, I do!” And then she says, “I want to hold your head against my breast and cradle you like a child and comfort you to sleep.” 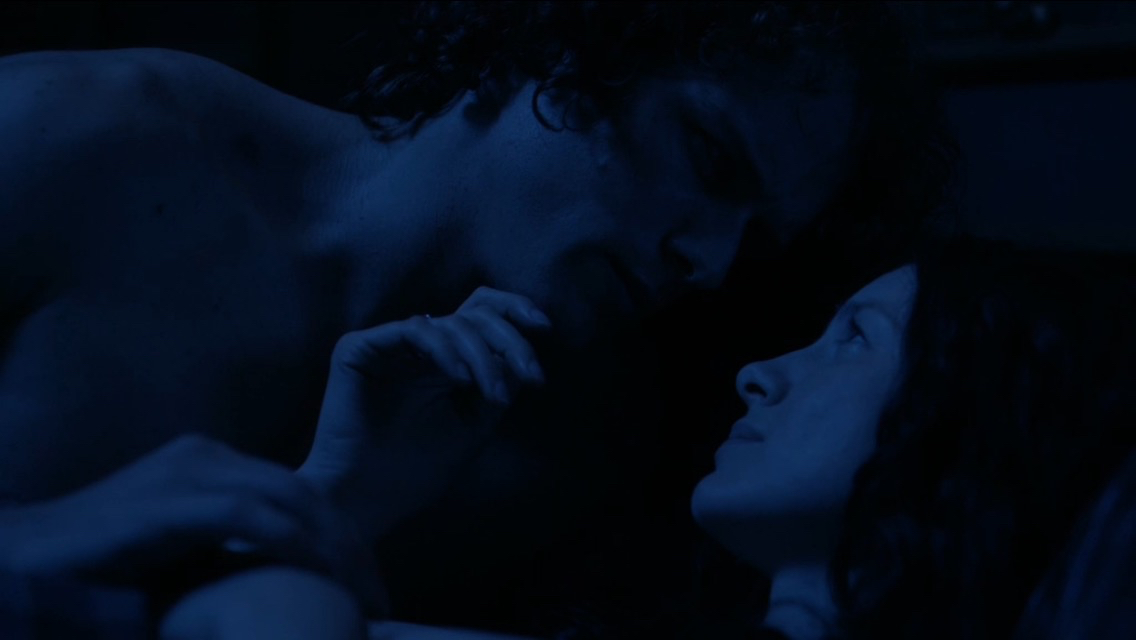 This is a big part of what makes them soul mates – what she and Jamie have that she and Frank never had, and never will. That passion, that multi-dimensional intensity is what makes their relationship so bonding and unique. Jamie wondered about it in Season One, shortly after their marriage. “What I mean to ask is, is this … usual? What it is between us, when I touch you, when you… lie with me? Is it always so between a man and a woman?” Claire finally acknowledges that what they have is something rare. “No, it isn’t – usual. I have no idea why, but no. This is … different.”

I wanted to see that passion re-ignited, the healing process complete. I’m happy it finally happened, but it was too quick, too calm, and too quiet for the strong, passionate people I know Jamie and Claire to be. Have they really turned the corner?

Where you satisfied by Claire and Jamie’s reconciliation? Were the bite marks adequately explained either the book OR the show? Let us know in the comments.