Murtagh is a man who makes you feel safe, no matter the circumstance. He stands quietly (for the most part) in the background, surveying the situation, alert to any potential danger. He’s got your back, no matter what. He’s loyal to the end – underneath that scowl and tough exterior is a tender heart of pure gold. His dedication to Jamie is unwavering, so when things start to go wrong for Murtagh, my heart goes out to him.

“I failed you,” he tells Jamie at the warehouse, referring to the attack in the alley. Even though he was outnumbered three to one and attacked from above, Murtagh cannot forgive himself for putting Claire and the baby in danger, and for what happened to that “wee lassie.” He tells Jamie that the attack was some sort of high-class gang initiation (Les Disciples) which involved the taking of a maidenhead (sorry, Mary). Jamie reassures him as best he can and encourages him to investigate the Comte St. Germain’s possible involvement. Murtagh leaves Jamie with a vow, “I will lay just vengeance at your feet, or be damned.” When Murtagh says it, you can take it to the bank. He is a man of his word. 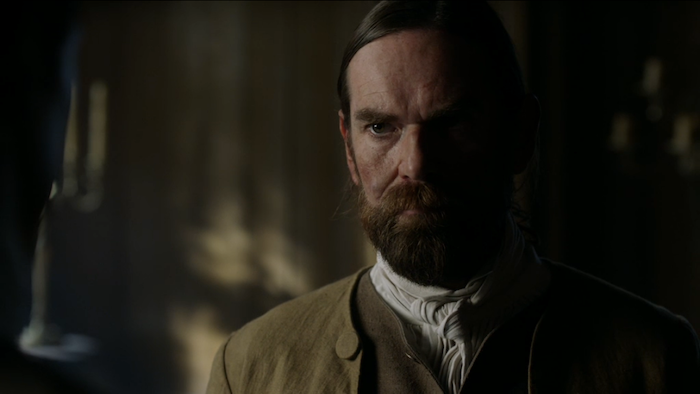 I felt like Murtagh was on solid ground again – then the second shoe dropped. Jamie challenged Jack Randall to a duel, and Murtagh will be his second. Of course he will. It would be unfathomable to think of anyone else having Jamie’s back in a duel. They discuss the details – Murtagh will work them out with Jack’s second. Of course, Jack will have his choice of weapons, since he’s been challenged. Will he choose pistols? Jamie thinks not. Too quick, and too far away. Jack will want to look Jamie in the eye. Then it will probably be blades. Murtagh reminds Jamie that Jack is probably no slouch with a blade, since he is Captain of His Majesty’s Eighth Dragoons. Jamie is exercising his injured hand when Claire enters and announces to them that there will be no duel.

She’s falsely accused Jack of the attack in the alley to buy herself time to change Jamie’s mind. Jamie asks her if she’s lost hers. Dueling is banned in France, she argues. You have a wife to look after, and will soon be a father. In a rare outburst, Murtagh makes his feelings known. “Christ, woman! What have ye done?”
Jamie informs her that there are places in Paris unknown to the authorities where the duel can take place. “He won’t get caught – I’ll see to it,” Murtagh tells her. The argument is not going Claire’s way, and she orders Murtagh from the room. It’s gut-wrenching, listening to Claire being so dismissive of Murtagh. Has she forgotten that he’s the one who saved her (from an attack by Jack Randall) soon after she arrived in 1743? Helped her find and rescue Jamie from Wentworth Prison? Accompanied them to France when he’d rather be in Scotland? Claire is so self-absorbed in her mission to save Frank that she hasn’t a shred of consideration or compassion for Murtagh. This is his reward for unfaltering loyalty. Claire should apologize, but she has to get Jamie’s buy-in regarding her decision, and Murtagh can’t know the real reason why.
Murtagh leaves without a word, casting an angry glance at Claire as he passes her on his way out. He leaves silently out of respect and love for Jamie. Claire, not so much. Claire may have dismissed Murtagh from the room, but we can rest assured, when a duel takes place between Jamie and Jack Randall, Murtagh will be there, as promised.

Was Murtagh justified in his frustration?  Was Jamie’s response to Murtagh at the warehouse fair?