What happened to the sex in Outlander season two?

We all knew when we started Season 2 of Outlander that eventually we would have to face #Droughtlander — that long interminable break while Ron D. Moore et al work their magic to create Season 3. What we did not realize was that we were going to have to live through #SexDroughtlander as well.

Yes, after a groundbreaking Season 1, a season in which we actually saw sex from a woman’s point of view (!) and the development of how a healthy sex life can be a critical part of a relationship between equals (!), we have now been subjected to, well, not much of anything. Which leaves me asking the question I think I can safely say thousands of Outlander fans around the world are asking: When did Outlander become Everybody Loves Raymond?

Let me start by saying I loved Everybody Loves Raymond. A highly popular, award-winning American sitcom, it ran for almost nine years, following the trials and and tribulations of Ray Barone, a sportswriter, and his long-suffering wife, Debra. His in-laws and brother lived nearby. The storylines were often based on real-life encounters by the lead actor/writer, comedian Ray Romano. It was funny; it was light. It was, above all, a continuation of the marriage stereotype so often portrayed on TV, which worked perfectly well for what it was.

In total, wonderfully refreshing contrast, Outlander broke down barriers in Season 1. Thanks to the amazing source material by Diana Gabaldon, we saw how a healthy relationship develops. Sex — caring, interesting, consensual, focused-on-each-other’s-needs sex — was an important part of that. Sex was a way for Jamie and Claire to find and discover each other, a way to reconnect after a fight, a way to show their love — literally — for each other.

And so we had memories and images like this… 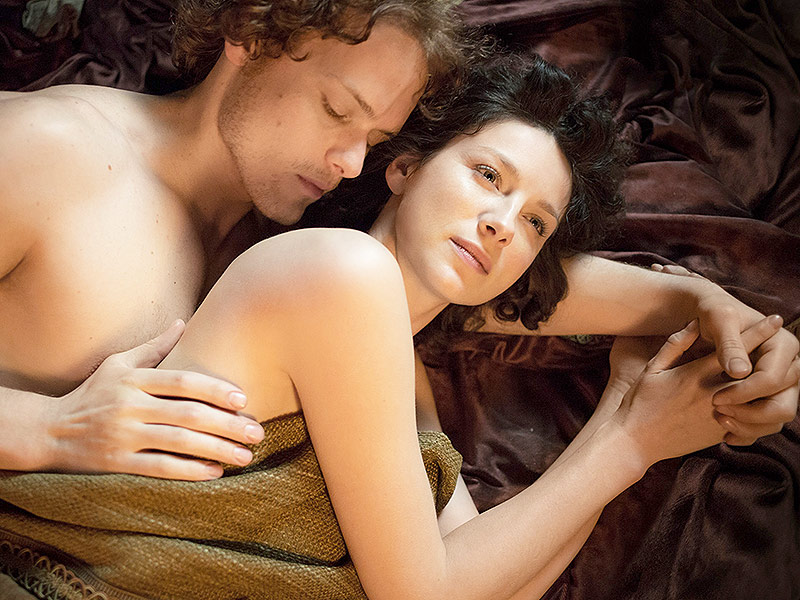 Enter Season 2. Yes, Jamie has had to get over his PTSD and kudos to the writers for tackling that head-on in the TV version. And yes, Jamie and Claire have a lot going on in France and aren’t totally comfortable with their roles and that deceptive way of living seeps into their relationship. And then, yes, we finally have the horrible miscarriage and all of the emotional healing that must occur for both Claire and Jamie. That is all important and the Outlander crew did an impressive job portraying these important story arcs well.

But dear God, we also know that sex is a critical way for Jamie and Claire to reconnect. And we also know that they have to conceive a child somewhere this season. Based on what we’ve seen so far — because with two episodes left, Claire must be pregnant with Bree at this point — the union that created her was done offstage, our only hint that one scene where Jamie picks Claire up and carries her to the bed. Fade to black. You could almost hear women screaming as the fade to black occurred. Are you kidding me? We’re not going to get any? (Because who are we kidding….when Jamie and Claire are having sex, we’re right there with them vicariously.)

Apparently in season 2, the Outlander writers decided Jamie’s question in “The Wedding” only had one answer. Which brings us to the supposed reason why sex has been noticeably absent this season. Moore and others in the cast have been selling the almost-sexless season this way: We don’t do gratuitous sex, they’ve said enough times to be supremely annoying. We only do sex as part of a storyline; it needs to push along the plot in some way. Even Diana Gabaldon sold this storyline in this recent tweet as the whining about sex grew louder.

To this “official” storyline,  I offer up Exhibit A: the opening to “The Pricking of My Thumbs.” Yes, that was Season 1, but if not doing gratuitous sex is one of the producers’ underlying missions, it should be consistent from season to season, right? What “storyline” did that move along exactly? Don’t get me wrong. That scene alone was a major reason I wrote my first post proclaiming Outlander’s role in singlehandedly raising awareness about women’s interest in sex. (Here’s your second chance to take a break and read about lady porn.) But storyline? We already understood that Claire and Jamie are young lovers and that they’re using sex as one of the ways to get to understand/know each other, etc. We didn’t need that scene to know Jamie is interested in giving pleasure as much as he is in receiving it. Just sayin’.

So that claim just doesn’t ring true. Indeed, it feels a little dismissive, almost as if they feel the fans are a little one-dimensional both in their understanding of Claire and Jamie’s relationship and in their own needs to see some sex. We actually love these books and show for a whole host of other, more complex reasons. You don’t obsessively reread and rewatch Outlander just for the sex, people. Don’t wave your hands at us as if we’re teens in love.

Now, DIA is admittedly a complicated book with many plot lines to weave together. And to pull it together for TV-only viewers must be even trickier. But in a show with 13 episodes — that’s 810 minutes with our upcoming bonus finale — you would think they could figure out a way to feature a few minutes of Clamie time. (Thank you, editor Kendra, for that amazing phrase in our pre-post chat.)

The problem with the choice the producers have made this season is that they’ve taken a step back into marriage stereotype — that once you get married, life is just too busy to take time for each other, for exploring this important part of relationship. And that’s just sad. It’s also less feminist. It’s a step backward.

The producers/writers claim the complicated story doesn’t leave time for sex scenes. I’m no screenwriter so I’m sure this suggestion will be shot down. But we could have done less with Claire-as-dentist in what was otherwise a wonderful episode, “Vengeance Is Mine,” (not coincidentally, one written by Diana Gabaldon), and inserted 2-3 minutes of Claire and Jamie having an intimate reunion. You might have even placed it around the lovely Gaelic prayer Jamie says over Claire’s sleeping body.

The overall lack of sex and intimacy is particularly frustrating for book readers (and before commenters yell that there’s a difference between intimacy and sex, please know I know that). Part of what is so wonderful about how sex is portrayed in this show is that it is intimate and personal rather than simply groping or, to use a phrase bandied about by producers, gratuitous.  Book readers know that DIA actually contains sex scenes. Not as many as in Outlander or other books in the series perhaps but they are there! And they are important! They show the evolution of young lovers into a newly-married couple for whom sex still remains a part of their lives.

An example for those of you who haven’t read the book: It’s after Prestonpans so it’s not a spoiler other than the obvious — that it’s a sex scene. Jamie has taken Claire away to sleep separately from the men. It is not long into the snuggling, though, when Jamie’s interest in Claire, er, arises.

“Surely not,” I said, amused despite my tiredness. “Jamie, you must be half-dead.”

He laughed tiredly, holding me close with one large, warm hand on the small of my back.

“A lot more than half, Sassenach. I’m knackered, and my cock’s the only thing too stupid to know it. I canna lie wi’ ye without wanting you, but wanting’s all I’m like to do.”

Fast forward a bit for space here and also, you know, to echo TV time….

Without the hampering petticoats, it was easy.  I felt as though I were floating myself, rising without volitions, drifting my skirts up the length of his body, settling over him like a cloud on a hilltop, sheltering his need.

His eyes were closed, head laid back, the red gold of his hair tumbled coarsely in the leaves. But his hands rose together and settled surely on my waist, resting without weight on the curve of my hips.

My eyes closed as well, and I felt the shapes of his mind, as surely as I felt those of his body under me; exhaustion blocked our every thought and memory; every sensation but the knowledge of each other.

“Not…long,” he whispered. I nodded, knowing he felt what he did not see, and rose above him thighs powerful and sure under the stained fabric of my gown.

Once, and twice, and again, and once again, and the tremor rose through him and through me, like the rising of water through the roots of a plant and into its leaves.

The breath left him in a sigh, and I felt his descent into unconsciousness like the dimming of a lamp. I fell beside him, with barely time to draw the heavy folds of the cloak up over us before the darkness filled me, and I lay weighted to the earth by the heavy warmth of his seed in my belly. We slept.”

If that doesn’t make you a book reader, I don’t know what will. Trust me, there’s more where that came from.

But here’s the real issue behind (Mostly) Sexless Season 2: The TV show producers set up expectations in Season 1 that they were breaking new ground in this category, that they recognized Claire was a strong, smart and — yes — sexual woman with power. And now they’ve just mostly left us hanging. We’ve seen plenty of Claire smarts and strength this season, but the third part of the tripod is missing. The first season liberated a whole lot of women viewers and then….left them hanging in Season 2.

Season 1 helped a whole lot of women rediscover their sexuality, to openly discuss sex and potentially enjoy sex, or learn more about sex and sex in relationship and sex as relationship and….that list could go on. The producers opened the doors, invited people in and then left the room…..

Here’s hoping they remember how to open the door for Season 3.

What have you thought about the lack of sex scenes in Season 2? Has this hampered your enjoyment of Outlander, overall, or did you simply not need it?