When a Gift Becomes a Debt

Jamie and Claire have found their way back to each other! Break out the port, whisky, or your beverage of choice for a celebratory drink! But wait. What? Hold the mental images of sex, tenderness, and re-connection. Jack Randall is back! Instead of two people caressing and canoodling, Claire and Jamie are in a heated debate, negotiating the future based on events of the past and present.

Claire tells Jamie she gave him a gift when she told him that Jack Randall was alive. Jamie wants to claim the gift and kill Jack in a duel. Seeing Jack die will go a long way in healing Jamie and rid him of the demons that have been plaguing him. Claire witnessed the horror inflicted upon Jamie, and sees how it still weighs on him. How can she deny him the justice he’s entitled to? Where do her loyalties lie?

Claire doesn’t want Jamie to kill Jack, because Jack is supposed to marry Mary Hawkins, and their child will eventually lead to Frank. If Jamie kills Jack, then Frank won’t exist; he won’t appear on the family tree documented in the Bible Frank showed Claire. Frank is innocent – he played no part of what is happening now, and deserves to live, Claire explains. I’m confused by Claire’s loyalty to Frank. I know he was her first husband, and she loved him. She had the chance to return to him through the stones – Jamie led her there and said goodbye. Claire made a conscious decision to leave the stones and return to Jamie, and their life in the 1700s. What’s going on with Claire? 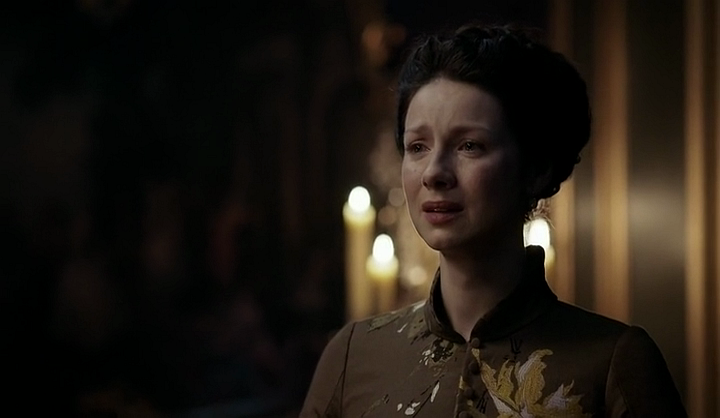 She even went to the Bastille and filed a false complaint against Jack, saying he was the one behind the attack in the alley. She claims she did it to buy her time to convince Jamie not to proceed with the duel. How long will they keep Jack? Overnight? A day or two? When he is finally released, he’s going to be more than a bit angry, and more determined than ever to kill Jamie, probably in a slow, sadistic way. Or, perhaps not kill him at all, but spirit him away to continue his warped, attentive relationship (perhaps ending in death) at some secluded, secret location. Claire’s efforts at stopping the duel may very well backfire in a big way.

My heart broke for Murtagh. There he is, again, by Jamie’s side. Loyal and steadfast. Ready to defend him to the death. He offers to be Jamie’s second, and they discuss the fact that Jack will be the one to choose the dueling weapons, since he was the one challenged. Pistols? Probably not. “Too quick,” Jamie says. “And too far apart.” Most likely the blade. Murtagh points out that since Jack is Captain of His Majesty’s Eighth Dragoons, he’s probably no slouch with a blade. Claire can’t have Murtagh learn the reason behind her actions, and orders him from the room. Murtagh is not the type who would take kindly to being ordered about by a woman, yet he leaves without a word out of respect for Jamie, and for Claire, to some degree. I wonder if he regrets rescuing her from Jack in the woods all those months ago. He still does not know Claire’s time-traveling secret, but this is not the time for that conversation. And even if he knew, he would probably side with Jamie. 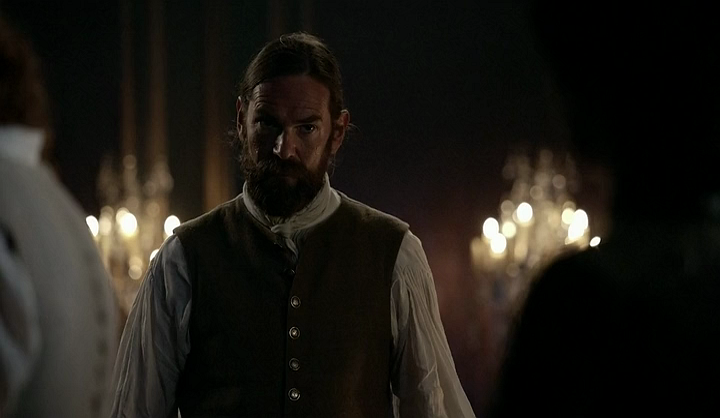 Claire argues for the duel to be delayed one year. That will allow enough time for Jack and Mary to be wed and Frank’s ancestor conceived. “You owe me a life,” she demands, her chin jutting out in defiance. She’s saved Jamie’s life not once, but twice, and he needs to do this in order to save Frank’s. Is she trying to ease her guilty conscience?

Claire claims her debt, and Jamie is a man of honor. He pays his debts. Even so far as pointing his blade at his own chest and inviting Claire to end it, then and there. He cannot live while Randall lives. In the end, he agrees to delay the duel one year, and not a day more. She tosses the blade aside and tries to show her gratitude to Jamie for his acceptance of her terms. It’s not going to be that simple. “Do not touch me,” Jamie growls back at her. And, in those four words, it feels like all of the finding their way back to each other has crumbled into dust and ash.

Was Jamie’s anger justified?  How much would you risk to stop an ex-lover from being blinked from existence?