May I Speak Frankly? Our Love-Hate Relationship with Outlander’s Mr. October

Please do NOT leave this page; not just yet.

Yes, this piece is about the F word, so sit down and bear with me because I just had to run the gauntlet of the bored expressions of the first class passengers as I headed to my tiny space allotment in coach, measured in mere inches, to seat 32C.  I, too, hope to be bored someday.  Meanwhile, I pray that United doesn’t yet again change the Frequent Flyer rules, spiraling the miles redemption process into a pattern of a Franz Kafka novel.

On this flight to the West coast, I am pondering Frank Randall.  Maybe it’s because I just finished watching Money Monster on the big big screen on the economy seat back in front of me, and Caitriona Balfe’s luminous face brought Outlander to mind.  Who am I kidding?  Outlander is ALWAYS to mind round here. TBH, I switched to the “classics” offerings after Money Monster, and chose Viva Las Vegas, which I would have stuck with, but my whoops of laughter were becoming uncontrollable, and people were sleeping.  And those were the serious scenes of that old Elvis film.

Should you be in possession of an itchy Amazon finger for all things Outlander, you likely own the official 2016 Outlander Starz Calendar and have already flipped the page to October.  Here, in splendorous 1940s garb, are Claire and Frank Randall.  Feast your eyes, friends of Frank!

So, it’s Frank – Mr October, and all month long.  I await the comments on social media describing the precise dimension of sticky note required to adequately cover Frank’s (and Tobias Menzies‘, by default) face on their calendar. This brandishing of Exacto knives is accompanied by lamentations of having to see Frank FOR THE ENTIRE MONTH.  For every single vision of Frank, we are deprived of an image of that, um, other guy.

The brilliant Tobias Menzies brings screen-Frank to life; a sophisticated, debonair, and supremely edgy Frank. Menzies’ skill and smooth looks have garnered himself a number of Facebook pages, such as Tobias’s Tribe, where fans celebrate the difference between the actor and the character, and never use sticky notes. 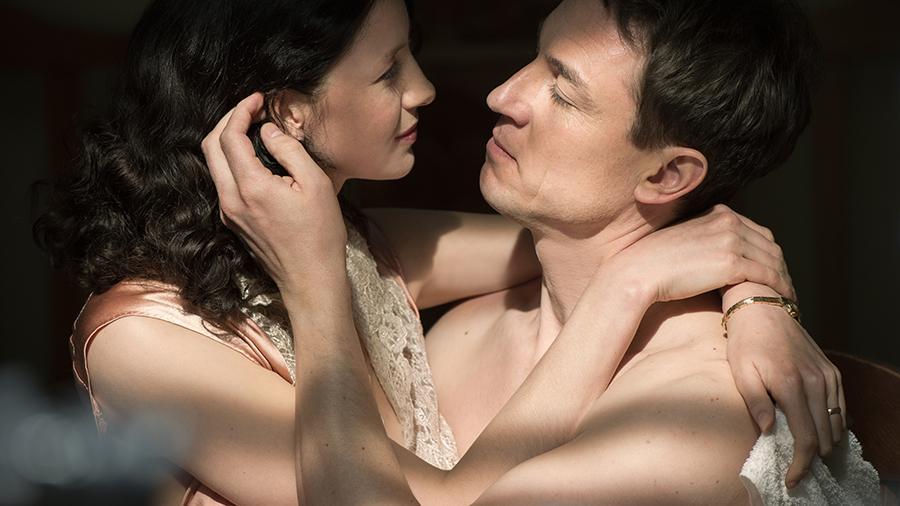 As I am currently listening to Voyager, the book with which I cheat on Outlander, and the massive roller coaster of a story that will be Season 3 of the Starz adaptation of the series, I am recalling Frank the “bloody bastard”.  As I cheerfully tolerate all the scenes that comprise the buildup to you-know-what, to that which may be the mothership of all the great Outlander sacred moments; the moment we are worried sick about and praying to whatever fates may be that it please be done right! Non-bookies, this will all make sense, depending on how faithful Ron D. Moore is to Diana Gabaldon’s story.

But what is it about Frank?  Claire is clearly in love with him as the Outlander story unfolds in the early days. Upon first read of the introductory chapters of Outlander, I had no doubts of that love. I still have no doubts of it.  But that was then. My problem is that I’m not quite so sure how faithful I want RDM to be with the Frank material as we move forward with the story, because Frank the character evokes feelings in most of us, and passionately so.

I’ve mentioned that Frank is necessary for the story, and so is EVERY character, because, you know, conflict. My fellow writer, Anne, pondered the same when she asked us whether Frank was a “bit player or significant to the story?”  Angel Frank sits on one shoulder, convincing me of his general niceties toward humanity and this overall narrative.  But then Devil Frank rears his Fedora-hatted head and threatens to prove otherwise.  What’s an Outlander lover to do but ramble off the pros and cons of Frank to help settle my utterly conflicted mind.  Ergo, that list. 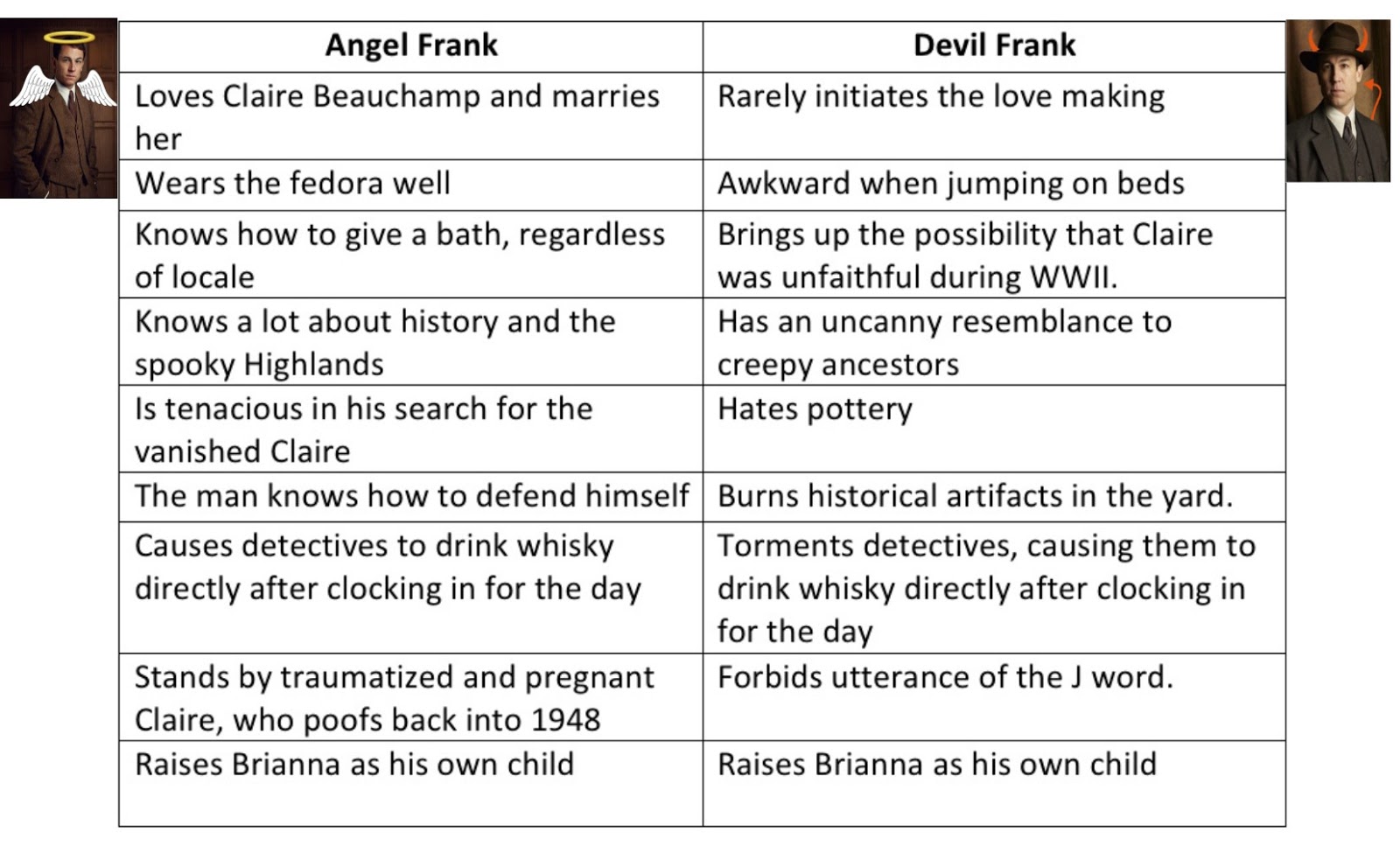 Seen as a sympathetic figure, tragically cheated out of a marriage, or as a philandering, stepping-out kind of guy: take your pick – however you choose, we are passionate about Frank.  Truly, there is no Outlander without Mr. Frank Randall.

What do you feel are Frank’s best and worst moments so far in the Starz adaptation?
How much, if any, do we need of Frank Randall?