Behind the Scenes at the BAFTAs: Outlander Up Close and Personal

Who knew that on the 21st September 2016, I would meet my BFF Outlander friends on a West End Street in Glasgow.  Andree, Dora, Morag, Ren, Sabrina and I started the day as strangers with a mutual interest (or should I say obsession?) and ended the day as friends, having spent all day together watching the Boston scenes being filmed, sharing Outlander stories and discussing when our next Outlander adventure would be.  From this day forward, we proclaimed ourselves the “New Glasgow Girls.”

We decided on a group trip to The Gathering convention in Germany next year but then along came BAFTAs in Scotland, and we thought, “why wait until next year?” What’s a few Outlander-obsessed pals to do but start plotting our latest behind the scenes with Outlander adventure! And here’s how it happened that we found ourselves on the red carpet of the BAFTAs meeting our favorite stars of the show only a few weeks later…

I had seen that Outlander was nominated for a variety of awards but hadn’t taken much more notice than that.  Then, when Sabrina mentioned she was thinking of coming over from Germany for the event, I started taking a lot more notice!  Out of the six in our group, four of us decided we would go. Unfortunately, Andree returned to her home country of Australia a few weeks after we met and Ren was on holiday (although she proclaimed that meeting Sam and Caitriona would have taken priority over Spain, her sister did not agree!). As we were discussing the event, we realized we could buy tickets online for the after party (really?), and for only £30 (again, really?).  We all eagerly started to fill in our application forms until we got to the section that asked who we were.  It transpired that ‘if you’re not in the film industry, you’re not getting in.”

So, plan number one failed.  Fortunately, there was (spontaneous) plan number two and I managed to book a room in the Radisson Blu Hotel where the ceremony would be held – hurrah!  The room was non-refundable so there was no going back now! 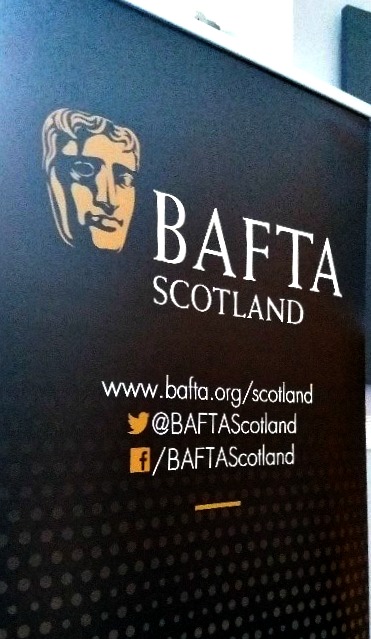 November 6th arrived and I took an early flight up to Glasgow. Morag kindly picked me up from the airport and took me to the hotel, not without problems. Roads were closed, diversions were in place and there was a lot of traffic. Didn’t they know we had somewhere (with a red carpet) to be?! We arrived after not too long to find the street outside the hotel rather empty. We took that as a good sign as it meant we should be able to get a good view of the red carpet when it was rolled out later.

After a quick change in my room involving lots of layers and some extremely effective feet warmers provided by Dora, I headed back down to the foyer.  There I stood with Dora, Sabrina and her friend Doris – all four of us grinning like Cheshire Cats next to the BAFTA stand, just waiting to see who would arrive first! Morag would be returning to join us later.

First to arrive was Douglas Henshall.  Douglas played Taran MacQuarrie in Outlander Episode 1.13, “The Watch”, and was nominated for Best Actor (up against Sam) for his role on Shetland.  He kept to himself but was more than happy to sign autographs and take photos with us.  Next to arrive was Gary Lewis, our wonderful Colum MacKenzie.  And, what a darling he is!  He said “hello” to us all and went to get a coffee in the bar.  By this time, a small crowd had started to gather outside.  We went out to join them and Gary, still carrying his suit in a bag over his shoulder, came out and spent time signing autographs, taking photos and giving out lots of hugs and kisses (he sure has a lot of love to give, that man).  He then left to go and write his speech for that evening. 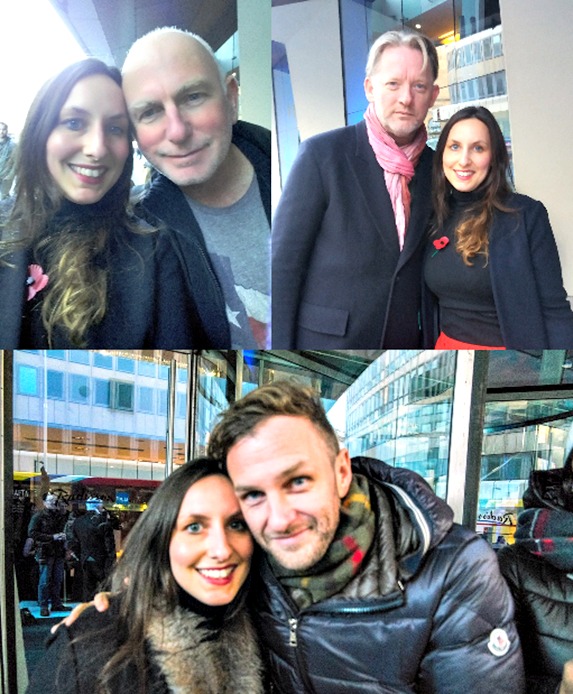 After not too much longer, Steven Cree (Ian Murray) appeared.  He was his usual jovial self and, like Gary, spent time signing autographs and taking photos with us all.  At this point, some burly men in kilts came out of the hotel and started to move the barriers into place.  So then, as if the MacKenzie Clan had shouted ‘Tulach Ard!’, we charged over to the barriers to ensure we got a good viewing spot.  Being only 5 feet tall, I had to get to the front if I wanted to secure a chance of seeing anything! Fortunately, I got a good place at the front, next to the door to the hotel – the last stopping place before the guests went inside.

We only had to wait an hour or so before guests started to arrive and John, the doorman, kept us entertained during that time.  I had my phone, my Harris Tweed autograph book and my camera all at the ready, not sure which I would need first.  A few guests had already arrived and made their way down the red carpet by the time the first Outlander star arrived!  We cheered as the lovely Bill Paterson (Ned Gowan) made his way down the carpet, stopping to chat with fans along the way.  He signed autographs and took photos, and even managed to take a ‘selfie’ with someone further back in the crowd, after exclaiming, “I have no idea what to do!”  Next was Duncan Lacroix (Murtagh, of course) who no longer had his long hair and beard!  I asked him if he missed his beard and he immediately answered, “no!” but did admit he missed the food he used to find in it!  David Berry (the recently cast Lord John Grey), Scott Kyle (Ross) and Steven Cree all followed, each stopping to interact with the fans. They all looked genuinely happy to be there, just as we were. 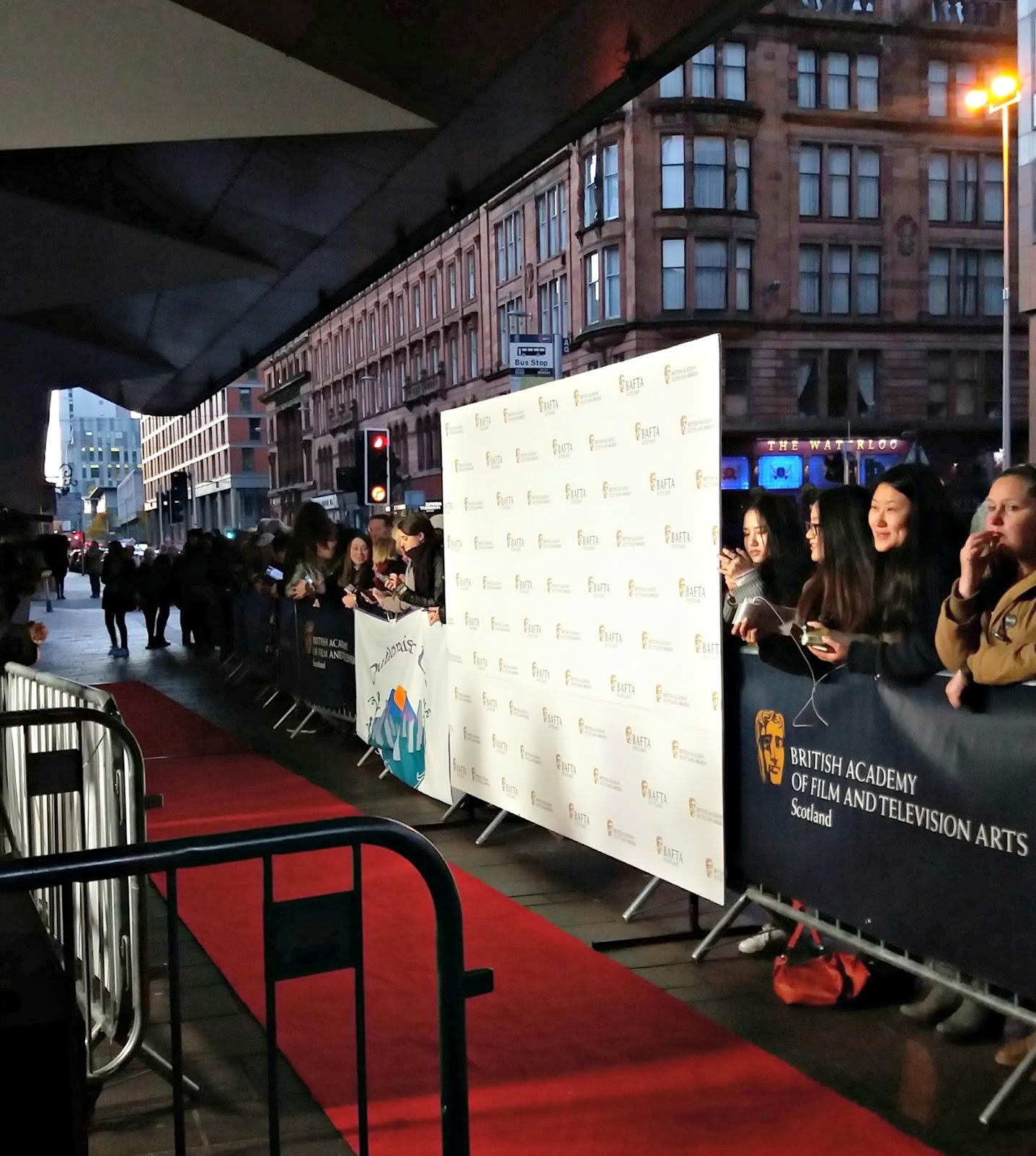 Then there was an excited bustle amongst the crowds, which only grew in intensity as Sam Heughan and Caitriona Balfe appeared at the start of the red carpet along with showrunner Ron Moore.  They went straight to the fans at the start of the line and spent time with them before being called away to do an interview and take official photos.  They then made their made down the rest of the line, making sure they interacted with as many fans as they could.  Cait had to tell a couple of people off for pushing at the back and told them to wait their turn.  She looked as elegant as ever and I found myself mesmerized by her ‘Snow White’ appearance when I saw her up close.  Sam also looked extremely dapper in his suit with his new straightened hair style.  We had previously asked John, the aforementioned doorman, to be particularly slow when opening the door for Sam and Cait, but this was the moment when he proved that his job was not worth risking just to please some dedicated Outlander fans! 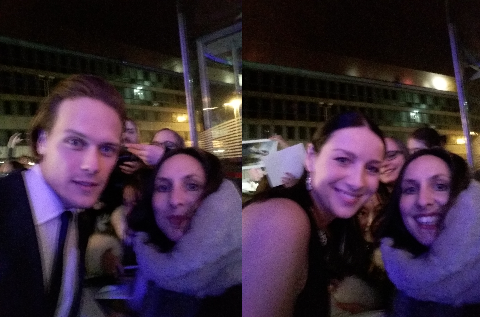 Once all the guests had entered the hotel and made their way upstairs to the event room, the four of us went in and up to our rooms to change out of our many layers and into some more appropriate evening wear.  We sat downstairs in the hotel bar and watched the live stream of the BAFTAs on Dora’s laptop.  Just as Sam and Cait came on stage to present an award, the streaming stopped! Failing to find any other source of streaming, we ordered food and ate whilst waiting for the streaming to resume.  It was a tease to hear the punctuated cheers coming from the room just above us and wondering if they were for any of our stars!

Eventually the live stream resumed and we prayed that we hadn’t missed either the Best Actor or Best Actress awards.  Fortunately, we hadn’t.  We waited with baited breath as the Best Actor nominees were announced.  Sam was up against tough competition, and while we were sorry for him, we were pleased for fellow Outlander star, Douglas Henshall.

Not long after, the infamous “Outlander Drivers” (David “Davie” Stewart and Andrew “Andy” Finnie) appeared in the bar and sat behind us.  We invited them to watch the streaming with us when the Best Actress award was to be presented.  We all crowded around the little screen, watching and waiting… then Davie checked his phone and said Cait had won, we could hear the cheering upstairs and when the streaming caught up, we all cheered too! The drivers each raised their glass of water or cup of coffee to Cait, especially Andy when she thanked him in her speech.  That was such a memorable experience! 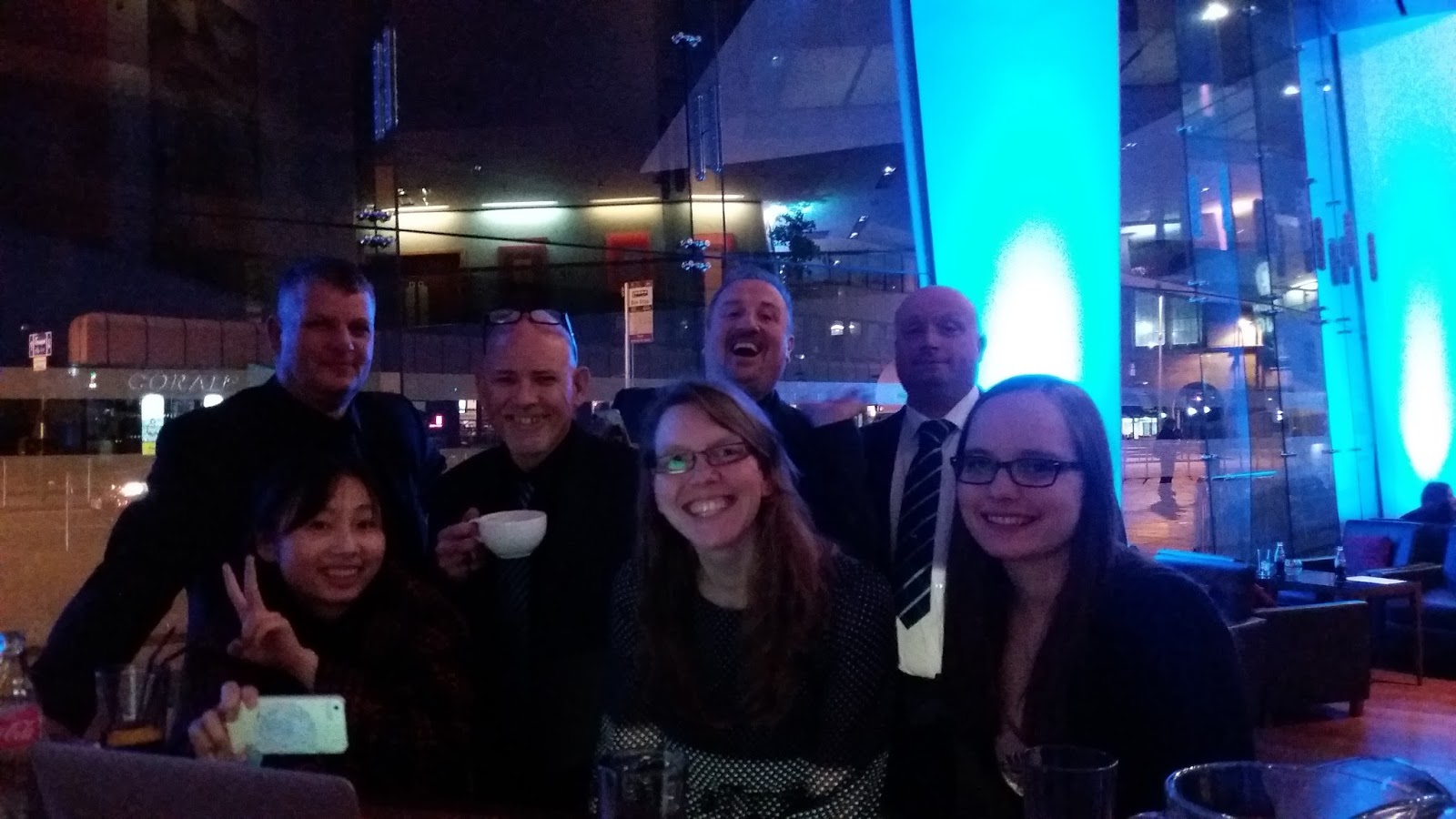 Once the event was over, various guests started coming downstairs, though no Outlander stars yet. Duncan and Ron were the first to leave, then David.  Sam’s driver, Davie, was clock-watching as they had to be up at 5am!  Sam came down not long after.  He chatted briefly to us, signed autographs and took photos, but then autograph hunters rushed in off the street for his autograph and I missed my chance for a photo before he left.

Then Gary came downstairs.  After giving up on ideas of how to smuggle us into the party, he decided to go to bed.  We had, of course, already thought of ways to smuggle ourselves into the party, but the UV hand stamps and security on the stairs and outside the lift made it rather impossible!

Maril Davis then suddenly appeared, which was a wonderful surprise as we didn’t even know she was there!  We took photos with her, which were duly photobombed by Gary Lewis just before he left! 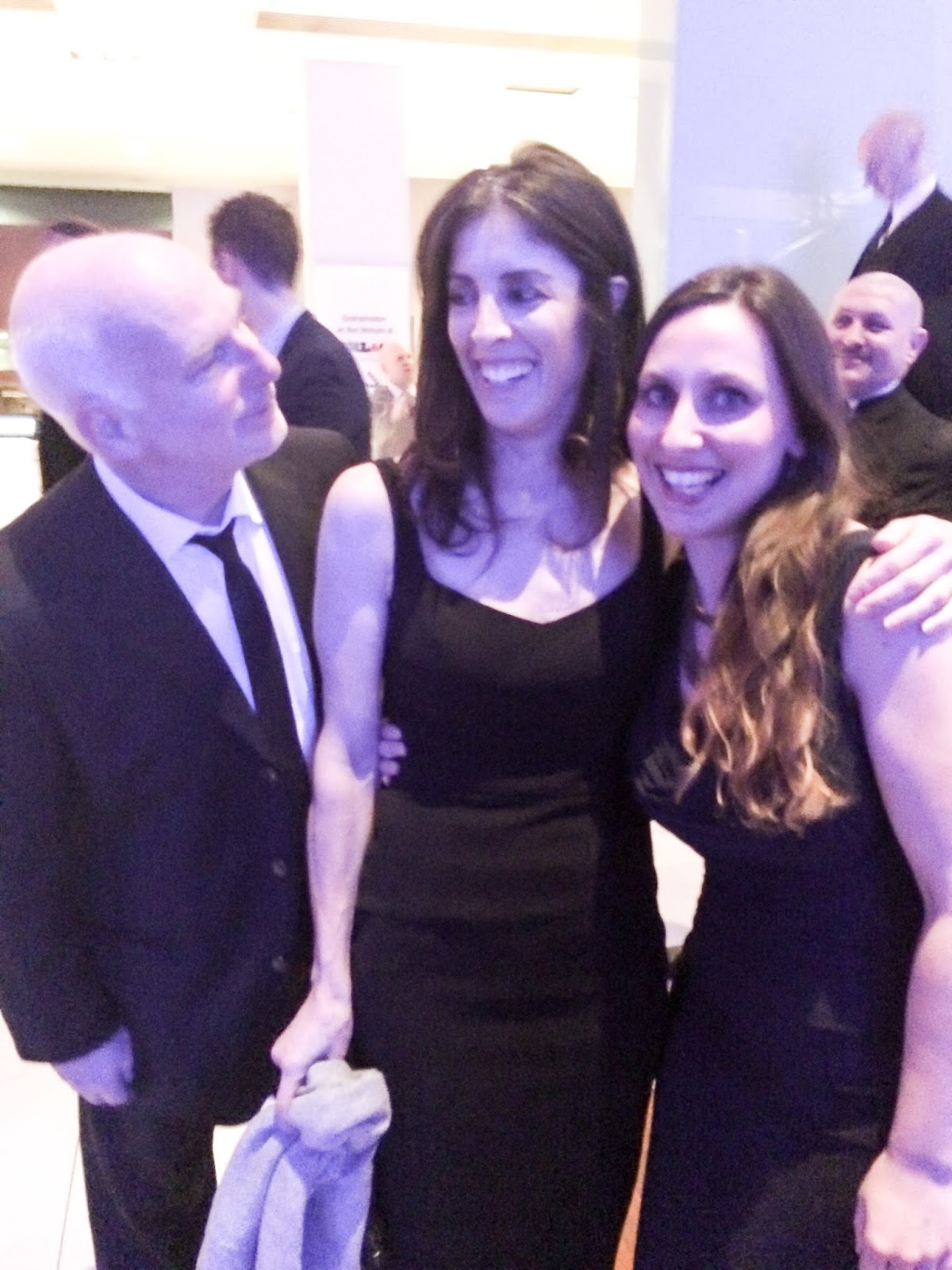 Steven Cree then came down and introduced us to ‘his son’ Jamie, otherwise known as actor Conor McCarry.  We chatted briefly before Conor left and Steven returned upstairs. 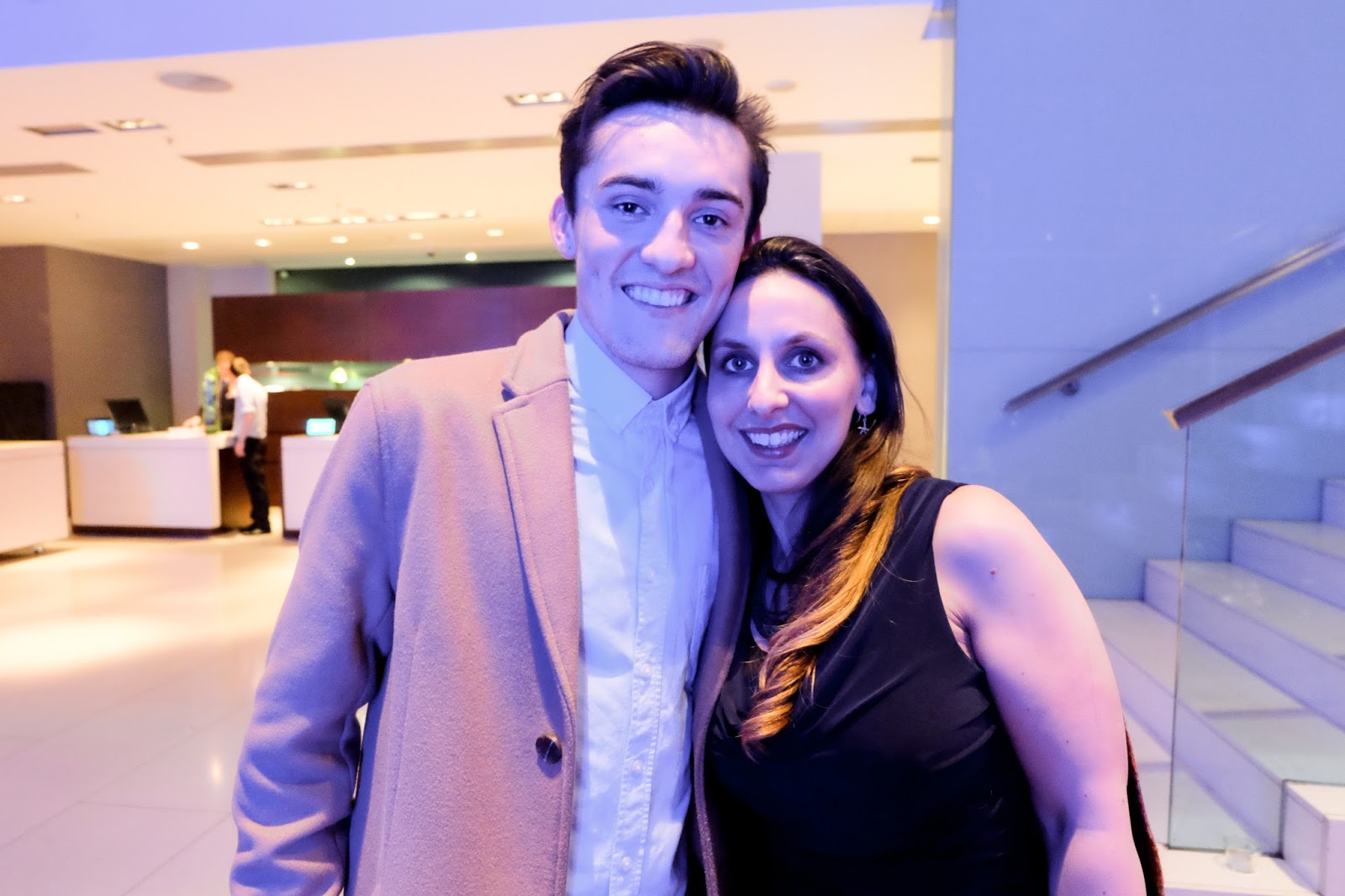 When the party was over, Cait appeared at the top of the stairs. She was surprised to see us still there, but was so polite and stopped to talk to us even though she had a taxi waiting. Again, she signed autographs and took photos with us. Fortunately, there were no unannounced autograph hunters this time! As we said our goodbyes to Cait, we said our goodnights to each other and retired to bed – the Cheshire Cat beam still on my face as I went to sleep. 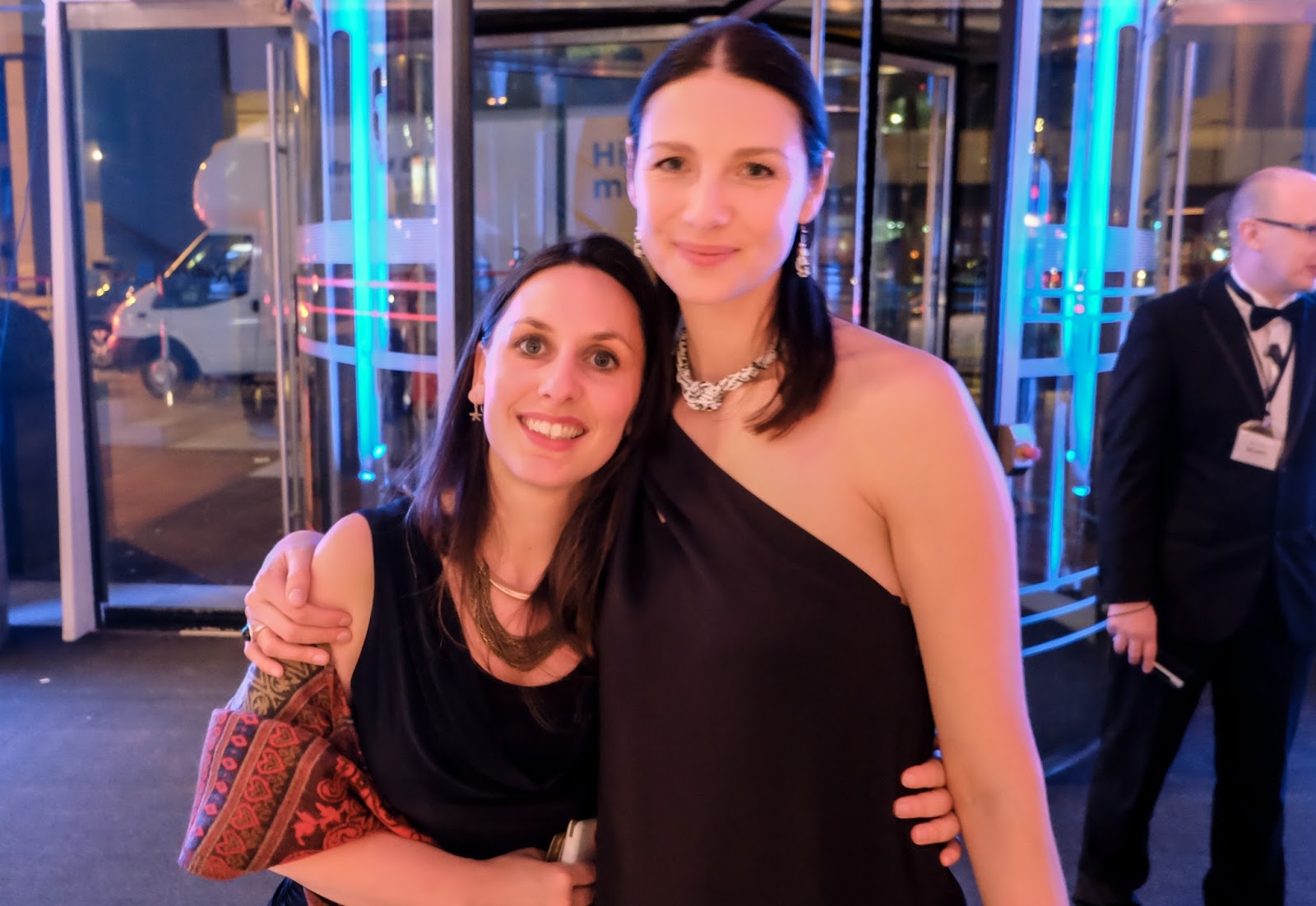 I couldn’t help but feel a little sad when I woke up the next morning knowing that our night at the BAFTAs was over.  The other girls were leaving early so I somberly headed down to breakfast, alone.  Fortunately, it didn’t take long for my mood to brighten as, upon entering the dining room, I got a “hello” from Douglas and Steven and a hug and a kiss from Gary! Alas, everything was good again!

As they left, I sat at my table for one, raised my cup of tea to my fellow New Glasgow Girls, and silently proclaimed, ‘here’s to our next adventure!’

Outlander Cast Blog would like to thank Naomi Booker, Andree Poppleton and all the New Glasgow Girls for sharing their amazing Up Close and Personal Experience at the BAFTAs.   Follow the adventures of the New Glasgow Girls on Twitter here, on Instagram here and on Facebook here.  They are a HOOT!
Who from the Outlander family would you most like to meet? What event(s) or fan experience(s) would you most like the Outlander Cast Blog to cover in the future?