email
Every once in a while, there comes along a soundtrack that provides the very definition of how a show can be watched, interpreted and experienced.
In other words, this is when a show cannot exist without its soundtrack, and obviously, the tracks wouldn’t be the same without the show.  They define each other simultaneously.  This kind of perfect symbiosis exists with shows like ABC’s Lost and Michael Giacchino, AMC’s Halt and Catch Fire and Paul Haslinger, and, yes, even Starz’ Outlander and Bear McCreary.
But McCreary’s third go-round with the music from Outlander is different. The Outlander Season 2 soundtrack feels meatier, more detailed, more cinematic, and, yet, more personal than both his soundtracks for Season 1 of Outlander.  Consequently, this is his best effort for Outlander (and maybe of all his soundtracks) so far.

Despite how great this effort is, however, McCreary’s renowned attention to detail is both his savior, and also his burden.

Read on to see why it’s his best, but also a behemoth that nearly collapses under its own weight, and why you should compare it to The Beatles’ Abbey Road…

Say what you will about Season 2, but Bear McCreary’s work was the single best and most consistent part of the entirety of Season 2.  Without it, I truly believe any familiarity with the characters, settings, and feelings they impart, would have been totally shattered, and consequently, much harder to watch.
McCreary’s familiarity with each major character, and their themes, are what easily carries the viewer through the sometimes bumpy road on screen.  It reminds you why you love the characters, feel their pain when they endure unspeakable tragedy, and stirs your spirit during one of the most creative battle scenes in television history.
But let’s also not get too far ahead of ourselves with showering praise on McCreary, because his work here also suffers from being a tad disjointed, much in the same way the show suffered too.
Click here to purchase Outlander Season 2 Soundtrack on Amazon

One can easily make the case the show could/should have been split into two different seasons.  Ron Moore and co.,  made a gorgeous looking show but couldn’t seem to get both France and Scotland to jibe with each other on a macro story level.  To that end, France never seemed to gain the steam it needed to justify its long, and relatively overstayed existence.

Like RDM, and his efforts, McCreary wrote some of the most delicious music he’s ever created for his French themes,  but they are also where McCreary seems to have a little trouble making it cohere to the larger themes of the series as well.  I believe that it’s not all his fault of course – he has to introduce new characters, new themes, and getting the listener comfortable with new sound,  while also having to add an ENTIRELY new and sonically different culture of French baroque music to an already well-established and wildly popular preexisting Scottish sound.
That is not to say, however, McCreary’s efforts to replicate a very unique tone of French Baroque music fails.  In fact, it’s quite the opposite.  Songs like “Versailles” serve up the pomp and exquisite harpsichord that the height of the French Empire deserves. Yet, “Into Paris” gives you a solemn, introspective, and ultimately personal view into what it must be like for two foreigners becoming familiar with a not so friendly/trustworthy environment.
“Honey Pot,” and “Baroque Chess Match” utilize the playfulness and unique flourishes of the violin, and the all-important sophistication of the harpsichord to their great advantage.  If, however, I were to pick a favorite of the French themes, it would be that of “The Apothecary.”  Maybe it’s my bias towards Giacchino’s soundtrack for Ratatouille, but this song seemed to embody the French feel with its reliance on the accordion, harpsichord, and heavy cello use much in the same way Giacchino framed his French-tinged work for his extremely popular Pixar film.

McCreary’s work in France is refined, exploratory, and, ultimately, a decent asset to expanding his reach into new genres we rarely see in television.  One can hear all the details and efforts he made to give us a truly authentic experience in our French diversion.  But this diversion, and extreme attention to detail, also almost force the album to collapse under its own weight – much in the same way the television season almost did.

The French themes seem to feel like they are separate mini-concertos written for the harpsichord and applied for specific scenes only to benefit those scenes and not the season as whole.  Instead of bolstering a smooth listening experience, the soundtrack swiftly jolts halfway through the album to a completely different range and tonal experience.

Yes, the French work is gorgeous, but it never reappears after the gut-wrenchingly sad, and more familiar, sound of “Faith.” In fact, the Season 2 soundtrack is quite literally split into two very separate segments – one beginning with a pared-down French version of “The Skye Boat Song,” and then is followed up with the more familiar touched-up Jacobite version of the same song at the exact halfway point of the album.

McCreary is clearly more comfortable with the penny whistle and bagpipes than he is with the harpsichord.  Right after “The Jacobite Skye Boat Song,” we are treated to “Je Suis Prest,” and immediately enveloped Gaelic vocals, familiar themes, heavy drums and fast-paced fiddle.  “125 Yards,” “Vengeance At Your Feet,” “The Uprising Begins” and “Prestonpans” are relatively similar –with Prestonpans standing out for its subtle hints of battle charges, and separate crescendos that build the undeniable tension of the most uniquely shot battle scenes in television history.

The sounds seem to be much less labored than the French half of the album, and they flow so easily that with each striking note of the bagpipes one can feel like they are experiencing a direct extension of each of McCreary’s pen strokes on the music sheet, or wave of his baton as he conducts.  Expertly weaved in and out of each song, the familiar themes of Jamie and Claire, wedding theme, and all the others we have come to drool over since the show began, there is a much more poetic and cinematic feel than what McCreary has ever really created.  No song exemplifies this comfort and quality anymore than the brilliant and downright awe-inspiring, “White Roses of Scotland.”

“White Roses of Scotland” utilizes McCreary’s first foray (ever) into a full chorus and the results are nothing short of stunning.  It’s familiar, it’s haunting, and the voices provided by the chorus afford the song a genuine shot of vulnerability as well as a large-scale soundtrack feel.  Once it begins, you feel like Claire – walking through her old haunts of Scotland, trying to come to grips with the fact that you have suddenly found yourself in a time you were born, but also a time you don’t quite belong to anymore.  My words cannot express enough praise for this track as it is the gem that keeps the entire album afloat.

“Tales Of Brianna,” with a brand new theme for our controversial red-haired lass, is also a introspective tale that includes Jamie and Claire’s theme, but also grows its own DNA out of its predecessor. “Running Out Of Time” and “Destiny On Culloden Moor” are serviceable songs that carry you to the end of the album where you are treated to an equally sedated and rousing “A Fraser Officer Survived” that is wildly similar to Outlander Season 1, Vol. 2’s “Setting Sail.”  Another favorite of mine.

There are, however, two songs that I did not explore so far and that is by design – because they don’t quite seem to fit in either category.  Again, not a bad thing, but they don’t help the overall flow of the album itself.  First is the heavily Frank-favored “Leave The Past Behind.”

Frank’s theme is one of the most provocative and emotionally seizing McCreary has to offer in Outlander.  The unique use of the clarinet sets it apart from anything Outlander offers, and rightfully so.  Frank is nowhere near Jamie and Claire in the forties, and neither should be his musical theme. BUT, Frank is still Claire’s husband as well, and like Claire does, Bear seemed to let go of Frank a little too early.  Yes, it is heavily used in the first song, but Frank’s theme should reappear at the end of the album even in the slightest of uses – just as a reminder of Claire’s journey, and our journey as a listener throughout the album to complete the circle Claire so bravely traveled.

Lastly, we are left with “The Duel.”  Unto itself? Brilliant.  Yet, like with all the issues found in this album, it doesn’t seem to have an inherent place within the larger scope of the soundtrack.  What appears to be an attempt to marry French sound with the more traditional use of strings and bagpipes, “The Duel” falls a tad short of what the epic shots on screen produced.

These compelling tracks, immaculately detailed and simply wondrous unto themselves, are also what push the album to almost collapsing under its own weight.  There are too many themes, too many variant sounds, and too little of a cohesive story to tell because the early themes never appear in the later parts of the album as a reminder of where the characters were, and where we had traveled from as a viewer.

Yet, the sheer beauty of what McCreary has created (despite any lack of true connective tissue throughout the whole album) and that run of “Je Suis Prest” through “Prestonpans,” in addition to the superior “White Roses Of Scotland,” makes this his best album yet.

I think the most apropos comparison one could make for the Outlander Season 2 soundtrack would be to that of The Beatles’ album Abbey Road.

When Lennon and McCartney created their final album together, they famous clashed about the overall arch of the LP and how they wanted to approach the music.  Lennon wanted to make a gritty blues style album, whereas McCartney wanted to compose a more unified, poetic, and cohesive unit that would serve as parent to a brand new style of music called the “rock opera.”  Thus the quite literal break halfway into the album that ends with Lennon’s “I Want You (She’s So Heavy), and begins with McCartney’s “Because.”

Like The Beatles’ complicated, oddly divided album who many consider to be their best simply because of the musical genius it took to craft each specific track, the Outlander Season 2 soundtrack is the best of McCreary’s long and illustrious career. 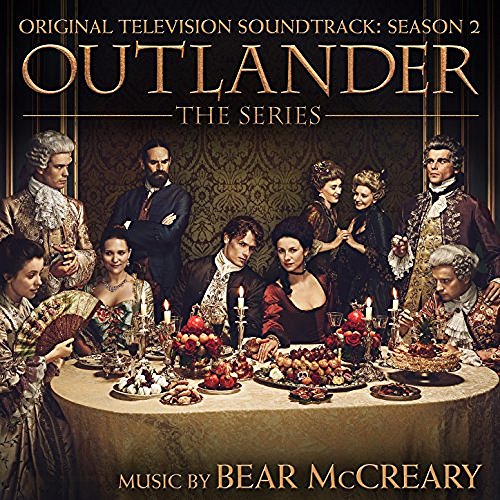 What did you think of the music in Outlander Season 2?  Would you agree that it’s Bear McCreary’s best work yet?