In the Season 2 finale (“Dragonfly in Amber”), Roger asks Claire, “How do you say goodbye to that one person you’ve loved most in the world?” Claire answers, “Whether you want to say goodbye or not, they’re gone and you have to go on living without them.” Roger is referring to Reverend Wakefield and assumes Claire’s response is about Frank. It’s 1968. Frank and Jamie are both dead, but the heart-wrenching grief she carries is reserved for Jamie. She tells Roger she’s never been very good at saying goodbye. She’s putting on a brave face, but she’s still carrying the devastation of leaving Jamie atop Craigh na dun. 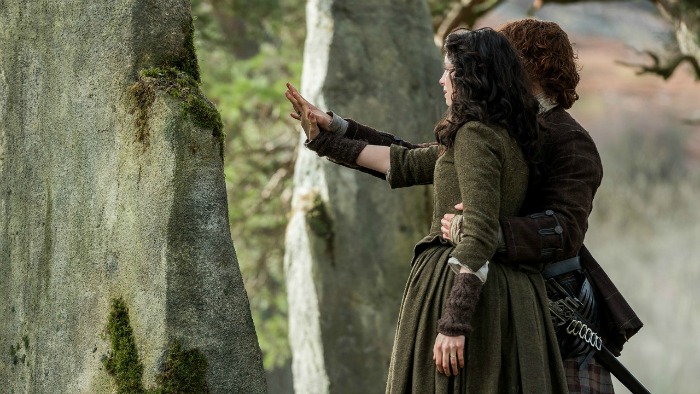 The everyday world puts a time limit on grief, then you must move forward and “get on with it.” You’re allowed one year (if you’re lucky) and then you should be “over” your loss and emerge fresh, bright-eyed and ready to face the world as you once were – less than that if you have a job and want/need to keep it. What about your friends? How long will they remain patient and understanding while you “get over it?” At first, they acknowledge your grief, but as time passes, they become less and less sympathetic. It’s not that they don’t care, but perhaps they feel it’s time for you to “get over it” and move on. Live in the here and now.

Nothing could be further from the truth. You never “get over” losing a loved one – you struggle to find a way to move forward without them. You stumble and lose your emotional footing, but at some point you find a rhythm that enables you to remember them without falling to pieces in public – most of the time. You save that (falling to pieces) for a place that’s safe and comfortable for you, if you can. Because you still do. Fall to pieces, that is. You can’t predict when or where, so you can’t prepare for the next wave of grief.

The triggers remain, and they present themselves when you least expect them. A song that comes on the radio, a catch phrase you used to share, or a note in a drawer written in their hand. You can’t protect yourself from the unexpected jolt of grief. Sometimes you make it through without crying. Sometimes you don’t. Then there are the triggers that can’t be ignored. For Claire, perhaps it’s seeing the date on a calendar (April 16, 1746), a significant place (Lallybroch), or the shock of seeing the dragonfly in amber – the wedding gift to Claire and Jamie from Hugh Monro – in a display case. The pain may be less sharp with the passage of time, but it never goes away. You never “get over” losing a loved one. 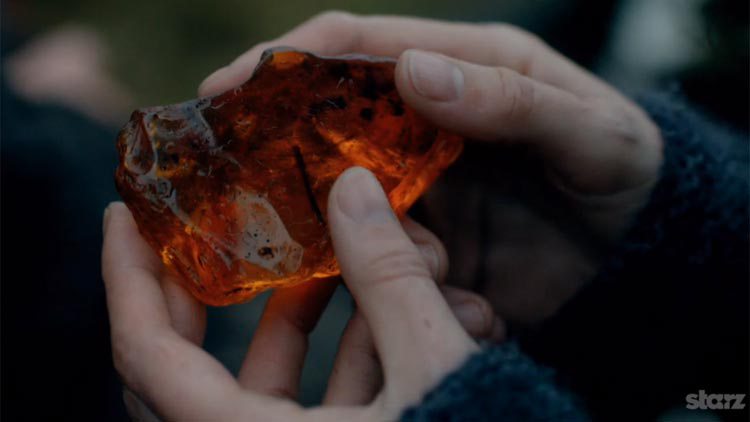 Claire returned to the 20th century to bear her and Jamie’s child in safety. She fulfilled her promise, but the willful, copper-haired Brianna is a constant reminder of Jamie and the love she left behind. She can’t resent Brianna, even though she’s the reason Claire is living in the 20th century with a man she no longer loves and who demanded Brianna be raised as his own. Perhaps seeing Jamie in Brianna is what gets Claire from one minute to the next, one day to the next. Brianna is all Claire has left of Jamie. But the pain and heartache in loss is never far away, and it catches Claire unaware and unprepared. An innocent activity involving a book about birds triggers the memory of a heron and her life in Scotland. With Jamie. She doesn’t have the luxury of falling to pieces right then and there, so she hides her sorrow for another, more “convenient” time. 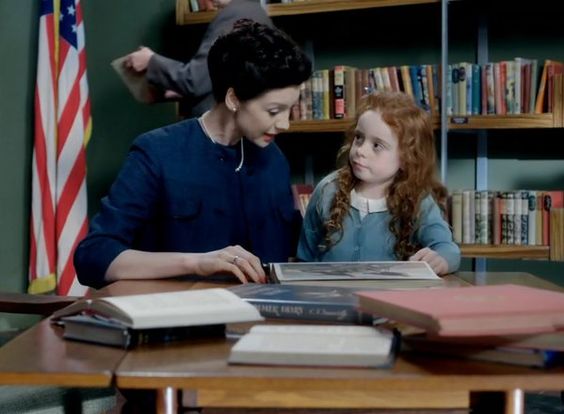 With Frank’s death, Claire is free to pursue Jamie and find out what happened to him at the battle of Culloden. She seeks out the predictable triggers, but why? They’re bound to tear at her heart and uncover the raw pain she’s suppressed for twenty years. Is she seeking closure? Is she looking for a sign that Jamie’s spirit is waiting for her at the places that meant so much to him, and them? Is she hoping to feel his presence, some sign that he’s not so far away? It sounds perfectly normal – returning to a place of significance and memory to find comfort amidst the pain. You cry, you wander about, reliving the memories, managing to smile (maybe even laugh), and then, reluctantly, you leave.
Claire visits a crumbling Lallybroch where the voices of her memories are accompanied by sacred-sounding music. This is hallowed, Fraser ground – a fitting place for her to remember and mourn alone. We hear Jamie’s voice, telling Claire of his father’s blood and sweat in the stones, the arrival of Jenny and Ian’s baby Margaret, young Rabbie McNab excited about the new crop of potatoes, and Jamie reciting a poem – whose line or two are found on the inside of Claire’s wedding ring (in the book). Being alone with memories and giving whatever emotions that accompany them free rein helps keep loved ones close – even in their absence. Our quiet minds have an opportunity to appreciate, and re-live, the time we had with them. Keeping memories close ensures they’ll not be forgotten.

Claire sees an image of Jamie in the entry gate, handsome beyond belief. Is it really him? His ghost? Claire’s memory of him? Is Jamie making himself visible to let Claire know he survived Culloden and is still alive? There are those who believe in a parallel universe where the departed dwell, watch over us, and guide us from where they are. Gone, but not far away. “Random” coincidences or something you swore you saw (really?) could be so much more than your imagination playing tricks on you. You look once and it‘s there. Look again, and it’s gone. The vision may be a sign from Jamie, telling Claire to seek him out, that all is not lost.

Perhaps the dragonfly in amber at the museum is a message from Jamie. The tag states it was found on the battlefield at Culloden Moor, so Claire knows Jamie returned to fight as promised. Of course he would. He’s a Highlander. It’s his destiny, and Murtagh was waiting to fight and die by his side. Claire tearfully gave the amber to him at Craigh na Dun before she returned through the stones. “Keep it with you,” she said.

Did Jamie mean for the amber to be found and for Claire to see it? A message, perhaps? It would have little significance to anyone but them. Claire looks surprisingly composed and detached when she sees it. Has she learned to suppress a trigger moment? In an instant, seemingly insignificant items become precious. A faded photograph, a souvenir you picked out together, or perhaps a ribbon tied on your suitcase when you came for a visit. You can’t part with any of them because they felt the touch of someone you’ve loved and lost. Holding them close helps you span distance, time, and even death itself. If you can hold it in your hand, if you can see or touch it, they don’t seem so far away. It might even ease the pain.

Claire visits the Fraser gravestone on Culloden Moor, pours her heart out to Jamie, and says the goodbye she wasn’t able to when they parted at Craigh na dun. A gravestone is where finality has its say. The stark truth of a death date, carved in granite. There is no arguing with a slab of stone. The one you loved is gone – from this world, at least. The physical body no longer exists, but does a part of them live beyond the grave? A spirit? A soul? Claire came to say her final farewell and thinks that’s the end. Can she really put the past behind her with a “Goodbye, Jamie – my love” and leave him in the 1700s? Does she really want to, or does she think her allotted time for grieving has expired?  Claire doesn’t realize it, but she’s lucky. She’s been given a second chance. Something none of us gets. 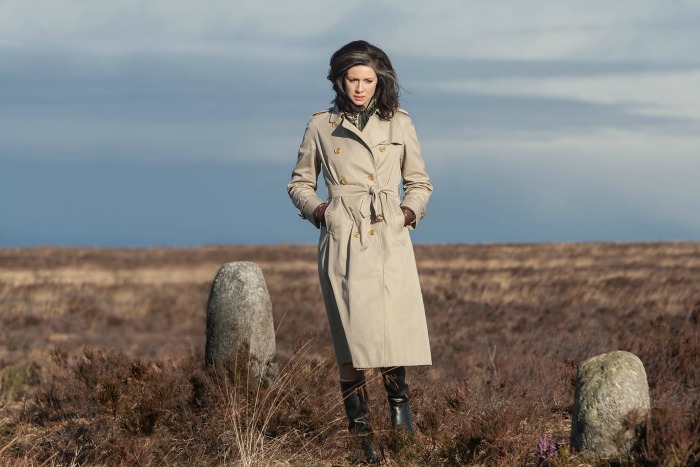 Claire traveled through time and experienced an amazing three years with a man who became the love of her life. She goes through the conventional motions trying to cope with the loss of Jamie, but something won’t let her rest. Could that unrest be the reason we feel the need to return to familiar places that hold memories of those we’ve lost? To hold and keep physical items that bind us to them? She touches the antique pistol on Reverend Wakefield’s mantle and smiles in innocent acknowledgement at Roger’s words regarding the Battle of Culloden, like she knows nothing about it. Something motivated Claire to visit Lallybroch and Culloden – perhaps more than grief or the need for closure. A force unknown to her is steering her towards the news she never thought she’d hear. Whatever it is, it wants Claire’s attention. Someone has a message for her. And that message is loud and clear – Jamie is alive.
Is Jamie the guiding force behind Claire’s travels, and the eventual knowledge that he is still alive? Is Jamie orchestrating her return to him?