Sam Heughan and Caitriona Balfe gave Outlander Fans a special treat today – Live Streaming a Chat on Facebook. The chat lasted only about 15 minutes but was wide-ranging as they took questions from fans.

As usual, the two playfully bantered as they discussed wrapping up filming Episodes 8 and 11 today (which Caitriona referred to as “the penultimate block”) before taking a holiday break. Sam was still in costume, while Caitriona had changed to street clothes as she teased that she was pulling a Sam and “knocking off early” for the day. Sam asked what she was doing the rest of the day and Cait answered maybe baking, decorating her tree, packing up. 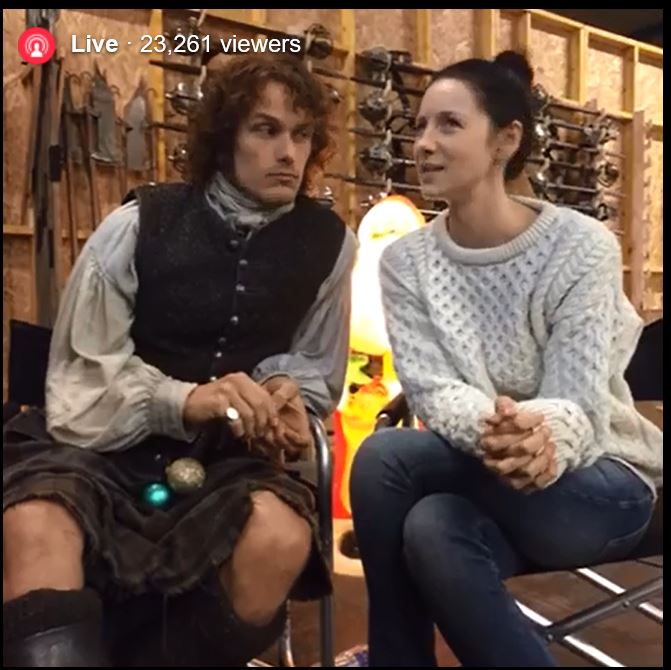 There were a lot of questions about Paris/Season 2 including what each enjoyed most about Paris. Cait answered that she loved working with the actors that play Master Raymond and Mother Hildegard.

Off camera were Maril Davis and Matt Roberts who were teasing both Sam and Cait, during the interview. Roberts at one point brought (animated) Santa Hats over to Sam and Cait to wear. Cait also revealed that neither she or Sam has read Episode 13, which, apparently, Roberts is writing but has yet to complete.

Sam revealed that his favorite Christmas Carols are “Deck the Halls” and “Good King Wenceslas.”

Sam claims his New Year’s resolution is to be a vegetarian for a week while Cait says she is inspired by Sam to exercise more. Both didn’t seem too serious about their resolutions!

Both indicated that they have read only through Book 2 as they don’t want to get ahead of filming.

When asked, both Sam and Cait said their favorite scene from Season 1 is the Fight by the River in Episode 109 “The Reckoning.”

And, not quite sure what those “Christmas Balls” were doing dangling near Sam’s own family jewels but may have something to do with his new Cancer Awareness Campaign or he was just being cheeky!

So, while it was a short chat, both Sam and Cait looked and acted adorable and, as always, were very generous with their time.

Happy Holidays Sam and Cait! We can’t wait for your return to set and the wrap up for filming of Season 2!

Do you want more Outlander chat? Get your fix by listening to The Outlander Cast Podcast with detailed show discussion and amazing interviews with cast, crew, writers and directors of Outlander on Starz