The Five Love Languages in Outlander

Email
The Five Love Languages may be a 21st century phenomenon but do they transfer to 18th century Scotland? We take a look at Outlander’s couples to see.

Gary Chapman’s wildly popular book, The Five Love Languages, has been on the bestseller list since 2009. The basic gist of the book is this — we all give and receive love differently. The key to success in maintaining a relationship, he says, is to know how you and your partner like to give and receive love and then — wait for it — actually let each other know that and then do it. He’s been married 45 years, so I think we can all agree he’s on to something.

Anyway, we decided to apply the five love languages to our favorite Outlander couples. After all, this series is nothing if not an epic love story. Were couples like Ian and Jenny, and Jamie and Claire, love languages experts before their time?

First a few housekeeping details: I haven’t spent years studying this. I looked at the overall concept and took the quiz myself. (You can take it here; you know you want to. Just be sure to come back.) In other words, feel free to weigh in with your own ideas of who might be what. Conversation (always polite, of course) is welcome in the comments.

Also I’m limiting myself to seasons one and two of Outlander. I’ve read all the books (some twice, some three times) and know about a bunch of interesting couples coming down the pike, but I’m not a fan of limiting a blog post to only those who have read ahead. You can certainly weigh in below with other couples-to-come, however — just type spoiler alert before you begin to write. Consider yourself warned, people.

Chapman boils down the five love languages this way, all of which are pretty self-explanatory:
• gift giving
• quality time
• words of affirmation
• acts of service (devotion)
• physical touch.

Each of us has a primary and secondary love language. In our most successful love relationships (which obviously range beyond our mere partner to include friends and all variations of family), we prefer to receive love a certain way. And if we aren’t shown love in a way that resonates with us — if, for instance, we only feel loved by words of affirmation but our partner thinks gift giving is the way to reach our hearts — then it’s almost as if we’re not actually loved. Or it can feel that way. It’s the proverbial two ships passing in the night.

Basically, the way to figure out the best way for your partner to receive love (which can obviously work to your benefit) is to see how he or she gives it. Listen to what they complain most about NOT getting from someone they care about and what they request most often. The idea is that people naturally give love the way they prefer to receive it. If you match those up, bingo. Happy match.

It’s trickier than that IRL, of course. Not all of us know how to/feel comfortable asking for what we want. (BTW family, if you’re reading this, I’m all about words of affirmation, with physical touch and quality time tying for second place. This actually surprised me because I thought tests acts of devotion would rank higher.)

So let’s look at some Outlander couples. We’ll start with some of the secondary couples. 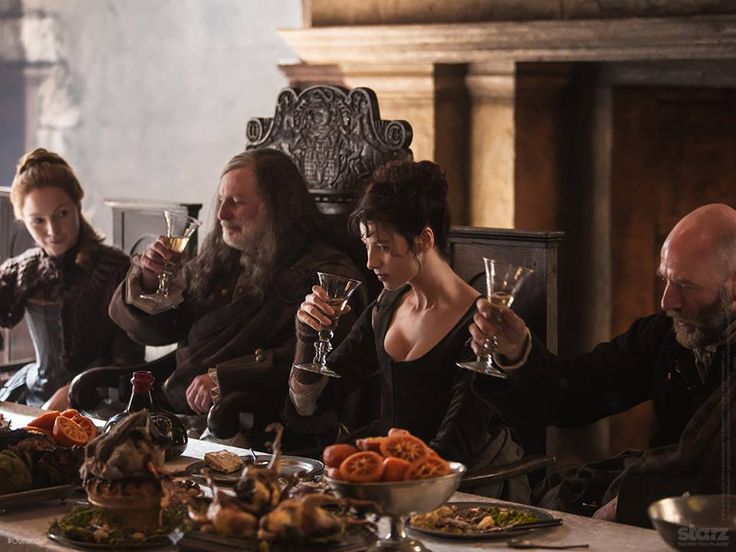 Colum is clearly an acts of service kind of guy, followed probably by words of affirmation. We see that in everything from the annual fealty oaths the clan members must give to his anger when he feels as if people who matter to him haven’t done the right thing. Remember his rage when he discovered Dougal was collecting money for the Jacobite Rebellion behind his back? Or Colum’s anger when he discovered Jamie had married a Sassenach, undermining his plan (at least initially) to have Jamie take over the clan until Hamish was of age?

Letitia is a bit more of an unknown. She and Colum seem to have a good working relationship. She certainly gets the need to show him acts of devotion. I mean she has sex with his brother so that Colum will have the heir he needs for clan stability. But what makes her tick emotionally? I’m going with acts of devotion as her primary, with maybe words of affirmation as her secondary. 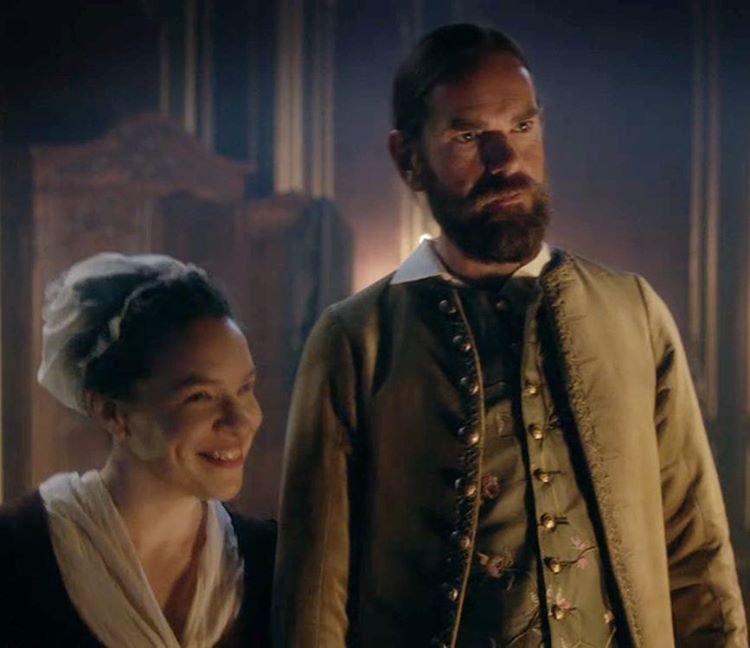 Murtagh is clearly an acts of devotion man. The list of how he shows love — from killing a boar with a knife for the woman he loved to his many acts for Jamie — is long and impressive. He’s also a man of few (but often so on-target) words, so he’s definitely not a words of affirmation person. Instead Murtagh’s secondary love language is quality time. His entire life is devoted to helping and being with Jamie. With Suzette, he seems to value being with her whenever he can. In that conversation with Claire after she discovers the two of them in bed, he leaves to go spend time with Suzette.

Suzette is, like Letitia, a bit of a mystery. She is a servant who literally makes a living through acts of service. But that’s not love. Instead, I think physical touch is her primary love language — and not just because she and Murtagh start their relationship by tumbling into bed. She fusses with him when he’s dressing for the robbery, and pecks him on the cheek and affectionately touches him whenever they meet up. Touching matters to her.

Alex is clearly all about acts of devotion. He watches over Mary after she has been raped, and, in what has to be that act of devotion to beat all acts of devotion, he ensures that she and their unborn child will be protected by his brother’s fortune and place in society after he is dead by arranging Mary’s marriage to Jack Randall.

For Mary, words of affirmation seems to be her primary love language. Their relationship begins with talking and is built on talking and writing to each other. “He supports me,” she tells Claire defiantly when they accidentally meet up in the apothecary’s shop. Their love is seeded by words, by Mary feeling that she has finally — literally — found someone she can talk to. Her secondary love language is acts of devotion, which is one reason she and Alex likely work so well together in their short relationship. She works at L’Hopital des Anges, and bamboozles her family so she can secretly take care of Alex. To pay for medicine, she pawns her jewelry. 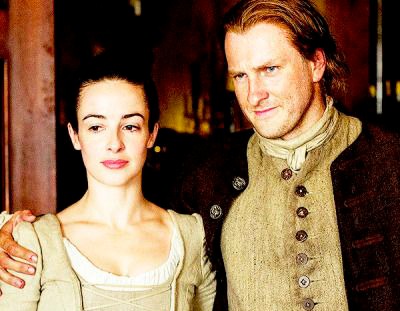 Like the other Outlander men, Ian’s primary love language is acts of devotion. He and Jamie got whipped together as young boys and fought side by side in France. No wonder he responds so deeply to Jenny’s refusal to let him die when his leg is amputated. She is speaking his love language loud and clear. That’s because Jenny, too, shows love through her actions. She puts her body on the line when her brother is whipped by Black Jack Randall. She gets on a horse hours after giving birth (!) and throws herself in front of a British soldier’s horse and brands said soldier during her mission to save Jamie when he’s on his way to Wentworth Prison. Both Jenny and Ian manage Lallybroch on their own during extremely trying times, with no idea of where Jamie is or when/if he will ever return. And yet when the Laird does return, they step back, ready to assume their secondary place in castle life. 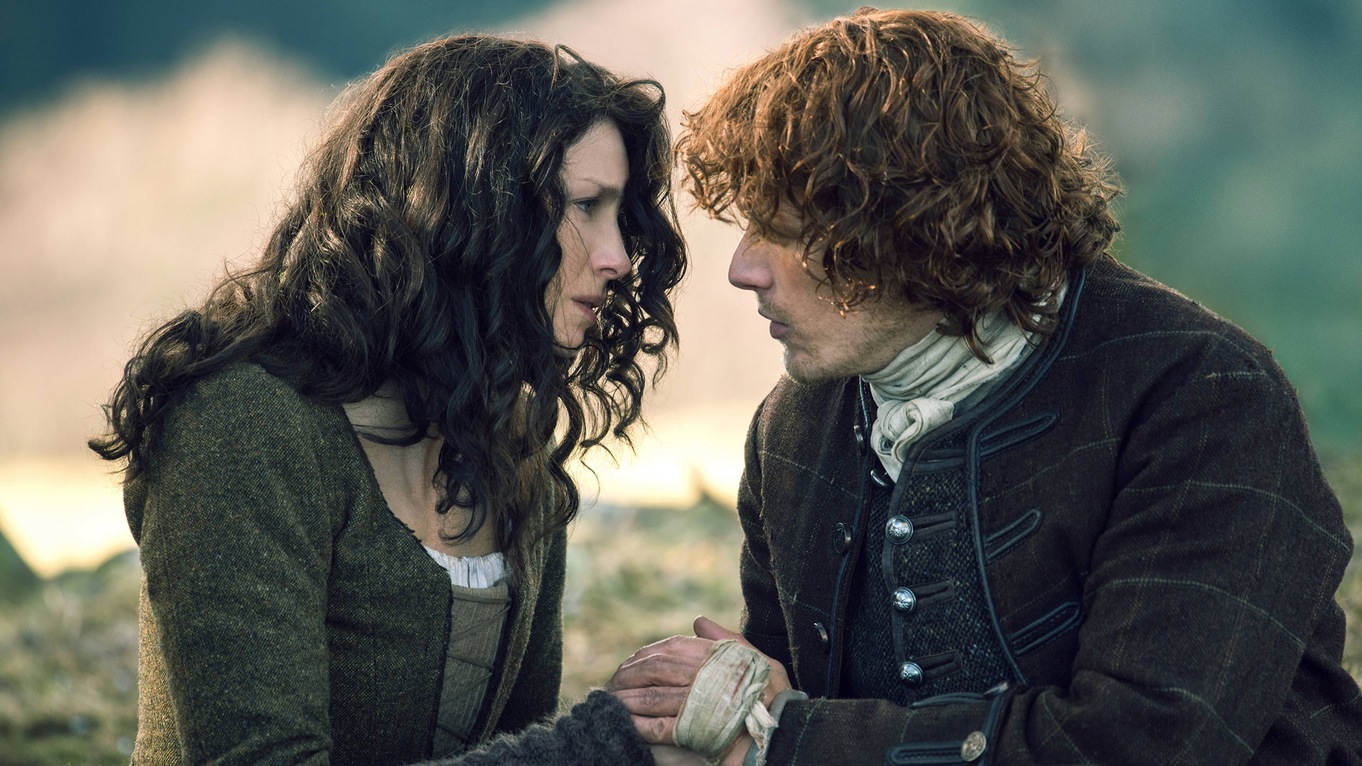 Like Ian and Jenny, Jamie and Claire speak the same love language — in spades. And it is because of this that they unite so strongly and give each other — for the most part — what they need. In that sense, they are the perfect match. While the marriage might have been arranged and a question of convenience initially, that Jamie and Claire speak as one is clear almost from their wedding night.

Both of them show love through acts of devotion, with physical touch as their secondary. Claire literally lives her love language as a healer, constantly reaching out to help others. Her acts of devotion toward Jamie start before she even realizes it, as she helps reset his dislocated collarbone. He holds her on that horse, covering her in his plaid and offering her a dram of whisky.

Their love literally allows them to save each other repeatedly. In “The Reckoning,” Jamie takes on BJR with nothing more than an unloaded pistol and his bare hands. In “The Devil’s Mark,” he takes on an entire mob. Claire braves Wentworth Prison to save Jamie and later in the abbey literally goes with him into the depths of his tortured soul to pull him back to life and love after he is raped and tortured by BJR. In season 2, Claire has sex with the king and along the way ends up murdering the Comte to redeem their relationship, while Jamie offers — for the second time — the ultimate of devotion: He sends Claire — this time successfully — back to safety through the stones.

In some ways, physical touch is simply a variation on an act of devotion, an extension if you will, as you give yourself to another and provide loving touches that you believe your partner will enjoy. It’s not surprising, then, that Jamie and Claire unite here, too. Just how closely the two are aligned is clear almost from their first kiss. “Does it ever stop? The wanting you?” Jamie asks early in their relationship? The answer, then and in the books, is notably no. In season 2, it’s worth noting that Jamie and Claire spend much of the season at odds until they return home to Scotland. Season 2 also featured virtually no sex and little intimacy between them. Just further proof of how things can go awry when a couple is not being true to their love needs.

Compiling this list of Outlander couples and the five love languages, it was interesting to see how strongly acts of service/devotion were, in general and to the most satisfied couples, particularly. Is this selfless behavior the “best” love language for showing love? Or was it simply more common in a time when people’s — especially men’s — behavior and mores were so clearly based on what people did? You supported the Jacobites or you didn’t. You supported your laird or you didn’t. Are certain love languages more prevalent in certain times?

I don’t have the answer, but I do know this. The course of true love may not run smooth, but if you speak the same language, you can figure out how to get back on track.

Are you a Five Love Languages fan? What do you think of the traits we assigned our couples? Do you have theories about the love languages of some other Outlander couples coming our way?