I desperately wanted to LOVE Outlander season two, but …

I was as frantic for the finale of Outlander Season 2 as the next Obsessenach. How would they tie up the multiple loose ends? Would this 90-minute episode give us the conclusion we need to survive the always-interminable #Droughtlander? Most important of all, would the finale make me (and other fans I’ve been chatting with about this) fall back in love with Outlander the TV show in that starry-eyed, absurdly goo-goo way that we still feel about Season 1?

The short answer is no. Yes, the finale was amazing and in many ways the episode we’d all been hoping for. But the reality is that one episode (or even a few) does not a stellar season make, and while impressive in many ways, Outlander Season 2 overall just was not as good as Season 1. Outlander Season 2 suffered from a sophomore slump.

Now, before the hate mail starts coming, let me be clear: I STILL LOVE OUTLANDER in a way that has my husband and family scratching their collective heads wondering where their real spouse/mother went. I am not a fangirl kind of woman, but I fell hard for Outlander and haven’t looked back. Despite not having loved Season 2, I will still rewatch it obsessively, will likely re-read both Voyager and Drums of Autumn — again! you know, for “research” — and I spend more time on Twitter and Tumblr checking all things Outlander than even I think is healthy.

I ALSO LOVED THE FINALE. Absolutely stunningly acted by Caitriona Balfe (is there an actress more luminous in emotional range?), Sam Heughan, Graham McTavish, Duncan Lacroix and the rest of the stellar cast, “Dragonfly in Amber,” was, with a few quibbles, the episode we’d all been waiting for. Gut-wrenching emotion, well-paced, with — literally — a ray of hope at the ending.

So, mark me, I was so ready for this season to continue to blow my TV mind. I was primed for all the feels, all the time.

And maybe that’s part of the problem. I was expecting too much. Because when all is said and done, Season 2 wasn’t quite enough to make me fall in love again. We got handed the flowers and chocolates and promises to change, but the reality is that the season overall was erratic and that, my friends, is sophomore slump in a nutshell.
Named aptly for sophomores in high school or university (the teachers here are nodding their heads up and down), a sophomore slump refers to the second effort after an amazing debut. Originally coined to describe students, it’s expanded to include athletes who had a banner first year followed by a less distinctive second season, singers/bands who produce a so-so second album after a bang-up first one, novelists who slide after their first amazing book, and, yes, TV shows whose second seasons are just not as good. Sound familiar?

But before we get into what went wrong, let’s start with what worked in Season 2: 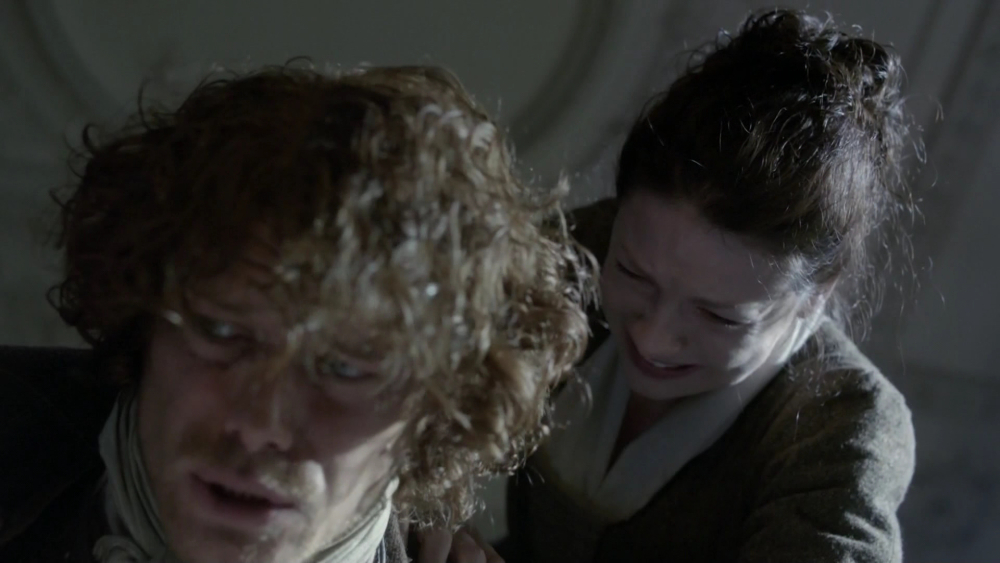 The acting: So many fine moments in this season. Heughan’s portrayal of Jamie as a broken man who crawls his way back to health and sanity to become a leader of men; Balfe’s broken emotional portrayal of a woman who loses her child and her man, before clawing every inch of the way to try to stop impending disaster for Jamie and people she loves; Tobias Menzies, starting with that one breathtaking ten-second moment in the first episode when he is told Claire is pregnant followed by plenty of others when he plays his evil twin BJR; Graham McTavish at his brother’s death bed, and so on. The list is long and full of wonderful acting – Master Raymond, the Comte St. Germain, Fergus, Murtagh (so fun to see him have more of a role in the TV version). I don’t get why none of them got Emmy nods but I’ll add that to the list of things I find confusing about Hollywood in general.

The sets: As well deserved, Jon Gary Steele got an Emmy nomination for his work this season. The man is a genius. And unlike say, Game of Thrones, which has a gazillion dollar budget and uses a lot of CGI, Steele makes sets that actually exist in real life. They are places people actually sit down and walk through rather than gesture against a green screen. A few of what could be many examples: 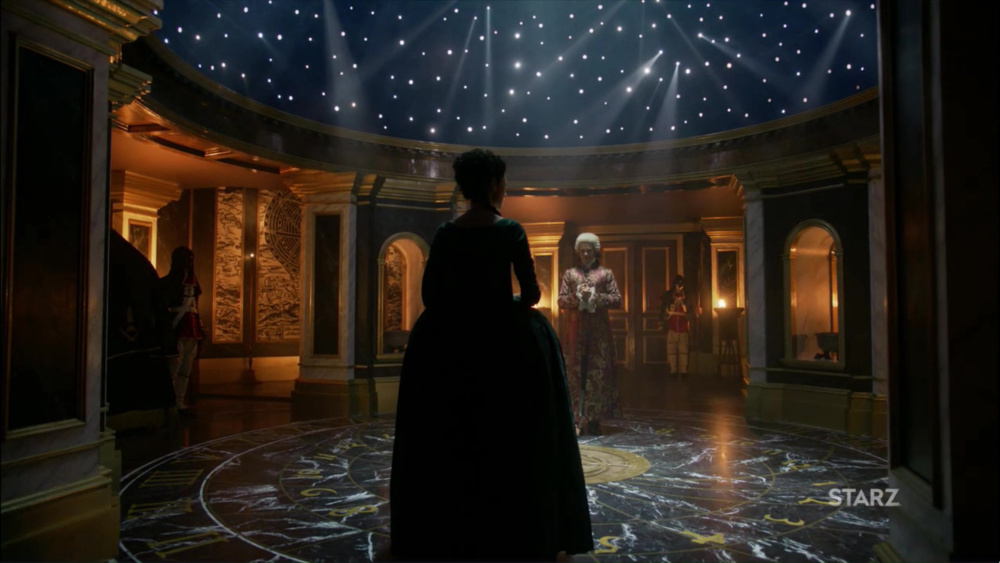 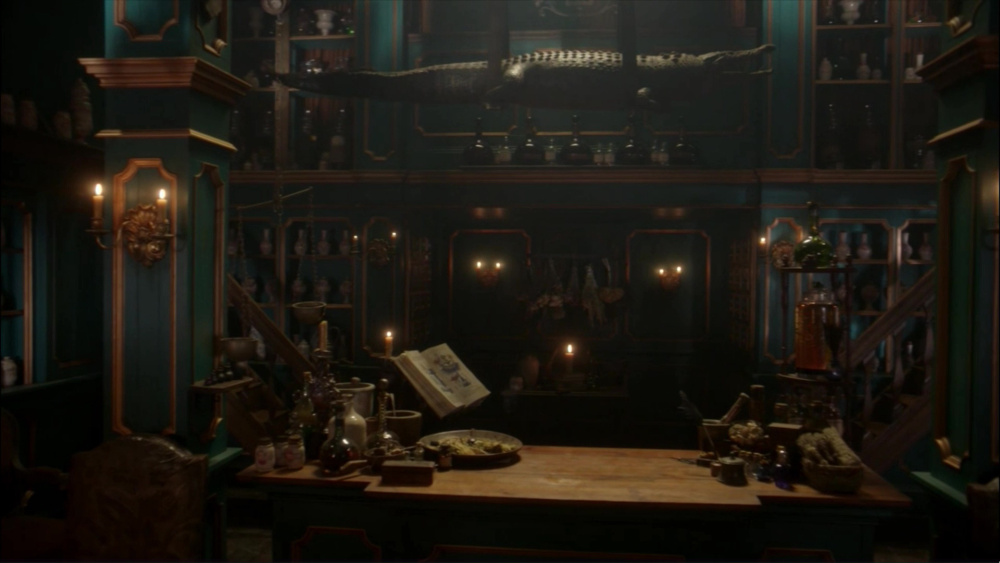 The costumes: Terry Dresbach also got her deserved due from the Emmy folks this week with a nomination for outstanding costume design. Her costumes are their own characters and they did so much to make Paris and its intrigue come to life, followed by a sense of homecoming when everyone traveled back to Scotland. I give this season an A-plus for costumes — and I’m not even that much into clothes. 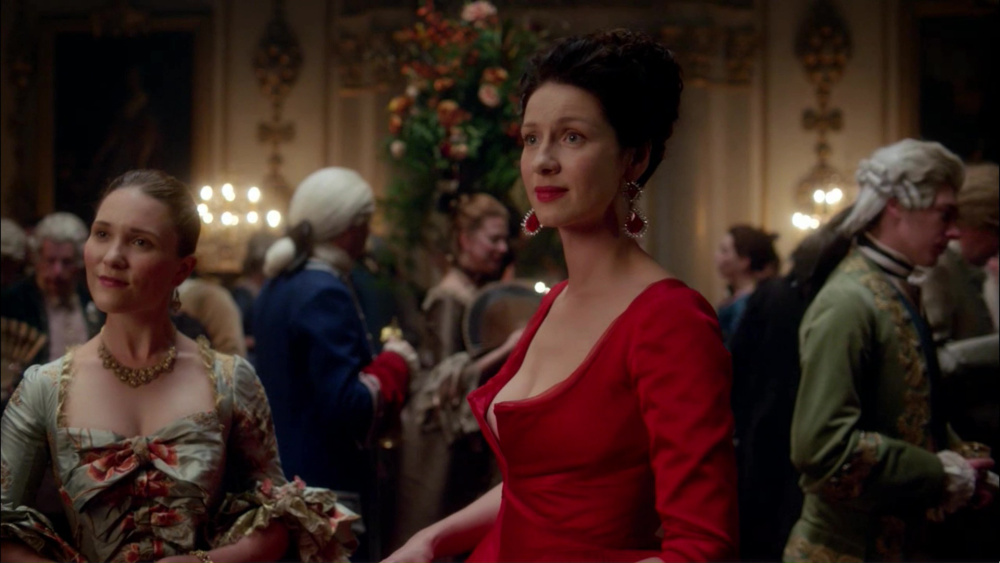 All these accolades aside, it was clear early in the season that all was not quite right in Outlander world. Admittedly Dragonfly in Amber was a more complicated book to make into episodic TV — even Ron D. Moore has lamented this fact. A lot needed to be explained, not the least of which was helping people who haven’t read the books understand a – literally – very complicated time line.

But the show seemed like it was on speed almost from the beginning. The pacing was off. Just about any time a moment of emotion occurred — notable exception was the “Faith” episode — we were sent racing on to the next event/intrigue/action twist before we could actually savor what just happened. Take the finale, for instance, after Jamie has killed Dougal with Claire’s help. Yes, the Culloden clock is ticking but couldn’t we have had five more seconds on Jamie’s and Claire’s faces as the full horror sets in? I was still gasping when we were onto the next scene!

And while I do not expect the show to follow every single detail that’s outlined in the books, I do feel some of the changes/choices that were made were made at the expense of what really makes Outlander tick. I mean, did we really need to see one second of Laoghaire this season?

I’m referring, of course, to Jamie and Claire and their relationship. This is where the tall ship got off course in Season 2, the way in which the pacing and plot choices really hurt the core of Outlander. For whatever reason — perhaps, excited by the intrigue and politics and opportunity for some swashbuckling battlefield scenes — the writers and producers erred on the side of adventure in Season 2. And in doing that, they lost sight of this central fact of the Outlander series: Outlander is not an adventure story with a love story thrown in for good measure. Outlander, beyond all else, is an epic love story in which adventures and escapades take place with and around the main couple, Jamie and Claire. Let me say that again for emphasis: Outlander is a LOVE STORY.

Yes, Jamie and Claire appeared in a lot of the episodes, but the connection and the importance of their relationship — to each other, to those around them, to the story itself — was muted this season. (And, no, I don’t just mean the lack of sex and intimacy, although if you missed the post on that, here it is.)

As a result, the center did not hold in Season 2, and that left it wanting in a certain group of the fandom. Here’s hoping the producers embrace the real reason this series is so beloved. Otherwise, I worry that Outlander the TV show, decidedly unlike Outlander the book series, will be a one-season wonder. And that would put all of us in a serious slump indeed.

What did you think of Season 2? Did you like it more or less than Season 1?
What are your hopes for Season 3?