World Outlander Day came a bit early to Falkland, in the Kingdom of Fife, Scotland.

I’d been in Scotland exactly a week to the day, the first week of my ‘gap year’ … my relocation from Australia to Scotland, with Outlandish adventures in mind. What better way to finish a week battling jet lag and bureaucracy than to spend it with my new BFFs, Morag and Sandy, in the heart of Outlander country.

Morag Wright and I are Outlander Cast Clan Gathering members and NewGlasgowGirls, and although we know each other well online from across the world, this was our first real meet-up. She and her husband, Sandy, have been showing me some real Scottish hospitality. Nothing seems to be too much trouble as they help me navigate my way in a new land, and they are lots of fun, to boot.

We agreed to meet for world Outlander Day in Falkland, which is a most beautiful historic village in the Kingdom of Fife, about 45 minutes drive from Edinburgh. The town was used extensively in Seasons 1 and 2, and this was a day for Outlander fans to get lots of good feels. And, as a bonus, the sun was shining! 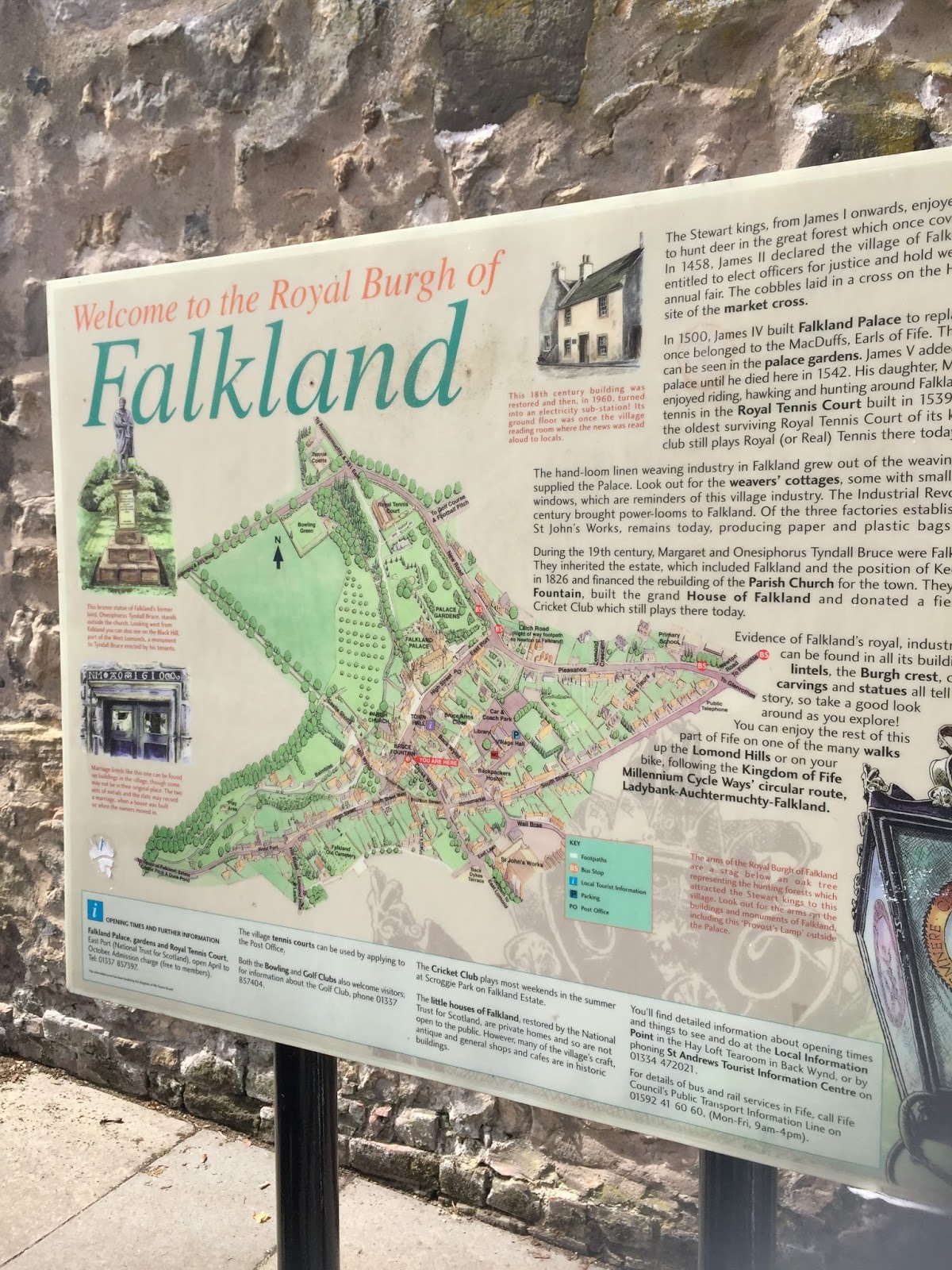 There were tours, displays and plenty of atmosphere. The town was humming with Outlander devotees …. some in Highland dress, some sporting ‘Je Suis Prest’ t-shirts and some, like us, just disguised as ordinary people! 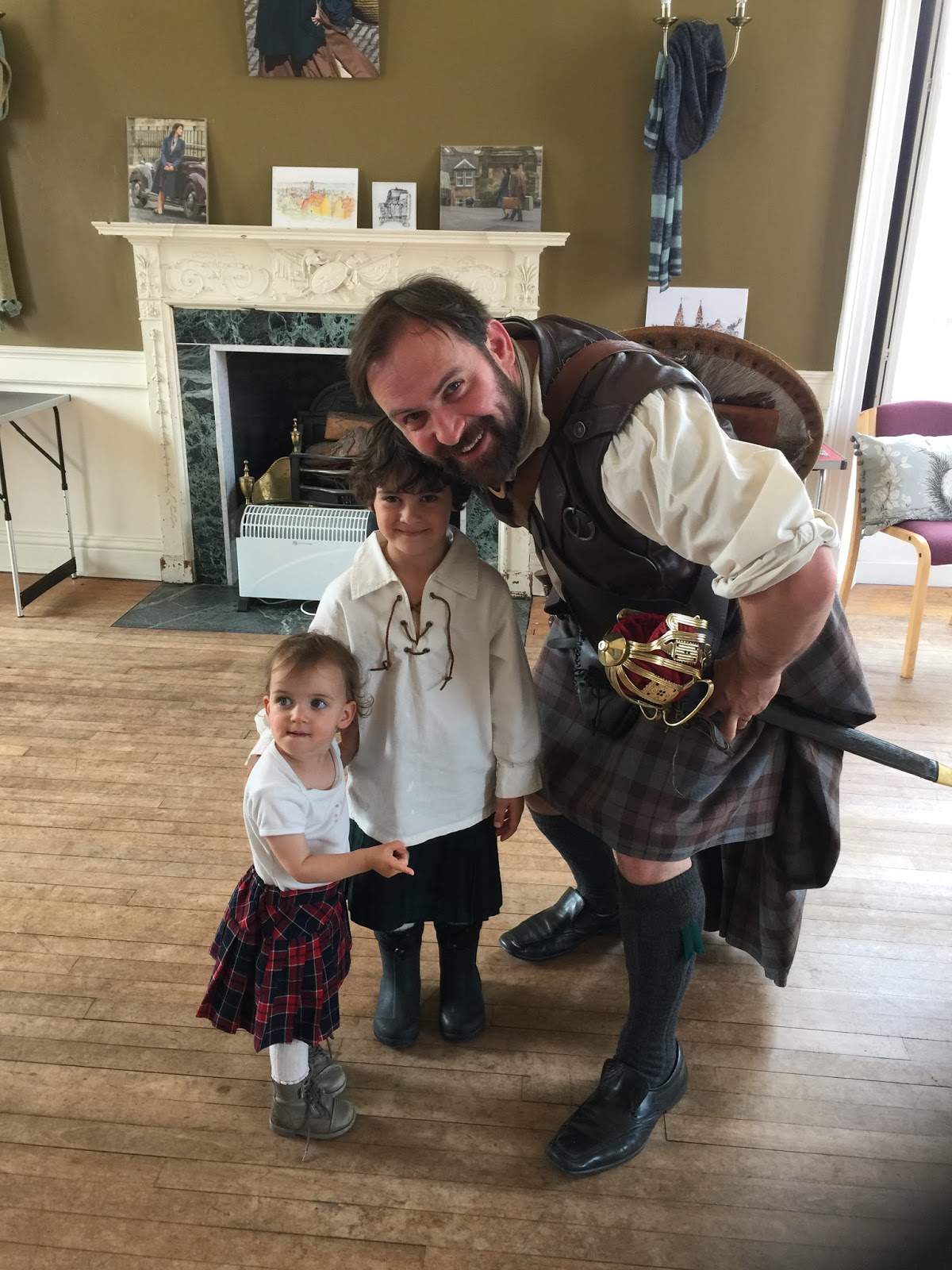 Morag and I had kind of forgotten just how many Season 2 scenes were filmed there, in the ‘Inverness’ of the 1960s. We all remember the 1940s scenes – Mrs Baird’s, the ‘blue vase’ shop, etc. from Season 1. But remember, Clare goes back to Inverness in Season 2, she hunts for the Deed of Sassine, and we hadn’t realised that the Inverness scenes with Claire, Black Jack and Murtagh, just before Alex dies, were also shot in Falkland. 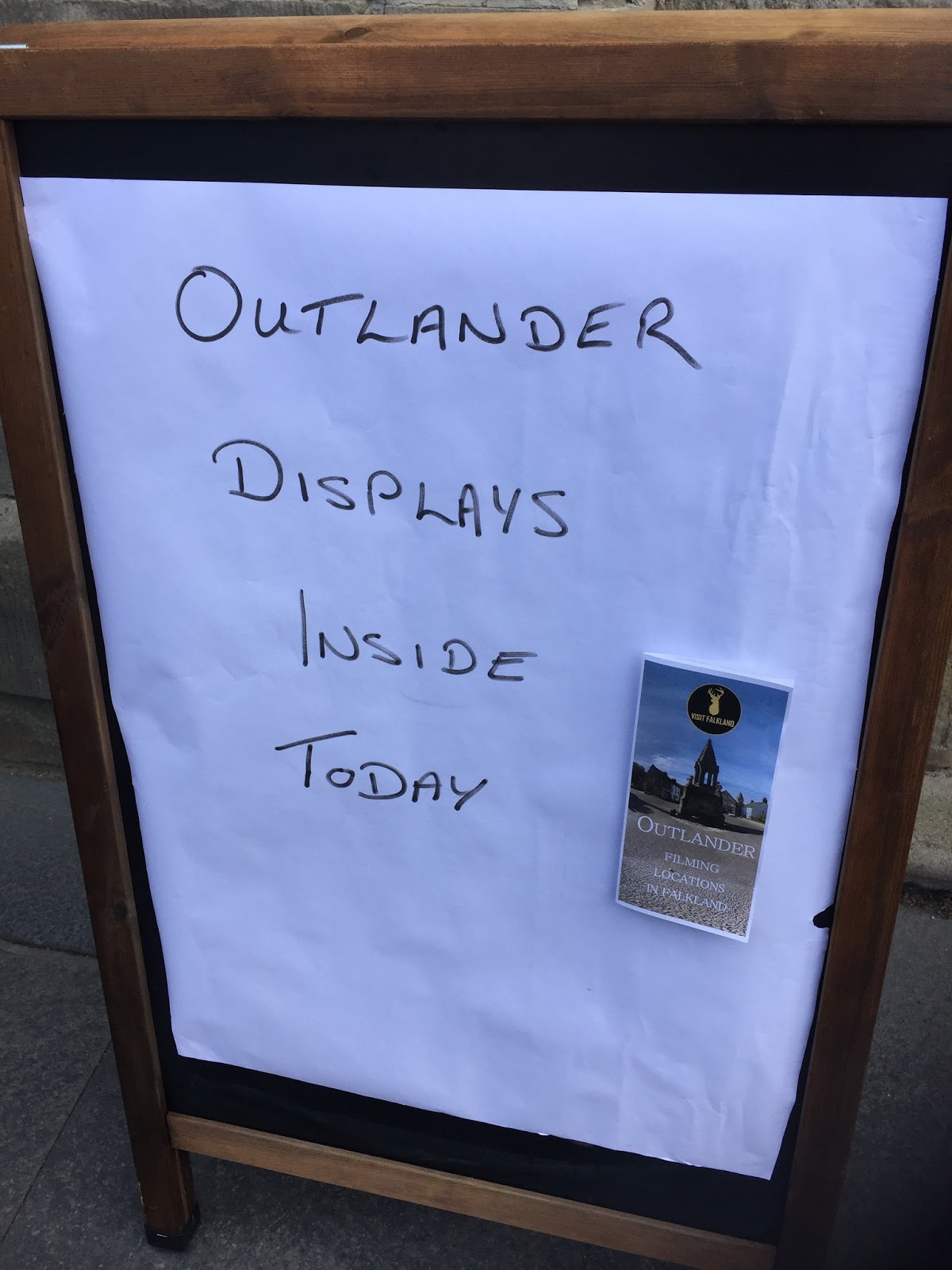 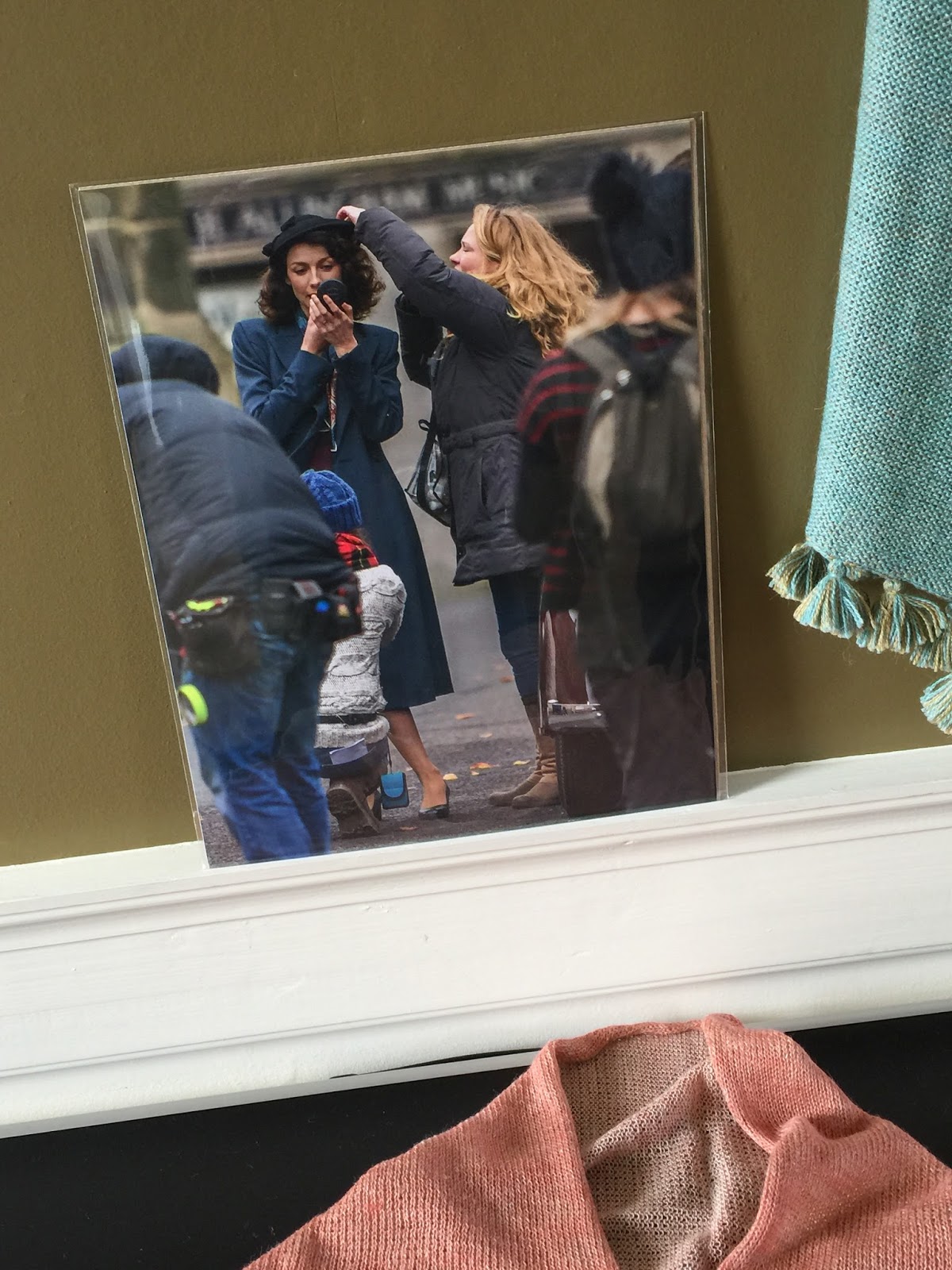 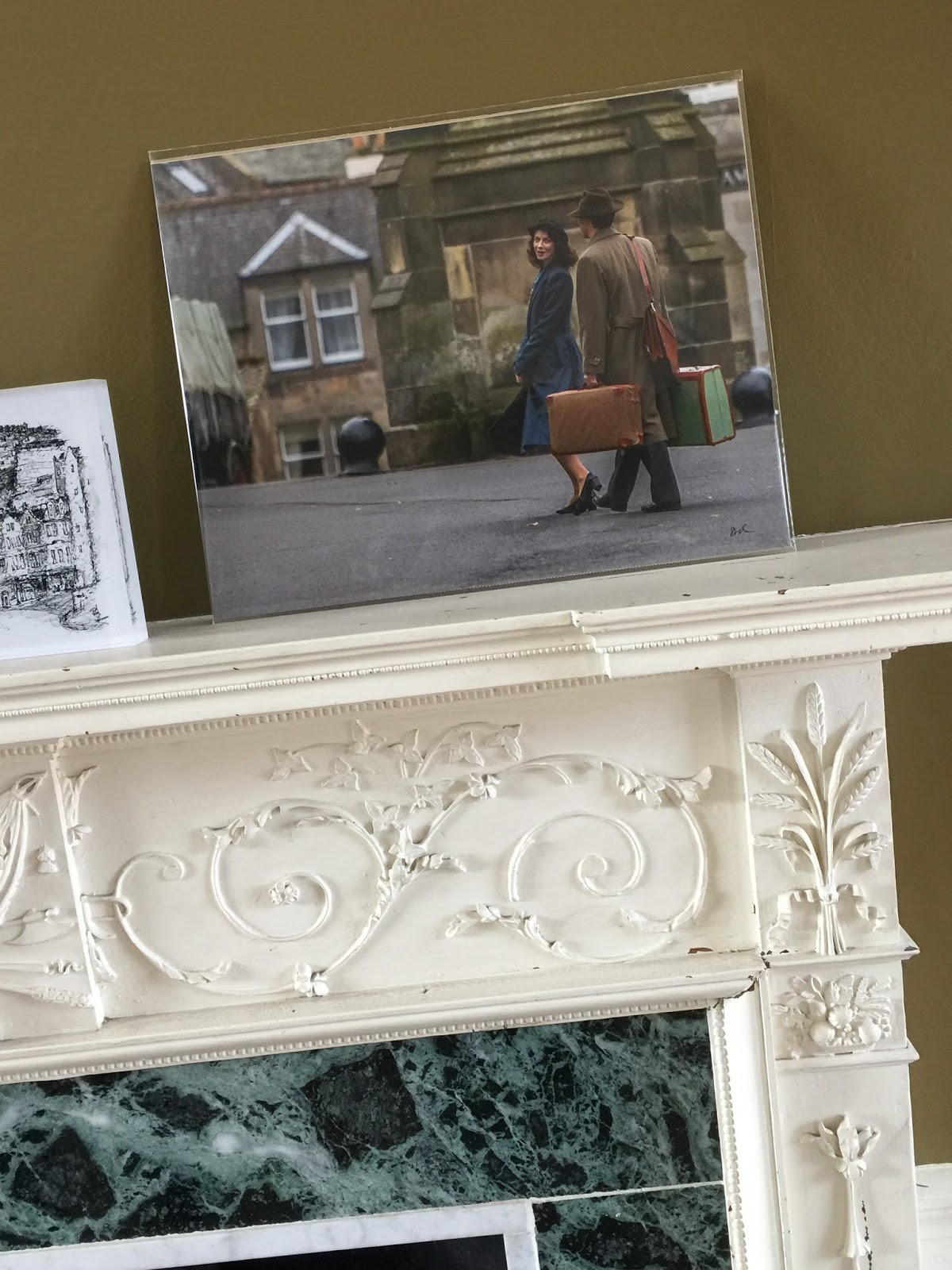 The display was set in the town hall. Who knew that this room, on the first floor, was the room set up as the office/library where Claire went to get the Deed of Sassine and to inquire about Roger’s genealogy. We heard that so many books were taken up into that room that they had to put struts up to the ceiling on the ground floor to make sure that it didn’t cave in! 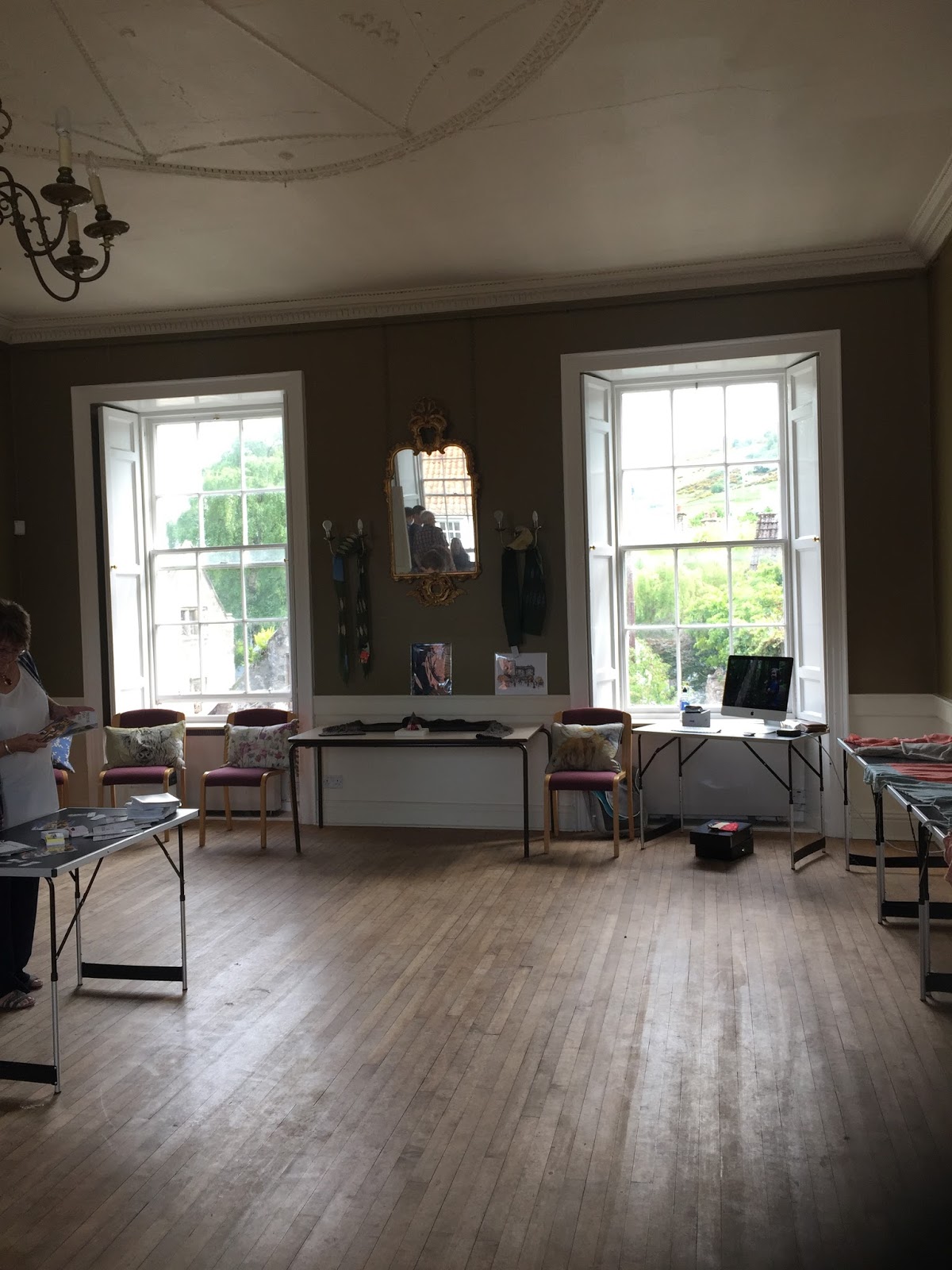 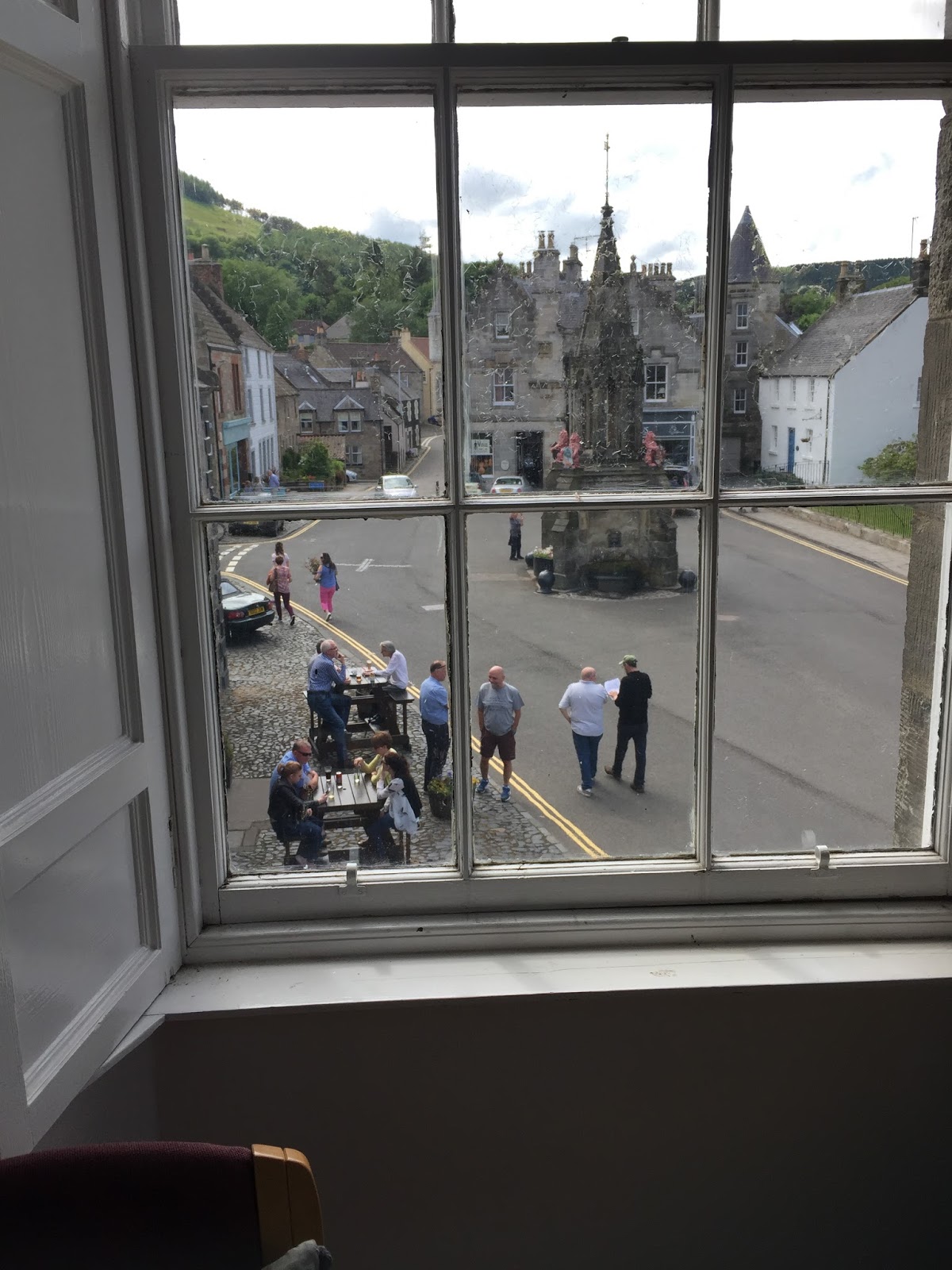 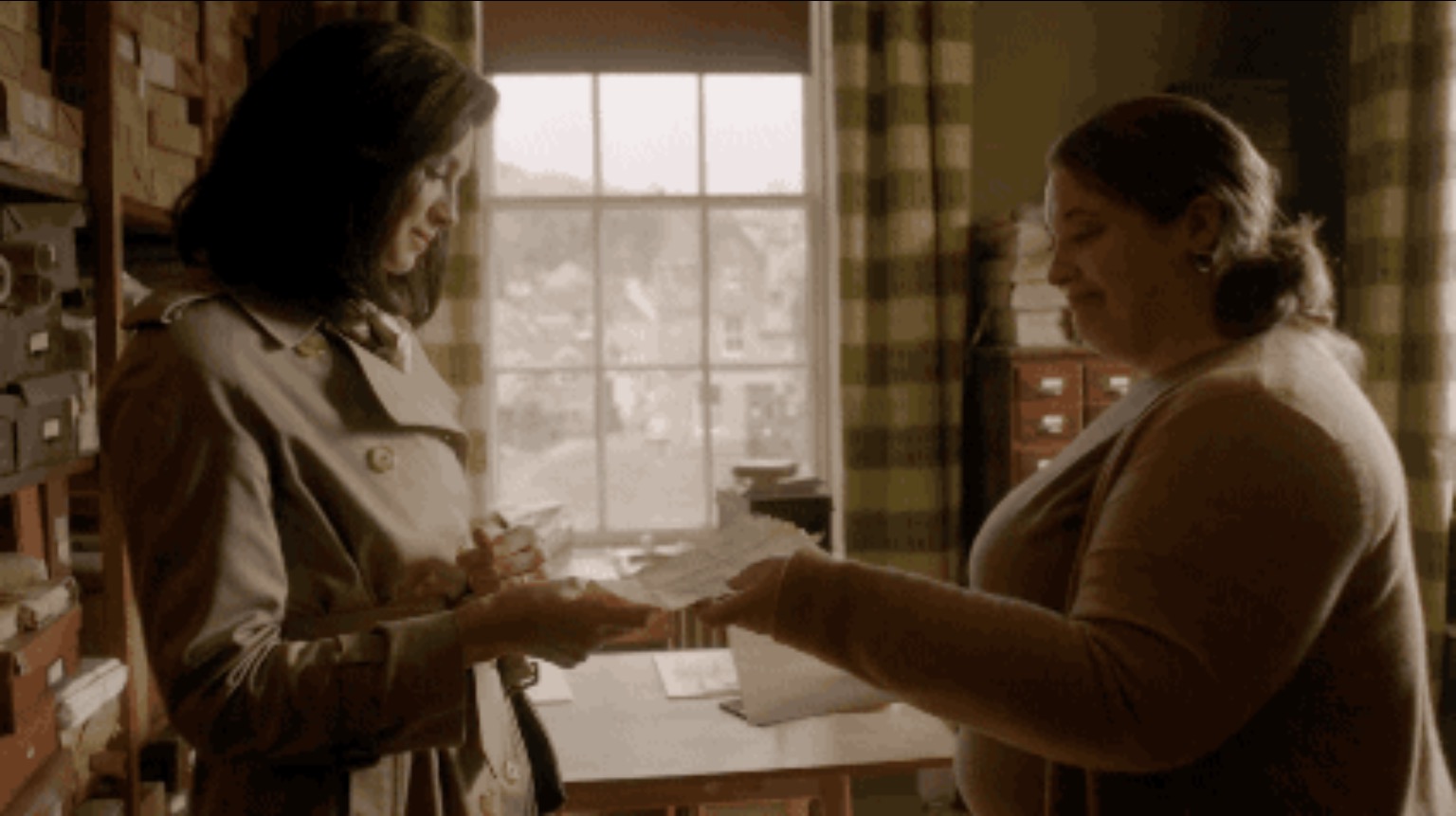 The Outlander tour was a hoot. There were two leaders, Tom and Kenneth.  Tom was a local historian – he even confessed at the start that he has not watched Outlander and, at this, received howls of good-humored derision from the assembled throng! Kenneth, on the other hand, had a voluminous Outlander running sheet with all the details of all the scenes that were done in Falkland. And yep, you’ve already guessed which guy the group paid most attention to. It was a great tour.

Even though it’s as corny as hell, we couldn’t resist asking Sandy to be the photographer and posing for some Outlander classics – where Jamie stood, looking up at Claire (Jesus H Roosevelt Christ!) and at the entrance to Mrs Baird’s. 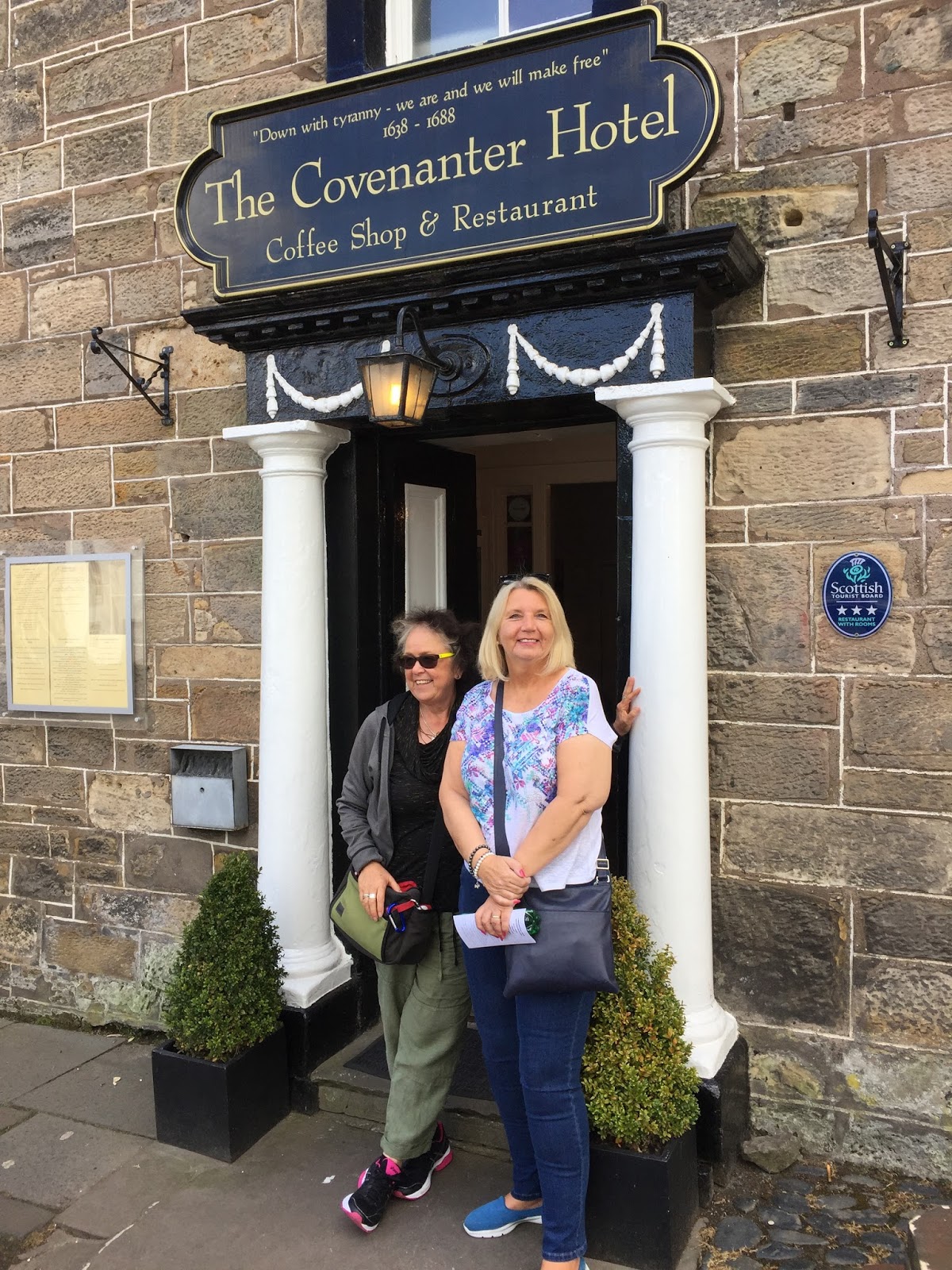 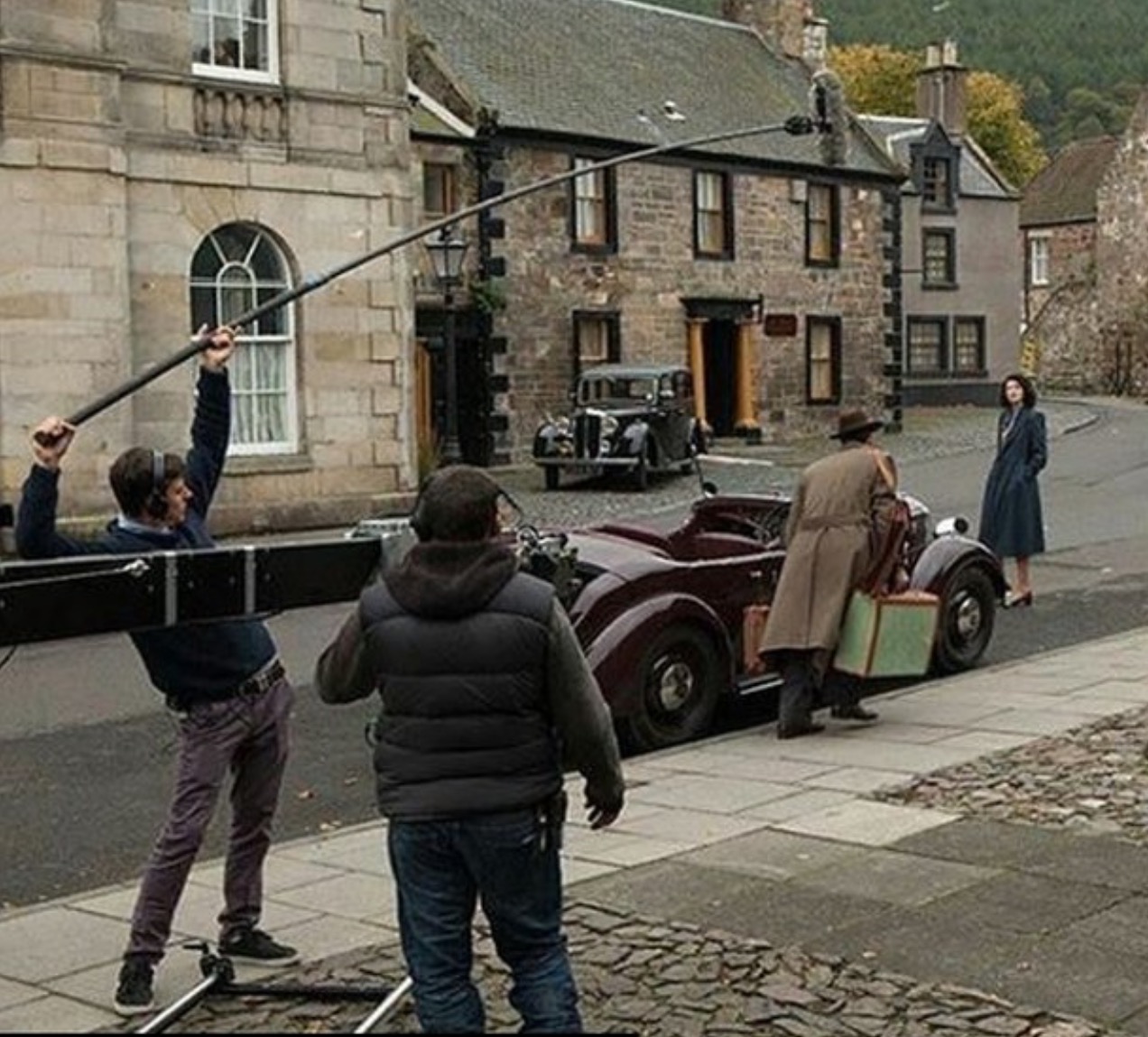 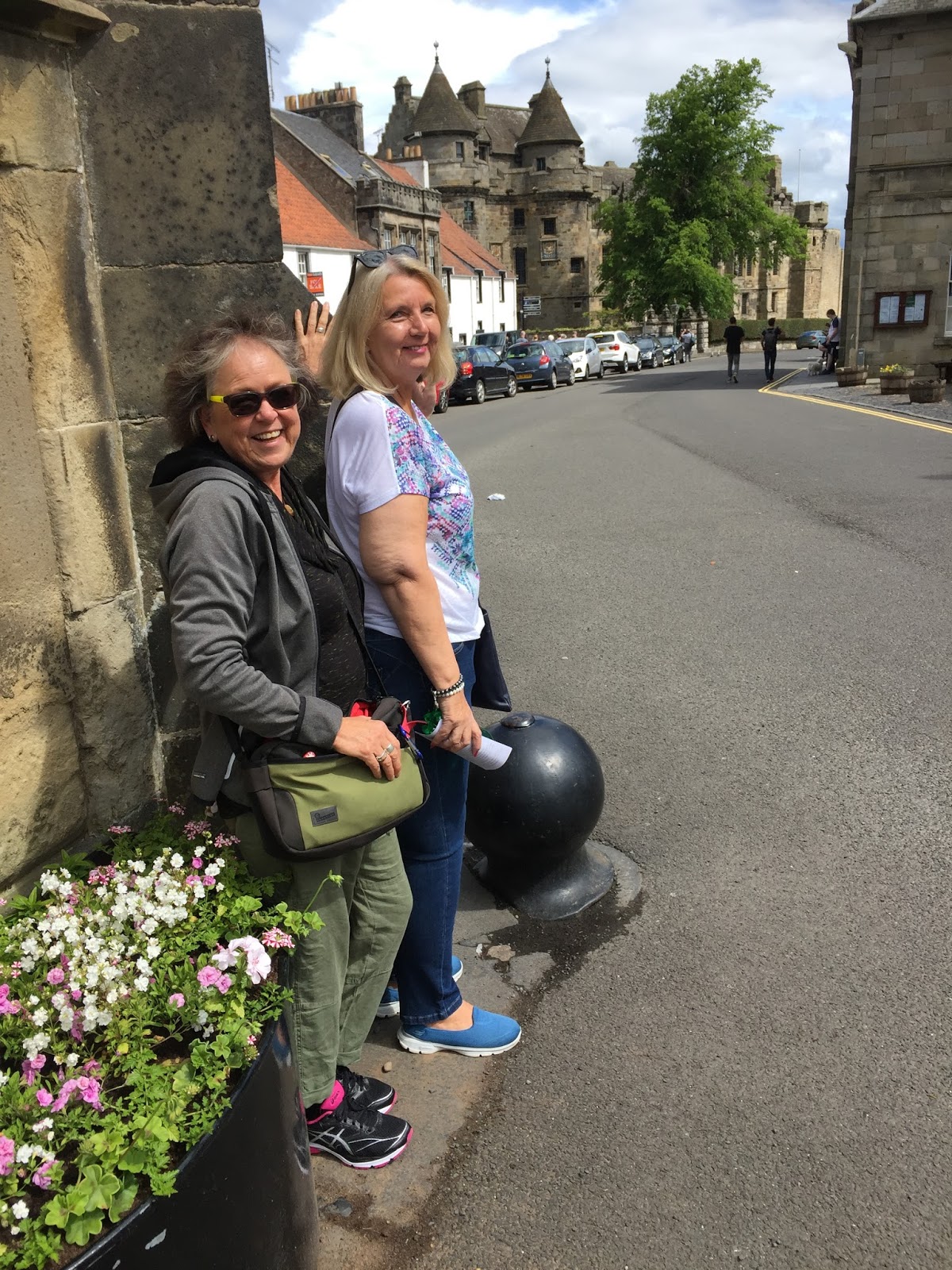 We also couldn’t resist a stop by the “blue vase shop,” which they even put in the window today for good measure. Tim (you’ll hear more about him later) said that it took all day for one expert sign writer to paint the gold-leaf lettering on the front of the shop and after filming the next day, it was just scraped off. Talk about attention to detail. If only she had a vase, all this fuss could be avoided! 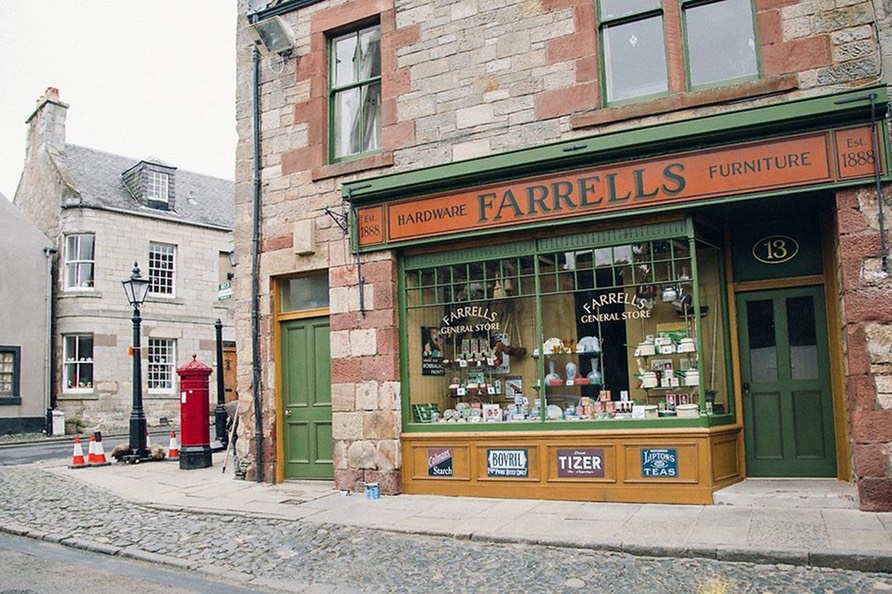 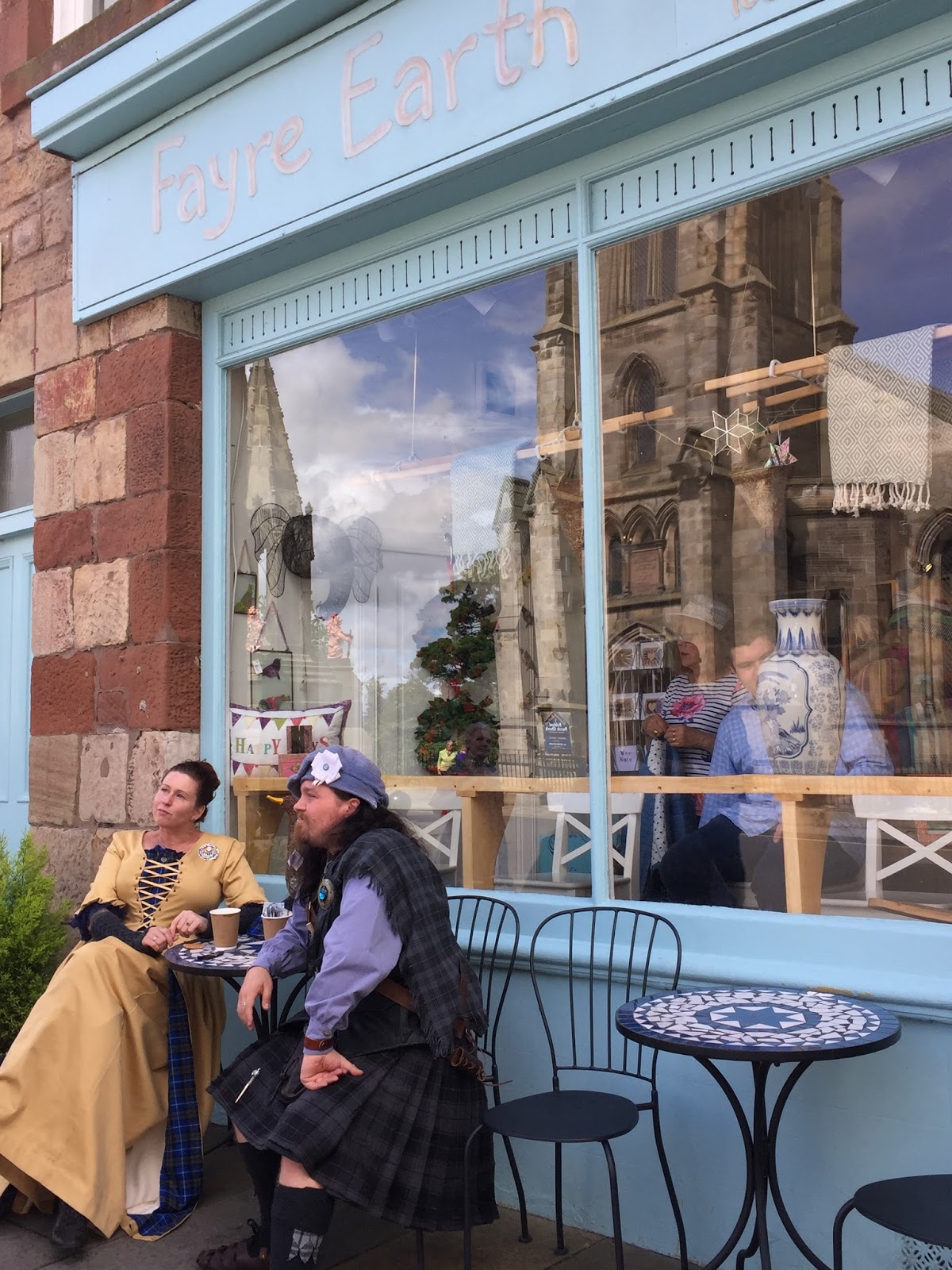 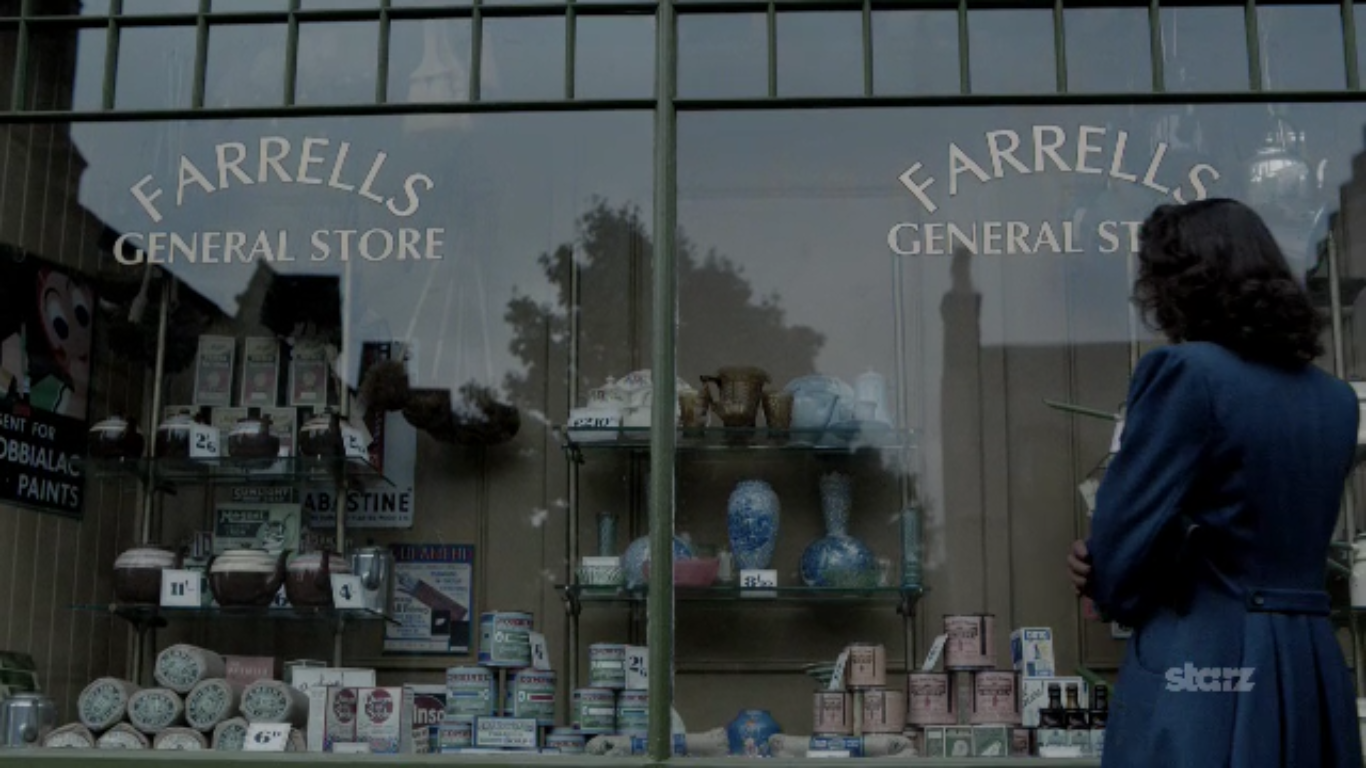 The Falkland palace was used for some external shots, but inside they also set up the apothecary, where Claire meets Mary Hawkins buying arsenic for Alex. 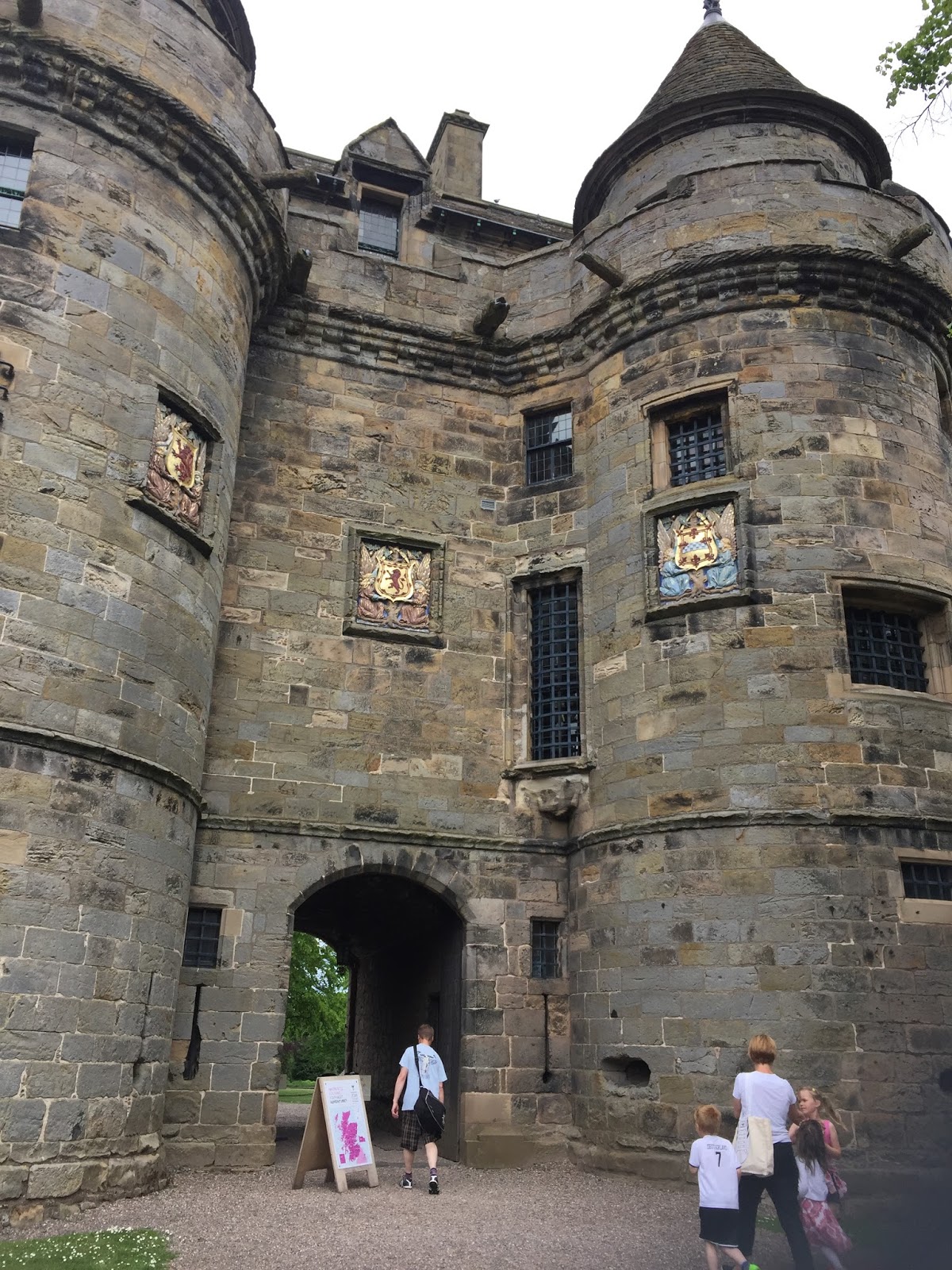 We had a lovely lunch at Campbell’s Cafe after the tour and recalled the scene with Claire in that spot. 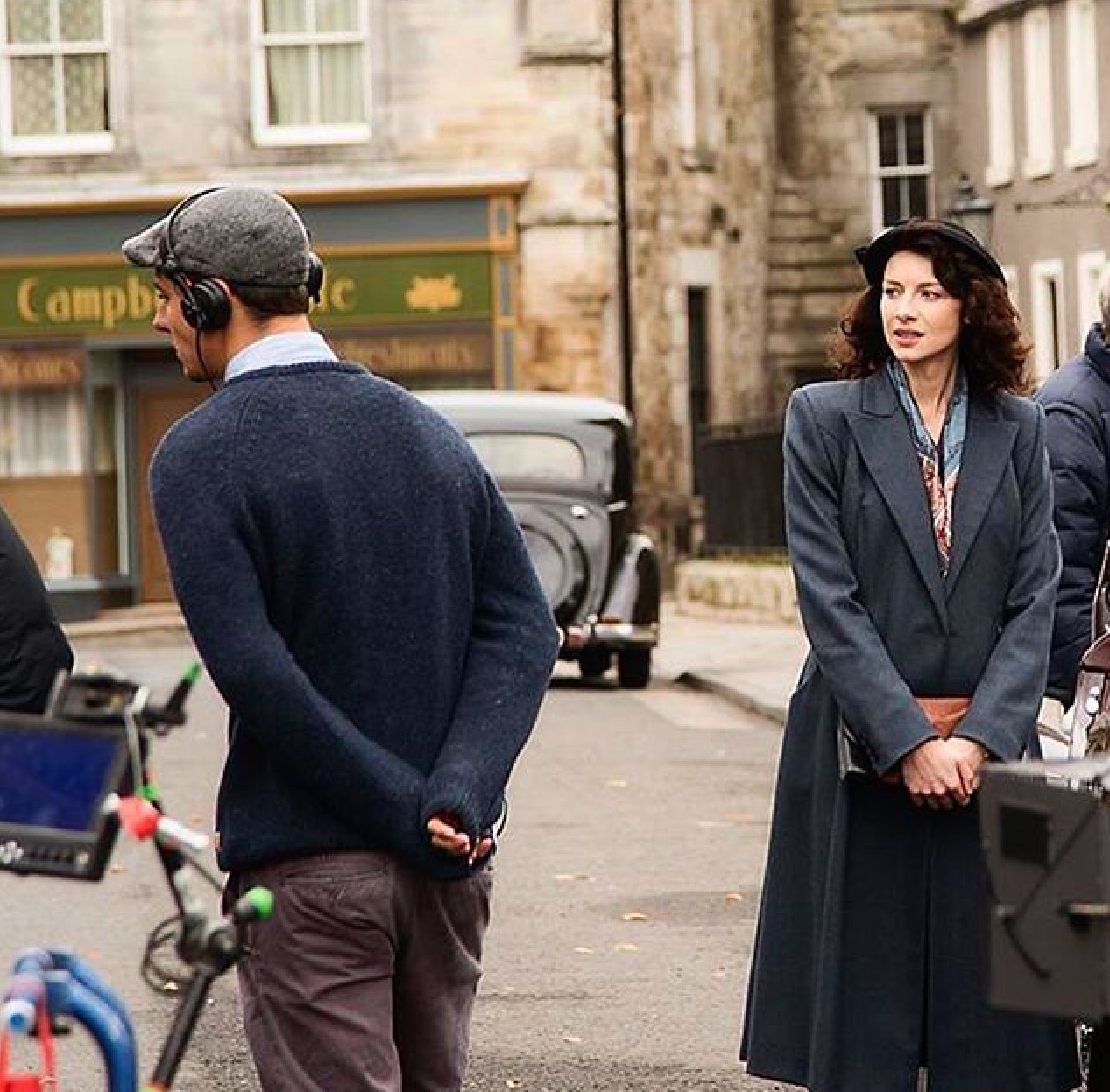 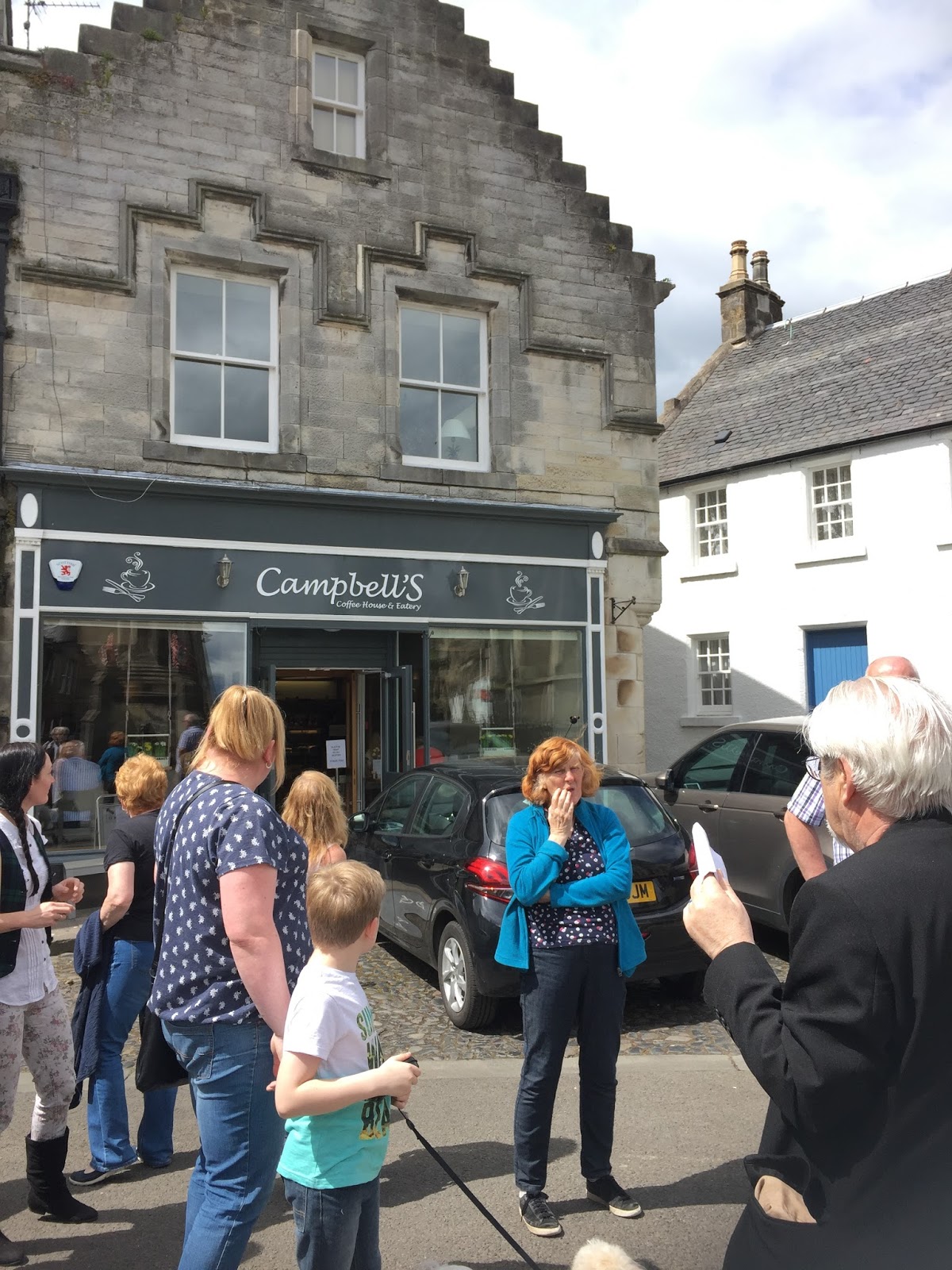 One of the most interesting local people to talk to was Tim Price, the proprietor of the Cottage Craft Centre in Sharps Close. He showed us the door that was used in the scene where Claire enters the inn to find Black Jack drunk, and tries to convince him to marry Mary Hawkins. The little streets adjoining Tim’s shop were used for these scenes and he has lots of pictures of the preparation that took place ahead of the filming. The buildings were all changed from white to the dull brown colours that would’ve been used in the 18th century. Here he is, and here are some of the pictures from his collection, with their Outlander reflections. 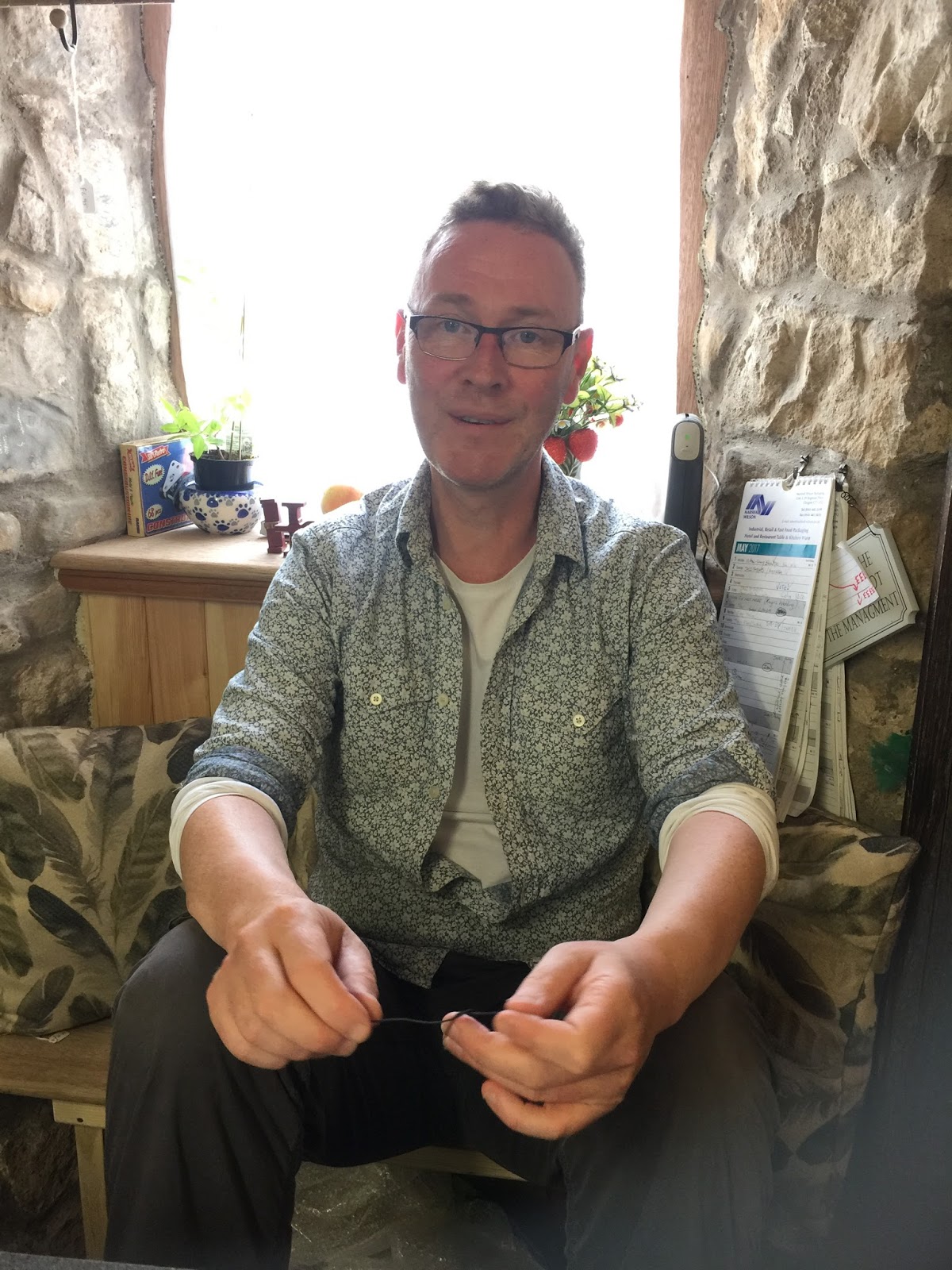 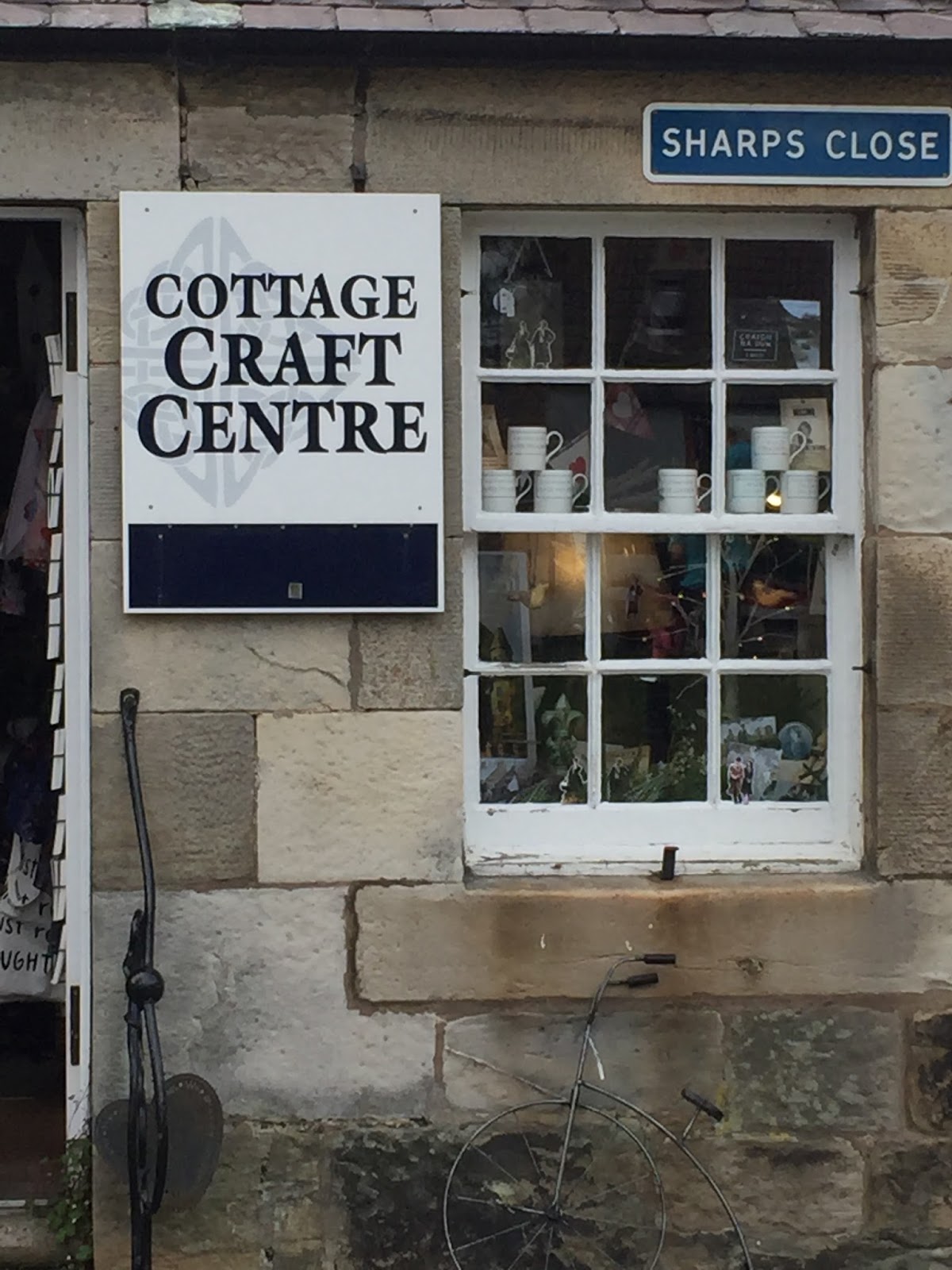 Brutnon St and Rotten Row, adjacent to Tim’s shop, were the centre of filming activities.

A wonderful day was had by all – a beautiful country drive, Scottish history, Outlander fun, good food and great company. What better way to top off my first week? Now, back to figuring out all the details of establishing myself for this ‘gap year’.
Did anyone else attend the Falkland Day? Do you have anything to add that I might have missed? Would love to hear from you in the comments below.