Is Outlander’s Sam Heughan Headed to a Bigger Screen?

As we gear up for a summer without Outlander, we’re all just *patiently* waiting for news – anything – that offers something concrete regarding a premiere date, our stars, our show. So then, imagine fans’ delight when, on World Outlander Day, we saw this headline… 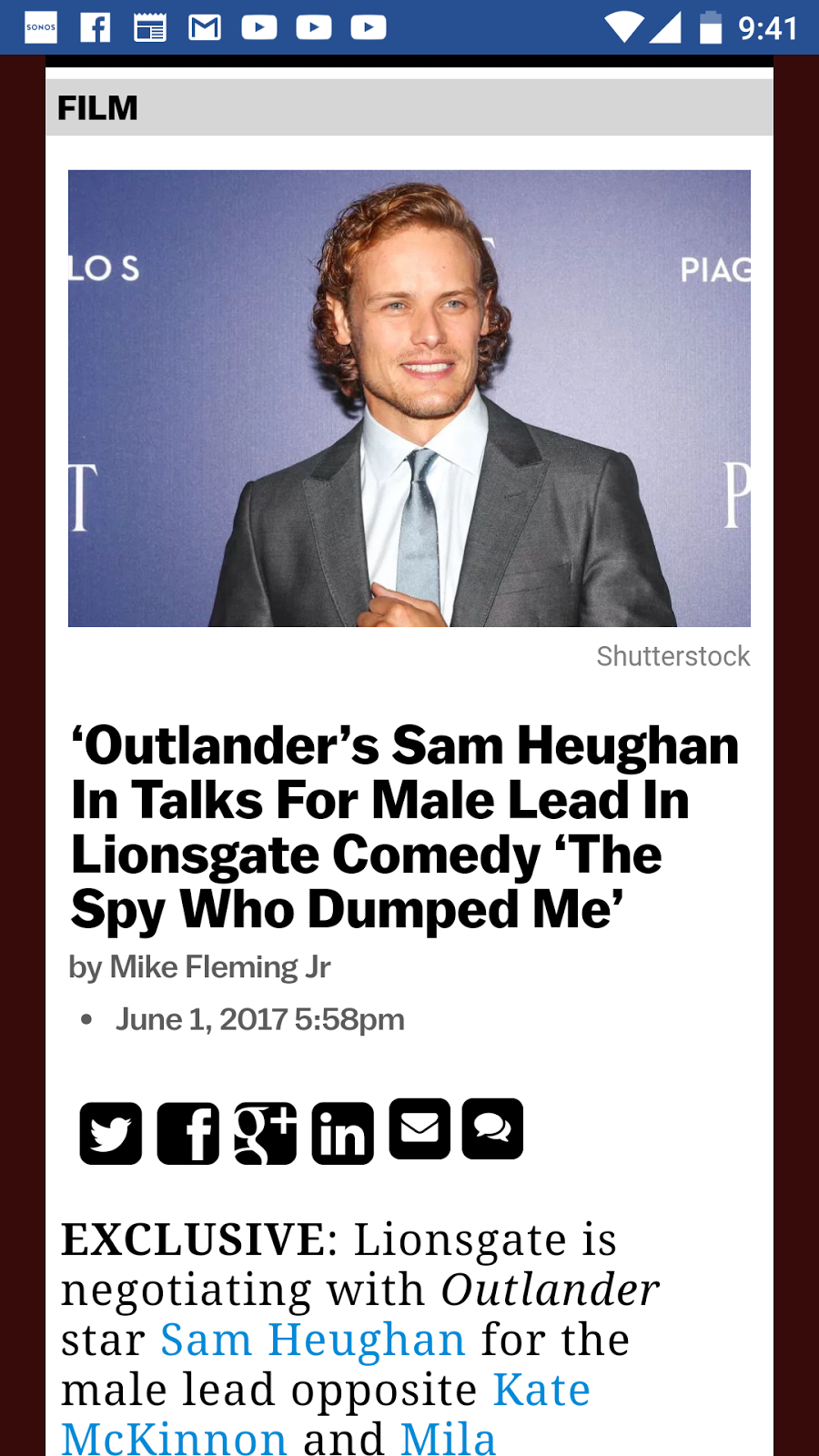 A comedy? Of course! Fans know Sam is so funny – just from his interviews alone and his overall persona, we knew he should definitely be cast in a major film comedy. Well, in a comedy beyond Adam Sigal’s fabulously written indie, When the Starlight Ends, where he first portrayed his true wittiness and charm. No doubt, this movie was his comedic calling card and helped him score the role. We still don’t know if When the Starlight Ends has a distribution deal for the big screen, but if not, then it’s direct to home viewing – whether DVD or streaming.

While enduring a droughtlander from hell, we were hoping that luck would be on the side of Outlander fans when Lionsgate bought STARZ, but we certainly didn’t know it would take this form. Sam landing a role in a film produced by Lionsgate’s most recent acquisition (it was just bought at Cannes, in May). Action-comedies, compared to romantic comedies, will be easier for Lionsgate to sell/distribute globally.

Adding to all this, it’s the comedic/action title-take on The Spy Who Loved Me, which co-starred the late former James Bond, and yes, previous co-star of Sam’s, Sir Roger Moore (a “six-degrees of” separation angle).

And truly, thank you to the producing gods for letting Sam do an action film this way and not as the actual James Bond. I know it’ll be contentious, and I’ve said it before, but I am no fan of 007’ing any of my favourite actors.

I know he looks the part (even better than the others in contention, and he is more buff than previous Bonds), and could certainly act the part, but… I care about his career – and the longevity of it. And contrary to popular thought, becoming James Bond does not guarantee an upward mobility or even happiness, for that matter. Data shows it’s a career killer. It certainly doesn’t score you intense Oscar-worthy drama roles. Actors lining up for the role are usually cash-strapped.

And finally, there’s the cancer connection. As president of Scotland Bloodwise and, of course, creator of My Peak Challenge, which donates half of its profits to seek a blood cancer cure, Sam found creative camaraderie with the film’s writer/director, Susanna Fogel, who recently wrote two seasons of a leukemia-stricken character in the TV drama series, Chasing Life.
–
–
–

Spoilers follow… because, why not? We all read Outlander  and still tuned in for the TV show, so feeding us details doesn’t seem to quell our interest. In fact, it’s just the opposite…

–
–
–
Here’s what we know thus far about The Spy Who Dumped Me. The film is executive produced by Brian Glazer and Ron Howard of Imagine Entertainment. It’s also written by: David Iserson, who wrote for Saturday Night Live, New Girl, Mr. Robot and Mad Men. It will be filmed in studio in Budapest, and exteriors are set to be shot in Prague, Berlin, Amsterdam, and Copenhagen. Right now, it is scheduled for release on July 6, 2018.

But what’s the film about? Well, I’ll tell you what we know about the plot – warning: more spoilers below – from Script Shadow:

But before we do, I’d like to note that, at this point, we don’t know if Sam’s playing Drew or Sebastian. But if the ACT I “call to action” is Drew’s plea to Audrey/subsequent death (at only 10-20 minutes in), then let’s hope it’s not Sam. Unless, there’s a twist at the end (Drew’s alive and she has to choose between old and new loves). It’s highly likely Sam is probably Sebastian.

Audrey’s weirdo best friend, Morgan (played by Kate McKinnon), is one of those girls whose parents told her she could be anything she wanted and has parlayed that mindset into pursuing the lucrative market of performance arts.

On her one-year anniversary of meeting Drew, Audrey is approached by a cute British guy named Sebastian who tells Audrey that Drew is a spy and he needs to know where he is. Audrey doesn’t know, but later that day, Drew shows up to get his stuff, only to be assassinated right in front of Audrey’s eyes. With his dying breath, Drew gives Audrey a jump drive and tells her to deliver it to a guy in Austria or really bad things will happen.

Audrey doesn’t want any more blood on her hands than the blood from her dead boyfriend that’s on her hands, so she recruits Morgan, who’s more than happy to play spy, and the two fly to Austria. But once there, they realize they’re in way over their heads, and a cacophony of John Wick level assassins are quickly on their tail.

They eventually meet up with Sebastian again, who Audrey’s starting to like, and attempt to figure out what the data on the jump drive means. Just when Audrey thinks this whole thing will finally be over, she’s confronted with a shocking revelation that throws everything up in the air.

Tune in to find out…

-How long can a jump drive last in someone’s vagina?

-Can Sebastian be trusted?

-Why is Morgan so obsessed with uncircumcised penises?

Hopefully these questions will be answered soon. Or else our amateur spies will end up professionally dead.