I have been to the small Ayrshire village of Dunure many times in the past 20 years – always with my husband, Sandy, and my two boys in tow.  It was a great place for paddling, fishing in rock pools and generally running the boys’ energy off before a picnic followed by pokey hats, also known as ice cream cones to you non-Scots!  This week, though, I saw it in a totally different light as it was turned into an 18th century fishing village with all the colour and effects that would make you believe it was me who had gone back in time.  Join me as I recount my day watching some of the final season 3 Outlander  scenes to be shot in my beloved Scotland…

Getting to Dunure was no mean feat.  When we had gone down for a wee look the week before, we had travelled there in no time.  Should have known better, as there was a queue on the motorway which took forever to get through or, at least, it felt like it.  Then there was the police car who decided to pull up along beside us for a quite a few miles so there could be no breaking the speed limit.   Aaaargh – this was not going as planned!

I left Sandy to park the car and hot footed it down the hill just in time to hear Catriona Balfe saying, “I really need to get onto set now” and watched her head off to the harbor.  Two minutes earlier and I could have been one of the very pleased Outlander  fans who had managed to get autographs and photos!  Ah well, more chances to come I hoped. 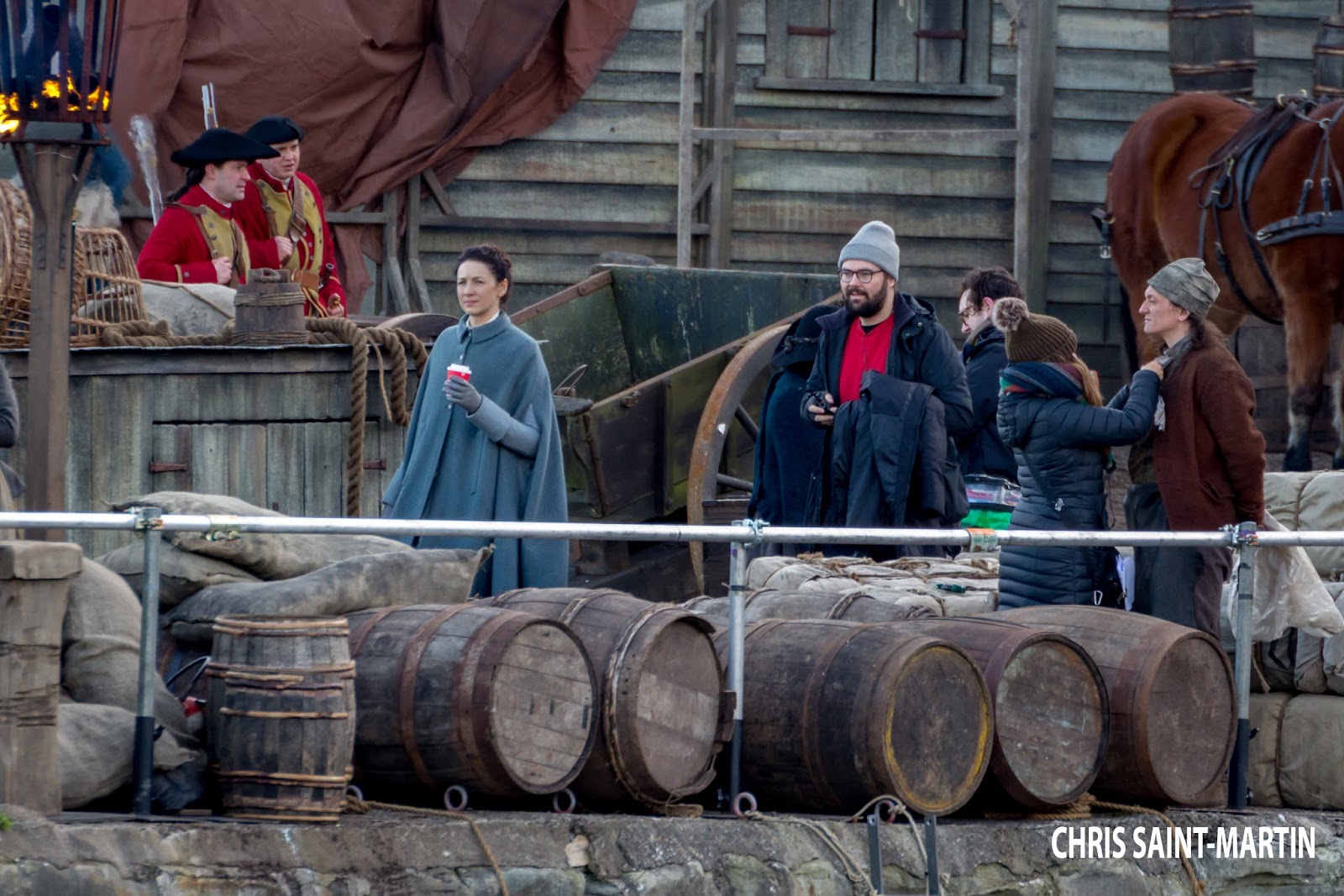 Sandy had driven me down and although he loves Outlander,  he doesn’t like watching filming – what is wrong with the man?   So, he headed off – sandwiches in hand and walking poles at the ready – for a walk along the Ayrshire Coastal Path, which passes through Dunure.  As it turns out, he kept reappearing when I thought he had gone, so maybe there isn’t quite as much truth as I thought to his claim that he doesn’t like the filming!

The weather forecast called for rain, so it was a relief that the weather forecasters had gotten it wrong.  Nothing new there, then, as this is Scotland after all – four seasons in one day is the norm!  It was a brilliantly sunny but frigidly cold day. 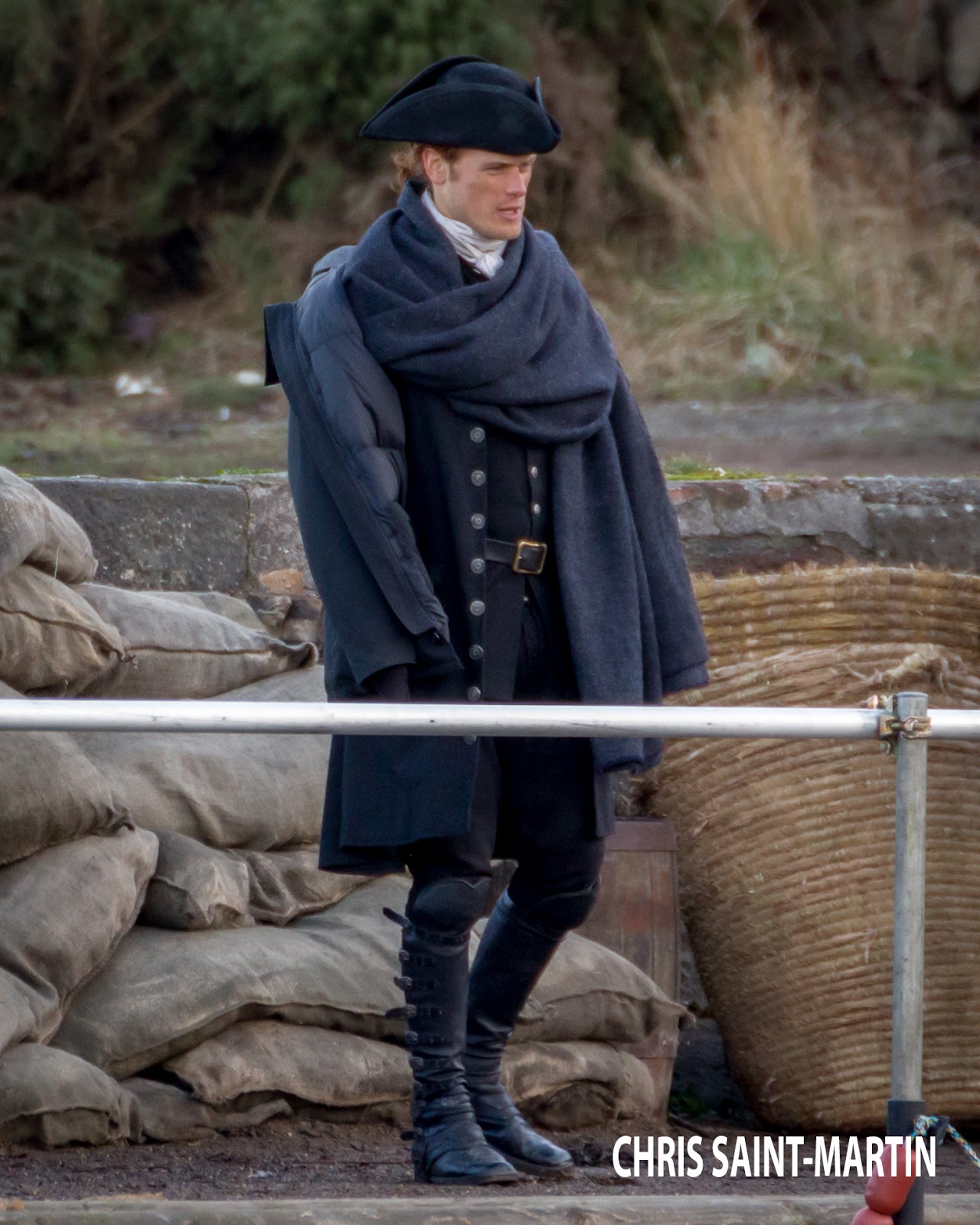 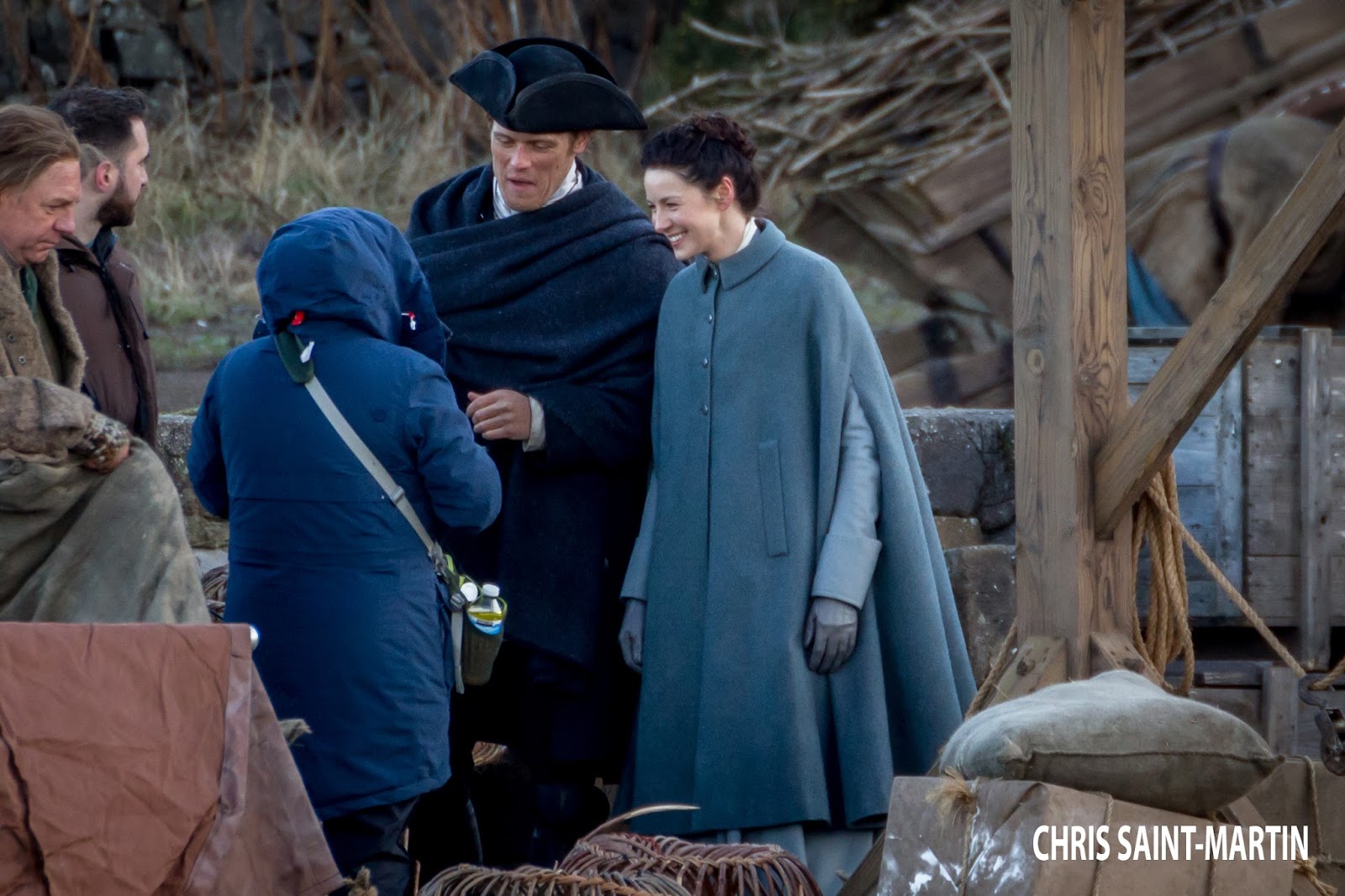 Sam Heughan was already on set waiting for Caitriona and then it was on to rehearsals and takes, which were not so easy given there were quite a few crying babies amongst the throngs gathered to watch.  Plus, there was the minor problem of having to stop traffic occasionally going past in order to achieve the silence needed for filming.  Twentieth century cars and an 18th century setting don’t go together!  I thought this would be our only action before the lunch break until it seemed poor Caitriona needed a toilet break at the hotel we were standing beside.  With the potential promise of another close encounter with our star, we were all waiting on her return from the hotel toilet – not that we were timing her, of course! 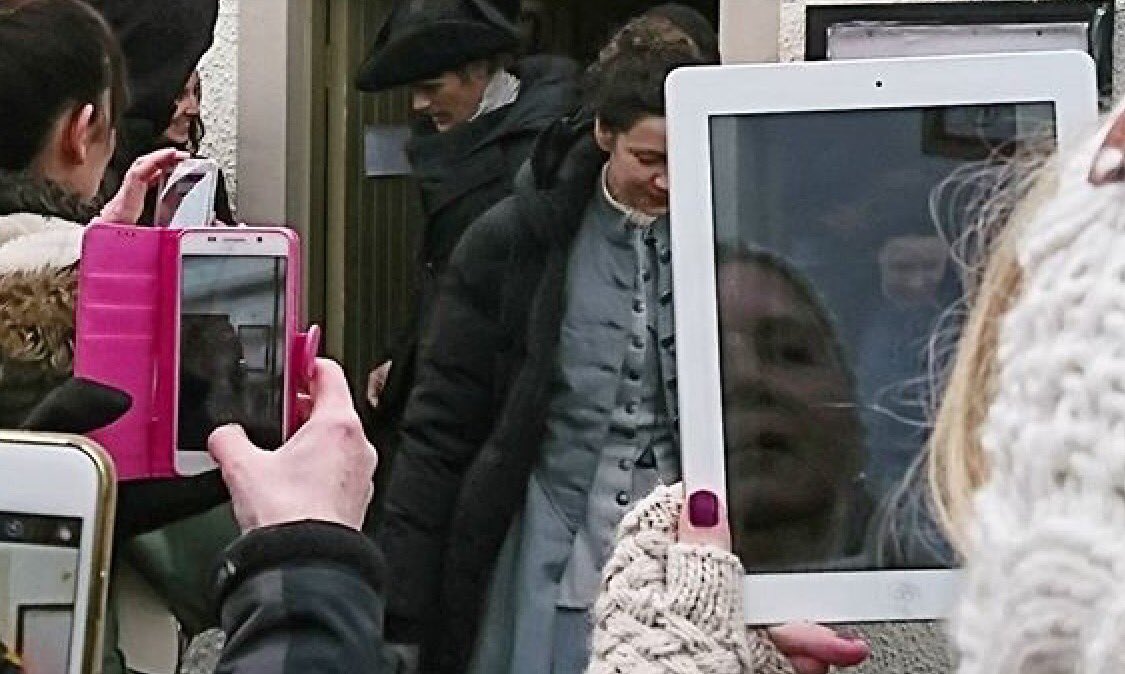 Lunchtime finally came and it was then I wished I had my dog or a baby for Sam and Cait to speak to as the others babies and dogs gathered seemed to be a real draw for both of them.  We were told they would be at least a half hour at lunch so we all waited patiently in the now arctic temperatures in the hope of a photo or an autograph. We did get some photos but were promised more when the filming wrapped and told that Cait and Sam would sign autographs and pose for pictures.  Enough said.  It was Baltic out but none of us were moving! We all had one thing in common apart from wanting to see Sam and Cait and that was bright RED noses! 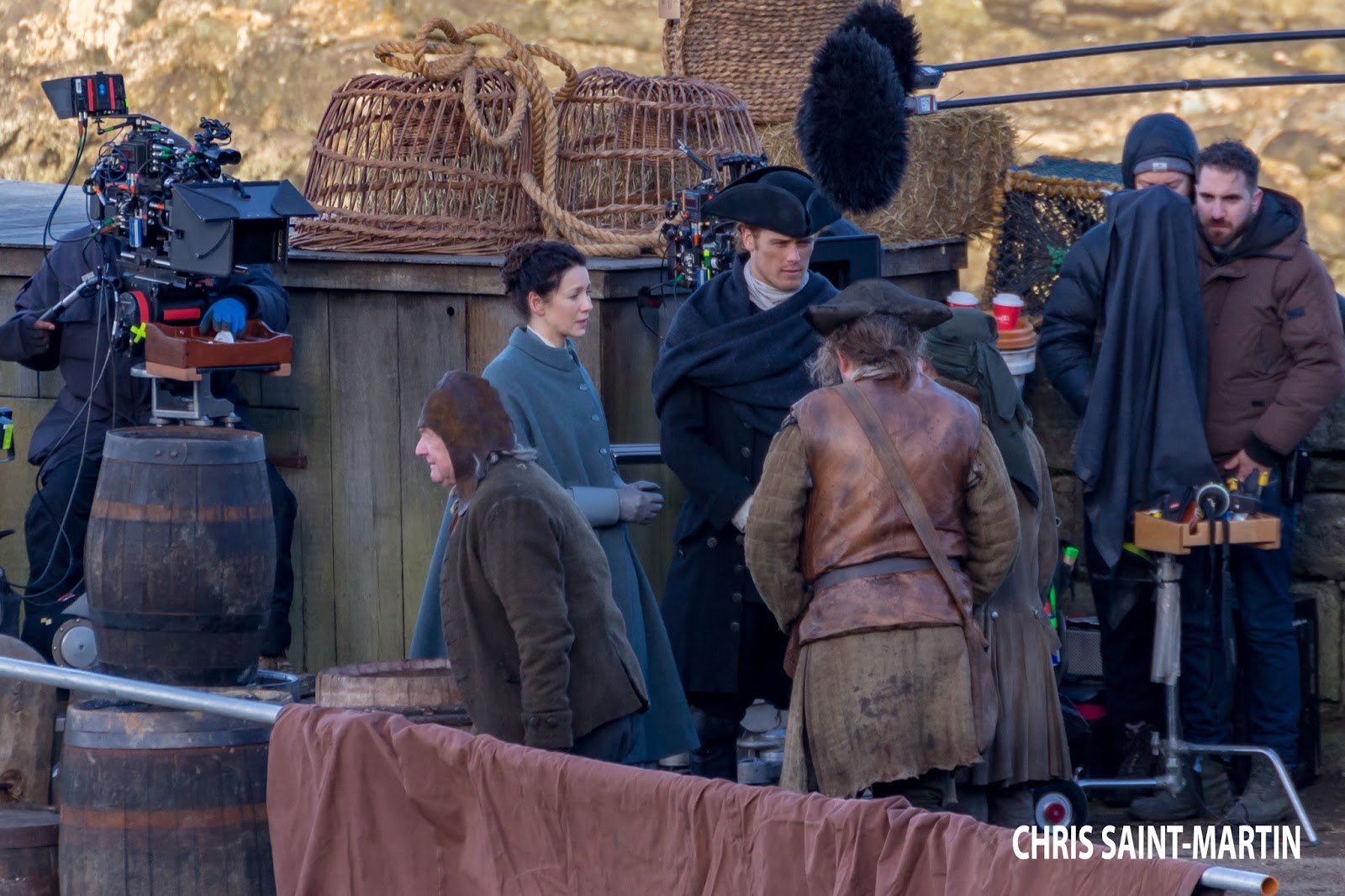 We had been told by some of the security men that filming was due to go on until 5:30 p.m.  Would we still be alive then, or will we have frozen to death?  Luckily for all of us, we heard a huge roar and clapping and we knew it was done.  They had finished early! Now to see Sam and Cait again.

They both came walking along with all the extras and crew and proved they have no airs and graces, but are just part of the cast.  We all surged forward and managed to be one of the first to get a photo with Sam.  But, noooooooooooo – my iPad froze and wouldn’t take a photo!  Sam was lovely and tried to get it working, but no such luck and I had to let him move on to others.  Just after he walked on, of course, the camera started to work.

Cait looked stunning and it was clear to see why she had been a  model for so many years.  She wore hardly any makeup and still looked amazing.  She first went to the many children who were there as the local school had just let out.  Cait took lots of photos with the school kids and while she was signing autographs, I heard her say “He signs it so big that he never leaves me any space” (referring to Sam) and, “Look at that –  he’s written all over my face!”  All in good fun, of course! 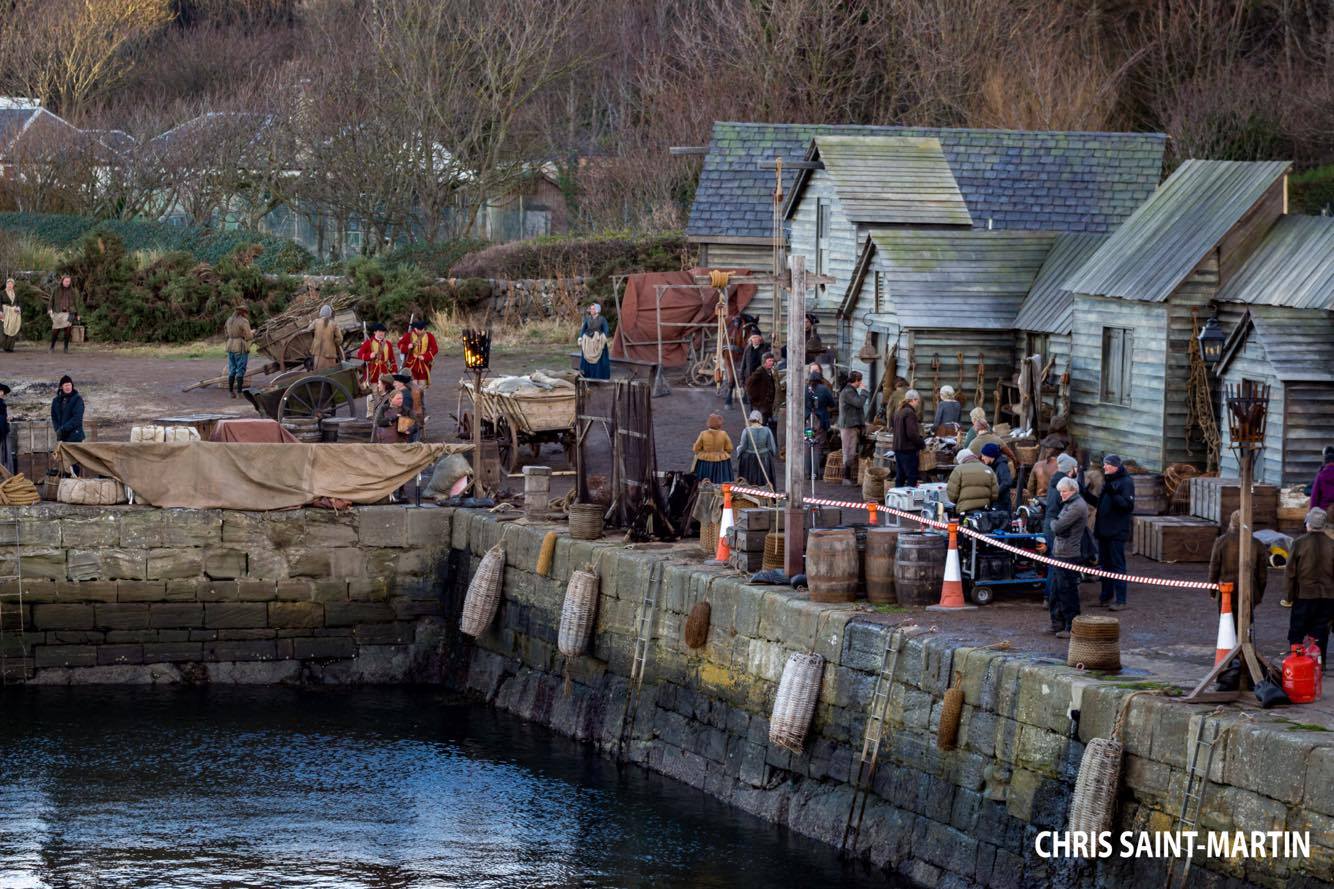 I had my photo taken with Cait and, finally, with Sam as they were both extremely generous with their time. But, then their drivers came up and said it was time they were going.  They left many extremely cold but happy fans behind and I am so glad I was able to spend the day in Dunure.  I met many lovely, like-minded people and enjoyed a day of talking about nothing but Outlander! As Sam stepped away to get into his car, he shouted out to all the fans a hearty, “Goodbye, Scotland !”  And as he did, the sun began to set across the Firth.  A fitting end to some of season 3’s last Scotland scenes before cast and crew head to South Africa to film.

On a side note – it’s my birthday soon and, therefore, I’m wondering how my hubby would feel about buying me a wee ticket to South Africa.  A fan can dream…

The Outlander Cast Blog would like to thank our intrepid correspondent and New Glasgow Girl, Morag Wright (pictured below right), for her reporting and ability to withstand the cold — a true Outlander  fan!  Thanks also to Catriona Stevenson of Slainte Scotland for her photo contributions.  Also, special thanks to Chris Saint-Martin for allowing Outlander Cast Blog exclusive use of photos taken on set this week. If you’d like to use the photos, we kindly ask that you give credit to Chris and the Outlander Cast Blog.

Have you ever visited a film set?  If you were to see Outlander filming, what would be the first thing you would do?