Outlander episode 3.05, “Freedom & Whisky,” found inspiration for its title in a poem by Scottish poet Robert Burns.  We dive deeper into the history and meaning behind it.

Outlander’s episode 3.05 title intrigued me as soon as it was released some time ago. I recognized it as an oft-quoted line from Scottish poet Robert Burns, and a call-out to a critical portion of Diana Gabaldon’s Voyager novel. And, as we reached this point in a spell-bounding season of Outlander, I wondered what connections would be made and how the production would parlay this bit of Scottish history with the story of Jamie and Claire’s reunion. As with most of Season 3, the linkage was flawless. But, it’s worth delving a bit into Burns’ head to understand some of the double meanings that make this episode title a clever plot point for Outlander.

Burns wrote the poem “The Author’s Earnest Cry and Prayer” in 1786. It’s from this we find both Voyager and episode 3.05’s reference in the 32nd stanza of this lengthy poem.

Scotland, my old, respected mother!
Though sometimes you moisten your leather,
Till where you sit on heather-tops
You lose your water,
Freedom and whisky go together,
Take off your dram! — The Author’s Earnest Cry and Prayer

In both the television production and the novel, it was revealed that “A. Malcolm” (a.k.a. Jamie Fraser) had published an article in which the “Freedom and Whisky” line was quoted. Knowing that Claire had quoted that poem to Jamie on numerous occasions when they were together was a nod again to Claire’s “knowledge of the future.” Robert Burns was born in 1759 and, therefore, in the fictional Outlander world he was nae yet a gleam in his father’s eye during Jamie and Claire’s exploits of the mid-1740s. So, when “A. Malcolm” the printer was seen to have published and quoted portions of Burns’ poem in 1765—when Burns was only 6 years old—it could only have been because he had heard of it from his wife, Claire.  This was the clue that gave Claire the final push to return to the 18th century to find Jamie once again.  However, stepping away from make-believe Outlander world, what was the Scottish bard’s motivation for the poem and why was it a reflection on both the times and Burns’ colorful life? 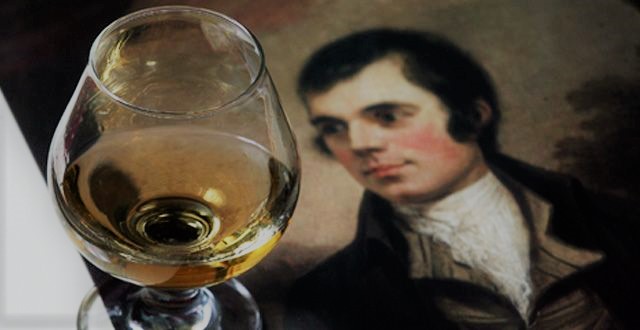 Only 13 years before Robert “Rabbie” Burns was born in Alloway, Ayshire, the Jacobite rising had taken place. As Burns came of age, the vestiges of revolution lay smoldering like much of the Scottish culture after Bonnie Prince Charlie and the failed uprising. Outlander, the novel and television show, does touch on the spoils of war and the utter devastation left behind by the English victors. Execution, imprisonment, banishment (the clearances) and eradication of cultural mainstays, such as the wearing of the plaid, the Gaelic language and the folk music so important to the Scottish culture, were banned as the English royal family began to dictate how the Scots would live and work.

As a young man, Burns chafed under the notion advanced by the English that not all men were created equal and there was a hierarchy to society. One of the early and most prominent Scottish nationalists of his time, Burns found vexing the oppression of the English and the circumstances of the agrarian lifestyle to which he was born. However, despite spending his early years laboring on the family farm, Burns’ parents made sure he received a tutor and shared with him and his six brothers and sisters songs and writings of the ‘auld’ Scots. As with our fictional James Fraser, Burns joined Free Masonry and enjoyed the very close brotherly values of the Free Mason covenants. For Burns, Free Masonry embraced that which he sought most in life and was willing to crusade for—an emphasis on all being considered equal with no upper class and all classed as brothers.

As young Rabbie began to devour books about the freedom fighter, William Wallace, and other revolutionaries, he actively embraced the anti-establishment crusade. Wallace’s influence showed in this famous line where Burns said, “The story of Wallace poured a Scottish prejudice in my veins that will boil along there until the floodgates of life shut in eternal rest.” It was also Burns’ early hard-knock life and perspective on the difficult existence that his father led as a tenant farmer which directed him to pursue writing and other forms of escapism, which he began to use to express his own revolutionary ideas.

Burns gained a reputation as both an intelligent scholar and a bon vivant amongst the young men of his time.  It was during this period in his life when Burns’ sometimes singular pursuit of women and whisky informed many of his most famous works of poetry. Whisky, in fact, for Burns, offered escape and freedom from the depressing and mundane life on the family farm. Burns was fascinated by the effects of whisky and its mind-altering ability to bring out his most creative side. In his famous poem “Tam o’Shanter,” Burns describes the “drinking classes” in the old Scots town of Ayr.   The poem is populated with colorful characters—many of Burns’ drinking mates—and contains some of the most humorous lines of Burns’ career, reminding us once again of his passion for whisky and its ability to embolden and make free his creative desires.

Inspiring, bold John Barleycorn! (whisky)
What dangers you can make us scorn!
With ale, we fear no evil;
With whisky, we’ll face the Devil!
The ales so swam in Tam’s head,
Fair play, he didn’t care a farthing for devils.
But Maggie stood, right sore astonished,
Till, by the heel and hand admonished,
She ventured forward on the light;
And, vow! Tom saw an incredible sight! —Tam o’Shanter

When Burns wrote “The Author’s Earnest Cry and Prayer,” it was meant for the Scotch Representatives in the House of Commons. Burns made clear his annoyance with what he perceived to be Parliament’s bias against the national drink of Scotland. There had been legislative attempts by the British to disadvantage local distillers and those using domestic stills to produce the aqua-vitae (water of life).

You Irish lords, you knights and squires,
Who represent our boroughs and shires,
And prudently manage our affairs
In Parliament,
To you a simple Bardie’s prayers
Are humbly sent. —The Author’s Earnest Cry and Prayer

In a nice tie-back to our fictional Jamie Fraser (A. Malcolm the Printer), the article found by Roger Wakefield believed to be penned by Jamie quotes, “you knights and squires who represent our boroughs and shires.” For we come to find out (*spoiler*) that, in addition to Jamie’s legitimate printing business, he was a bootlegger of fine spirits and whisky.  Jamie used his ability as a printer to spread seditious propaganda to seek the freedom that Burns also sought — to be without restriction to distill the Scots native drink. 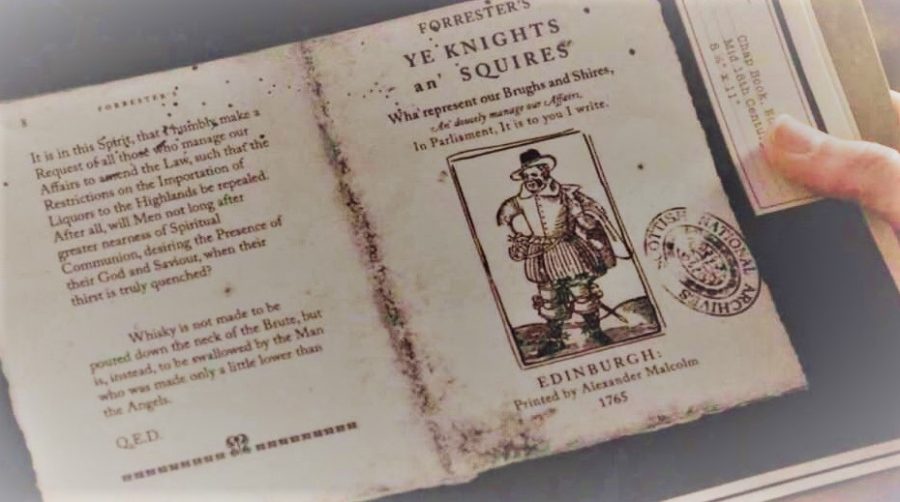 Meanwhile, Claire seeks to free herself from her old life by making the difficult choice to leave her career, best friend and only child to find the love of her life in an uncertain and sometimes difficult period in history. It’s probably no coincidence that our characters were seen toasting and/or imbibing almost a half-dozen times during episode 3.05. The whisky has become symbolic of Claire’s decision to return to the past and find the home and the freedom once again to be her authentic self with Jamie. 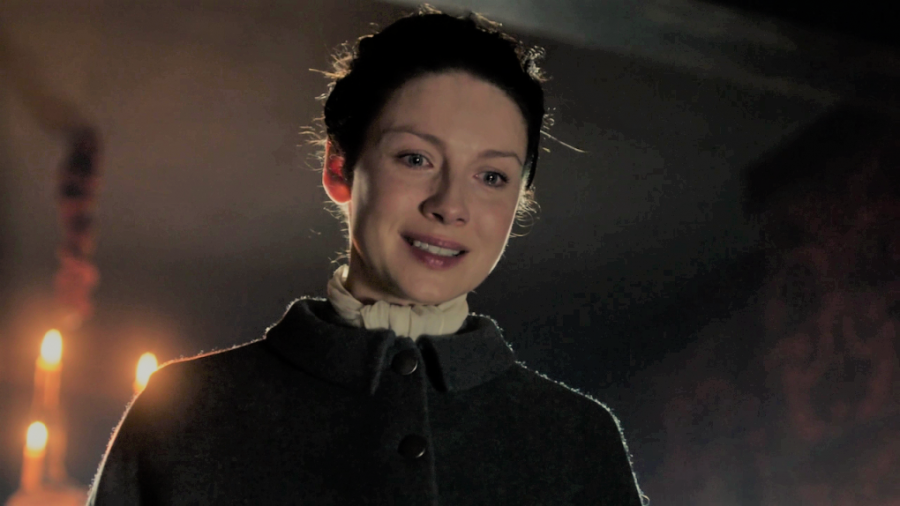 It’s important to note a few points, however, even as we give a nod to the television show’s treatment of Scottish history. Despite the overall positive reception that Outlander gets in Scotland due to the “Outlander Effect” and the exponential increase in tourism there, there still remains subtle undertones of criticism that the fictional television show bastardizes #RealScotsHistory.

I can see both sides of this argument. But, I heartily congratulate Toni Graphia and the writers at Outlander for seeking to pull bits from the novel that have a real historical tie to the spirit of Outlander and the story’s non-fiction elements. It’s the classic Burns line—“Freedom and Whisky”—that was highlighted in a perfect storm of non-fiction and fictional storytelling. It represents a lovely tribute to the Bard, Robert Burns, and a nod to that period in Scotland’s history when individual freedom was highly valued and sought. Just as Claire longed for the life she had left behind, many of Burns’ poems illustrated a longing for the auld Scots way of life free of the burden of oppression.

In Scotland today, nationalism and a desire for freedom continues in earnest. The short-lived life of Robert Burns remains an enduring legacy for those fighting for self-determination and freedom from the confines of Westminster.  Kudos to the Outlander production for highlighting this important piece of Scots history and giving a nod to future struggles for Scottish independence. 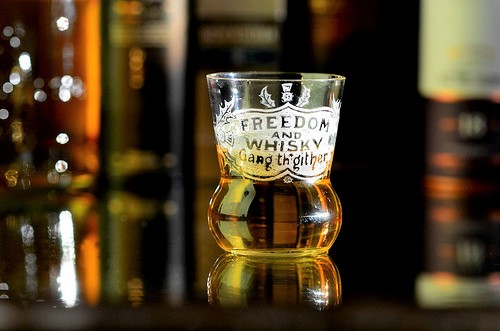