Dear Outlander Crew: Thank you Toni Graphia and Matthew B. Roberts for That Dylan Song

In Outlander Season 3 episode 4, Toni Graphia and Matt B. Roberts used music inspired by Bob Dylan for an emotional kicker.

As everyone from Ron D. Moore to Maril Davis to Caitriona Balfe and Sam Heughan have said repeatedly since Outlander began: the show owes a great deal to the people who work tirelessly behind the scenes to make it all work. We decided it was time to recognize those people who may or may not get a mention on the credits as they scroll by. The first in our series showcased Arron Cuthbertson  for his outstanding job with the extras in “The Battle Joined,” and Annie McEwan and the amazing make-up team for helping to create “Cave Jamie” in “Surrender.” While we have plenty of reasons to thank Toni Graphia and Matthew B. Roberts, this time it’s for their unique decision to end “Of Lost Things” with a montage set to a re-worked iconic Bob Dylan song.

Music nourishes my soul. It provides both a soundtrack to the routine aspects of my everyday life—grueling commute, work projects, cooking dinner, endless loads of laundry, toddler meltdowns, etc.—as well as a musical time stamp left on those especially memorable moments life awards me—good or bad. My taste in artists, genres and styles runs the gamut and, as of late, the music of Outlander and Bear McCreary’s spectacular compositions have warmed their way into my daily rotation, like a trusty companion on life’s adventures.

Is music an indispensable part of your world too? Are you wired like me? You must be. Because Sunday was all together special. Sunday you did me in. Sunday, through the very purposeful choice to end an already powerful episode with a montage set to a Bob Dylan song, you enabled me the space and time to do something I didn’t realize until that moment was so desperately needed. You gave me two-plus focused minutes to exhale all the pent-up emotion Outlander Season 3 has roused in me by watching Jamie and Claire’s separate but parallel lives.

It’s not a unique concept to tie up the final scenes of an episode with a pretty montage bow. Heck, it’s a weekly given when you consider ensemble cast dramas like Parenthood, This Is Us, The Americans, pretty much every Shonda Rhimes show, etc. It is unique, however—and quite the bold decision—to insert one into a period drama known for its orchestral soundtrack only and not for its use of montage.

Short on dialogue, if any, montages step outside of the show’s usual soundtrack to make room for a song chosen specifically to create an emotional shortcut. While some people find them a saccharine, forced tactic, I’m a sucker for them. Who among us wouldn’t take weepy gratification in seeing snippets of our life strung together—for better or worse—and set to the perfect song? Call me an easy target, but then sign me up.

I’ve seen two camps of people arise since Sunday’s episode: “the music at the end was distracting, jarring and a departure from the Outlander I know” and the “Bob Dylan’s ‘A Hard Rain’s Gonna Fall’ in this moment?!? DEAR GOD, GUT ME. Permanently.” I stand firmly in the latter camp, and not just because I reacted with those words exactly as the episode aired.

You two and the rest of the powers that be rarely use contemporary songs, as you noted in an interview with EW‘s Lynette Rice. But when you do, it makes me, as a viewer, sit up straighter and pay closer attention because I know it’s for good reason. That it’s an intentional form of storytelling you’ve deemed necessary. And because you’re not ones to lean heavily on musical montages as a way to shove down our throats an emotional footnote to the show’s episode, I appreciated it all the more when you finally did. 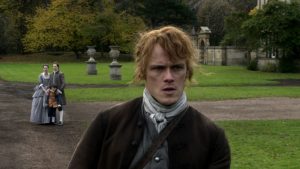 If there ever was a moment to use it, this was it. If there ever was an artist whose iconic lyrics so aptly matched the scene playing out on screen, it was Bob Dylan. And as much as I treasure Bob Dylan, his lyrics here were enough of a Dylan appearance; his voice, however, would have stolen the moment. I don’t think I was the only one who quickly opened the Shazam app to identify those harmonic voices jumping through the screen. You could have chosen more than 30 different covers of this song, some by more notable, bigger names like Edie Brickell, Jason Mraz, Robert Plant and more. But you didn’t. You made a more obscure choice by using Walk off the Earth’s version that allowed us to be drawn in by the lyrics, the scenes playing out, the voices (which, of note, featured a female-male duo as Claire’s and Jamie’s respective fates unfolded on screen)—without the distraction of recognizable star power.

And for that, I thank you. Thank you for constructing a montage that allowed our beloved characters’ lives to also parallel our own, and what we, too, must often endure—grown-up choices that may or may not be ones we want to make, but ones we know we have to make. And sometimes the well-placed inclusion of the perfect song can make those adulting moments a tad more bearable. This season as a whole is making me fall hopelessly in love with this show all over again, and this emotional love note at the end only sealed it. So again, thank you.

With love and admiration from an Outlander fan,
Ashley