Want a minute-by-minute recap of Outlander Season 3 episode 10, “Heaven and Earth?” We give all the details…

Do you find yourself gabbing obsessively about Outlander to your friends and family? Wishing your Sunday nights included a living room full of people with whom to watch, discuss, comment, cheers, jeers and well, experience alllllll the feels? Dinna fash, Obsessenach—you are not alone.

Good news—we can pour ourselves a dram and, through the magic of technology, enjoy it together! As we brought to you during Season 2, we’ll be LIVE blogging all the episodes in Season 3. Like the Outlander Cast podcast, it will be SPOILER FREE for non-book readers.

Not into distractions during your visit to the World of Outlander? That’s okay! Our LIVE blogs double as episodic recaps to serve as a trusty viewing companion on your second, third and umpteenth re-watches (hey, we get it).

So get all your post-18th Century gadgets ready and settle in, because the best things in life should be shared with a buddy. Hi, buddy.

[8:01 p.m.] Previously on Outlander we became intimately acquainted with the inner workings of Marsali’s face. Her eyes and mouth are, apparently, connected and an eye roll is always combined with a sarcastic mouth twitch, proving that an art exhibit of teenage facial expressions through the ages would contain only one image. 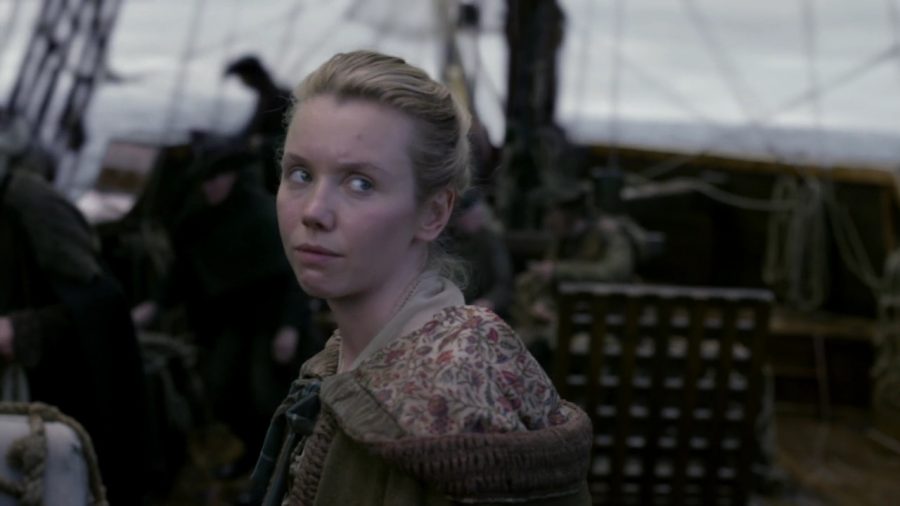 [8:02 p.m.] Can we stop touching that damned horseshoe already? Fergus secured rose hips, cloves, lavender, and orange peel as a potpourri for Marsali. If it doesn’t make the cabin smell better they should be able to brew a fine tasting tea. [8:03p.m.] Jamie looks through the spyglass and sees Claire giving the other ship’s captain hell. Despite his panic he must also be thinking “that’s my girl.” [8:04 p.m.] The side eye game is strong here. Jamie is finding that it’s easier to free Claire from a frenzied witch trial, an army fortification, a mad Duke’s house, and the grip of the 20th century than a British Man-O-War. Hopefully, all that practice will eventually pay off. At this point Jamie could call “rescuing Claire” a hobby. [8:05 p.m.] Casks of créme de menthe…I thought we would never speak of them again. I kid, Jamie is never more than a few steps ahead of his past. It follows him like the longing for delicious cheese and wine follow me. [8:06 p.m.] Claire just schooled Mr. Jones on the differences between shite and vomit. Someone failed him earlier in life but it’s good that he’ll be able to spot the difference from this point forward.

Incredibly important ’80s throwback moment:
It seems that Claire isn’t the only time-traveler here as a young Corey Feldman is playing Mr. Pound. Please let there be vampires. And Jason Patric. And Gremlins. And Goonies. And Corey Haim. Sorry, I just took a mental tour of the poster-filled walls of my childhood bedroom. I’m back now. As you were!

[8:07 p.m.] Claire just switched from badass doctor to every over-protective mother in the history of the world (complete with the terrifying momma eyes). Had my mother ever ended a tirade with the phrase “by putting them in your mouth you’ve fouled them again” I would have gladly taken whatever punishment followed my fit of laughter. Also, I feel ya Mr. Pound, it’s always a shame to let the ___________ (fill in the blank with your favorite adult beverage) go to waste. [8:08 p.m.] While Claire’s headwrap is amazing Mr. Pound is concerned about the sun’s impact on her Claire hair. Tricorn hats are famed for being SPF45. If you don’t believe me look it up (please don’t). [8:09 p.m.] The number of casks of grog used is directly proportional to the number of men that can be saved. I like it when Claire does medical math. [8:10 p.m.] Claire is feeding the sick sailors scalded goat’s milk and pounded biscuit. I’m not sure I could “keep that down” and I definitely don’t have typhoid. [8:11 p.m.] This interaction between Claire and Mr. Pound is so sweet and not unlike her working with wee Fergus at Prestonpans. She seems to have a knack for building relationships in the midst of circumstances that would bring most people to their knees. [8:12 p.m.] The surgeon’s handwriting is fabulous. I can’t help but wonder if he’d still be with us if he had focused less on letters and more on the illness onboard his ship. Claire has been done in by obsessive penmanship. [8:13 p.m.] Conditions are bad but Claire’s dress and headwrap are fabulous.

[8:14 p.m.] Move over Typhoid Mary, Joe Howard is coming through and he’s got his infested hands in your lunch plate. Why did Claire have to be pressed into service on a British ship to finally find a group of men willing to protect her and value her knowledge?

I thought I would be disappointed by Jamie and Claire’s continued separation but I wasn’t. We finally saw Claire begin to get comfortable in her 18th century skin once again. With nowhere to run she was forced to deal with the situation at hand, and she did so admirably while gaining the respect and gratitude of the surviving men on the ship. Jamie spent most of the episode helplessly locked below deck while his daughter and son/daughter-in-law and son used the wisdom they had gained from him in their short lives to both free him and save him to fight another day. I loved this subtle passing of the torch to a new power couple that we will, no doubt, grow to love in the coming episodes. As has been the case for every episode this season, Sam and Cait’s acting were phenomenal. Their portrayals of grief, joy, and desperation have left me breathless more times than I can count.

I don’t usually talk much about the inner workings of this show because, honestly, I don’t understand them. However, I am stunned at the visual effects used to create the story of this magnificent ocean voyage. Remember, that the ships you see on screen are on dry land in South Africa. If you want to know more about this digital magic, I encourage you to read our very own Jayne Coleman’s blog post from earlier this week. She recently had the good fortune to interview Dries du Preez, a visual effects artist, who works on special effects in South Africa.

Later this week the Americans among us will celebrate Thanksgiving. I want to take this opportunity to thank you all for creating and being part of an amazing Outlander community. I am thankful for the Outlander friends that I’ve made this past year and I hope to make a few more in the years to come. To those of who you are celebrating, Happy Thanksgiving to you and your families.

Finally, whenever Ashley hands over the live-blogging reins, my only goal is to not break anything. If you read this blog and thought it was worse than watching wee Fergus get his hand chopped off with a sword, then please come back next week when Ashley will resume her spot at this ship’s helm and set us on a course to Jamaica.