Outlandish Theory: Will Ron D. Moore Step Down As Showrunner?

Outlander showrunner Ron D. Moore has been the vision leader for this successful STARZ show. Here’s why he may step down after Season 4.

Let me preface this article with a few points right off the top:

Ron already seems to be distancing himself from the minutiae of the show. Here are some examples:

These points were obvious even before Variety released its RDM interview in which he described his role in Seasons 3 and 4 like this:

I’m still the showrunner, but a lot of the day-to-day showrunning is done by [executive producers] Matt Roberts and Toni Graphia … I’ve delegated more authority to them. Matt is on the ground a lot in the U.K., and Toni is in charge of the writers’ room. And they both report to me and I still sort of oversee the whole production. But I’m not on the front lines like I was.

I can’t begin to tell you the VOLUMES spoken in this simple statement here by the man himself! He even DOUBLES DOWN by saying:

They’re competent, and good, and smart, and they add different things than I would to the production … you want your people to take on more responsibility, and you want them to grow within the show, and you give them room to do that. Sometimes you just have to be willing to delegate, and not feel like you’re the only one with the answer.

Now delegating in and of itself is not unusual; showrunners simply can’t be everywhere, every day.

For example, Damon Lindelof ran The Leftovers from L.A. But when the show moved from New York in Season 1, to Texas in Season 2, and then to Australia in Season 3, Lindelof’s executive producer/director Mimi Leder ran most of the day-to-day activities. So with regard to RDM and his team, his delegation this season is not as damning as it may sound. But, again, this is another tiny red flag that waves uncontrollably in the back of my brain.

What Could Suggest Change: The Intangibles

I know a lot of this is circumstantial evidence. Nothing here explicitly serves as a smoking gun that he would either leave the show, or that he is even THINKING about leaving the show. That’s why these are intangibles. But something just doesn’t pass the smell test for me here. And so, here’s what I think will actually happen…

Outlander WILL BE renewed before Outlander Season 4 concludes because STARZ is starved for good quality content.

Ron will want to move onto to do other projects, but STARZ will demand that he stay on Outlander as an Executive Producer—yes, to keep him involved with the project, but mainly to keep his name in the lights for their advertising purposes. The title is also usually given to those who get a project off the ground and serves as a industry style “thank you” for all their hard work.

Having said that, Ron will leave the show in the hands of his trusted colleagues: his Tall Ship Productions partner Maril Davis, as a producer, his longtime Battlestar Galactica partner Toni Graphia, as a number two, and Matt B. Roberts (who brought the Outlander series to Ron and obviously has the MOST passion for the story), as the new showrunner. 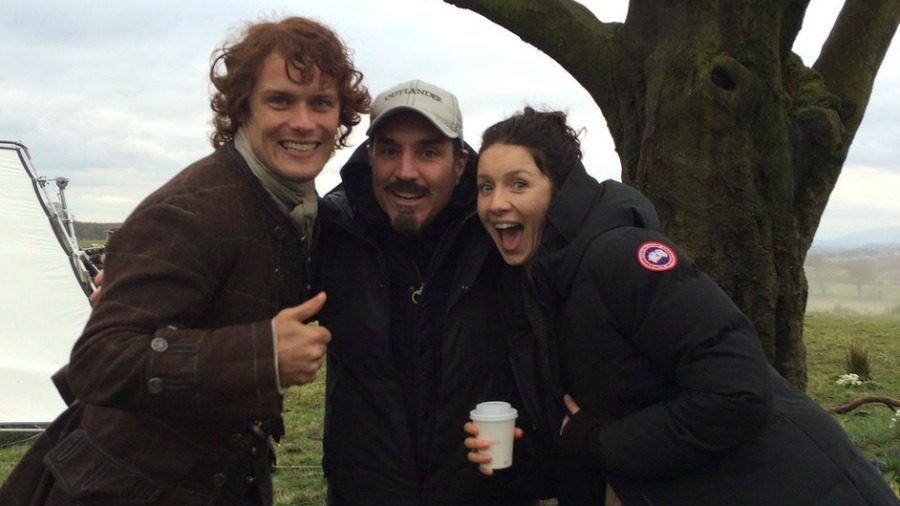 Matt as a showrunner only makes sense. He is passionate about the story, and has clearly taken on a larger producer role within the show (his script writing, location scouting, taking the reins on set, and a larger presence on the podcast/aftershow). You can tell he has a huge on-set and production presence just from his own social media posts. But, even though he has procured plenty of experience, especially in Outlander Season 3, the idea of producing Outlander would become easier for a freshly-minted showrunner like himself with fewer complications due to standing sets and having a true home in the newly expanded Wardpark Studios.

To potentially help ease Matt into a new role as “commander-in-chief,” Ron has already reestablished the writers’ room with plenty of younger and inexperienced writers who have only had Matt as part of the executive decision making process. Matt is young enough that he could take the show all the way to the end. He’d have the helping hand of a trusted confidant of RDM and veteran writer in BSG alum Toni Graphia, and still able to flex his considerable talents on future projects he is passionate about.

It’s a perfect setup: Maril helps take care of the finances and deals with SONY and STARZ as she does with aplomb right now, Toni helps run the writers’ room, and Matt takes care of everything else. Boom.

I know a potential showrunner change sounds like a lot, and if you really love Ron’s work or really love the direction of the show, it can sound scary. I would urge you not to worry about a showrunner change. It’s happened to PLENTY of shows that still saw long and prosperous runs: LOST, Daredevil, The Walking Dead, 24, The West Wing, Veep, Seinfeld, heck even Gilmore Girls.

Another facet to consider here: RDM implies that after Outlander Season 3, and into Outlander Season 4, the story takes a completely different narrative arc as a result of the change in setting.  So if he were to leave after season 4, he would have been in charge of the first natural arc of Outlander, and he can make a clean break while handing off the show to Matt for the next natural narrative arc.

Plus, let’s not forget the fact that, in this scenario, Ron would still be on Outlander and remain as an executive producer. He could still watch over the project from afar, keep tabs on it while fulfilling other creative endeavors, and he would still have a say in where the story goes.

If anything, I see Ron’s career following the trajectory of another heavyweight in the showrunning/TV production world: Carlton Cuse. Cuse ran Nash Bridges, but he is most widely acclaimed as the co-showrunner of LOST with Damon Lindelof. But after his run on LOST concluded in 2010, Cuse, who was 52 at the time, dipped his toes in many projects. Since the LOST finale, he has either written on, or executive produced, the likes of Bates Motel, The Returned, Colony, The Strain, Locke and Key, and is currently showrunning Tom Clancy’s Jack Ryan on Amazon, which is set to come out next year. Oh, and he even wrote a feature film called San Andreas starring the most powerful star in Hollywood right now: The Rock (aka Dwayne Johnson).

This is why I think Ron ends up leaving—because he can still work on Outlander, but produce any show he wants, write any script he wants, and still leave his Outlander baby in the hands of the trusted associates he has hand picked. To me, a move like this for Ron makes sense, and MARK ME, it’s going to happen.

Do you think Ron Moore will step down as showrunner after Outlander Season 4?