How They Made It: Recreating Mrs. Graham’s Shortbread

Welcome back to our occasional series, “How They Made It,” where we explore the food and drink of Outlander. This time, we’ll dive into the world of Mrs. Graham’s shortbread. Slainté!

Finding a friendly face for Claire

When Claire returned to present day Scotland after Jamie sent her through the stones just before the battle of Culloden, Mrs. Graham was there to help soothe her broken heart with tea and biscuits. And even though Walkers Shortbread had been around since 1898, we know that Mrs. Graham was a fine baker so we can assume that her shortbread would be of the highest caliber. Luckily, shortbread only needs three ingredients: sugar, butter, and flour…food rationing in 1948 was still in effect, so getting those few ingredients would be more difficult but not impossible. I can imagine Mrs. Graham in the kitchen baking for the Rev. Wakefield and his guests (and let’s not forget the cherubic wee Roger!). 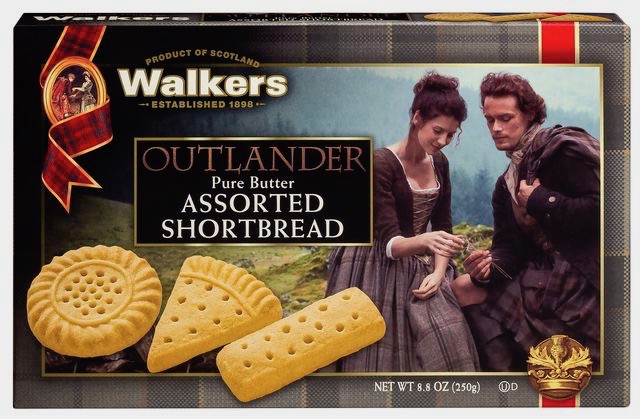 Actually, shortbread dates back much farther than the iconic Walkers’ red plaid boxes. It’s said that back in the 16th century, Mary Queen of Scots favored shortbread in her court. And just how did it come to be called “shortbread” anyway? On my own blog, Scotch and Scones, I wrote all about the history of shortbread…it’s a quick (and highly informative) read. Have a quick peek, then hurry back. It’s okay…I’ll wait…

What would make shortbread different between bakers

Back with me? Great! While you were away, I got to thinking how Mrs. Graham’s shortbread would have differed from mine. Since flour and sugar are fairly standard regionally, the major difference would be with the butter — the different environments and feed of the dairy cows would necessarily produce different butter. The closest approximation I have available to the butter in 1948 Scotland would be Kerrygold Irish Butter (if you’re a U.S. reader, it’s available in most major U.S. grocery stores). I decided to compare shortbread baked with Kerrygold against shortbread made with a standard U.S. butter (in this case, butter from Trader Joe’s, a national U.S. chain with a reputation for good quality products).

I’ve seen shortbread recipes include other flavorings (e.g. vanilla, lemon zest, and lavender) or substitute rice flour in for some of the all-purpose flour. Actually, shortbread can be customized a variety of ways: browning the butter or using brown sugar instead of white…I’ve even made savory shortbread using Parmesan cheese instead of sugar! However, today I’m sticking to the pure, basic recipe. So, I give you the Great Butter Bake-Off Battle! (Try saying that 3 times fast!) 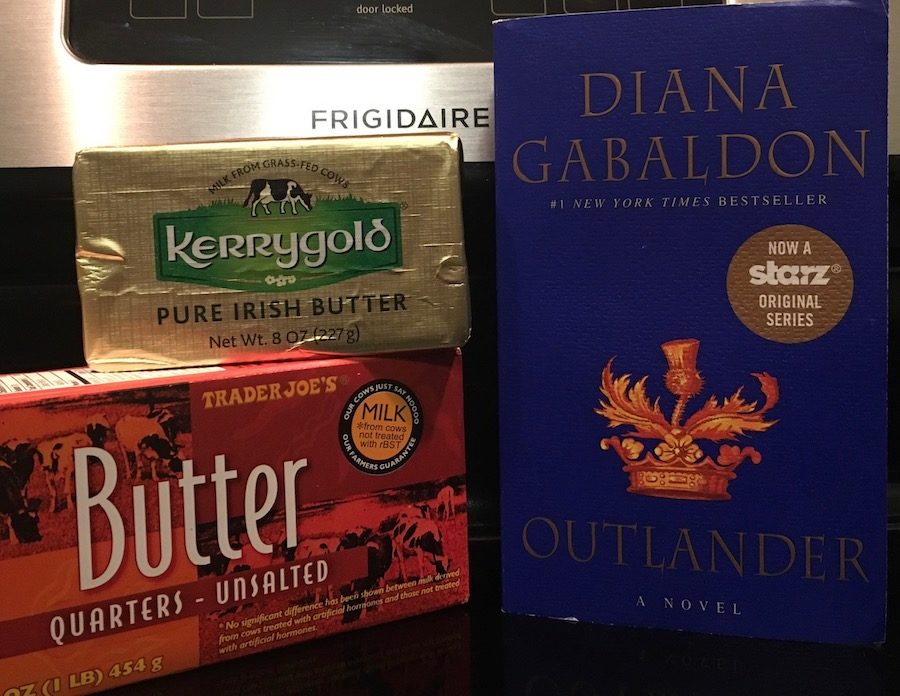 Here are the contenders in the Great Butter Bake-Off Battle

The first thing you’ll notice between the Kerrygold vs. Trader Joe’s butter is the color. Kerrygold is more golden yellow to Trader Joe’s pale ecru. That will translate later into a deeper colored cookie. 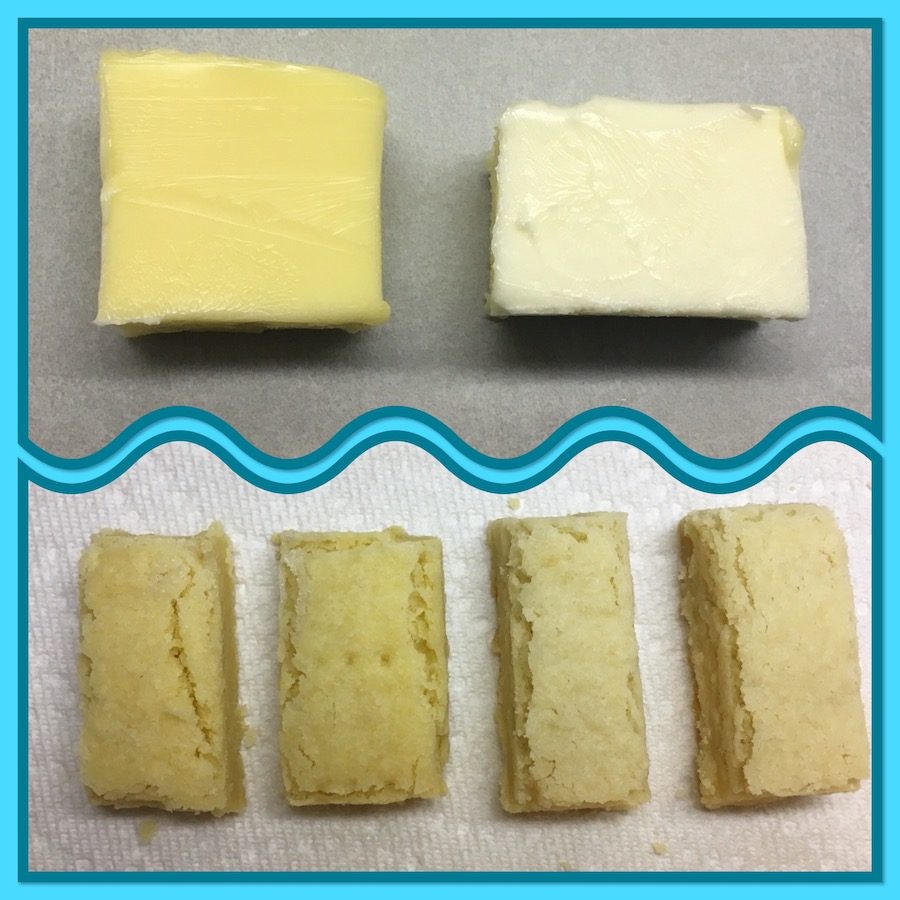 Let’s get started…here is my favorite shortbread recipe (complete with a video). It’s not as sweet as other recipes, but to me that feature allows the butter stand out even more. 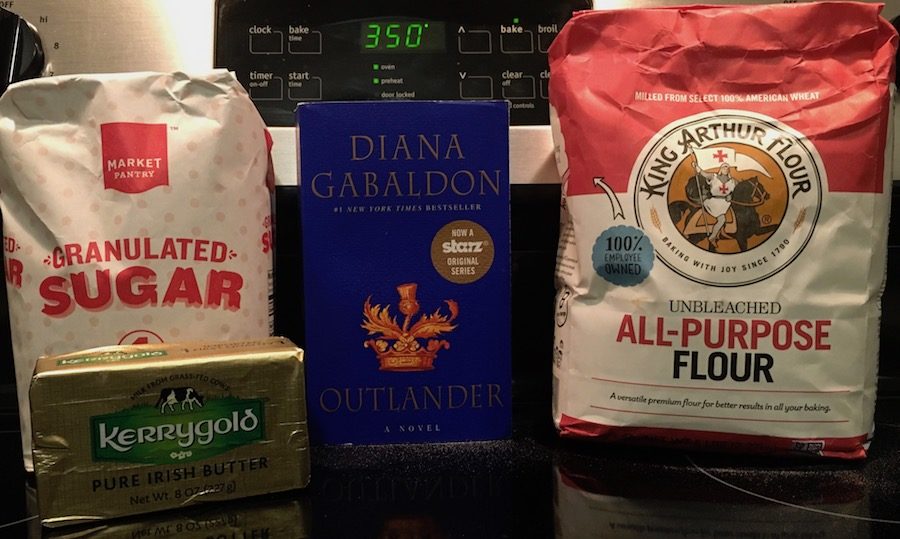 A contestant joins the rest of the team… 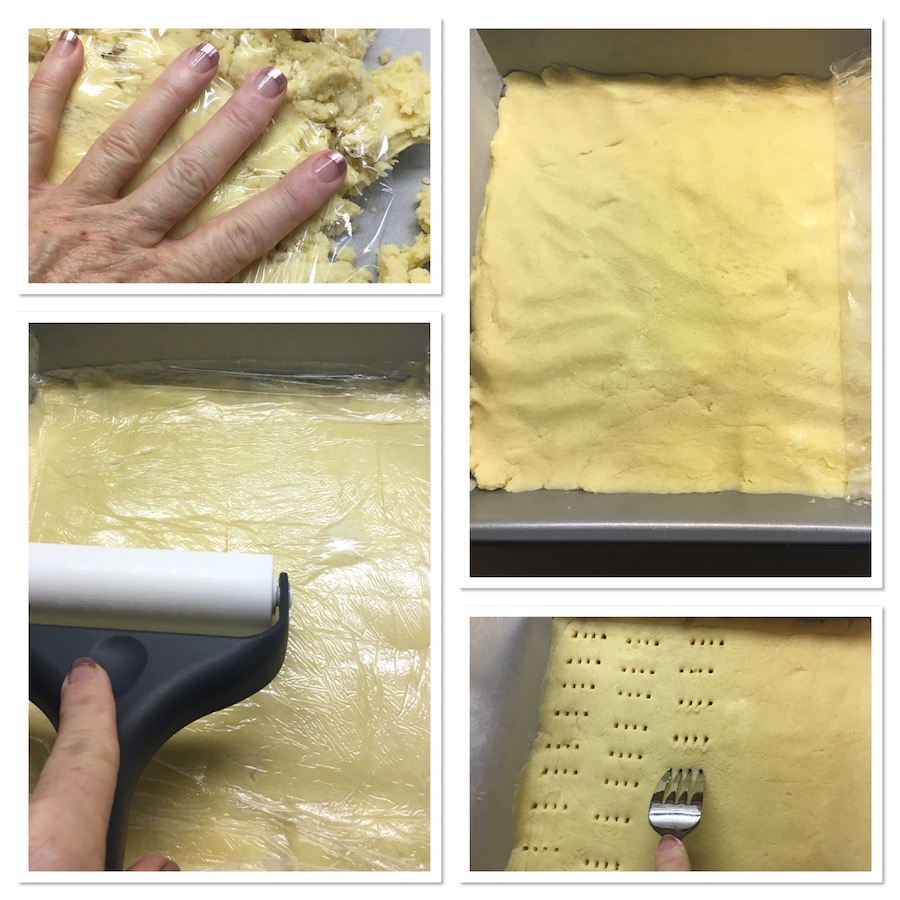 Pat, smooth, roll, and poke…that’s getting the dough ready 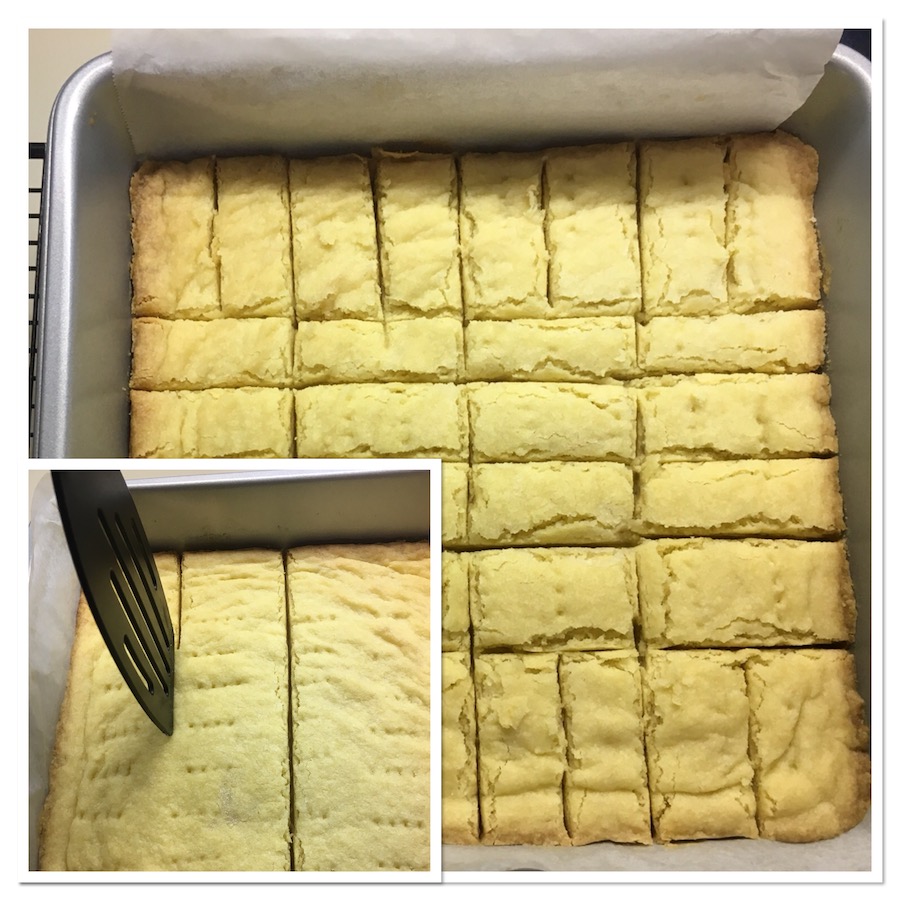 Cut the shortbread just after taking it from the oven 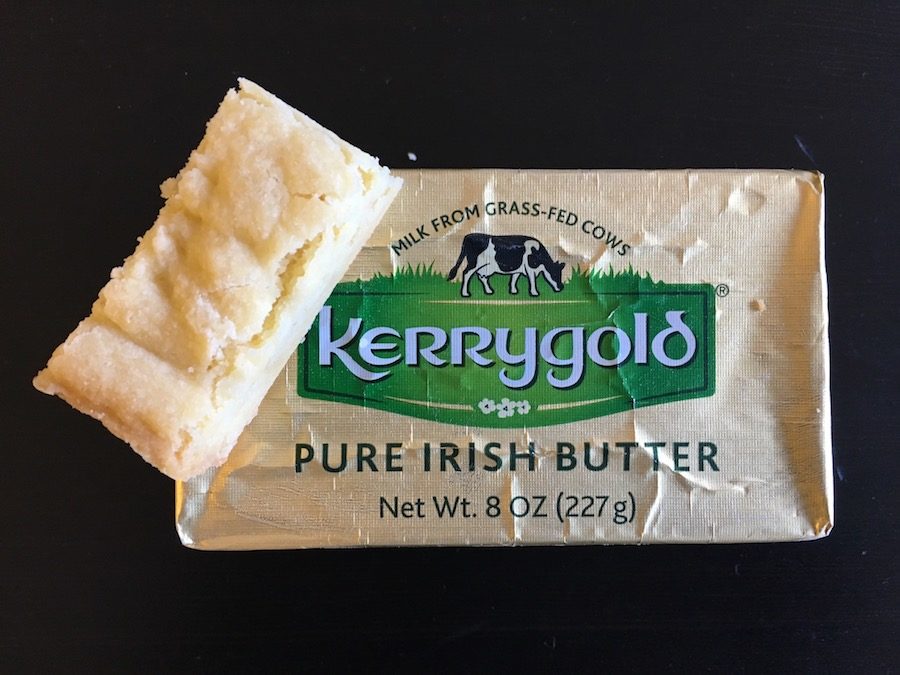 I think my American shortbread would pale in comparison to Mrs. Graham’s lush, rich shortbread (see what I did there? I crack myself up). That’s not to say that my version isn’t good…compared to store-bought versions, mine is divine (and divinely free of additives and preservatives!). Walker’s shortbread is expensive here, so I make my own and freeze them for future snacking. I’m sure Mrs. Graham would approve! 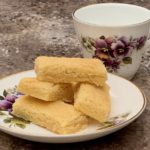 This recipe can easily be doubled, just bake in a 9- x 13-inch baking pan for 30-35 minutes. You can use either unsalted or salted butter for shortbread. If you do use unsalted butter, add 1/2 tsp of salt in with the flour. Here's a video demonstrating the process. Did you make this recipe? Please share your pictures with the world on your social media…tag @outlandercast (on Instagram and Twitter) and use the hashtag #howtheymadeitoutlander. I can’t wait to see your creations!