email
Written by: Anne Gavin
Spoilers Ahead!
Cast and Crew returned to the historic town of Falkland in Fife, Scotland this week to film what could be some of the remaining scenes for Outlander Season 2.  But, this time, we don’t see Red-Coat extras or 17th century tartan skirts and dresses but instead period costumes and props from a later era.  What does this mean?  Zip past the jump to find out!

On track to complete filming at the end of February, the Outlander crew trucks and cast rolled into the picturesque village of Falkland in Fife this week for more filming of what appears to be scenes from Book 2 in Diana Gabaldon’s “Dragonfly in Amber” — upon which Season 2 of the STARZ series is based.  Falkland has been a stand-in for the town of Inverness, Scotland throughout the filming of Outlander Season 1 and Season 2.  And, book readers know that at an unexpected time in the read of Book 2, key characters return to Inverness in the year 1968. 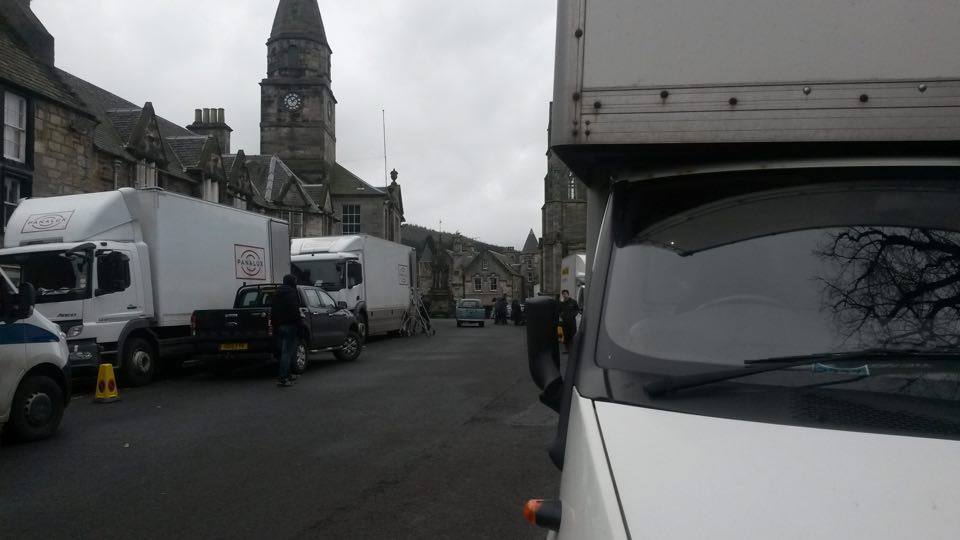 If you don’t know, Falkland was home to the country residence of the Stewart Kings and Queens —  Falkland Palace — and is often referred to as the “Royal Burgh.”  Mary, Queen of Scots, was a frequent visitor at Falkland Palace.  The nearby forests were an excellent location for hunting deer and wild boar which the royals indulged in regularly.  Falkland Palace remains one of the best examples in Europe of French-influenced Renaissance architecture.   And, today, Falkland appears to be the town that time forgot.  Buildings in the small village appear to be unchanged by modern times.   Outlander viewers will recognize the Bruce Fountain — which stands majestically in the center of town — as the spot where we see Jamie’s Ghost in Episode 1, “Sassenach” staring up at Claire at Mrs. Baird’s Inn in 1945. 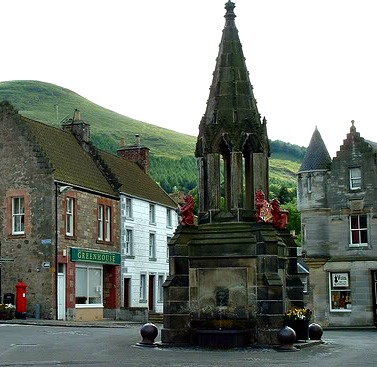 But, it would appear that Falkland/Inverness has jumped ahead from those earlier scenes as filming got underway this week.  We see 1960-era vehicles and extras walking the streets during shooting wearing distinctive costumes akin to the 60s. 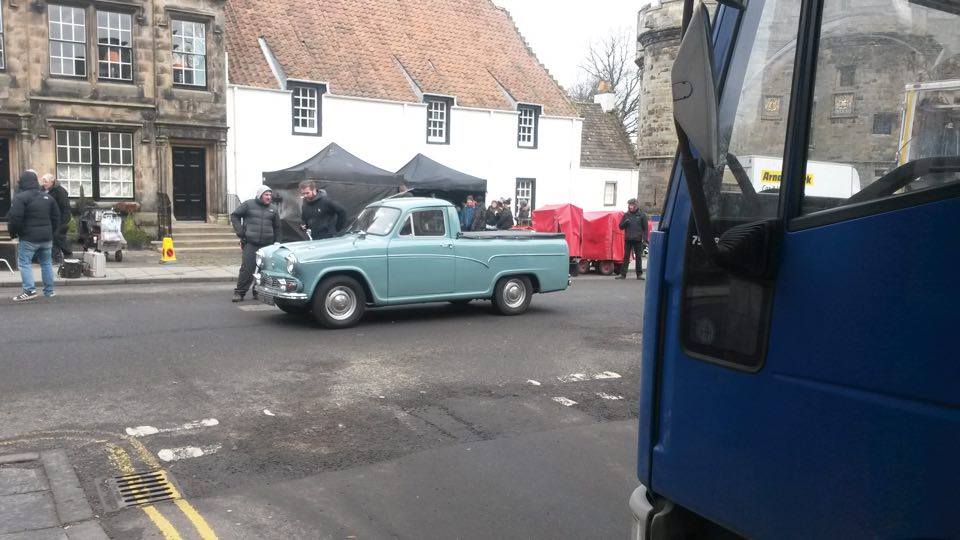 The set is being closely guarded and even the loquacious Outlander Producer, Matt Roberts, has shut down his Behind-the-Scenes daily slide show on Twitter and Instagram indicating he won’t be sending any behind the scenes images until after April 9th — the recently announced U.S. Premiere Date for Outlander Season 2.  Of course, we are all looking forward to seeing both Roger Wakefield, Brianna Randall and Claire Randall Fraser dressed in 1968 period clothes and portraying those pivotal scenes from Dragonfly in Amber.  April 9th can’t come soon enough!

What is the 1968-set scene you look forward to seeing the most in Season 2?

Photos and Video Credit to the intrepid DAVE LAWSON!