How They Made It: Baking Shortcrust Pastry at Lallybroch

Welcome back to our occasional series, “How They Made It,” where we explore the food and drink of Outlander. This time we’re back in Jenny’s kitchen making shortcrust pastry tarts with her and Mrs. Crook. Slainté!

Outlander fans’ expressions of passion for the show

One of the many things I love about the Outlander-verse is how we fans find ways to express our passion for the novels and STARZ show through our interests and hobbies. A quick Facebook search will yield an abundance of jewelry, knitted & crocheted items, signs and signposts, and (close to my heart) blogs and recipes (like mine).

Many of these ventures are sanctioned by Diana Gabaldon herself, and sometimes she even contributes to them. Outlander Kitchen, the Official Outlander Companion Cookbook, is one such venture. Theresa Carle-Sanders’ book (and accompanying website) is a love letter to the novels and the food they inspire. I have made many of the tasty dishes between its covers.

Since this is a “How they made it” post, I thought we’d tackle shortcrust pastry, one of the basic culinary building blocks that Jenny at Lallybroch would be able to make in her sleep (and with the number of children running around, I wouldn’t be surprised if she did!). 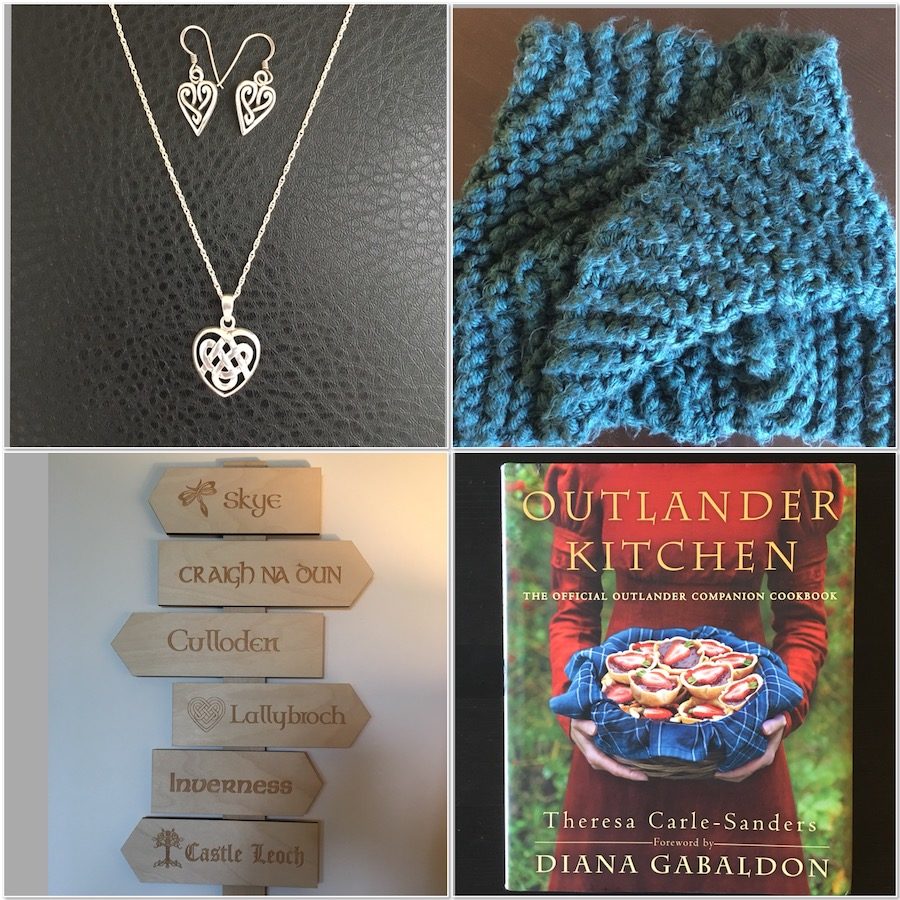 Shortcrust pastry is the basis for many tarts and pies, both sweet and savory. It’s sturdier and more forgiving than basic pie crust because the dough has egg yolk in it to bind it. Yes, you lose some of the flakiness that traditional pie crust provides, but sometimes the trade-off is worth it.

Remember the Hare Pie Jenny made for Jamie when he was still hiding out in the cave in Voyager? That dish probably had a short crust pastry as a base — the stew filling would benefit from the sturdiness of the pastry.

Not only would Jenny have made shortcrust, but I’m sure Mrs. Fitz at Leoch and Jared’s chef in Paris would have used the same technique for many of their tarts and stuffed pastries.

The fat used in making shortcrust dough could be butter (my choice), vegetable shortening (like Crisco), lard (many people’s choice), or something else entirely. I’ve seen recipes with coconut oil (to make it vegan), and I’ve used rendered beef or chicken fat on occasion (for savory dishes).

Adding a little bit of acid (lemon juice or vinegar) helps tenderize the dough. Don’t worry, you won’t be tasting it so which you choose won’t matter. 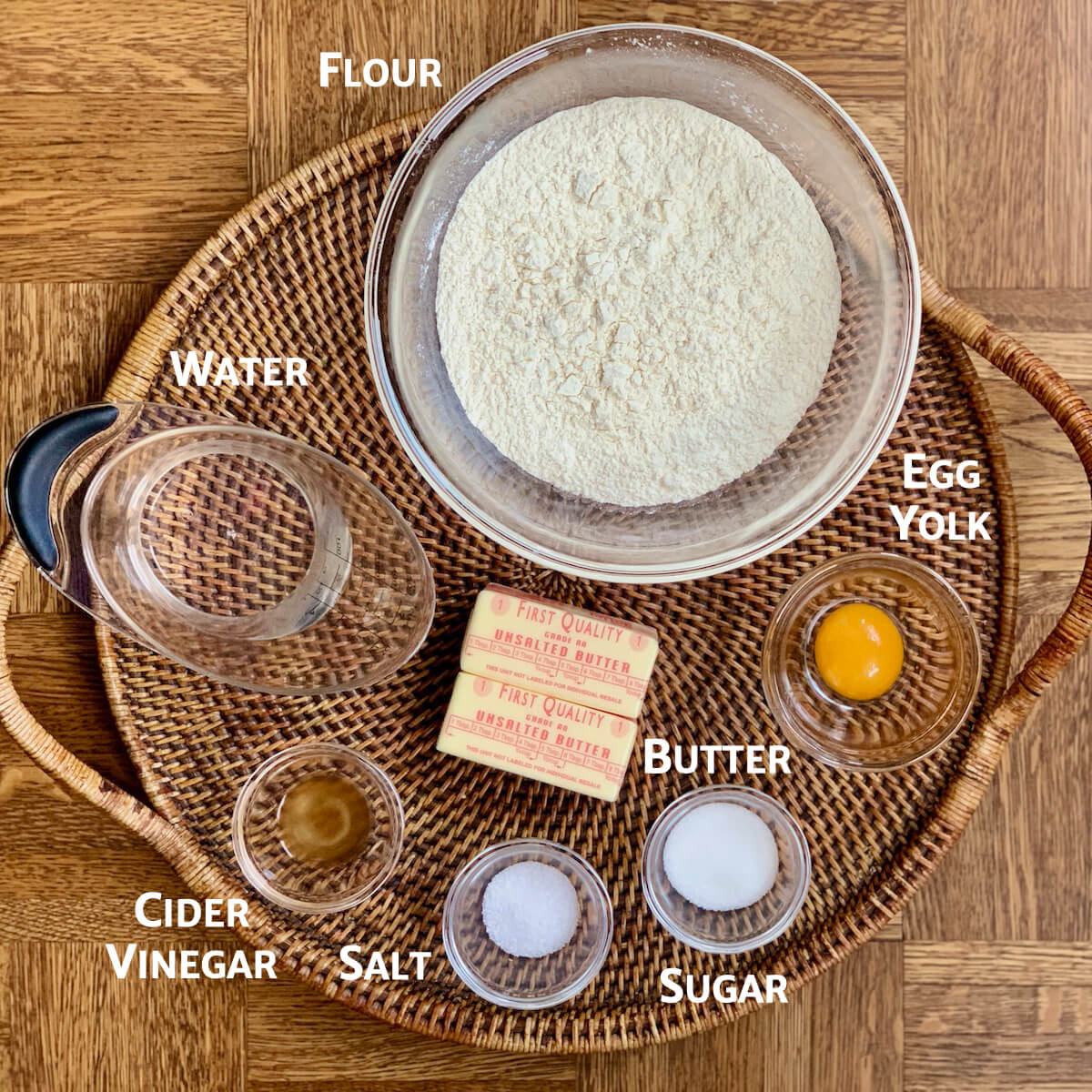 The recipe for shortcrust pastry dough exactly mimics that of pie dough (no surprise there).

Mix flour and salt (and sugar if you’d like), then cut in butter to form pea-sized clumps.

I like to toss the butter into the flour mixture as I grate it. That way it doesn’t turn into a big blob of butter that you then have to cut in.

You can use a standing mixer fitted with the paddle attachment or a food processor to make the dough. Just be mindful to pulse the ingredients quickly and don’t overwork it.

You want that butter to stay cold and to keep the flour from developing too much gluten so the crust will be flaky. 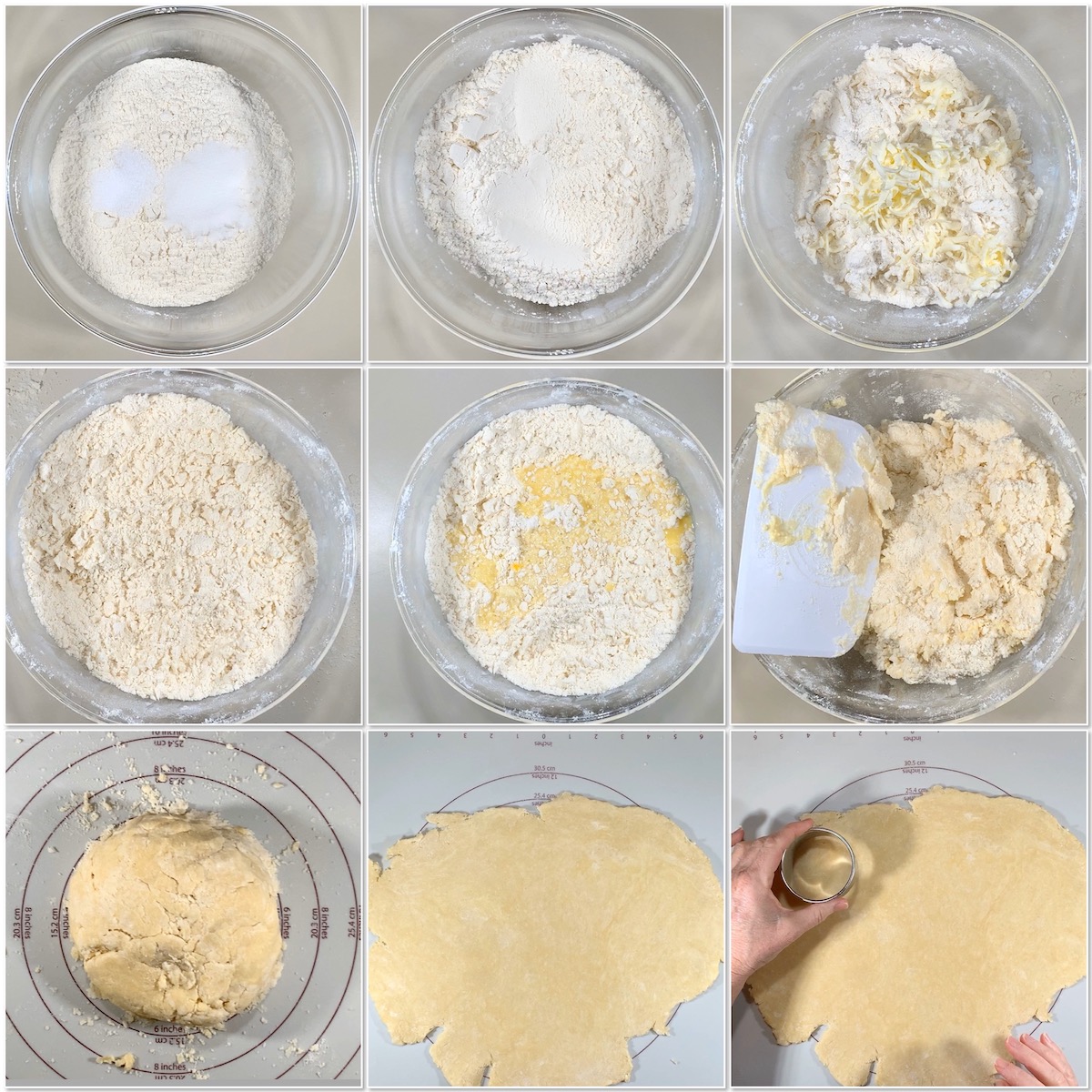 Whisk the egg yolk and lemon juice or vinegar into the water, then fold the liquid into the flour mixture until you get a shaggy dough. Turn the dough out onto a pastry mat and give it a quick kneading to bring it all together.

Squeeze a small amount of dough between your fingers and if it is very crumbly, add ice water, 1 tablespoon at a time (2 tablespoons maximum).

Shape the dough into discs, cover with plastic wrap, and chill for at least 1 hour or up to overnight. You want that butter to get cold again from all that manipulation.

When the dough is chilled, roll it out and use it on whatever pan your recipe requires.

How thick should I roll out the dough?

The best way to roll out shortcrust dough is to use even pressure and roll out from the center in all four compass directions, north, south, east and west.

Turn and loosen the dough occasionally as you continue to roll the pastry out into a circle or square shape (unless, like me, you end up with a blob-shape).

A good thickness starting point is approximately ¼-inch thickness, about the height of two stacked quarters. You can go thicker or thinner based on your recipe. 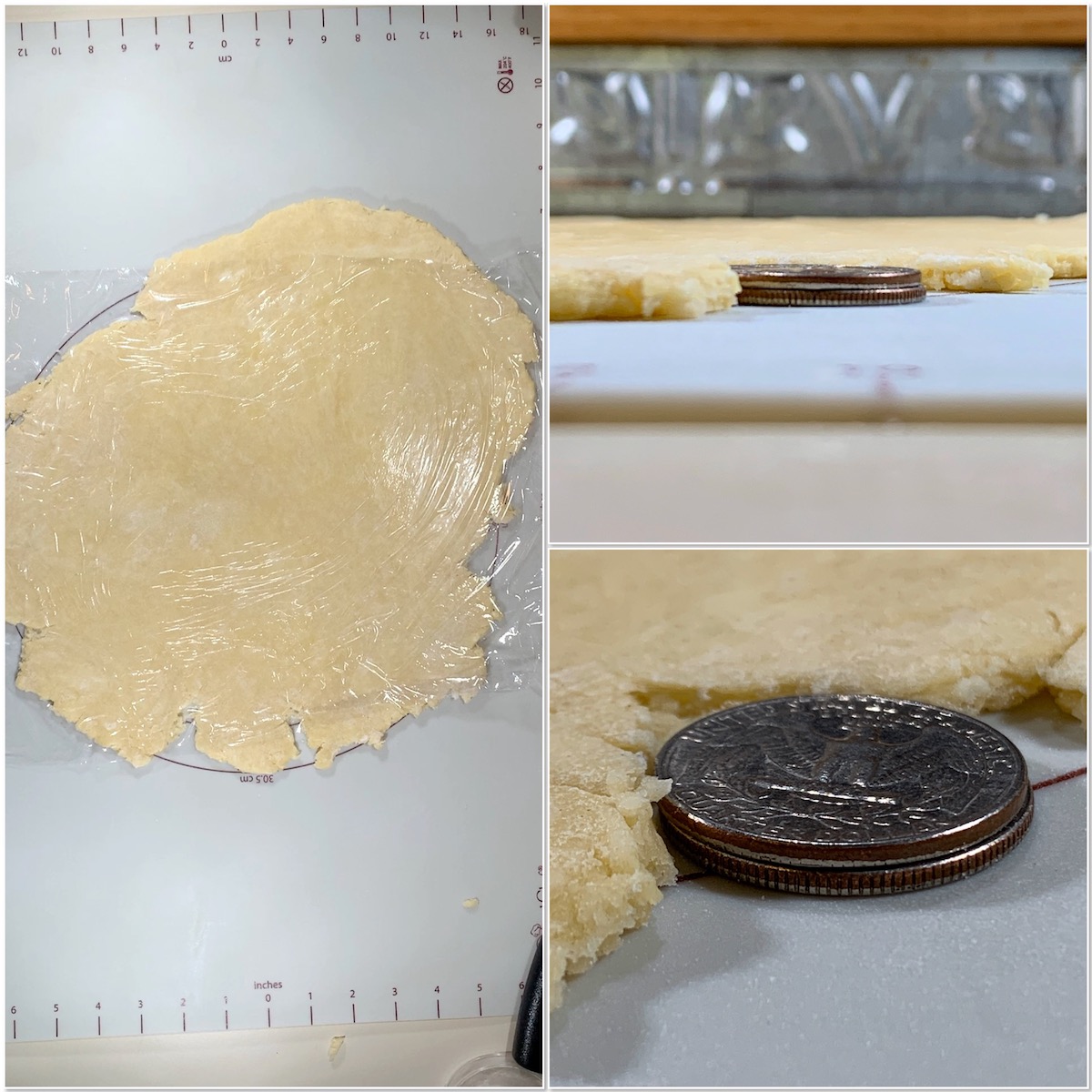 How to blind bake your shortcrust pastry without pie weights

Here’s a trick I learned from Smitten Kitchen to successfully blind bake pie dough and shortcrust pastry. Freeze the crust in its pan tightly covered in foil.

You don’t need to use pie weights or dried beans using this frozen-foil method.

There you have it. No more slumping sides or messing around with dried beans.

I’m all in for that! 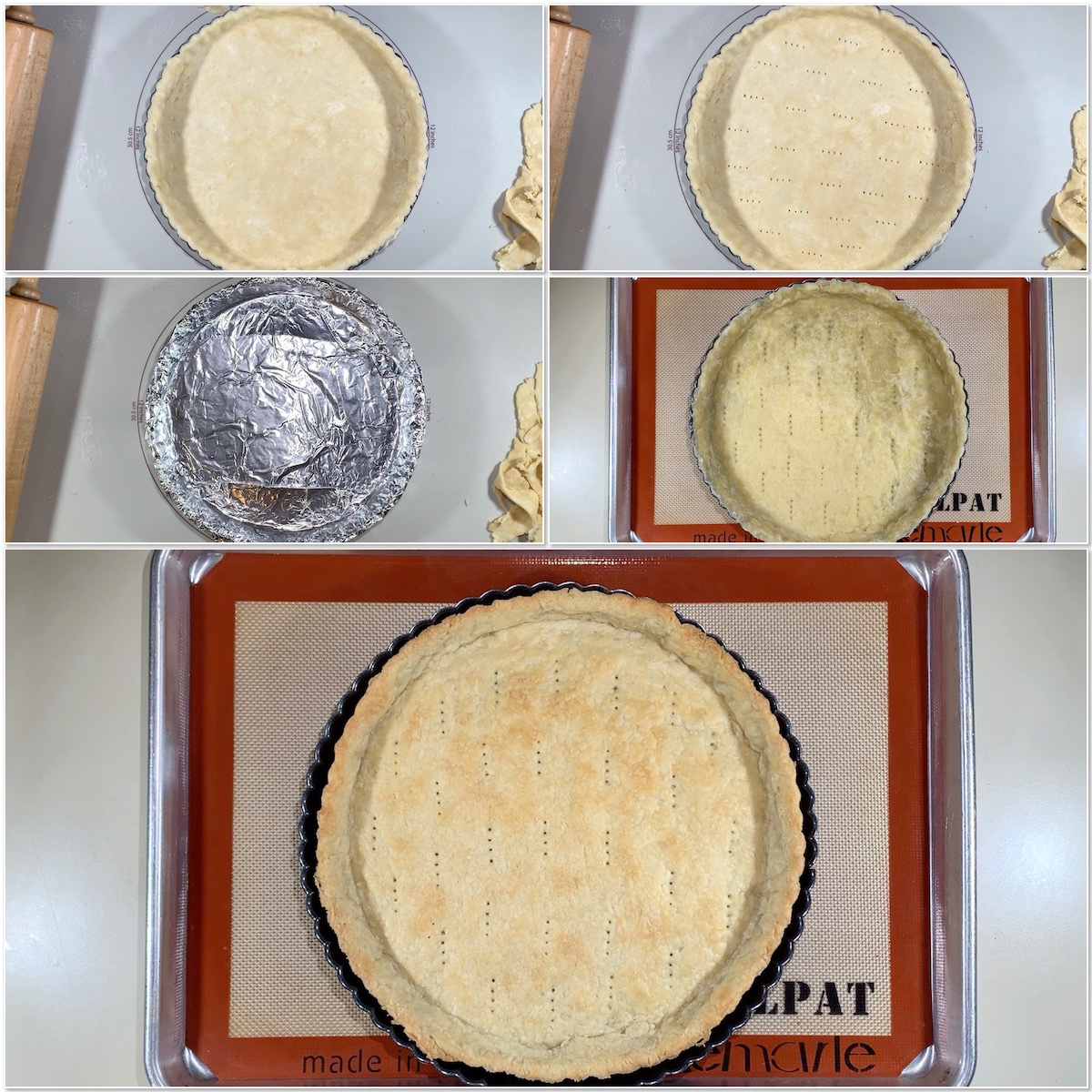 How to make mini tartlets

Mini tarts (aka tartlets) are the younger sister to the full-size version — cute, two-bite treats that are perfect for parties. I recently made these sweetened tart shells using the recipe from the Outlander Kitchen cookbook, then filled half with homemade lemon curd and the rest with dark chocolate ganache. 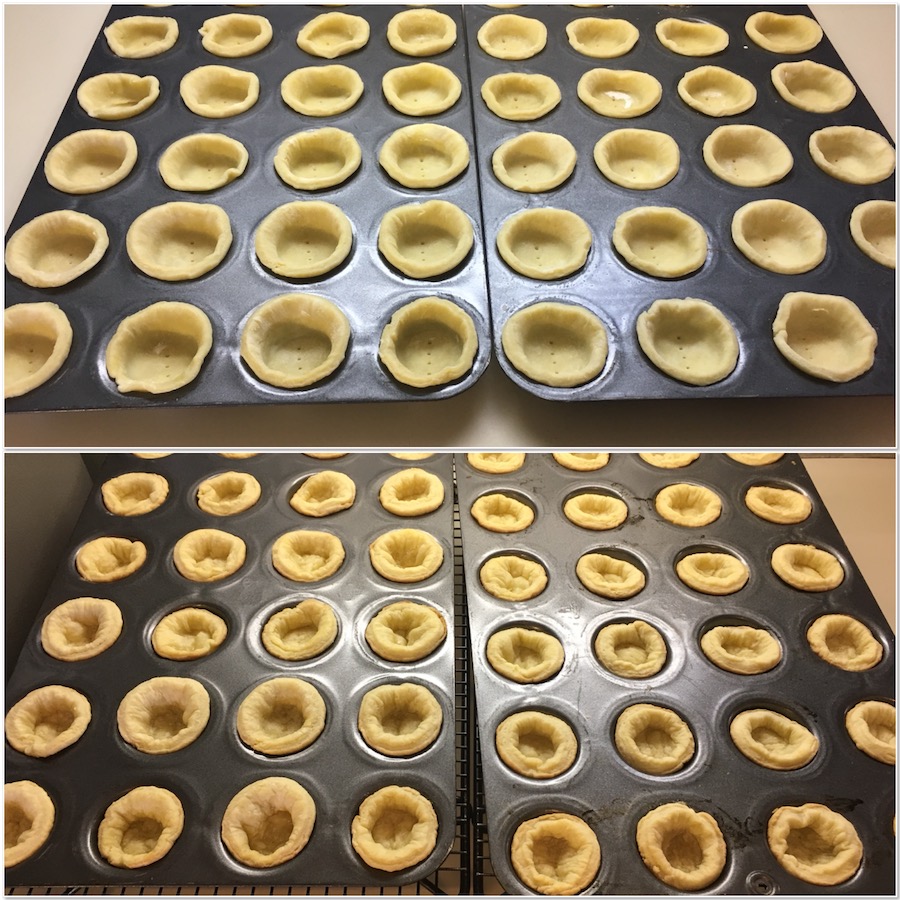 Mini tart shells before & after baking

Mini tartlets just require you to individually cut them out. You’ll need some special tools, like a mini muffin pan and a pastry dough tart tamper to help with the process. 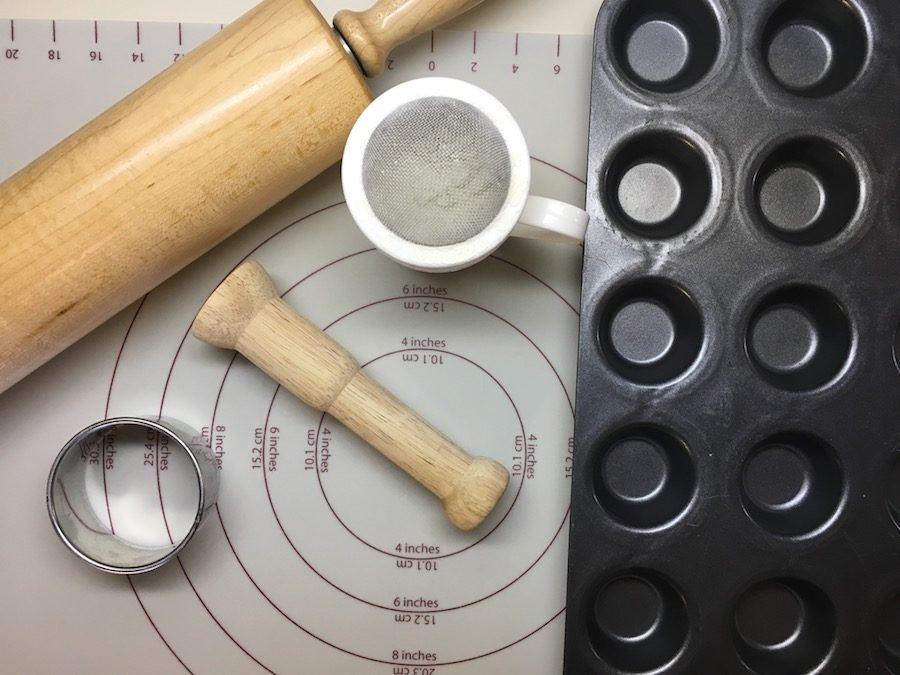 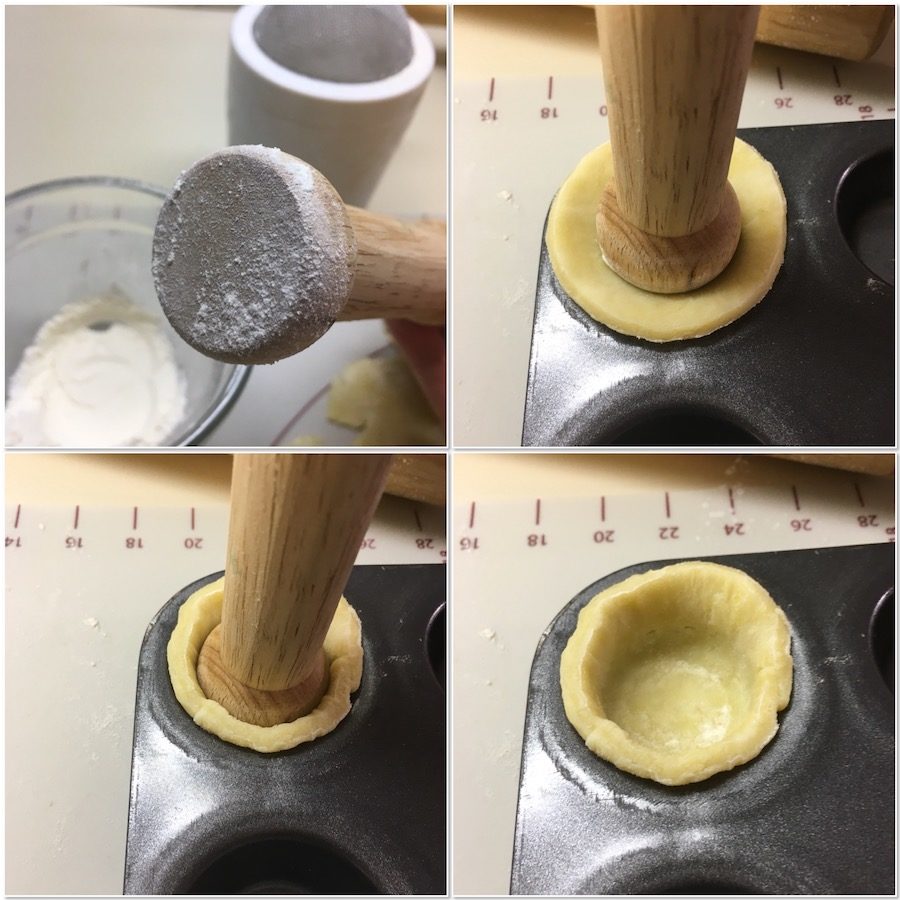 Flour the end of the tamper, than press the dough into the muffin cup 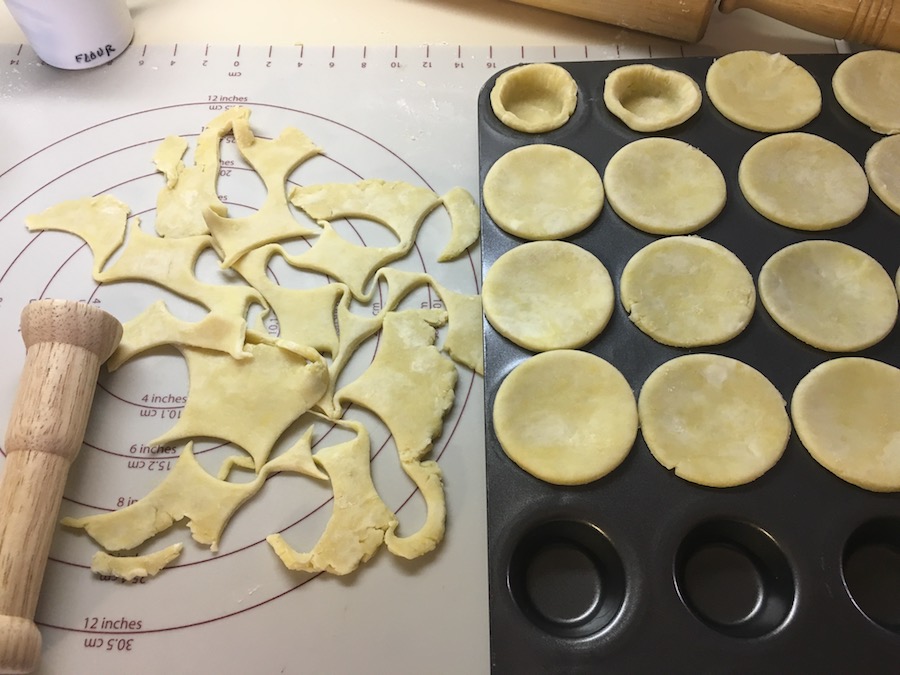 Re-roll your scraps and keep filling those muffin cups 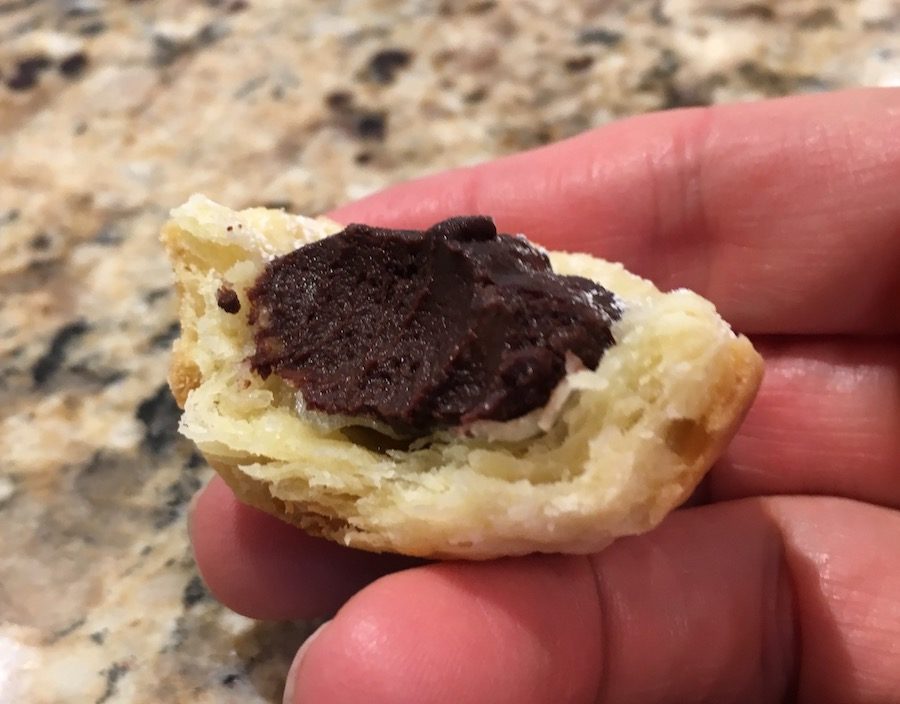 You can make these mini treats, too! Don’t worry, the steps are easy to master (as I said, short pastry crust is quite forgiving)…just follow the tips and tricks provided, and you’ll soon have versatile tart shells of your own to fill as you please.

However you express your love of Outlander, there will be many of us waiting to admire and share your passions.

What is your Outlander-inspired passion or hobby? We want to know and if you have a website be sure to include it in your comments! 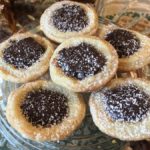 If you prefer to use chilled butter instead of frozen, cut it into small cubes and toss it into the flour. Shortcrust pastry dough can be frozen after Step 5. Just defrost the dough overnight in the refrigerator before proceeding with Step 6. The leftover egg white can be whisked with a teaspoon of water and a pinch of salt for use as an egg wash before par-baking. It won’t result in quite as golden a crust as a whole-egg wash, but it’s a great way to avoid waste. For mini tartlets, spray the cups of two mini muffin pans with baking spray. Roll out the chilled shortcrust pastry and cut rounds using a 2½-inch round cookie cutter. Using a pastry dough tart tamper, push the rounds into the muffin pan cups. Chill the dough for 15 minutes in the freezer or 30 minutes in the refrigerator to firm up (you don’t want slumped tartlet shells). Bake for 10 minutes at 400°F for par-baked shells or 20 minutes for fully baked shells. Allow to cool before proceeding with filling. Makes one 11-inch crust (with extra left over), two 8-inch crusts, or 48 mini crusts. Did you make this recipe? Please share your pictures with the world on your social media…tag @outlandercast (on Instagram and Twitter) and use the hashtag #howtheymadeitoutlander. I can’t wait to see your creations!