Outlander and the Emmys: And the Nomination Goes to…Someone Else

Outlander and the Emmys: Fans everywhere have opinions about why this beloved show deserves all the awards. Here’s a realistic look at why we should prepare ourselves for some disappointment.

Let me start with this caveat: I would love for Outlander the show to get all the awards. It deserves recognition for outstanding production values, incredible acting, wonderful costumes and sets. Outlander deserves to win some Emmys. But as that old Scottish proverb so wisely notes, “if wishes were horses, all beggars would ride.” In other words, fine people, I don’t think Outlander stands much of a chance — at least not in the areas where we fans would really love to see some recognition because let’s face it, the biggies — ie. best actor and actress, and best drama series  — tend to land in the shows that are more easily identifiable and Outlander, unlike, say, The Americans, is always going to be a niche-audience show.

First a bit of chronology. The submission period, where shows submit episodes, actors, etc. to be considered ended June 25. Now all that information will be judged and the final Emmy nominations will be announced July 17, with the actual winners announced in September. STARZ submitted 22 options for Outlander. All told there are 728 submissions this year.

While Outlander has received some awards recognition in the past (Golden Globe nomination for Best Drama Series in 2016, and a Best Actress in a Televisions Series-Drama twice for Caitriona and Critics’ Choice Awards acting nominations for Sam Heughan and Caitriona Balfe), the series has not gotten much Emmy recognition so far. (For a full accounting of what Outlander has been nominated for and actual wins, check this list from IMDb.) The first two seasons only garnered three Emmy nominations: Best Music Composition (2015), Best Production Design (2016) and Best Costumes (2016). Because of the long hiatus between Seasons 2 and 3, the show skipped  the 2017 Emmys (which will sadly impact this year’s nominations, I think).

Here’s the full list STARZ submitted for Emmy consideration and some thoughts on what might actually make the cut and why. Please remember this is written by a fan, not a television critic or industry expert or a psychic. I’m just giving my best guesses. You can certainly disagree. In fact, we love Outlander debates! Let the commenting begin!

Outlander is up against some very tough competition here. While the number of entries in this category this year — 160, yes 160! — is down from 2017’s 180, that is still a lot of shows. Add to the fact that these likely include The Americans (final season), WestWorld, and The Handmaid’s Tale (last year’s winner), as well Game of Thrones (coming back after a break last year so likely to be high on the buzz), Killing Eve from BBC America and Mindhunter from Netflix (which got a lot of interest) and well, Outlander’s chance of making this list seem slimmer by the minute. Don’t shoot the messenger!

Gold Derby has a nice analysis of why it’s unlikely Sam will win (assuming he’s even nominated). It has to do with what they call the “slap-the-stud” bias. In other words, men like Sam (and previously Jon Hamm in Mad Men and even Kit Harrington in Game of Thrones) don’t get taken seriously because they’re too good looking. And this is without even considering the actual talent pool of who’s likely to get nominated. Sam, who I think has improved each and every season as an actor and who had some very strong material to work with in Season 3, will likely be competing for a nomination against Jeffrey Wright of WestWorld, Kit Harrington from GOT, and Sterling K. Brown from This is Us (a winner last year), to name a few. And Matthew Rhys just took a bow on The Americans’ final season, which is often when the judges give a win to an actor in part as an achievement award for work in the series rather than one season. (See Jon Hamm in 2015 for the final season of Mad Men.) I think Sam’s nomination chances are even slimmer than the series as a whole. Sad but true.

Catriona has already won a bunch of awards — Best Actress in television by the BAFTAS in 2016, for instance, and People’s Choice Best Actress in 2016 and 2017 — and she has been nominated for a bunch, including three times by the Golden Globes for Best Actress. She certainly had an amazing Season 3, as well. It’s likely she’ll be up against some tough competition, though. Elisabeth Moss won for The Handmaid’s Tale last year and Emmy buzz already has her on the list to win this year. Keri Russell, meanwhile, had an amazing turn in the final season of The Americans, as did Claire Foy for Season 2 of  The Crown, and this might be her last shot at recognition since the series has cast a new, older actress to play the lead role now. Caitriona may get a nomination nod, but winning? Not likely, especially since the Golden Globes and Emmys in recent years have often echoed each other. Streaming shows have reigned supreme recently (The Crown and Mozart in the Jungle are just two examples.) 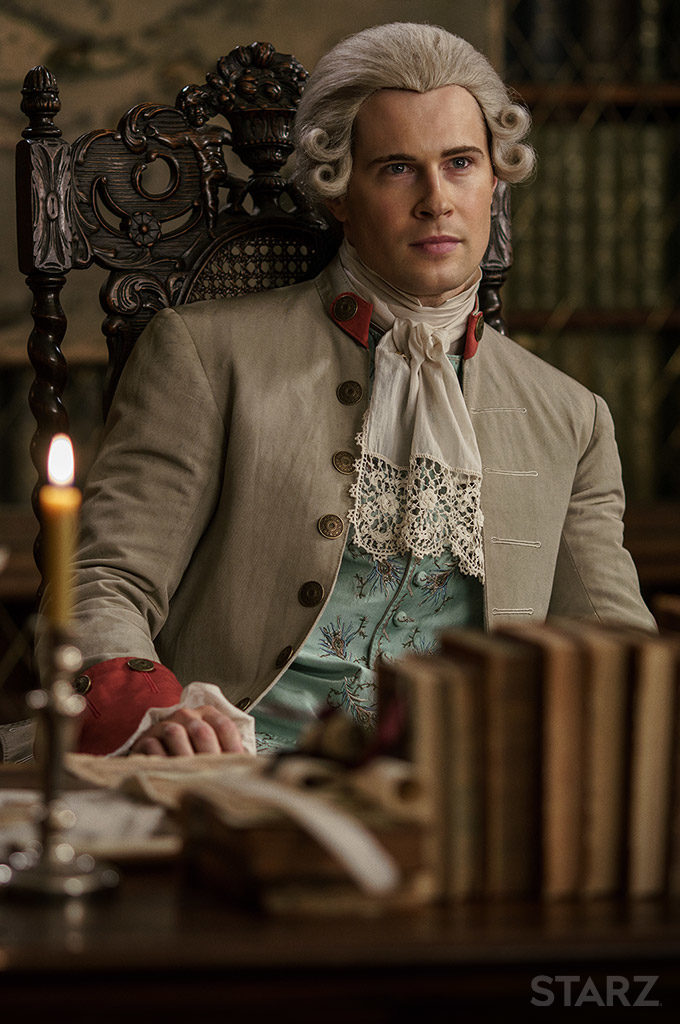 Not sure why STARZ decided to have its own actors compete against each other in a category that will have a lot of other contenders.(Peter Dinklage of GOT, Noah Emmerich for The Americans, James Marsden in Westworld, to name just a very few in a large, likely strong field). Having three from the same show in the potential mix will likely work against all three of these wonderful actors. While I love Richard as Roger, it’s way too soon to toss his hat in the ring. His real turn is coming in upcoming seasons, as book readers know. It’s a toss-up between both David and Tobias. Both are wonderful actors. Unfortunately, Tobias is likely going to be the loser here because he only appears in three episodes this season that don’t really have the gravitas associated with his acting in seasons one and two. His moment for serious consideration was Season 2 — the pregnancy announcement scene! the final moments as Black Jack Randall! So if — and it’s a big if — one of these actors makes it to the nomination cut, David stands a better chance. Even David’s seems a bit premature, though, given that he, too, was only in three episodes. I’m thinking none of them get a nomination and certainly no one gets an award.

While many in the fandom are skeptical she has the acting chops to make this role sing the way the rest of the cast does, the reality is she hasn’t had enough air time to show what she can actually do. Her chance to really shine will come in seasons 4-6 storylines. That’s when STARZ should submit her. And this is without even considering the strong competion like Chrissy Metz from This is Us, Ann Dowd from The Handmaid’s Tale and Margot Martindale in The Americans.

Again missing season 2 hurts Duncan’s chances here. Yes, it was wonderful to see him alive (an unexpected twist from the book that even book purists have a hard time arguing about) but he hardly does anything in season 3. I doubt he’ll make even the nomination cut. There’s just not enough of him to evaluate.

Blood bath scene aside (which, of course, was awesome), Lotte really is just too campy in this role to be seriously considered. I just don’t think it will compete with other drama series actresses.

I love Matthew B. Roberts. I really do. I think he’s got Outlander’s back and that he has written some amazing episodes for this series. This was his first directing moment in the show, though, and it wasn’t the best episode. It just wasn’t. So many other directors in Outlander itself should have gotten the nod first from this season. Brendan Maher anyone? He directed “Freedom & Whisky,” “Of Lost Things,” “All Debts Paid,” and “The Battle Joined.” And this is without considering other directors likely in the competition, such as David Lynch in Twin Peaks, Miguel Sapochnick in GOT and David Fincher for Mindhunter. Need I say more?

These are both solid scripts to this non-screenwriter. “All Debts Paid” was written by Matt B. Roberts while Toni Graphia wrote ”Freedom and Whisky.” These are solid writers who understand these books and how to bring them to the small screen. Can they compete against whatever other episodes are put out there? Who knows? But they deserve nominations in general.

Suzanne Smith casts Outlander clearly  and is a genius. Has she cast a single person who wasn’t anything other than perfect? End of story. Nominate her and give her the award.

Again, season 2 was the season where Terry Dresbach and her crew outdid themselves. Those Parisian dresses alone would have been enough to get a nomination if not a win. Terry nailed the ’60s garb, too, and it was fun to see the Bat Suit being made. Is it stunning enough to get the nomination and then a win? Maybe. Fingers crossed for Terry.

We love the hair in this show and think  the people who do it are wizards. I might have thought submitting an episode with ’60s Claire would be more obvious but I love aging curly Claire too so maybe that will do the trick. Maybe they figured competing against Keri Russell’s Cold War look was too similar.

I don’t know enough about this to weigh in.

I’m admittedly a Christmas fan so what Jon Gary Steele and crew did recreating a ’60s Christmas in Boston was just perfect. Add to that a hint of the print shop at the end of the episode and I think this one has a good shot for at least a nomination. 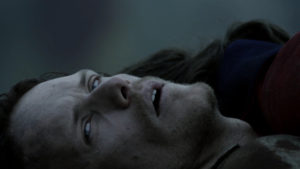 Yes, yes and yes. The breathing alone makes this a good choice.

Even a novice can see that this was an amazing episode to pull together. That wave! It certainly seems worthy for a nomination.

Well, this show certainly has its share of stunts including some amazing water scenes in this season so maybe that will do the trick.

So there you have it. My best guesses on what stands a chance and what likely doesn’t. Where do you think Outlander will land in the Emmy nominations and then in the final winners’ circle?