Outlandish Locations: Time Travel back to Culross and Explore its History

The latest in our Outlandish Locations series explores the picturesque village of Culross, home of fictional “Crainsmuir” in Outlander Season 1. We detail the history of the town as well as the character Scotland continues to play in the Starz TV series.

If you are familiar with Outlander, you will know that Scotland serves as essentially its own *character* in the show. For all of Season 1, half of Season 2 and more or less of Season 3, the scenic vistas and breathtaking landscapes of the Scottish Highlands and coasts fill our soul and have caused more than a few fans to long for a trip to Scotland to experience this magical land for themselves. The television series has also showcased many of the country’s finest historical locations, leading to an enormous boost for the Scottish tourism and hospitality industry. But, it’s as important—or more important—to understand and appreciate the history of these locations beyond their role in the Outlander saga.

It’s why Outlander Cast brings you another in our “Outlandish Locations” series highlighting the history and the lore of Outlander filming locales. Perhaps this series of ours is even more important now that Season 4 of Outlander  will be set far from the shores of bonny Scotland—at least fictionally. So, it is with love and maybe a bit of nostalgia, that we next take a look at the picturesque village of Culross, also known as the fictional “Crainsmuir.” Catch the history bug and get ready to step back in time as we explore this Outlandish Location.

Show watchers will recall that Crainsmuir was the home of the mysterious Geillis Duncan, Claire Randall’s first “18th century friend” and resident eccentric. Crainsmuir attracted a lot of Season 1 drama, serving as the setting for many a sensational plot point including Claire’s attempt to cure young Tammas Baxter, Father Bain’s exorcism of the young lad, the nailing punishment of the tanner boy at the town pillory, and Claire and Geillis’ arrest for witchcraft. 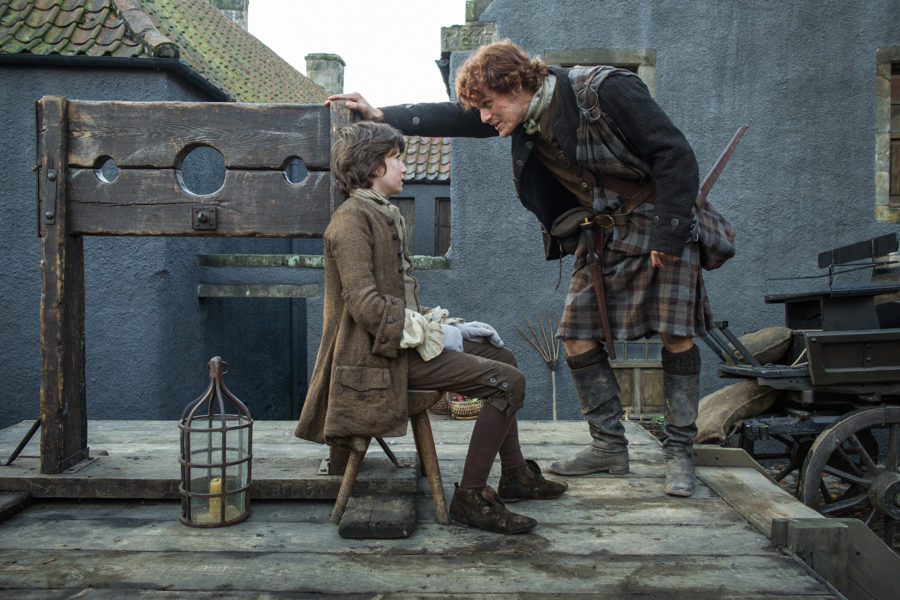 The Royal Burgh of Culross (pronouned “Coo-ross”) dates to the 6th century when it was believed that one of Scotland’s most well-known saints, St. Mungo, was born there. You may have heard of Mungo if you ever had occasion to visit the Glasgow Cathedral where a shrine exists to him. He was one of the founders of the City of Glasgow where he began a missionary on the site of modern day Glasgow at the young age of 25. He built his church on the same site where the present medieval cathedral now stands. But, it was in Culross where he was raised by Saint Serf, another celebrated Scottish saint and founder of the village of Culross. Serf taught Mungo his ministry while serving as his foster father.

Culross sits alongside the Firth of Forth and almost directly across the Forth from Edinburgh in what is known as the Kingdom of Fife. Culross was once a busy seaport up until the 18th century. But, it was during the 16th and 17th centuries that the village became the center of the coal-mining industry when Sir George Bruce established a coal mine in Culross. Bruce was a Scottish merchant and engineer and, it turns out, a great innovator. Bruce’s coal mine wasn’t just any mine. Bruce built the first coal mine in the world to extend under the sea through the use of a Moat Pit. The mine was considered one of the marvels of the British Isles until it was destroyed in a storm in 1625. But, prior to that, this innovative technique attracted the attention of King James VI. At the invitation of Sir George Bruce, James visited Culross to see the mine for himself. The king ventured into the tunnel that extended out into the Firth of Forth until reaching the shaft point where the coal was loaded into the ship. When he found himself surrounded by water at the top of the shaft, he accused Bruce of trying to kill him, leveling a charge of treason. It is said that Bruce quickly pointed out the row boat tethered to the top of the shaft and instructed the King he could use that or return through the tunnel the same way he came. The King opted for the row boat and Bruce narrowly escaped being hung, drawn and quartered! 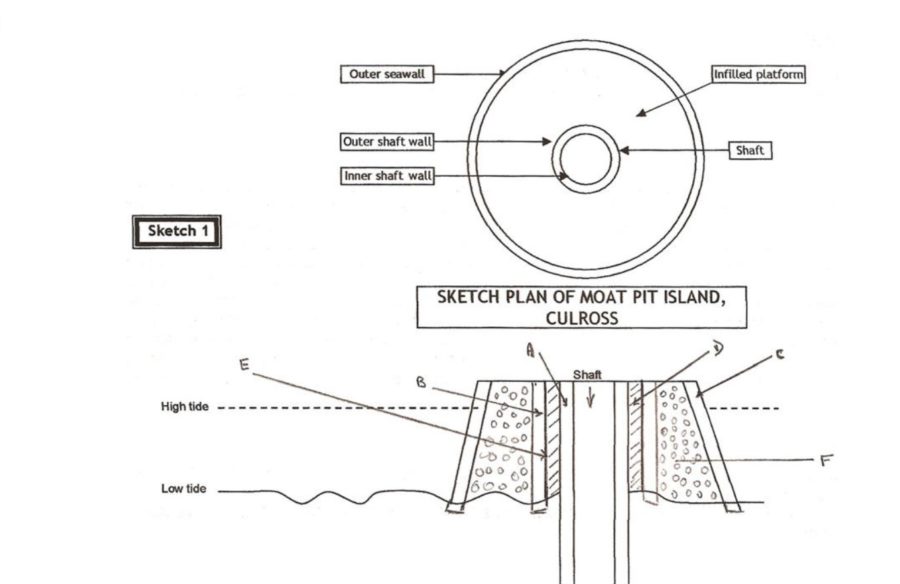 Dept. of Archeology, University of Glasgow 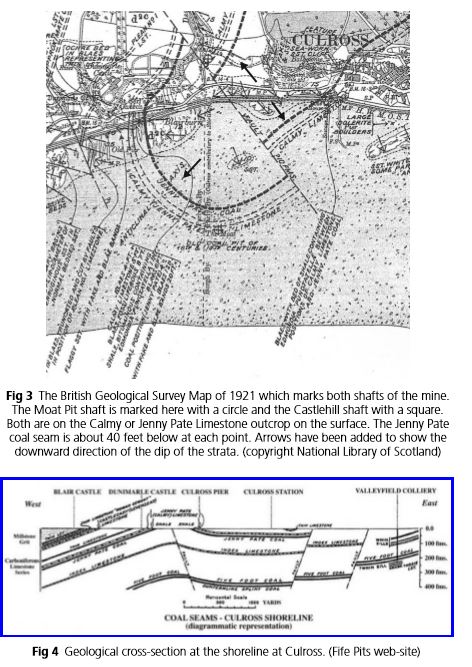 Dept. of Archaeology, University of Glasgow

Salt panning also flourished in Culross. Many ships came in and out of the harbor trading salt and other products. One of Culross’ striking physical features are the many red roof-tiled homes thought to be the direct result of ships returning to Culross’ port with Dutch roof tiles as ballast. Eventually the maritime industry waned in Culross and the port and village became a “ghost town.” The harbour was filled in and the sea cut off by a coastal railway line towards the latter half of the 19th century.

Interestingly, Sir George Bruce was also responsible for another prominent Culross feature. Bruce built the mansion house using materials from his foreign trading. Later the house became known as Culross Palace and is known for its distinctive ochre colored exterior walls. Behind the palace are ornate herb, vegetable and flower gardens that extend up the hill. The gardens in Culross also substituted during Season 1 filming for the “gardens at Castle Leoch” where Claire would go to gather her wee herbs. The gardens have now been meticulously restored. If willing to make the rather steep climb up through the gardens behind the palace, you are rewarded with some beautiful views across the Firth and all the way to Edinburgh—on a clear day, of course! I understand, as well, that visitors to present day Culross can purchase freshly grown herbs, fruits and vegetables from the now fully restored organic gardens. 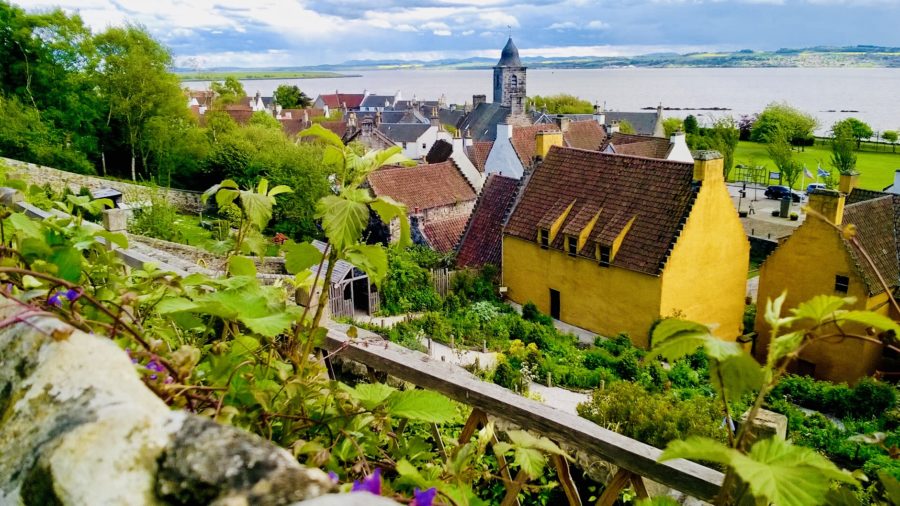 Another quite old building that you see almost as soon as entering the village is the Culross Town House. Erected in 1626, the Town House served as the legal center of the village. It was alternately a courthouse and a “witches prison,” making the Geillis story line in Outlander that much more interesting! It was said that in the 1600s when witch hunting was at its peak, so many “witches” were rounded up that the Town House/Courthouse ran out of room to house them all. The Town House now serves as the home of the shop for the National Trust for Scotland, which took on the preservation and restoration of the village in the 1930s. In addition, it also houses the work of a wonderful Scottish photographer, Graham Harris. Graham exhibits some of his fine art photographs, including a stunning collection featuring iconic Outlander locations from across Scotland. Prior to moving his exhibit to the Town House, Graham housed his collection of photographs at his home in Culross, known to be one of the oldest homes in the village located near Mercat Square. You may recognize Mercat Square as the site of the pyre upon which the townspeople were preparing to burn Geillis and Claire as witches. If you happen to catch Graham at the gallery, ask him about his numerous encounters with some ghostly residents who seem to like to hang about the Town House making scratching and banging noises. If you are lucky, he might tell you a few spine-tingling tales. 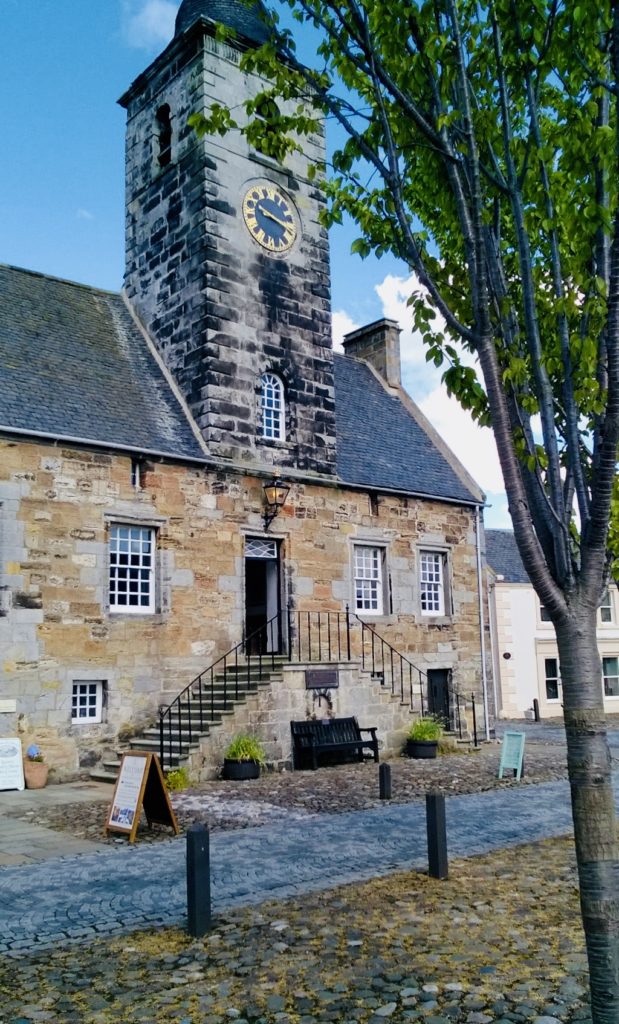 One other landmark in Culross not to be missed is the Culross Abbey. The abbey was established in 1217 and was likely built atop the remains of the church founded by Saint Serf in the 6th century. The abbey was home to a group of monks who came via Kinloss Abbey. By the 15th century, most parts of the west part of the abbey had been abandoned and fell into ruins. Sir George Bruce, however, converted portions of the abbey into a tomb house. Many of the alabaster carved effigies of Bruce, his wife and eight children can still be seen there today. The portion of the abbey that remains intact is used by the Church of Scotland as the local parish church. Historic Scotland maintains the ruined portions. 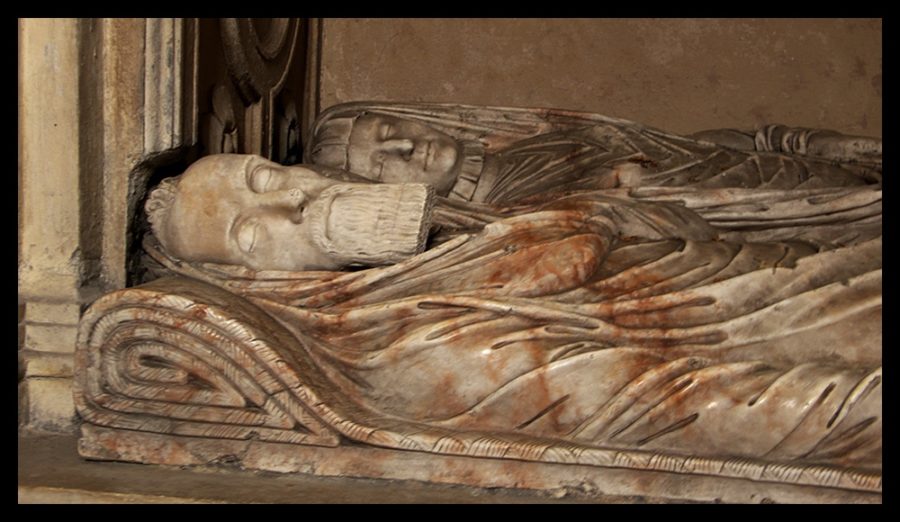 Lastly, just outside the village lies the ruins of the West Kirk Church and graveyard. Outlander  fans will recognize these substantial ruins as the scene where Jamie and Claire go to find the wood garlic, which the Baxter boy ate resulting in his sickness. Unfortunately, I did not make it to this spot when I visited Culross. So, of course, this necessitates a return visit in the very near future! The West Kirk was the former Parish Church of Culross later superseded by the Culross Abbey. However, burials still took place at the West Kirk up until the 19th century. I love a good ruin and when combined with a graveyard, yep…what is not to love?!

Regardless of its significant role in Outlander, the village of Culross is perhaps one of the most fascinating and historical locations in the Kingdom of Fife. You will almost feel as if you have stepped back in time given how much of the city remains as it was hundreds of years ago. When visiting, take time to walk the cobblestone streets and admire some of the original buildings, imagining what may have gone on there, so many years ago. Spend time talking to shop keepers or residents or walking along the port/dock area and thinking about the obstacles Sir George Bruce must have encountered when building his innovative and ahead-of-its time coal mine. You will be the better for seeking out more than just the obvious locations you recognize from Outlander.

Have you ever been to Culross?  What surprised you the most about the village? What are some other Outlander locations you would like to know more about?

Check out another in the “Outlandish Locations” series all about Blackness Castle—a.k.a. Fort William here.