Who’s Your Daddy? A Look at Surrogate Parenting in Outlander

Is surrogate parenting in Outlander one of its many themes? Absolutely. Here’s a closer look at who’s parenting whom in Diana Gabaldon’s popular series.

Diana Gabaldon’s story crafting tugs on my heartstrings, boosts my endorphins and generally makes me clutch my chest in wonderment. Throughout the STARZ adaptation of Outlander, these feelings resonate within the many themes woven into the story. These include identity, loyalty and betrayal, faith, separation, and deep loss. Again, and again, the theme of surrogate parenting is a part of that fabric, and I’ve been fortunate enough to have had two opportunities to ask the author to explain it.

The first time, it was at a small dinner meet up arranged years ago and held at the now-shuttered and much missed St Andrew’s Scottish Pub in New York City. I asked Diana about surrogate parenting in her stories…and then my foolish star-struck brain glazed over and I have no recollection of her response. The second chance was a gift, since it’s on YouTube and therefore memorialized for my foolish brain.

“Simple logistics” was Diana’s initial short response to the question: too many relatives make it too complicated. There is no Auntie Em waiting at home wringing her hands; in Claire’s case, there’s just a bewildered Frank. It’s a jumping-off place for a skilled author to tell the tale, but for me, it’s not so simple. Let’s take a closer look at some instances of surrogate parenting in Outlander, because it sure does happen a lot.

Orphaned at five years of age, Claire’s nomadic upbringing by her archaeologist uncle prepares her for roughing it in the 18th century and living without electricity and indoor plumbing. I’ve lived for a time without both, and believe me, you will get tons more sleep, and you can still be clean. You can also still have a vase, although Claire never has one of those for herself. Claire’s experiences as a combat nurse, where the lives of the soldiers and medical staff precariously teeter on both skill and luck, further magnify the insignificance of material comforts in her life. We don’t get to see much of Uncle Lamb, but that single moment where girl-Claire lights up a cigarette for him (and sneaks a puff for herself) gives a hearty glimpse into his approach to child-rearing: Never mind convention and childhood things—there is a fascinating world that needs to be studied! Claire is his equal in many things, and she grows into an autonomous and brave woman. Good job, Uncle Lamb!

Ahead of her time for the 1940s, Claire poses an even more marked contrast to the station of women in Jamie’s time. While appreciating the turn of events that bring Claire and the The King of Men together for an ever-lasting love, I can’t lie and say that thoughts of salted meat, deer entrails, and waulking wool in *someone’s* urine did not give me pause. Uncle Lamb gave Claire the tools to survive and be self-sufficient without material trappings or a stereotypical female identity, yet at the beginning of episode 101, the idea of Claire coveting a vase of her very own shows she is finally ready to leave her nomadic way of life behind. Maybe. 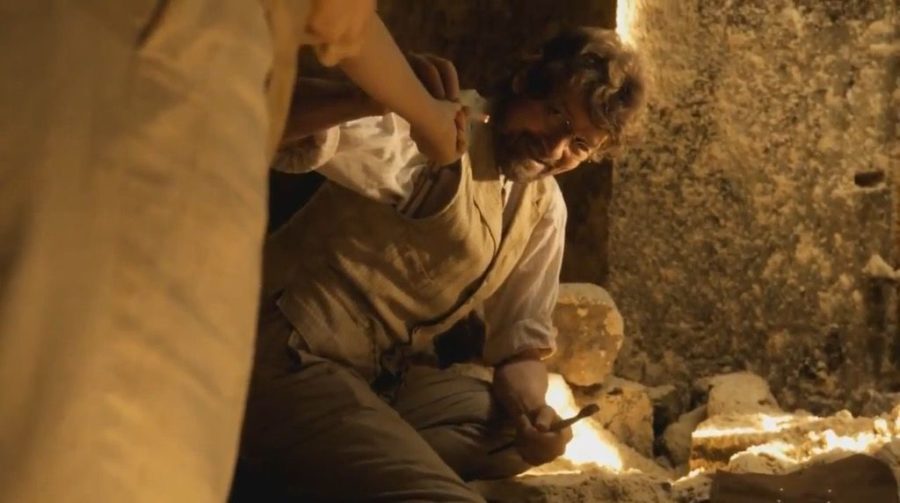 Roger and the Reverend Wakefield

Wee Roger is adopted and adored by his uncle the Reverend Wakefield after Roger’s parents are both lost in World War II. Nature and nurture cooperate, and Roger the man has a number of positive traits surely cultivated by his uncle: depth of character, gentlemanly behavior, somber appreciation for history, and an irresistible wit. Sweet-tempered Roger grows up to be a scholarly historian type with the kind of accent that makes girls in the 1960s swoon. Roger’s upbringing was clearly more traditional than Claire’s, but both were raised by somewhat distracted academic types; their respective surrogate parents both valued ancestry and civilization, and the preservation of  the history of those before them. Following the good Reverend’s death, what better way for orphaned Roger to bond with half-orphaned Brianna than to sift through dusty genealogy files, finding clues to their respective family mysteries? 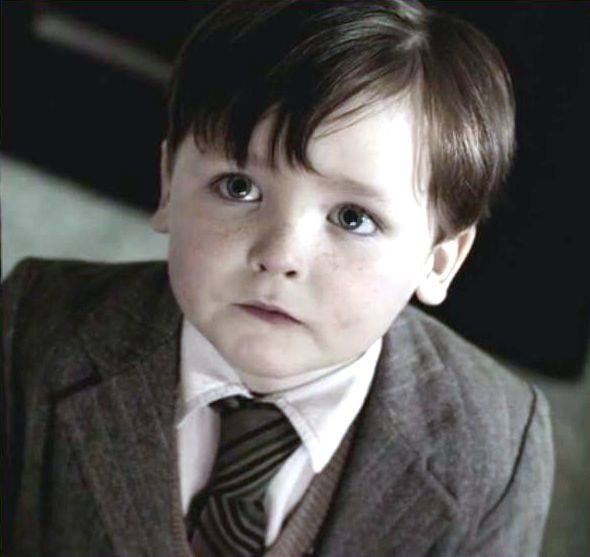 With resolve and a breaking heart, Jamie trustfully yet begrudgingly gives his unborn daughter over to Frank’s care. Frank embraces his role as father to Brianna, despite wordlessly knowing that Bree’s very existence elicits Claire’s memories of Jamie every single day. When Claire returns from 200 years in the past, Frank strives for simplicity to complete his world, but his marriage to Claire strains under his demands and Claire’s need for purpose. The promise that Frank exacts from Claire to withhold the truth regarding Bree’s paternity serves Frank well, but causes both Claire and Bree a world of pain later. Brianna is well-loved and seemingly well-adjusted until her world is understandably upended when she learns about Jamie Fraser. Show watchers are beginning to get glimpses of what Frank may have known about Claire’s life in the 18th century and what may be in store for Brianna. Book readers and show watchers alike are anticipating the moment when All Will Be Revealed on that particular topic. Hence, I believe that Frank Randall isn’t completely going away just yet. 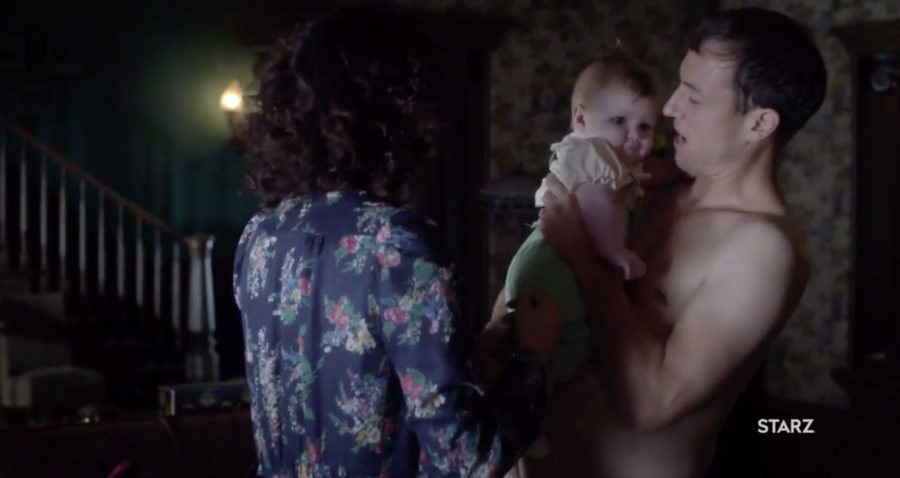 The child Claudel is born and raised in a brothel, knowing that his own birth mother may be among the women there, or perhaps long gone. In a house filled with surrogate mothers, none have claimed him. Wise beyond his years, with street smarts and Parisian practicality, he fends for himself. Jamie takes him in, gives him the more “manly” name of Fergus, and entrusts him with various tasks (often illegal!), and mentors him in (often illegal!) business acumen and personal integrity. At the hands of Black Jack Randall, though, we learn the extent to which  Fergus’s life experiences have taken him. This is a turning point for Jamie and for Fergus, where being under Jamie’s protection takes on a deeper and more complex meaning for them both. Jamie claims Fergus as his own through caring steadfastness, respect and masculine identity and leadership. Jamie is at first his employer, then his savior, and ultimately, his father. Yep, it’s those “simple logistics” that make me cry as I write this. 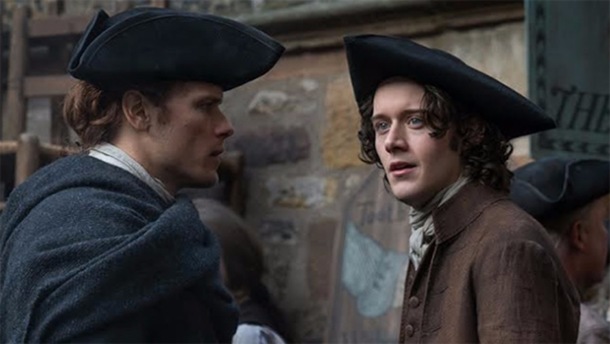 The circumstances of Willie’s early childhood are different than the others. He has his father by his side—but he doesn’t know it, nor can Jamie acknowledge it openly, to anyone. Moreover, Jamie has shot dead Willie’s future but never to actually be—surrogate father—oh, the irony! From the moment Jamie rescues the newborn Willie from the inebriated and soon to be dead Ellesmere, Jamie’s heart is in grave danger. Jamie’s heart is still entwined with that of the child he has sent away those years ago, still blessing it multiple times a day; but how bittersweet it is for him to have that loss compounded by Willie’s knowledge of Mac as only a beloved but subservient groom. This is made all the sadder by the knowledge that Mac and Willie are simply crazy about one another, but knowing our guy, Jamie takes what little he is offered with humble pleasure.

Jamie must again leave a child of his behind to another, but this time his truest of friends steps in to be Willie’s father. The relationship of these two men is forever altered as Lord John takes on the most precious piece of the man he adores but can never possess. At the end of  Of Lost Things, tears are flowing, and Sam Heughan earns his keep. Damn you, Diana Gabaldon. Damn you, Ron D. Moore and Bear McCreary.  And double-damn you, Bob Dylan!! Every time I watch it, I’m clutching my chest, crying, and marveling all at the same time. 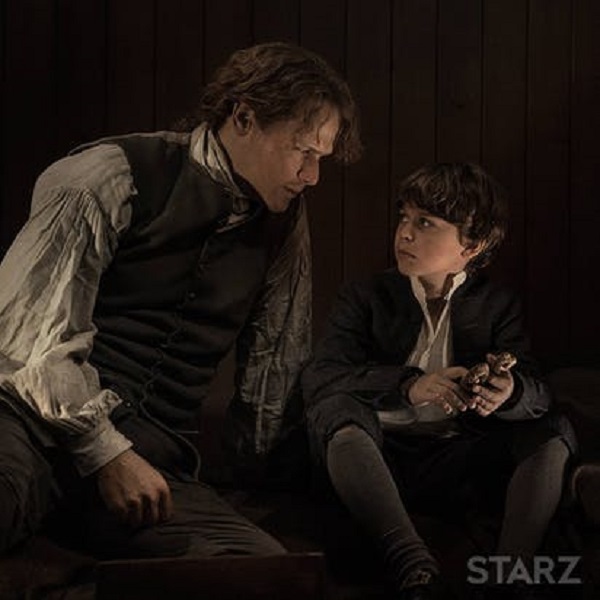 Marsali finds her stepdaddy in a rather uncompromising position when he returns with Claire to Lallybroch. This Da of hers is a man of kindness, protection and honor. We still don’t know what Laoghaire is forced to endure with her two previous husbands—and we know damn well that Leggy’s marriage to Jamie had no solid interpersonal foundation. She and the bairns needed a man in the house; Jamie needed a purpose…

…picture if you will, a juxtaposed scene of  two marriage beds, 200 years apart, but by Gabaldon’s twisty time loop theory, both scenes might be happening simultaneously. Jamie’s ghost is ensconced in an armchair in the bedroom of Claire and Frank, while Claire’s specter is shoving Leggy out of bed onto the cold hard floor…

Put aside the Twilight Zone of time travel ruminations, because Marsali unexpectedly finds herself graced with an entirely different idea of a stepmother in Claire, where the young girl’s feelings of animosity and scorn grow into respect and perhaps something deeper. I look forward to exactly how this unexpected mother/daughter relationship will be handled in future seasons. 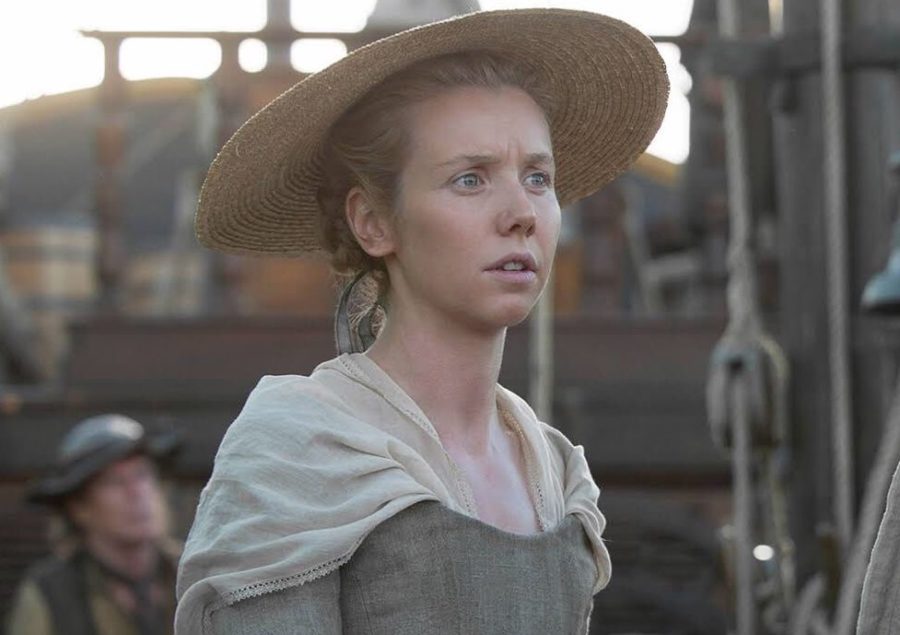 Book readers know that there will be others whose parentage poses some interesting quandaries as the story unfolds. While having characters whose parents have gone or were never known works well for the author’s storytelling, it works in magical ways for the reader and the show watcher. I think Diana Gabaldon knows this very well.