Author Diana Gabaldon long ago highlighted “identity” as a key theme in the Outlander series’ third book, Voyager. We take a look at how Starz brought this to life on screen for key characters in Season 3.

Way back in the old Compuserve Writers’ Forum, Diana Gabaldon used a single word to describe the main theme for each of her existing Outlander novels. I marveled that “identity” was the concept assigned to Voyager, one of my favorite books of the series. This theme resonates throughout the story, and for the most part, carries over nicely from page to screen. Voyager is packed with moving events, rollicking action, humor, and surprises, but the overarching destination of Voyager is character growth and self-identification. Here is a breakdown of how Starz’ Outlander Season 3 screen adaptation of the third book of the series illustrates this for the main characters.

In a gripping season opener, our man is most certainly alive, despite his plan to die on the battlefield of Culloden. He moves through the season from wounded soldier to the reclusive Dunbonnet; to Mac Dubh in the cold and desolation of Ardsmuir prison. Always the natural leader, he forsakes special treatment to remain among the circle of his men. Through sacrifice and skillful advocacy, Jamie is able to protect his Ardsmuir clan. Escaping transportation, he is Mackenzie the groom, and secret father of his beloved Willie. Once free, he is “daddy” to his new stepdaughters, and ultimately finds his way to Edinburgh as the printer A. Malcolm, and smuggler Jamie Roy. The number of identities assumed by Jamie Fraser in Voyager is legend, but no matter who he is, the road he travels visits fear, heartbreak, intrigue, and joy, and Claire’s return raises the stakes. Jamie’s true destiny is with Claire, and the revelation of them turning up on the shores of the New World is for us, a delicious segue into Season 4, but a bombshell of an affirmation for him: he is finally free to simply be James Fraser, with his wife, Claire.

I am a steadfast fan of Claire—and that whole story is right here. Back in her own time, Claire subsists in a world of grief during those early months and years. Brianna keeps Claire bound to Jamie, but the person known as Mrs. Frank Randall could not thrive. The journey to coming closer to her true identity means tucking Jamie safely away into her heart and turning towards something more: becoming Doctor Claire Randall. Claire grieves Frank’s death; she did love him, once; but beginning two hundred years in the past, Claire loved Jamie. That love and a world of courage moves her to take a massive leap of faith and step through the stones again. It’s forever this time for Claire Fraser, MD.

Poor Frank. He expects all to return to normal—no muss, no fuss, no bother. He is impatient and intransigent, and while he is not born to be Claire’s husband after all, it was a hell of a try. He does exceedingly well as Daddy to Brianna, and tolerates Claire’s medical calling. But he is only human, and often behaves very badly. Frank is an expert in Jacobite history, and uncovers many secrets of that era, some closer to home than others. And then he is gone. 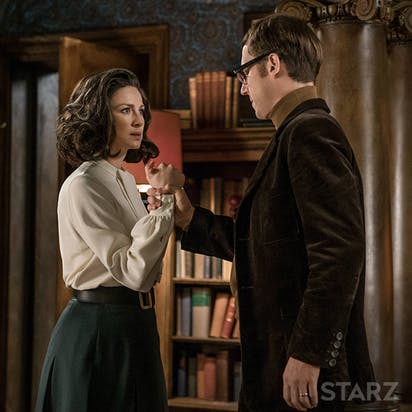 Ms. Brianna Randall learns that the man who raised her is not her biological father, and her sense of self is upended, despite Claire’s best efforts for tactful gentleness. Time traveling aside, the idea is a lot to take in for this passionate young woman, and Bree unleashes her feelings of betrayal and anger toward Claire. Some in the Outlander fandom describe Bree as spoiled and selfish; I see her as a post-adolescent in pain, and Claire’s heart is breaking for her daughter. Brianna finally turns the corner when seeing is believing, and grows to understand Claire’s love and loss. Bree begins to embrace the idea of James Fraser with wonderment and affection. She becomes Claire’s greatest ally, this time as both a loving daughter and a young woman of growing maturity and independence. 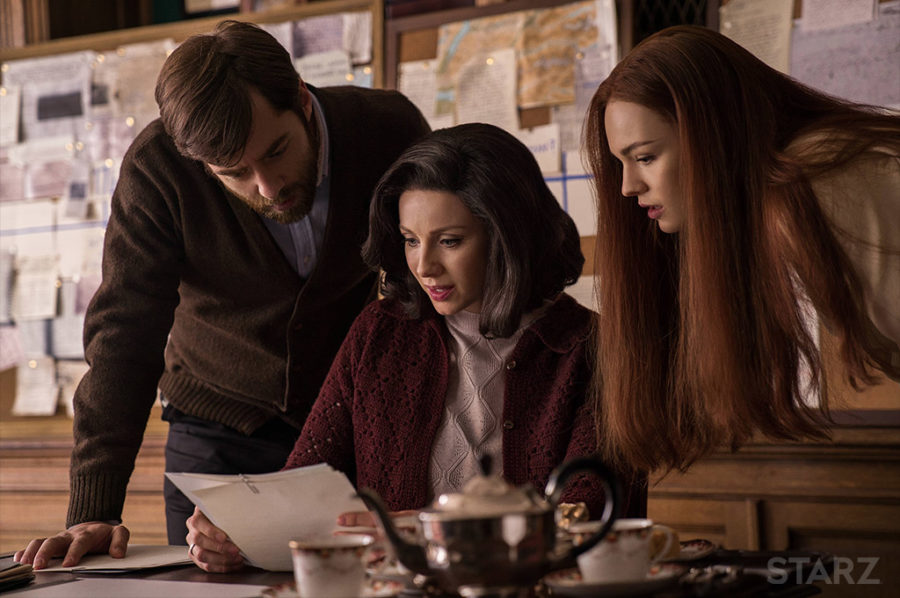 The 18th century world of the closet homosexual was a shady and dangerous place, perhaps more so for an honorable man of noble birth. The unnamed scandal that exiles Lord John to the office of Governor of Ardsmuir Prison brings him face to face with Jamie, who unwittingly captures John’s admiration and love. From military officer, to prison warden, then as a stepfather, and Governor of Jamaica, John’s need for Jamie moves from infatuation to love, deep friendship and mutual respect. John accepts this role with pleasure and honor, but it’s a bittersweet acceptance of what he will never be. 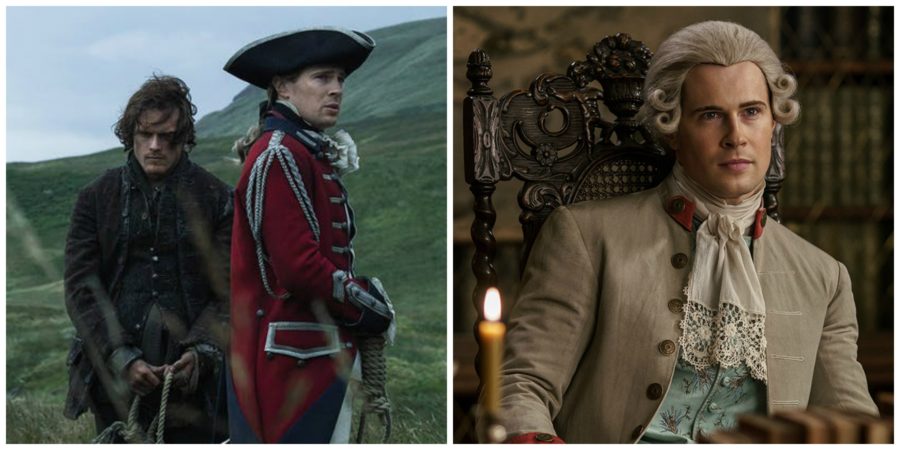 Young Fergus exacts a promise from Jamie: should he lose a limb in the course of his service, he would remain under Jamie’s care for life. This innocuous vow foreshadows later events, and despite young Fergus’s loss of his left hand, his sense of French practicality and fatalistic humor is ever-present as he matures to adulthood. The island wedding of Fergus and Marsali is officiated by the delusional, weed-smoking Father Fogden. In the midst of this fiasco of a ceremony, Jamie gives Fergus a somber and invaluable gift, declaring Fergus his adopted son and giving him a full name: Fergus Claudel Fraser. 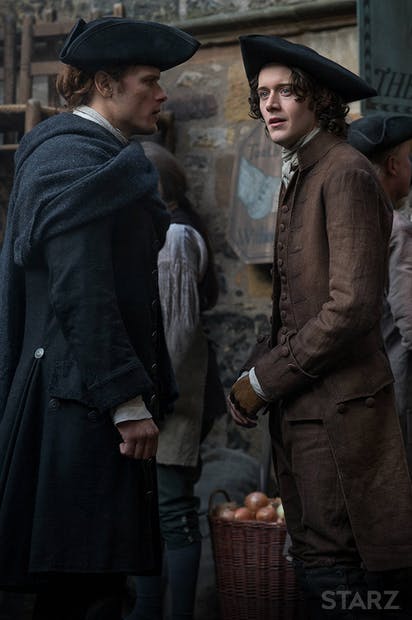 In “The Doldrums,” Mr. Willoughby tells his story of prestige and entitlement as a member of the Emperor’s palace in China, transporting the listeners to a place a world away. Rescued in Edinburgh by Jamie, who renames him with kindly intent, Yi Tien Cho is scorned by the females he pursues, and a slight elbow fetish doesn’t exactly help matters. STARZ reconstructs the character and his story arc from a near caricature as described in the novel, to an updated stranger in a strange land—wise, eloquent, caring, and frequently drunk. In a surprising twist, Yi Tien Cho finds his own place with Margaret and the maroons. 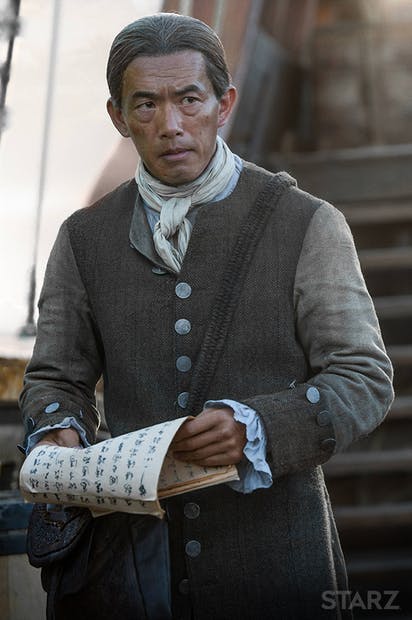 In Voyager, Ian Murray’s proclivity for calamity takes him many places, moving across oceans and strange new worlds. His journey to adulthood includes things his mother would not want to know, including just what kind of “help” he lends to his Uncle Jamie in Edinburgh. The search for the kidnapped Ian sets the story onto its path, and this likable young man learns all about fear, love, and trust, leaving childish things behind forever. 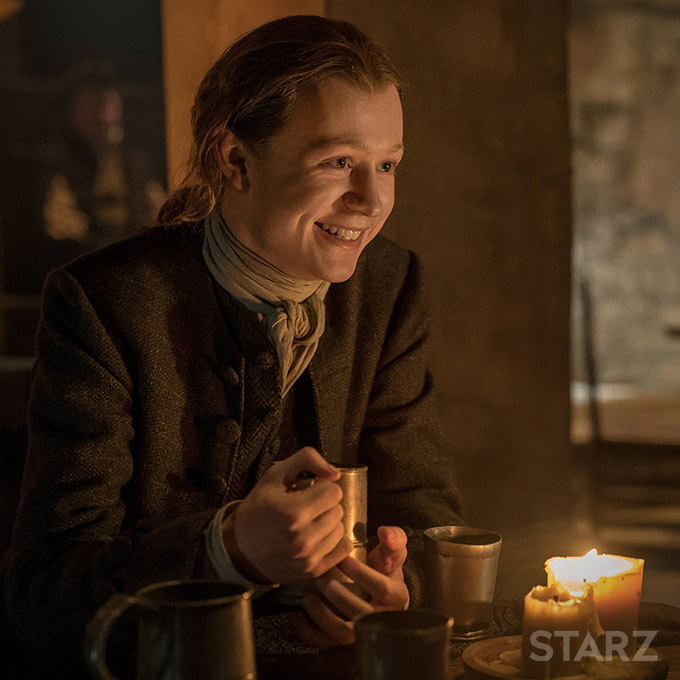 Into a New World

Other characters find their way throughout this big story. Roger’s life entwines with Brianna’s. Murtagh lives. Geilis Duncan meets her fate, proving that old bones indeed have a story to tell. Life in the Colonies is the next stop in Season 4 of Outlander on STARZ, and I’m anxious to see how the theme of identity takes shape in this new world of Outlander!

Which character’s identity story did you love the most? Any that hit home for you? We’d love to read your thoughts below!