7 Scenes We Hope We See in Outlander Season 4

As Outlander fans anxiously await the Outlander Season 4 premiere on STARZ Nov. 4, we take a look at the top scenes from the Drums of Autumn that we hope make it from page to the screen.

It’s been a long, dry Droughtlander hasn’t it? This time last year, we were almost knee deep into Outlander Season 3. Finally, we are heading down the hill, full speed towards the premiere of Outlander Season 4! Can you feel it?

We’ve seen the official trailer and glimpses of some of the scenes from the new season. I’m going to share some scenes I hope to see played out on screen by our beloved characters and actors.

Spoiler Alert: If you haven’t read Drums of Autumn or prefer to remain completely in the dark about Outlander Season 4, you should probably stop reading now.

The privy scene: In this scene Lord John Grey and Willy come for a surprise visit to Fraser’s Ridge. Claire is collecting herbs along the stream when she discovers Willy screaming because he is covered with leeches. Lord John left him to wait by the stream and obviously went ahead to warn Jamie that he has brought Willy with him. Claire immediately recognizes Willy as her stepson due to his uncanny resemblance to Bree. She is concerned that they are there, given Lord John and Jamie’s history and the fact that Willy still does not know that Jamie is his birth father. Willy is a taken aback by the fact that Claire knows his name and wants the leeches removed immediately. She takes him back to the house.

Greetings are exchanged and there is tension in the air. Ian enters the house and takes Willy out to the stream and woods. Claire asks Lord John outright why he is there and he assures her that they are just passing through on their way to his property in Virginia since his wife Isobel has recently died. Their discussion is halted by Ian running into the house and informing them that they were trying to shoot a snake in the privy when Willy fell in!

They rescue him and inquire “What news from the Underworld, Persephone?” (Persephone being the queen of the underworld) His facial expression is totally a Fraser look. This obviously cuts the tension of the visit and would be a great comedic scene to add to the season.

When I was reading Drums of Autumn, my husband and I were on our way to Colonial Williamsburg. When I read this scene, I busted out laughing. He looked at me as if I had lost my mind! I knew immediately that they needed to show this scene in the new season.

Jamie and Claire discovering the Ridge: Jamie and Claire have been on a long journey from River Run. Claire notices how happy Jamie is in the mountains. They stop in a clearing and Claire finds wild strawberries. The land has a spring and a meadow. It would be a great area for crop fields and good for drainage.

Jamie says that the strawberries are a sign it is meant to be. He explains to Claire that the fruit has long been a symbol of Clan Fraser, also that they are shaped like a heart. Since they are alone in the quiet, romantic setting, they take advantage of that fact, “christening” their land as it were.

I can’t wait to see them building a life together. This is something they have longed to experience for so long. Claire can finally have a home of her own with Jamie and Jaime can finally be the rightful Laird that he has always wanted to be. 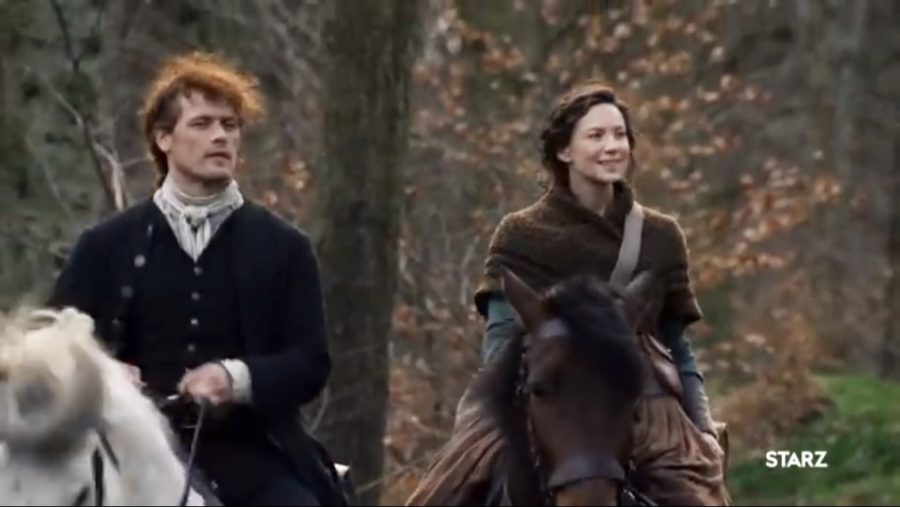 Claire in the woods during a lightning storm: Claire was tending to a birth at the Muellers, a German family, for three days. It had been raining and finally had let up for a little and she thought it would be a good time to  get back to the Ridge. As she heads home, a lightning storm arises, spooks her horse, which throws her and gallops away. Her leg injured so she limps to safety under a fallen tree. There in the corner she finds a skull with fillings. However, fillings won’t be invented until 1819. Could this be another time traveler? Just a side note, is it just me or does Diana like to use the word “ozone’’ whenever she is describing storms or rainy weather? I digress.

Are you surprised that Claire would find herself in danger or a predicament? Of course not. I think this would be a spectacular scene with CGI lightning and special effects. As I first read this in the book, I was holding my breath and couldn’t believe she almost fell off the steep cliff, horse and all. It was obviously terrifying. 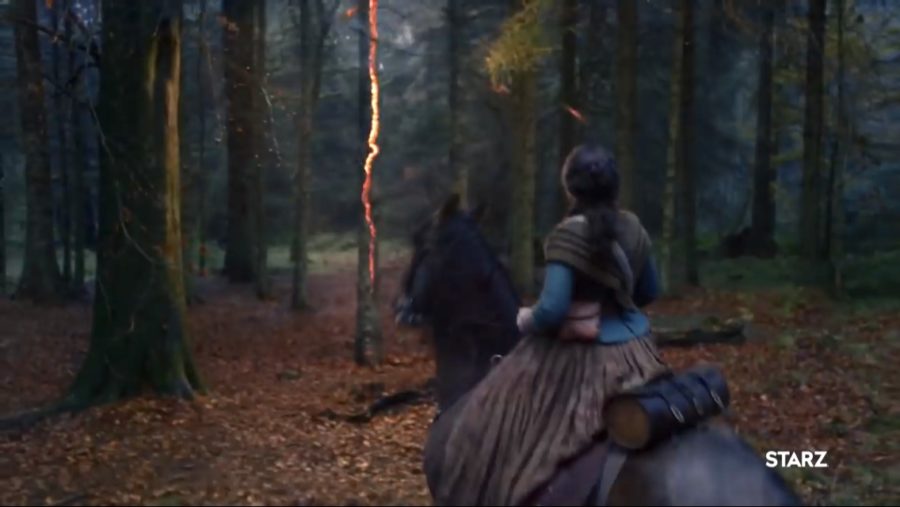 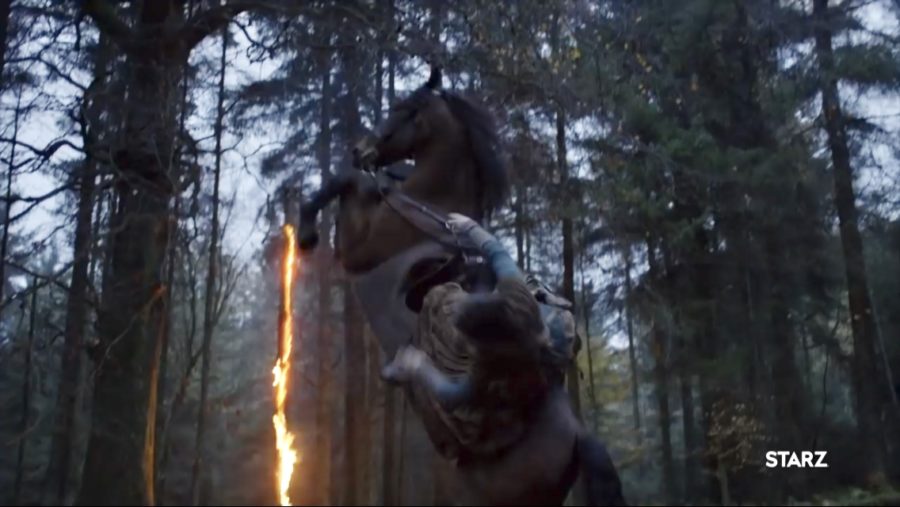 Bree vs. Laoghaire at Lallybroch: Bree shows up at Lallybroch looking for Claire and Jamie. She meets Jenny’s family and Laoghaire just so happens to be visiting. Laoghaire thinks Bree is lying that she is Jamie Fraser’s daughter but after Bree shows Ellen’s pearl necklace, Laoghaire tells her that his debts are your debts as well. To get back at her, Bree reveals that Laoghaire almost tried to have her mother killed at Cranesmuir.

I think this scene could harken back slightly to Season 3 “First Wife” when Laoghaire burst into the room, shocking Claire. I’m looking forward to seeing everyone’s face as they meet Bree for the first time. I’m sure Jenny will feel a bundle of emotions — surprise because she was told by Claire that she and Jamie never had a child, happiness because she realizes she has a niece, and mistrust because she was lied to about the fact that she had no nieces or nephews.

I know Bree will be nervous and feel out of place but it will be a pivotal scene where she gets turned in the right direction to find her parents and reunite. I can’t wait to see Laoghaire’s face when she realizes Jamie and Claire have a living offspring.

Claire playing surgeon at a dinner party: One of the more amazing moments in the book is when Claire performs herniorrhaphy or in laymen’s terms hernia repair surgery, during a dinner party at Jocasta’s plantation. You read that right, a dinner party! “Clear the dishes and silverware people we have an emergency!”

John Quincy Myers, who befriends Jamie and Claire soon after their arrival in America, is diagnosed with a hernia by Claire. He shows up drunk to a dinner party and collapses. Claire performs surgery on him since he is already passed out.

In this scene, people will get a chance to see Claire at work as a healer. She states that she felt she was in a “trance” and had no regard for what was going on around her, she was one with her patient. She would get a chance to prove herself as a skilled healer, doctor and surgeon.

I am looking forward to see all the different ailments Claire gets her hands on (pun intended) in this season and the following seasons. It will be good to see 18th century surgeon Claire in action again. 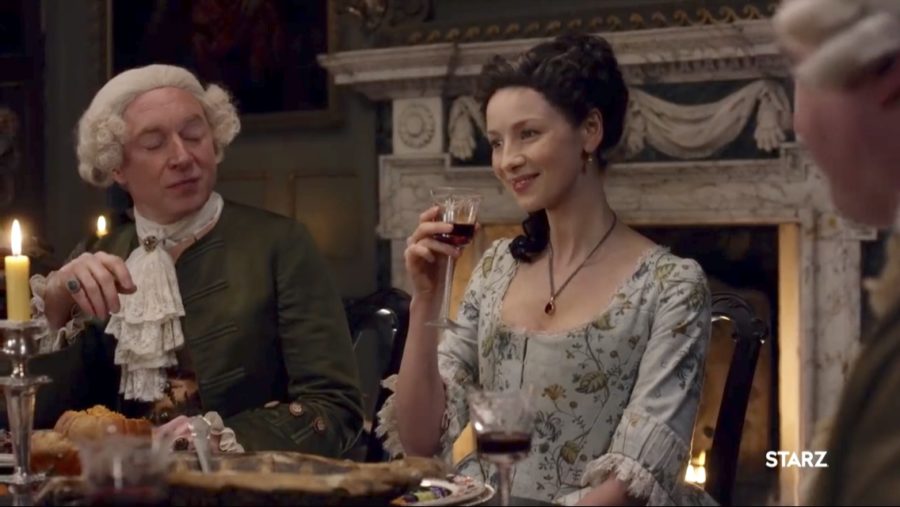 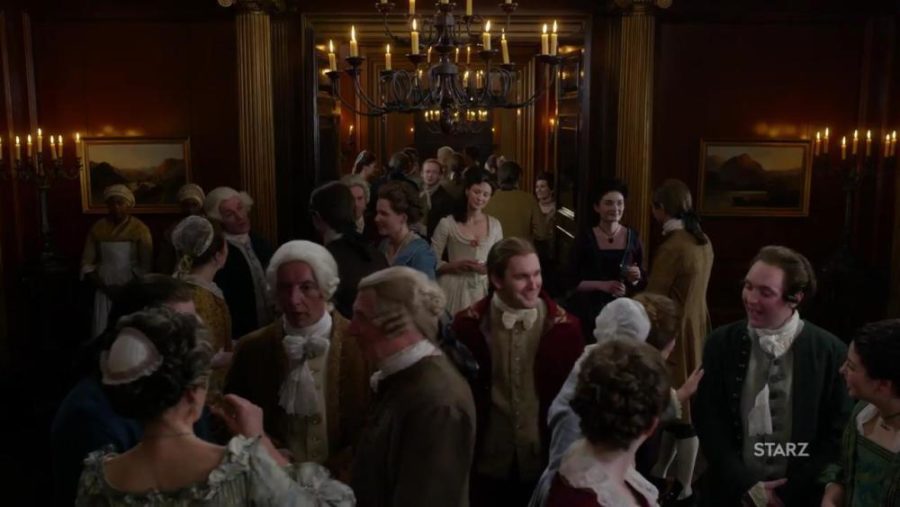 Jamie presenting Claire with a 24th wedding anniversary gift: Apparently, that year is the gift of medical supplies and a journal. He gives her Dr. Rawling’s medical kit full of tools, a microscope and journal that proves helpful as the book continues. She references the journal several times on the Ridge, using it as a sort of charting for her own patients. She uses the microscope when she starts growing mold for penicillin, among other instances. She will be able to use these tools to perform many procedures and get back to being the healer she was meant to be in the 18th century. 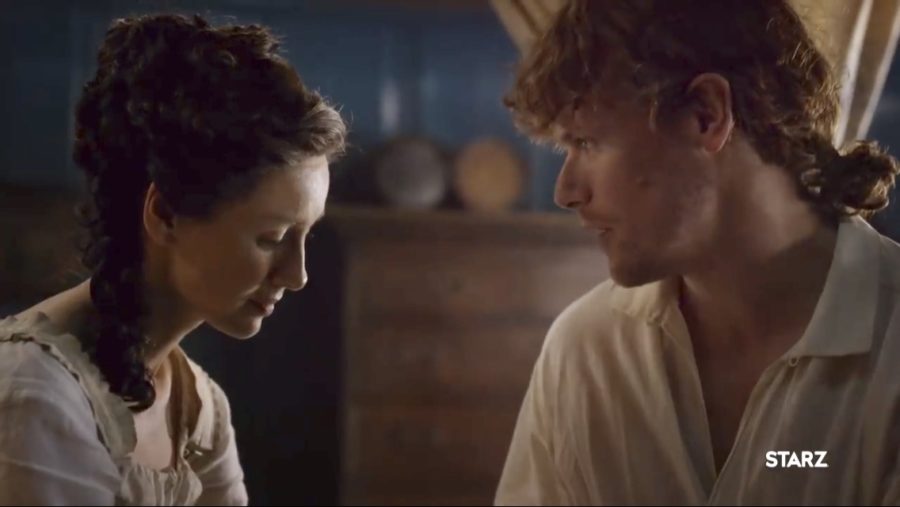 Jamie the bear killer: Jamie and Claire are camped for the night when a large black bear comes behind Claire and knocks her down. Jamie ends up on the bear’s back and Claire tries to distract the bear by slapping it on the nose using one of Jamie’s catches of the day. Jamie ends up killing it with a knife. Three Native Americans show up minutes after. They share a meal of bear meat while Jamie explains how he killed the bear. They have respect for Jamie for killing such a big bear with just a knife. I know this would be very hard to portray in totality on the screen and the producers have hinted that there will be a twist but this will be a dramatic scene for Jamie and Claire and will help prove Jamie’s worthy of being a friend and ally to the Native Americans with his strength and defense.

Honorable mentions and miscellaneous: I also can’t wait to see Murtagh, assuming we will get to see him. It will be great having an old friend back with the gang. I’m excited as well to see Claire’s actual surgery room. I have a vision in my mind and I’m curious to see how it compares. Will Clarence and the white sow also be featured? Time will tell…

What are the scenes you are hoping to see in Outlander Season 4? Hold on tight my fellow Sassenachs…We are cleared for landing…