New York Comic Con was a cornucopia for Outlander fans, including a master class panel with Outlander showrunner Ronald D. Moore. Here’s what Ron shared about his move from outer space to Outlander.

Outlander fans show up in droves for any Outlander-related event, and this year’s 2018 New York Comic Con (NYCC) was no exception. While the Outlander phenomenon was a small slice of the humongous NYCC pie, the multi-day event afforded several opportunities to celebrate Outlander. Whether sitting for a spell on the rocking chairs on the front porch of the cabin at Fraser’s Ridge, crowding shoulder to shoulder at an interview with the cast, or having the good fortune to attend the Saturday evening panel and “surprise” screening of Episode 401, the Outlander fandom represented with all the exuberance and New York savvy one would expect.

One gem of a panel t00k place off site from the sprawling Javits Convention Center. Packed into a dark industrial elevator whose huge doors opened onto a bright and sleek third floor studio, attendees scurried into a conference session featuring Outlander’s showrunner and producer/writer Ronald D. Moore. The moderators of the conference, which was part of NYCC’s Master Class series, were Sony Picture Television co-president Chris Parnell and Mark A. Altman, a Star Trek expert and author. The 90-minute panel was a rich and intimate look into what brought RDM to do the things he’s done over the years and how he plans to keep doing them. 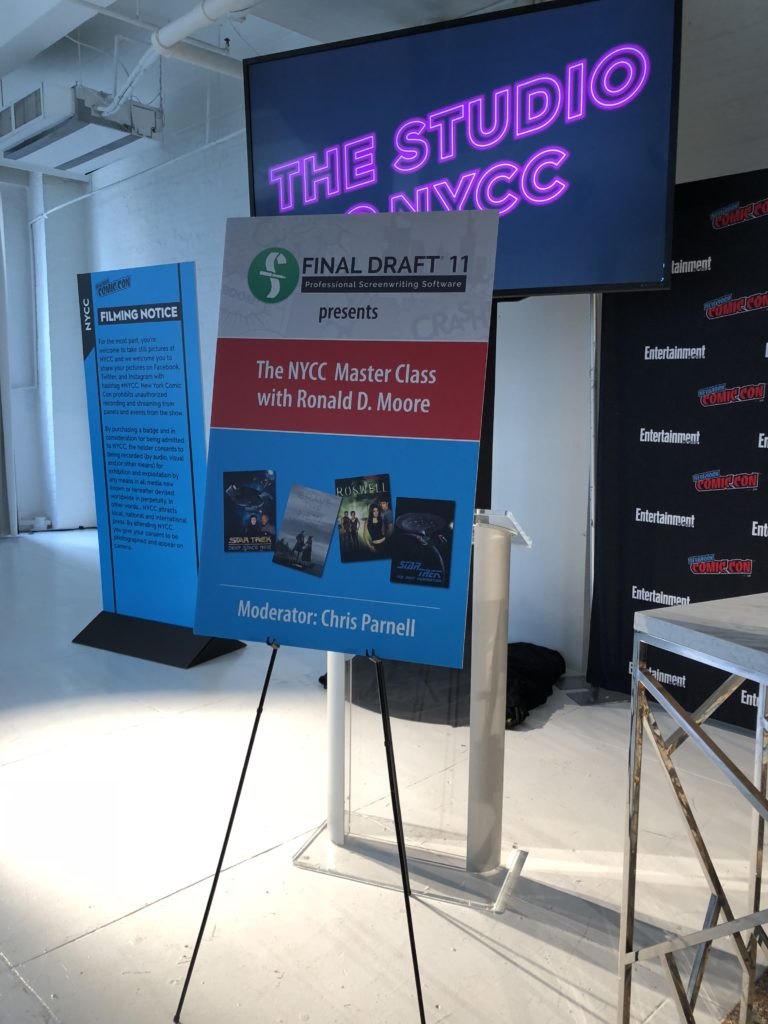 The first part of the program explored Ron’s start writing for Star Trek: The Next Generation (TNG), and how flunking out of political science at Cornell University led him to his friend’s couch in Los Angeles and a tour of the Paramount set. Adorably, his two memorable reactions to being on the studio set of his beloved Star Trek were:

So, in the way of the world back then, Ron handed the tour guide a script he wrote, and that script was bought six months later. This was the beginning of a ten-year stint with TNG, where he was accepted “from day one” in the writers’ room by the likes of writers Ira Steven Behr and Michael Piller. He described the evolution of his writing process here as an emotional and creative give and take, stretching and learning with the ability to make mistakes without penalty. He loved it.

Moving on to Battle Star Galactica (BSG), Ron said he was ready to expand the sci-fi ideals that were not realized under some of the constraints of TNG and go for something groundbreaking. Ron said he was proud of BSG and that he wouldn’t change a thing about it. Interestingly, Ron called TNG as “a procedural show,” where the technology of the times precluded a serialized story—if viewers missed an episode, there was really no way for them to catch up in the pre-DVR world. The networks strongly resisted the writers’ pleas for a more robust serialized story and instead, each episode neatly pursued the story arc, typically with a morally-driven conclusion. In BSG, Ron said that the current events of the time were purposely interwoven into its stories, with themes of war, religion, morals, and culture, and without providing answers, the viewer was forced to “empathize with the other side.” Powerful stuff, indeed.

From Outer Space to Outlander

RDM was attracted to Outlander because it’s historical fiction and especially because of its strong female lead. Not to be overlooked was the influence of his wife, Outlander costume designer Terry Dresbach, and his co-producer, Maril Davis, both avid readers of the book series. They double-teamed him to take it on so he read the book and the vision was launched. To RDM, moving from outer space to Outlander wasn’t such a leap—after all, sci-fi stories are also “period pieces,” and recreating 18th century Scotland was simply another new world for him to explore. He describes Outlander as a great adventure story and a “rip-roaring yarn.” 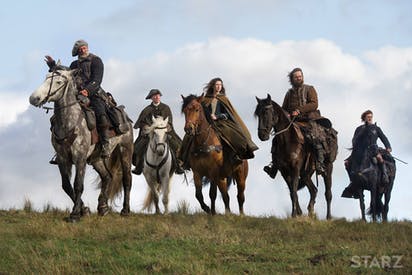 One early challenge was the need for Claire’s frequent voice-overs, as the book’s entire story is told through Claire’s point of view.  Apparently, screen writers consider voice-overs a “cheat,” but Claire could only speak to the reader and viewer. First-person storytelling doesn’t translate well into television, where showing rather than telling is a much more interesting experience for the viewer. RDM described the evolution from the first-person narration to expanding the world of the story, citing scenes featuring only Dougal and Colum as one example. As the show evolved, the natural pivot point shifted the perspective to Jamie’s, where his own voice-over opens the second half of Season 1 in “The Reckoning,” and the use of voice-overs gradually decreased moving forward.

RDM described the need for strong leadership and the use of “both sides of his brain” when it comes to showrunning — juggling writing, physical logistics, cost control, casting and the management of a huge staff, while keeping the cultural vibe of the show en point. Ron said he knows “a little about a lot of things” and enough about budgeting to make the production work. For example, if he’s had a cost overrun in one episode, he can adjust the production in a way that works for the next episode and still balance the budget. This may mean some sacrifices, but he still comes away essentially satisfied that he’s told the story the best way possible using the resources at hand.

Ron said Outlander is the hardest show he’s ever worked on as a producer. The “roadshow” of Outlander constantly leaves behind sets, locations, characters, and time periods and often feels closer to making a movie than a television show. The pace constantly pushes everyone — actors, writers and crew alike —to a state of exhaustion. As an aside, Ron noted that it all would have been much easier if Claire could only have simply traveled through time, arrived at Castle Leoch and then lived there for the next five or so years!

Learning early on that Outlander would be picked up for additional seasons not only gave the writers a huge vote of confidence, but it allowed for longer-term planning and a bigger pot of money to work with. With Voyager already in discussion during Season 1, knowing that the Black Sails set would be available was a big help to make it come together.

The big question about Frank was raised at the panel: Why is Claire’s relationship with Frank so prevalent and so important to this story? RDM explained that it was foundational to the character of Claire right from the beginning because the entire first book and Season 1 is framed around the idea of Claire’s drive to get back to Frank. To Ron, Frank had to be someone special in her life, someone who had to be worthy of Claire. Otherwise, why not stay with the fabulous red-headed Highlander, the one she was falling in love with? If Frank was a dud, well, then, why would Claire be so determined to get back to him? In order for Claire to be respected and understood, it was essential that Frank be a worthy character to her, making the triangle incredibly important. Moreover, when Claire returned to Frank, he had to be worthy of Brianna, too. On top of it all Tobias Menzies’ portrayal of Frank was so amazing that they just wanted to keep writing for him. 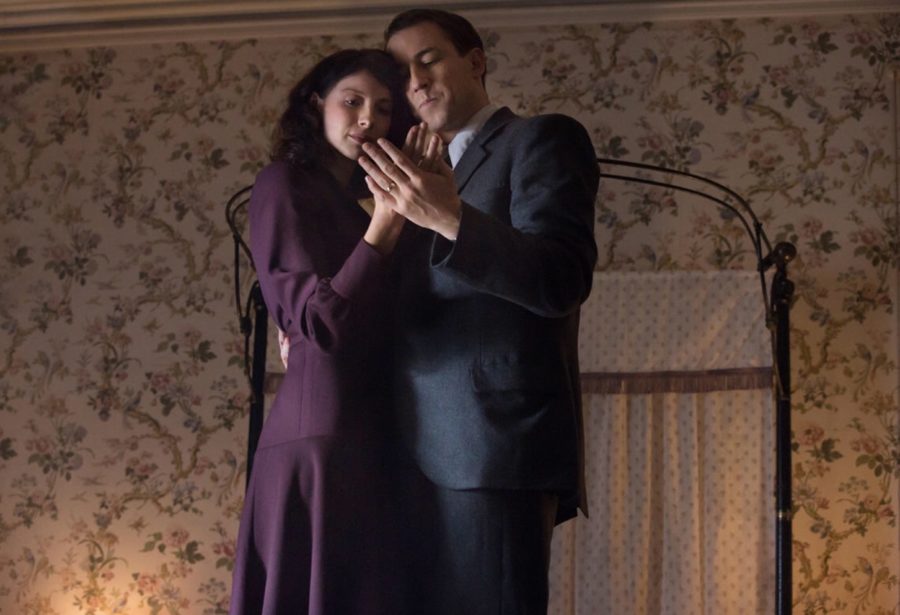 Highlights From the Audience Q & A

1. Identified as one of the few males in Hollywood who has given strong roles to female characters (this was met with whoops of approval), RDM explained how he appreciates and likes the perspective of his female characters, and how he “hopes he gets it right.”

2. Audience members wanted to know what tasks have been delegated to other producers now that RDM has stepped back from Outlander’s day-to-day showrunner duties. He has stepped back from production meetings, day-to-day casting, and production of specific episodes, but remains involved in story notes and the scripts. He said he LOVES post production and editing, and finds these areas the most difficult to give up. Chris Parnell noted that Ron has been busy shepherding in his new space race project for Apple, entitled For All Mankind, and Ron said he is “dangerously optimistic” about it.

3. Ron was asked about the origin of the weekly BSG podcast. When he asked Scifi.com back then what a podcast was,  he was told that it was “like radio on the internet.” Initially taking care to avoid extraneous noises, Ron soon learned to “just say screw it, and press the record button” even if the cat unexpectedly burst onto the scene. He said the episode podcast is the final piece of work on a show.

4. When asked to comment on Matt B. Roberts mentioning that Season 4 was the most difficult so far, Ron said that despite still shooting in Scotland, its depiction of the colonies was a big shift. The need to “visually start over” for locations in Scotland that would work in America was a challenge, especially that most older structures in Scotland were made of stone, while buildings in the colonies were made of wood. Adding to the shift were new villains, new characters, and new stories. From Wilmington to River Run, and on to Fraser’s Ridge, Ron dramatically asked of Diana Gabaldon, “Can’t you just go somewhere and stay there?”

Before the panel closed, RDM thanked Sony and said that “nobody fought for Outlander as hard as Chris Parnell.” Chris Parnell gave thanks to the incredibly loyal fan base that returns week after week, and noted that now that baseball season is ending, Ron D. Moore is nowhere to be found on Twitter, so there’s no use looking for him there. 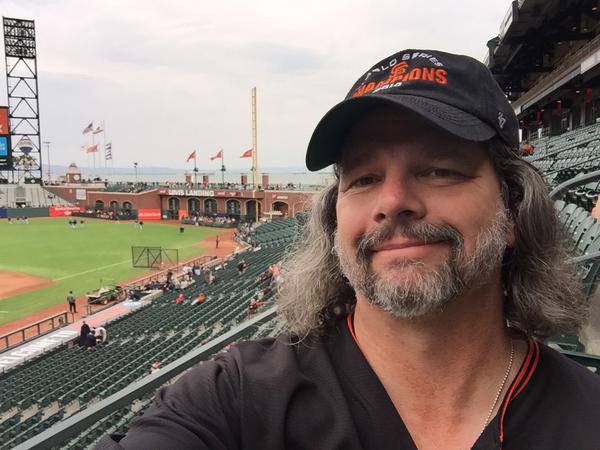 Do you think the show has changed at all since Ron D. Moore stepped aside from handling all the showrunner duties?