Through rough patches in life, including the one the world finds itself in at this moment, people often find solace in escapism through fiction. Outlander has been an escape for many, ever since the publication of Diana Gabaldon’s first novel to this very day as fans rewatch the recently-aired Outlander Season 5. Not only do viewers and readers wish to lose themselves in the adventures of the Fraser clan, but they also look to the actions of these fictional favorites for inspiration on how to deal with our own trials and tribulations. Outlander Cast listener Susan Gajderowicz has done just that.

Like Claire Fraser, Susan has spent many years as a registered nurse. Through the difficulties that come with such an heroic profession, as well as those from her personal life, Outlander has been a constant in helping her find healing and comfort. “As I celebrated their successes,” Susan says. “I found myself making progress, as well, and generally feeling better about my own situation.”

Here’s a little more about Susan and her Outlander journey:

Tell us a little about yourself: I retired in December 2017, having worked in hospitals and the pharmaceutical industry for over 40 years (Also an RN. Yeah, Nurse Claire!) Still trying to decide what I want to do for my encore. (I did treat myself to a trip to Hollywood last year where I worked as an executive producer on Adam Sigal’s Sargasso movie. Had a ball being involved in that production. I had a brief onscreen time and got my first IMDb credits!?! Graham McTavish was among the actors in our cast!) 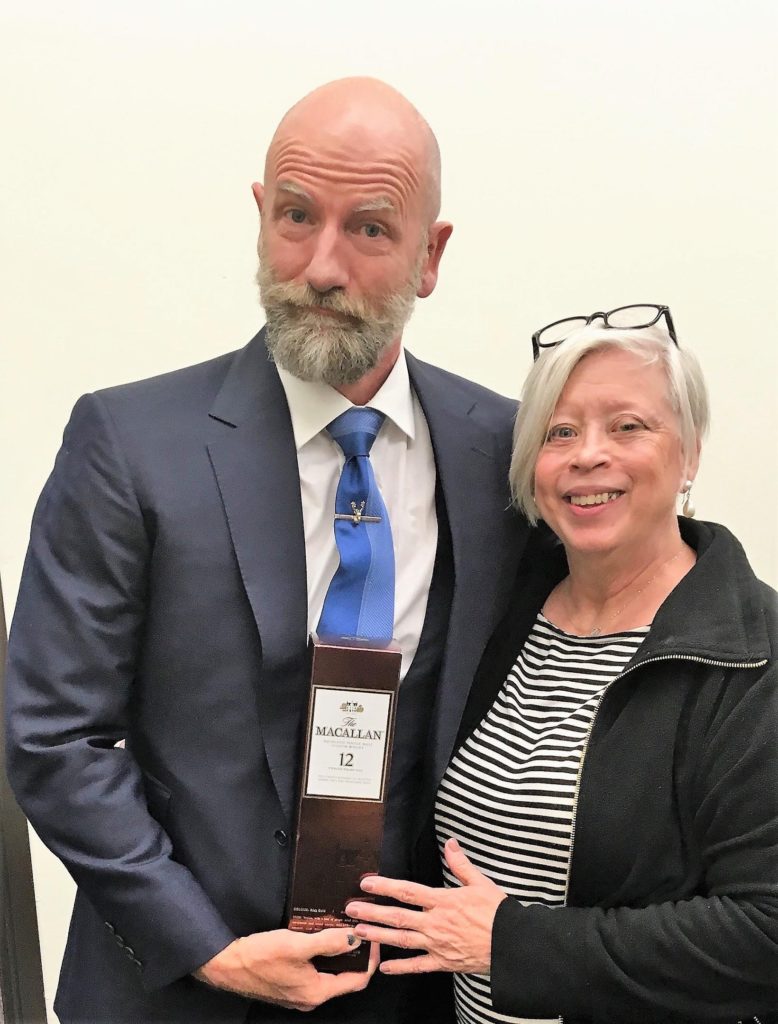 I found Outlander during the promotions of the original broadcast on STARZ. I’ve always been an avid reader, enjoyed history and historical fiction, as well as romance, and fancy myself a bit of an Anglophile, so this seemed to be my cup of tea! I was hooked upon first watching (and the immediate re-watching! Gotta love that about cable subscriptions!). I headed to the library the next day, and was thrilled to learn that, not only was the story based on the book by Diana Gabaldon but it one of a whole series! I also learned that both my sister-in-law and one of my sisters had read Outlander when first published. Not sure why they hadn’t shared at the time, other than maybe because I was not a fan of sci-fi (which was how it was classified), and had little time for recreational reading then. I’ve made up for lost time and have read all Diana’s fictional work date and am eagerly anticipating Bees, as well as her new novella(s). I’ve yet to visit Scotland, ‘though a favorite uncle was born in Ayr, so it’s long been on my Bucket List. Would love to be there to watch the filming of Outlander! I have to confess, I’ve become a complete Obsessenach! My family has set limits of how often/how much I can discuss the topic in their presence!?! For the record, this “addiction” is not something I wish to be cured of. Despite all that, I will neither confirm nor deny the rumor that current count for my Pinterest collection of SRH pins runs in the tens of thousands!?!

Favorite Book/Season?: Outlander (S1) where it all began!

Are you are book reader and/or show watcher?: Show first, then (all) the books.

What was your first experience with Outlander?: I began by watching S1.1 alone and, savored every moment during the rebroadcast that immediately followed on STARZ. I think I watched every time it aired that week! My brother happened to be in town visiting during “The Wedding,” so I let him know we’d be “attending the nuptials” (watching) and treated him to an ample Scots-themed ”wedding reception” dinner! I’ve since met many fans, both locally and throughout the world, who seem to share my love for the story, the characters and the actors who portray them so well.  I’m so happy to be part of this big crazy phenomenon that is the Outlander fandom  (the “FANmily”).

In what way has Outlander inspired you personally and/or creatively?: As I’ve since learned has been the case with so many others, Outlander came to me during a rather rough period in my life and provided not only an entertaining diversion, but a sense of hope and optimism that was sorely needed. Somehow watching and learning of all the trials and tribulations the characters encounter (in short order, no less!) seemed to help put my own concerns and issues into better perspective. I met and spoke with Diana at a writers’ conference in Kentucky shortly after this realization, and she agreed that this was not an unusual experience, that others reported similar circumstances seemingly made better by encountering Outlander. Of course, Sam’s My Peak Challenge (I’m a 4-year Peaker) has continued to provide inspiration and guidance for self-improvement and satisfaction in living a healthy lifestyle, setting goals and pursuing my personal best.

So many of the cast, staff and crew actively engage and encourage the Outlander “FANmily” by both example and through sharing their experiences and opinions. I love that so many actively support charitable works, as well as the arts and organizations that strive to better communities and our world. I now support charities, have taken part in organizations and correspond with others who are like-minded around the globe! Caitriona Balfe has helped me learn how to ensure women’s voices are heard on topics that matter. Tim Downie introduced me to Grenfell United and I continue my support of them. Ronnie Goodwin has delighted me with his fabulous photographic art and sense of humor, as well as has introduced me to some persons involved in researching and preserving historical relics  and traditions. I have been working with Clare Campbell (of Prickly Thistle in the “Build the Mill”) efforts to establish a Tartan Mill on the Black Isle, the first such new venture in a very long time (I’m an official Highland ‘Tartan Rebel’!).   was shocked to learn that tartan was no longer woven in the Highlands. While I actively support the MPC charities, I have also chosen to help many closer to home who do similar work. I’ve always been civically, politically and charitably minded, but Outlander has shown me how I can become more involved and make the commitment personal. I’ve corresponded with many groups related to history, preservation, reenactments and genealogical studies. I’ve even traced my family name to the heraldic seat in Dumfriesshires! I have also been inspired to write some posts and develop some photo collages inspired by Outlander, the cast and the ”trickle-down” activities in which I’ve become involved.

How do you share your love for Outlander?: I have taken part in so many Facebook Outlander groups that I’ve lost count! I remain an active reader and poster in several fave groups. I follow many of the blogs (such as this one!) and enjoy the podcasts.  I‘m also a Heughligan and a Bonnie Beastie and belong to the Hoosier Heughligans, based here in Indiana, as well as the Indiana Peaker group. (Though folks in the group, I’ve been introduced to the Scottish Society of Indianapolis and volunteer for the annual Highland Games and Fest, as well as local dinners and activities.) I really enjoy all the new friends made through involvement with Outlander. I also have become reacquainted with some old friends who share my love of all things Outlander! On two (separate) occasions, I’ve had reunions with friends from the past with whom I’d lost touch for nearly 30 years! Both of these were through Outlander groups and resulted in an invitations to attend an Outlander convention along with said friends, first in Las Vegas and then in Chicago! I’ve participated in Outlander gift exchanges, group meetings/viewings (in NYC during Tartan Week, as well as those occasions previously mentioned) and, most recently, have become an Outlander Penpal. I do love all things Outlander and I have a generous spirit and wicked sense of humor, so quite happy to share. Did I mention that I do enjoy a wee dram of Uisge Beatha on occasion? Slàinte mhath!

Any special/fun Outlander moments you want to share?: One highlight was getting to meet, well I suppose more accurately I should say “encounter” Sam Heughan in the street outside my hotel in New York City as he was preparing to step out as the Grand Marshal of the Tartan Parade. I was befuddled and  tongue-tied, but he was quite charming and left me with a quick word, a squeeze and a mu-ah! before he and Matt were whisked away by the event handlers. My young niece (who accompanied me on this last minute mad dash to Manhattan) managed to get a quick photo from afar. In Las Vegas (where I’d really hoped for another Sam moment), I was thrilled nevertheless to meet many of the other equally charming cast members. I loved that Cait was polite enough to not comment on my errors as I greeted her in my best but rusty Irish Gaelic and graciously replied in kind.  Graham had told me that Gary gave the best hugs on the planet and I was happy to receive one after he’d warned “I’m comin’ at you!” And I was over the moon to discover particularly how charmingly adorable Stanley (we got to celebrate his bday!), Sophie Skelton and Cesar Domboy are. Tthey’re funny, too!

What are you looking forward to in upcoming books/seasons/events?: I want it all! I’m so excited at the prospect of seeing the love, growth and adventures of the Fraser family and the community on Fraser’s Ridge. And, I’m still holding out hope to have a chance to redeem myself in another face-to-face with Sam!

Sad Postscript: We are sorry to report that Susan died shortly after this post appeared. If you’d like to leave a tribute to her, here is the link.