The Fraser Coat: One Key to Turning Jamie into the King of Men

A coat is defined as “an outer garment worn outdoors, having sleeves and typically extending below the hips.” It’s something you wear to protect yourself from the elements and – hopefully – look good while doing it. When Jamie puts on his father’s coat, however, a transformation occurs – more than just a barrier against the unforgiving elements of Mother Nature, it becomes part of his persona and helps him fill the roles he’s destined to play. But just how does our beloved King of Men become the equivalent of an 18th Century Superman just by donning this bequeathed cloak?

It’s a handsome coat, the leather well-worn and aged in a style and cut fitting the Laird of Broch Tuarach (also known as Lallybroch). Leather is a tough, rugged material, appropriate for a Highland laird. It is resistant to tears and punctures, and provides good insulation in cold, wet Scottish weather.

Brian Fraser, Jamie’s father, wears the coat for the last time when he heads to Fort William to visit Jamie, who has been sentenced to a second flogging by Captain Jack Randall. Brian collapses and dies while watching Jamie suffer at the hands of Jack. Sadly, Jamie is unaware of his father’s death as the pain of the flogging has rendered him unconscious. 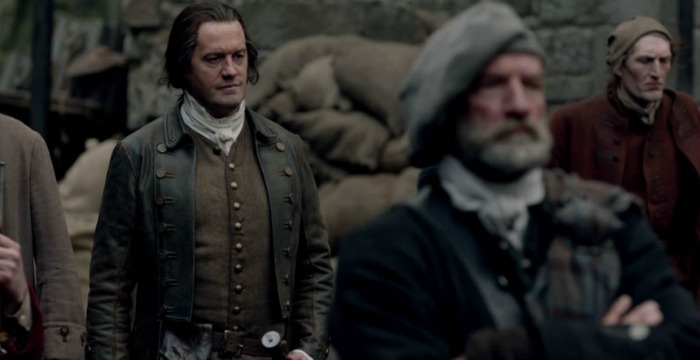 Thankfully, Jamie and the coat find their way back to Lallybroch where Jamie dons it the morning of rent-collection day in Season One’s “Lallybroch.” With his father’s death, he steps into the role and claims the title of Laird Broch Tuarach. He’s the head of Lallybroch now, and he needs to dress the part. The tenants coming to pay their rents will, undoubtedly, recognize the coat Jamie is wearing as the one that belonged to his father. The coat sends a silent, but powerful message to everyone that Jamie Fraser is in charge and he is his father’s son. The coat honors the memory of Brian Fraser and – kindly and quietly – demands that the tenants accept their new laird. 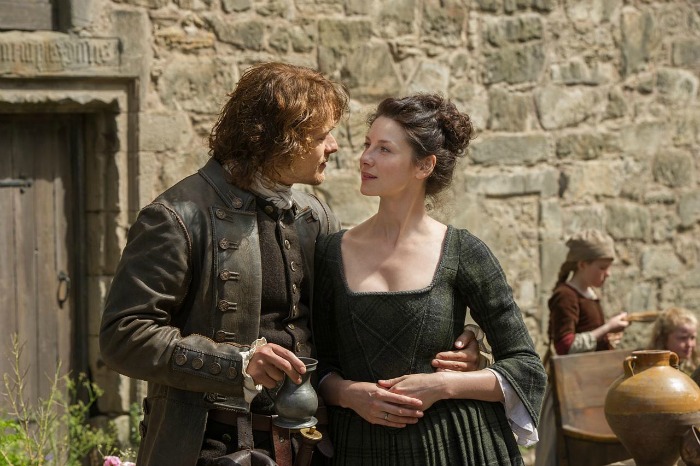 I wondered about what thoughts and emotions Jamie might have experienced when he touched his father’s coat for the first time since his death. Leather can absorb strong smells, like smoke or sweat. Perhaps Jamie held the coat to his nose, trying to absorb any faint, lingering scent of his father. I think everyone’s done that at one time or another in their life – recalling the scent (and associated memory) of someone who’s no longer in your life, or even someone you love and treasure in the here and now. Maybe Jamie inspected the coat, calling to mind a memory associated with a particular scrape or scratch. What did he think when he looked in the mirror? Did he shift his shoulders, allowing the coat to settle into place on its new laird? Did he have doubts regarding his ability to follow in his father’s footsteps? Did he remember how his father felt in his coat, warm and alive, when he hugged him at Fort William, not realizing it would be the last time? 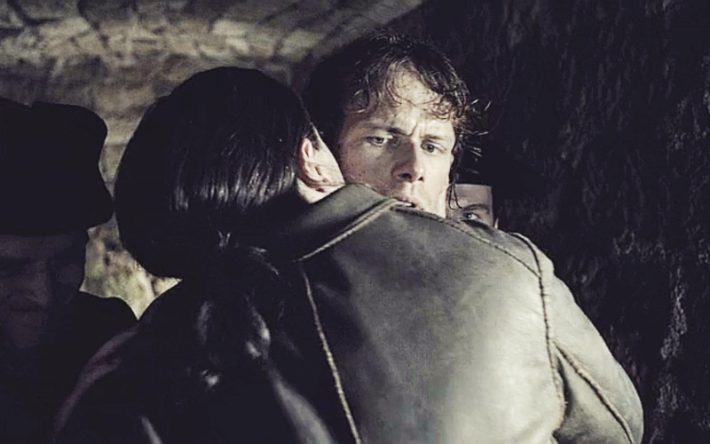 Jamie stands next to Ian as the tenants line up to pay their rents. He stands. It’s a position of authority, head-to-head with the tenants. He’s jovial and accommodating, and overplays his role as he tries to settle in. But he is the laird. If any of them had doubts, or considered Ian, that question has been answered by this unspoken display of leadership. It’s almost as if he’s saying, “this coat was my father’s and now it’s mine. The same goes for Lallybroch.” 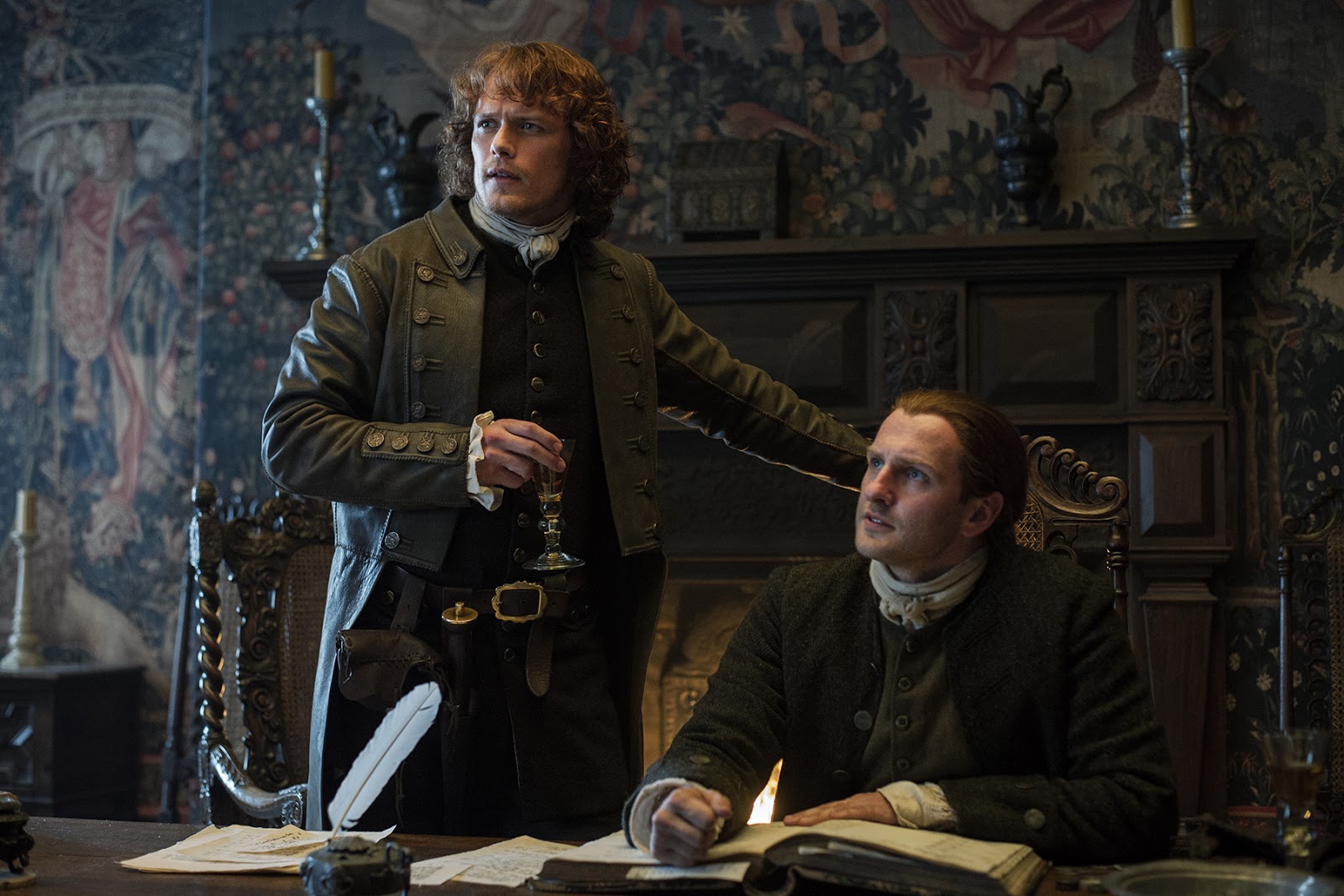 Further on in Season Two, the Fraser coat survives the “bitter disappointment” that was France. The Jacobite Rebellion will go forward and Jamie and Claire arrive at Crieff before meeting up with Prince Charles Stuart. Jamie wants to train the volunteers before marching to Perth. The men are farmers and cottars who probably never held a weapon in their lives. They begin in earnest, but the men’s hearts aren’t into it, and Jamie knows he must do something to inspire them.

Once again, he dons the coat. In it, he makes a heartfelt, no-nonsense speech. Suddenly, the coat takes on the persona of a military uniform, it’s wearer a man of significant rank. The men listen and are mindful of what Jamie is telling them. They understand the necessity of structure, drills and discipline. He has their full attention – and buy-in – until Dougal and his men decide to demonstrate a “Highland Charge.” 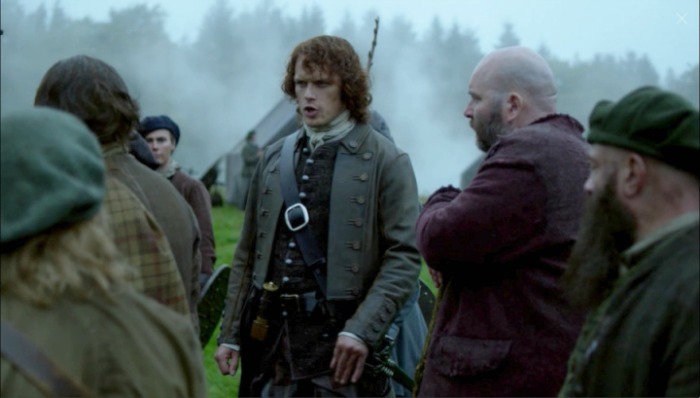 Dougal thinks he knows best when it comes to battles and fighting, and he wants Jamie to do things his way. Jamie stands tall in his Fraser coat, looking authoritative, confident and capable. He’s not backing down. He informs Dougal that the men are from the Fraser clan, which means they are his men, and if Dougal does not wish to abide by his orders, he can pack up and go home. The coat fuels Jamie’s essence of power, even against Dougal’s piercing glare and drawn sword. 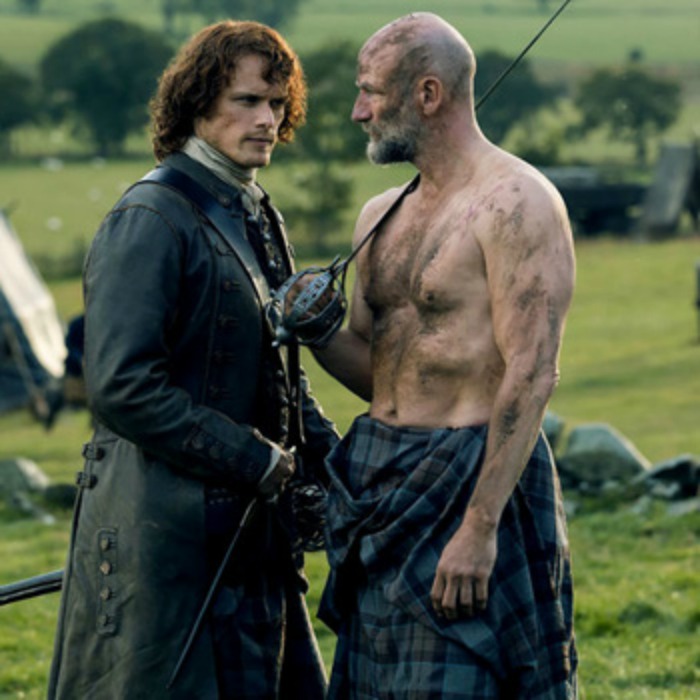 The men are as prepared as they can be, marching two-by-two from Crieff to Perth. Jamie rides at the head of the column, wearing the Fraser coat. He exudes power and confidence. He is in command, responsible for his men, and certain he’s done his best to prepare them for the battles ahead. 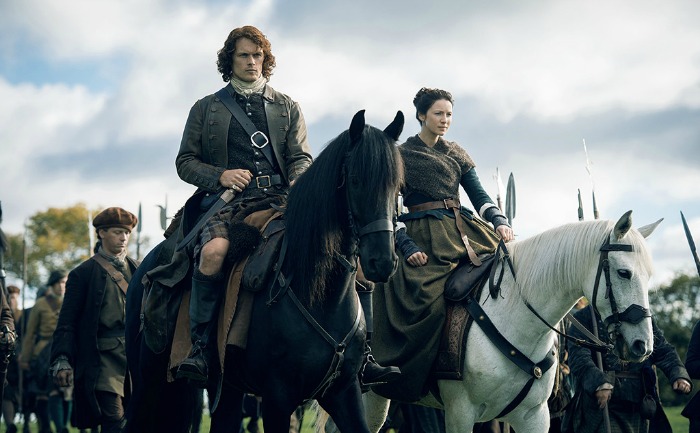 And soon the men – and, we the viewers – experience the first fruits of glory born from that training. Prestonpans is a success, as Claire predicted. But, also as Claire predicted and Jamie knows all too well, this victory is short-lived – the battle at Culloden lies ahead with a pre-ordained outcome unless steps can be taken to change the outcome. Wearing the Fraser coat, Jamie pleads with the Prince to wait for reinforcements and to give his men a chance to rest and regain their strength. Bonnie Prince Charlie’s gold-trimmed plaid is overshadowed by the well-worn life experiences of the Fraser coat – one that has certainly lived more relatable life alongside its men than any garment the Prince will ever wear. Jamie knows what he’s talking about, but the Prince won’t listen to reason and calls him his “Doubting Thomas.” 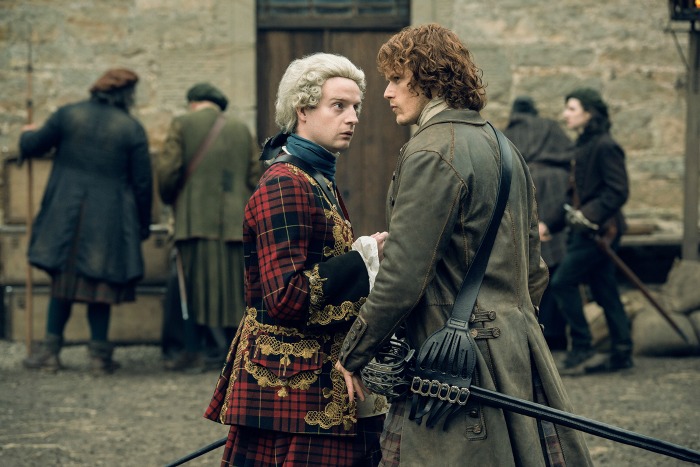 In the incredible 90-minute Season Two finale, we find that Dougal is dead, the battle of Culloden is about to begin, and Jamie brings Claire to the stones to send her back to her own time. If there ever was a time to put on your cloak of courage, it would be now. But wait, the Fraser coat has been replaced by a woolen jacket. Does the absence of this symbolic coat mean that all hope is lost? Will Jamie find and wear it when he returns to the field to fight his last battle, using its legacy to give him strength? Will he have it sent to Lallybroch for the next Fraser generation? Will we ever see the Fraser coat again? Who knew that one jacket could stir up so many emotions and conjure up so many unanswered questions that I, for one, will be anxious to see addressed in Season Three.
Do you think we’ll see the Fraser Coat again – twenty years later – when Jamie and Claire are reunited?