Tulach Ard: The Other Half of Jamie’s “Real” Ancestry

“Fair is fair”  so Jamie said in  ‘The Wedding”.  Now, don’t get too excited, this will not be a post rapsodizing about the writing, cinematography or acting  of  episode 107 because  most of us will agree, it was fabulous. Referring to my previous post, in which I explored the Fraser ancestry up to the Outlander timeline, it is only fair to give the Mackenzies a similar exploration, especially since they do have a huge presence, both in the book and  TV adaptation.

In the Gaelic, MacCoinneach  means son of the fair one.  It may be making a reference to a Celtic stag-like antlered deity, Cernunnos, Lord of the Hunt, associated with nature, fecundity, wealth and the underworld. The stag’s antlers are, not only the prominent feature of the clan chief’s crest, but also what he was called . . . Caber Feidh.  However, as we shall see further, there may be other, more plausible, explanations to the clan chief’s name and its association to antler imagery. The origins of this clan goes back to perhaps (depending on the source) the 10th century.  With the waning of Norse power in Northern Scotland, Gilleoin na h’Airde (aka Collin of Aird) takes control of Ross. A medieval Gaelic manuscript, MS 1467, reveals Gilleoin’s roots to the House of Dalriada/the ancient high kings of Ireland. Through him, three clans will emerge: Matheson, Anrias (Ross) and through his younger son, Gilleoin Og-the Mackenzies.

Even into the 13th century, much of the western coast of Scotland was ruled by magnates who recognized the kings of Norway as their overlord. However, this was continually challenged by the kings of Scotland. Offers to purchase ownership from the Norwegian king were thwarted; thereby, triggering more aggressive measures by Alexander III.  Finally, in 1263, Hakon Hakonarson, King of Norway, decides to reassert his sovereignty in the region. Based on a supposed charter, Colin Fitzgerald (aka Colin of Kintail) received the lands of Kintail for his service in the Battle of Largs. Presumably, this same Colin is also responsible for how the antler imagery becomes linked to the clan. Back in the days of Alexander II, those guys could not resist a good hunt – but as you all know after viewing episode 104, these events were not all fun and games. Real risk was ever present and stags can be quite aggressive, too.  Good thing Colin was part of this adventure, as he saves the king from a charging stag. For this, he is granted the stag’s head as his coat of arms. Although the Mackenzies do end up with Kintail, most historians do not attribute it to this particular Colin because there remains controversy over his  existence.  Although the accuracy of the tale may be suspect, it certainly highlights what the clan becomes at the height of its powers—the king’s men in the North.

The 3rd Baron of Kintail, Coinneach MacCoinneach (Kenneth son of Kenneth, chief from1274-1304) is the progenitor of the clan. Anglicanized to Mackenzie, it originally would have been  pronounced more like MacKenny. Earlier, the clan was subservient to  the Earls of Ross, but now hold lands directly from the king.  In the Scottish Wars of Independence, Kenneth’s son, Ian Murdoch shelters Robert the Bruce in Eilean Donan as he escapes the English and his rivals to the thrown, the Comyns; subsequently, defeating  them in the Battle of Inverurie (1308).  He played a pivotal role through out the struggle, adding his 500 clansmen to Robert’s decisive victory against Edward II in the fields of Bannockburn (1314).

One of the earliest written reference to a Mackenzie, a supplication for papal dispensation in 1465, was made by Alexander of Kintail and in 1471, he is witness to a charter granted by John, Earl of Ross and Lord of the Isles.  If you venture to what remains of Beauly Priory, the earliest (1492) knightly effigy of a MacKenzie can be viewed. Inter-clan conflicts dominate the Highlands throughout the 15th century. Territory meant power and wealth. For the Mackenzies, that essentially meant battling the Earls of Ross and Clan Munro in the Battle of Bealach naim Briog, aka Pass of Brogue, 1452;  siding with royal forces in 1488 against clans supporting the heir, Prince James, later James IV in the Battle of Sauchieburn (in the area of Stirling); fighting with the MacDonalds in 1491 in the Battle of Blar na Pairce (Battle of the Park in Strathpeffer, in the region of Ross and Cromarty; then in the Raid on Ross skirmishing with Clan Cameron and Mackintosh. Finally, to end off the century, in 1497’s Battle of Drumchatt, the MacDonalds give it another go but the Mackenzies win and maintain their hold in Ross-shire.  Phew…had enough of battles?  Just wait, there’s more.

Entering the 16th century, the clan’s extension to the eastern section of the Highlands further enhances their influence and power in royal politics. England was not out of the picture either. Although James IV’s Queen Margaret makes him related to England’s Henry VIII, this does not make for warm, loving family gatherings.  As part of Scotlands’ Auld Alliance with France and with Henry’s assertion of overlordship, James IV invades northern England. However, the Battle of Flodden (1513) ends with retreating Scottish forces, the death of their king, and a 17-month-old James V as the next monarch. Henry once again cannot “let it go”; this time, the royal matchmaker decides a marriage between his son, Edward, to the future Mary Queen of Scots is a match made in Heaven.  But this is not “Fiddler on the Roof”.  This matchmaker does not whine and nag you to agree.  Henry uses an army instead.  These battles of Rough Wooing culminate in the Battle of Pinkie Cleugh, (1547) in  the border region of  Lothian.  Although a military defeat for Scottish forces, Mary was smuggled away to France and betrothed to the dauphin, Francis (shout out to all the “Reign” fans). Fighting for his king, John Mackenzie, the 9th of Kintail, was captured but ransomed by his clan . . . believe it or not, with coos!! (via trade not bashing down the prison gates).  This says something of the respect and regard John had amongst his clan that despite harsh economic times, they gave up this highly prized commodity for his safe return. 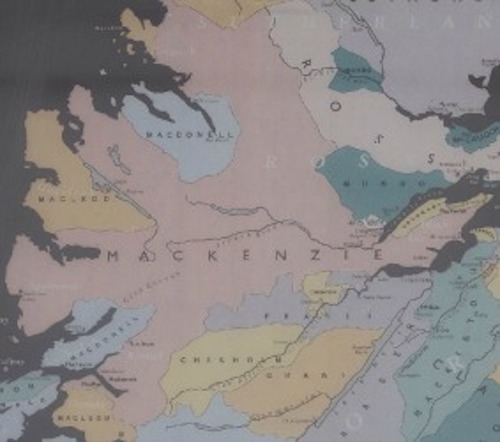 Clan dramas never end. When his father, Kenneth, died, John was too young to become the chief. So til he reached majority, his uncle, Hector Roy, was tutor of Kintail, his guardian, with all the powers of a chief.  As John’s majority approached, Uncle Hector was not too keen to give up his reign and so went about casting doubts regarding John’s legitimacy and abilities.  Thank goodness for John; he had a powerful maternal grandfather who smashed all of Uncle Hector’s ambitions—Hugh Fraser, 1st Lord Lovat.
With the first Jacobite rising of 1715, the clan united behind the Stuart cause under their chief, William, 5th Earl of Seaforth.  Joining the Earl of Mar’s forces against the clans Sutherland, Munro and Mackay who supported British authority, the end came at the Siege of Inverness.  The Mackenzies surrendered to none other then Simon “The Fox”, Lord Lovat. Remember him?  Escaping to France because of internal clan struggles for power, he joined the Stuart court in France working for the Jacobite cause. However, when the opportunity came for Simon to advance his own personal agenda he switched his support to the government forces. (see my previous post for more on Lord Lovat).

With the second uprising in 1745, the clan’s support was divided. The division within clans was not uncommon. William’s cousin, George Mackenzie, 3rd Earl of Cromartie was a staunch Jacobite. Opposing him was William’s son Kenneth, Lord Fortrose, who organized militia groups called Independent Highland Companies siding with the British government.  Although Outlander’s Mackenzies are fictional characters, the TV adaptation certainly touches upon the internal political divisions which certainly did exist.
Do you enjoy the historical realities and politics which are in the series or do you prefer that the production focus more on the romance, character development  or something else?