Since the news hit the Internet this summer that Viking’s actress Gaia Weiss was filming scenes for Season 2, Outlander fans and fan sites have been scratching their heads trying to guess which role she’ll play. And, no official word from Starz yet. Hmmm . . . so who is Gaia Weiss?

Weiss, a French born model and actress, is probably best known for her role in the popular cable drama “Vikings” – a show which also happens to be a personal favorite of Outlander showrunner Ron Moore. Her credits also include a role in the 2013 movie ‘Mary Queen of Scots” where she played a Scottish noblewoman and childhood companion of the famous Scottish Queen. Most recently Gaia played a lead role in the 2014 drama “The Legend of Hercules.”

It was in fact, fellow French actor, Stanley Weber who let the chat notre du sac (that’s “cat out of the bag”) when he tweeted the following and tagged Gaia.

There was a fury of speculation after this about Gaia possibly playing Brianna Randall given Gaia’s nearly 5’11 inch frame. However, fans quickly dismissed this possibility, especially since nowhere in the Outlander book series do Brianna and Stanley’s character, Le Comte St. Germain, ever meet. Gaia was asked directly on Twitter whether she might be playing the part of “Dragonfly in Amber’s” French villainess Vicomtesse de Rambeau. But, the reply was “no!”

After this a few photos showed up on Gaia’s Instagram and Twitter accounts of her in period costume and hair – possibly wardrobe fittings for Outlander. Interestingly, Gaia deleted the photos shortly after first posting.

A strong possibility is that Gaia could be playing King Louis’ mistress –Madame de La Tourelle. In Starz’ recently released “Dinner PR” photo, she can be seen sitting to the left of Claire Fraser at the fancy Paris dinner enjoying her la soupe. So, Mademoiselle, you are important enough to be invited to the fancy dinner, eh? 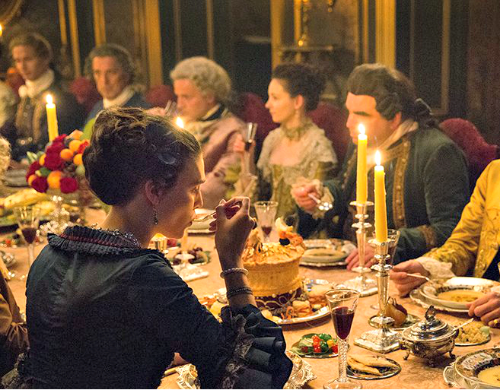 Photo courtesy: Outlander Starz
With no confirmation from Starz or the actress, I guess we will be left to wonder…Qui vous jouerez, Mademoiselle Weiss?

What is your guess for which Season 2 character Gaia Weiss will portray?