Patience is NOT a Virtue! 3 Burning Questions We Need Answers to NOW!

The Outlander Faniverse is filled these days with teasers and trailers and #OutlanderOfferings and Behind-the-Scenes photos and cast videos and award announcements and, and…so much more! The news posts on this Blog can barely keep up. It’s been a long, long, long Droughtlander and we are SO grateful and excited and bursting with Outlander love that we are eating up every crumb and every short bread laden morsel of Outlander news that comes our way. But, my patience wears thin on 3 BURNING QUESTIONS. First of all WHEN, OH, WHEN will we know who our Brianna will be??? Second, what is the Premiere Date for Season 2? And three, will there be a Season 3? Here’s what we know (and don’t know) about this trilogy of questions that require answers soon before the heads of Outlander fans everywhere explode in a burst of tartan…

BREAKING NEWS! We have our Roger! Scottish Actor, Richard Rankin will play Roger Wakefield. See more on the Blog! 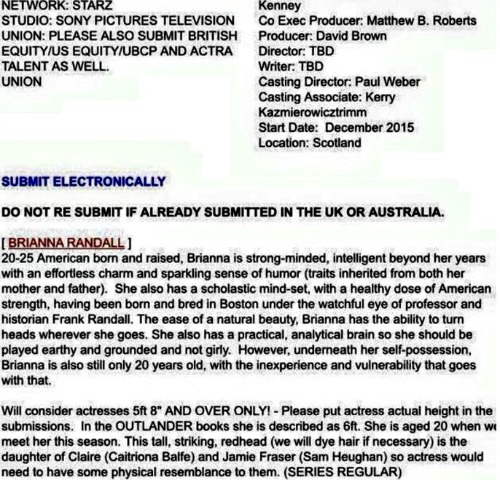 Brianna – The Casting Call went out in August…and there are dozens of actual audition tapes for the fiery red-head progeny of Jamie & Claire out there on the Internet for all to see. Personally, I have trouble watching these. I would likely make the absolute WORST Casting Director. I can’t sit through most of them. It’s excruciating for me to watch because I find it impossible to imagine any of these young women as our gal, Bree. If you are up for it, you can see many of the audition tapes here — Brianna Audition Tapes. Our Bree may be among these auditions or she may not??? Both book series author Diana Gabaldon and several TV series producers have confirmed that Bree (and Roger) WILL appear in Season 2. Diana recently confirmed this when responding to a Facebook question. 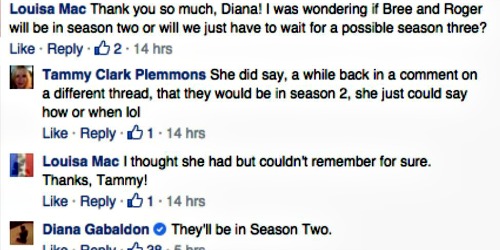 But, there has been a lot of speculation as to when Brianna and Roger will appear in Season 2. Based on some recent statements and interviews with showrunner, Ron Moore, it seems unlikely that the TV show will follow the non-linear lead of the book, which places Brianna and Roger in the first few pages of Book 2, Dragonfly in Amber” – everyone’s favorite “What the #&$!*#?” moment of the book series. FYI, non-book readers, it’s worth reading the books just to experience this moment! It does seem clear, however, that we will be seeing adult Roger and adult Bree, though, as opposed to baby Bree and slightly older Roger. Although, wish they would bring that kid back from Season 1 that played Roger. What a cutie!

It would seem, however, that the search for Claire was a cake walk compared to what has turned into an exhausting and down-to-the-wire search for Brianna Randall. As the cast shoots some final scenes in Scotland before taking their holiday break, the notorious Scottish weather there rages on with significant snow fall in parts of the Highlands and rain, wind and extreme cold in the Glasgow area and the Lowlands. So, one wonders if they will be able to shoot any outdoor scenes with Roger and Brianna (one iconic outdoor scene from the book comes to mind) as the Scottish Winter will remain in full swing once they return from the Holiday break. The unforgiving Scottish weather is one of the reasons they built the soundstage in Cumbernauld, and entirely possible they will use it to film end of season scenes with Bree and Roger BUT…it may not be that key scene I mentioned previously, but some variation on it.

And, speaking of future seasons. It would seem that everything is on track for a Season 3 except the official announcement from Starz. Showrunner Moore has been talking about Season 3 in interviews almost since Season 1 ended and Season 2 started filming. He’s mentioned that there are a few swashbuckling ocean and ship scenes in Voyager (upon which a Season 3 would be based) that he would LOVE to film, given his production company is called “Tall Ship Productions.”

I’m very hopeful. We’re talking about doing a third season now and I’m pretty sure we’re going to get it. I’ll be shocked if we don’t but you never know until you actually do it.” – Ron Moore (Scotland Now interview)

And, will Season 3 be split? Voyager is a long book with many, many plot twists and location hopping. There has been some talk of splitting the book into two seasons. No telling if this will come to pass. Discussions about this particular point may be what is holding up an announcement. Regardless, I am willing to bet the ink is drying on the Season 3 deal and the series’ three Golden Globe nominations has sealed it. Starz would be loony if they didn’t renew a series that has landed them on the top of the network nominations for this year’s Golden Globes. All I can say is you are going to have a lot of Outlander fans on serious suicide watch if Season 2 ends as expected and we have no Season 3 to look forward to. It won’t be pretty!

Lastly, when will Season 2 PREMIERE???? The Vegas odds have April as a pretty good bet. Will the series continue on Saturday evenings? It would seem so, since the Starz series “Black Sails” has already announced a premiere date in January and sits in the 9:00 p.m. ET Saturday time slot. It would seem logical that Outlander would take up that space once Black Sails’ season ends. So, here is my guess…

The Premiere for Outlander Season 2 will be…APRIL 16th. This just happens to be the Anniversary of the Battle of Culloden, but I am not picking the date because of this. It would just be a happy accident for Starz and all associated with the Show, including the fans. I would expect we get the Premiere date announcement sometime after the 1st of next year with season promos beginning in late February. April is not soon enough but we are at the mercy of the studio and the network not to mention a few months of post-production work. Bring it on, though. Patience…HIGHLY overrated!

What is your prediction for when Season 2 will come back to air? Do you think Season 3 will happen?