Wow. I thought I’d seen the last of Laoghaire, that trouble-making, scheming, two-faced —–. Good riddance, and all that. You get my drift. Yet, here she is, in “The Fox’s Lair,” at Castle Beaufort, the home of Jamie’s grandfather, Lord Simon Lovat. How did she manage to get this gig and does she know that Jamie’s going to be there? This lass doesn’t give up!
When Claire and Jamie arrive, they encounter Colum MacKenzie (who explains the reason for his visit) and that unfortunate witch trial thing comes up again. Colum denies any involvement and states that Laoghaire’s actions were a “gross overstepping of her place.” He had her beaten and was ready to have her banished until Mrs. Fitz (her grandmother) pleaded on her behalf and assured Colum she’d keep her in check. So, did Mrs. Fitz and Colum decide it was a good idea for Laoghaire to accompany Colum on his trip to Castle Beaufort? Why would they reward bad behavior with an extended vacation away from the drudgery of Castle Leoch? Did either of them know that Claire and Jamie would be there? Is Mrs. Fitz trying to give Laoghaire another chance to snag Jamie? Am I reading too much into this? Perhaps, but it’s fun to speculate.
If Laoghaire didn’t know Jamie was going to be there before they left Castle Leoch, she heard about it when she arrived, because when she finally catches up with Claire, she tells her she’s been looking all over for her. Why? To apologize, of course, for that nasty bit at Cranesmuir and let Claire know that she’s turned over a new leaf. Yeah, right. “I’ve changed,” she says, and explains that God has brought them together here at Castle Beaufort so that she can make amends to Claire for what she’s done. She’s on her knees, looking all pious and contrite, but Claire’s not buying it. Cue the crocodile tears and score one for Claire – she’s no fool. 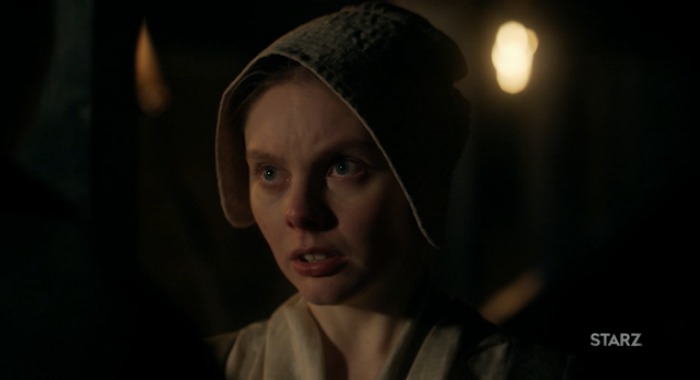 Claire tells Laoghaire she’s fantasized about all of the ways she’d seek revenge on her for what she did to her (accusing her of being a witch, testifying against her at the trial, putting an ill-wish under Jamie and Claire’s bed, and trying to seduce Jamie, for starters). When Claire was about to be beaten at the trial, Laoghaire told her she’d dance on her ashes after she was burned at the stake. She’s just not the kind of lassie you’d forgive on the spot. I wouldn’t, that’s for sure.
Claire tells Laoghaire she doesn’t hate her, but pities her. She talks about the dark places Laoghaire inhabited to try and get something she’ll never have (Jamie). Claire is too kind and revealing when she talks about what a successful marriage/relationship is – I wanted to shush her. It felt like she was giving Laoghaire ammunition that is going to come back and haunt her.
While at Castle Beaufort, Laoghaire’s supposed to take care of Colum’s laundry and help out wherever else she’s needed. Laundry detail that includes at least one item that belongs to Jamie – his shirt. 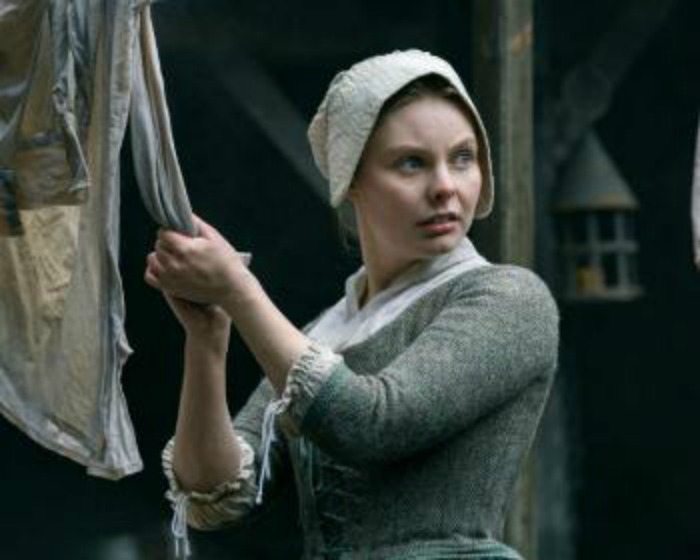 No, she’s not over him, and Claire should have picked up on that straight away. Laoghaire says she didn’t do anything (to the shirt). Either Claire missed this red flag or chose to ignore it. Perhaps ignore, because she needs Laoghaire’s help. She tells Laoghaire, “Jamie will never love you, but there may be a way to earn his forgiveness.” Laoghaire’s ears perk up and she’s 100% on board before she knows what is being asked of her, because Claire agrees to speak to Jamie on her behalf. A step in the right direction for Laoghaire – a good word from the wife herself! This manipulation by Claire made me uncomfortable. She knows what Laoghaire’s feelings are towards Jamie, and yet she gets Laoghaire’s buy-in by using her affection for Jamie to get what she wants. It’s twisted and unfair, and could be something Claire may come to regret.
Laoghaire’s mission is to flirt with Simon the Younger and boost his confidence so that he will change his father’s mind about supporting the Jacobite cause. Laoghaire’s not experienced in the finer points of flirting (to be fair, Young Simon looks like a bit of a challenge), but she seems to have bolstered Young Simon enough to stand up to his father and support Jamie and the Jacobites.
Departure day has arrived with Jamie and Claire readying their mounts for the ride back to join Murtagh, Fergus and the Lallybroch fighters. Claire asks Jamie to go and thank Laoghaire. “Why?” he asks. Claire says she’ll explain later (road trip conversation, I guess). Jamie agrees, and tells Laoghaire ‘thank you’ although he doesn’t know why. She says, “I hope one day to earn your forgiveness.” He bows and turns away, missing what Laoghaire adds, “and your love.”
Have we seen the last of Laoghaire? Somehow, I don’t think so. Just thinking about it sends chills up and down my spine.

Considering the changes made to Laoghaire’s story arch in The Devil’s Mark, do you think her attempted redemption here is necessary?  If so . . . was it successful?